A forgotten danger that lurks in the darkness.

Zerahk is a Rahkshi that wields the staff of darkness which it can use to make its opponents see nothing but blackness, its enemies scream in anguish as they are blinded. Zerahk is highly intelligent and favours ambushing its opponents when they least expect it, it is constantly on the move, covered in shadows, while searching for its next target.

Zerahk is controlled by a Shadow Kraata, Making it capable of infecting targets from a long distance.
Zerahk is believed to be only a myth. 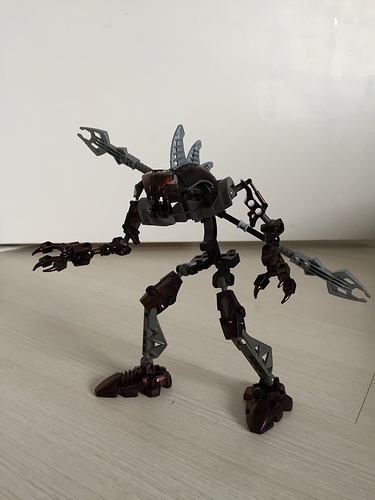 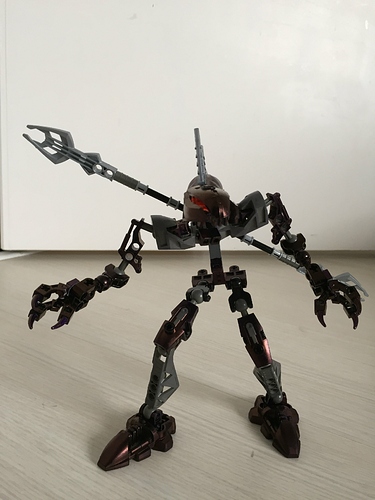 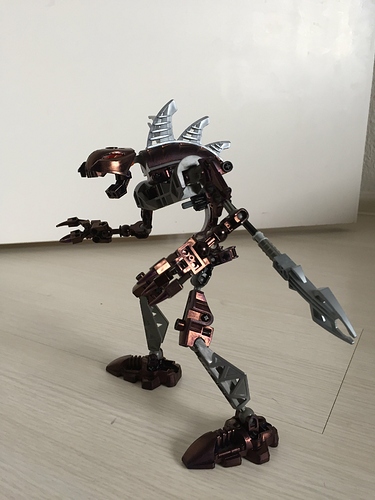 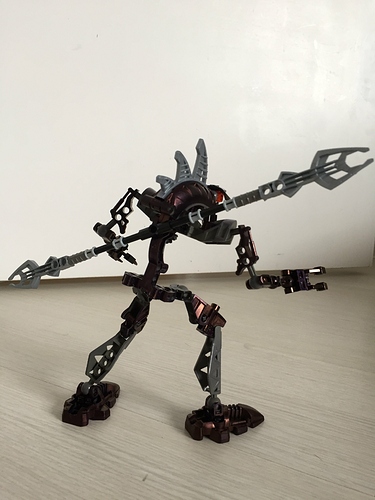 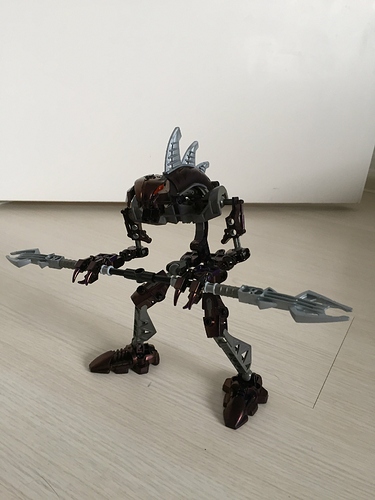 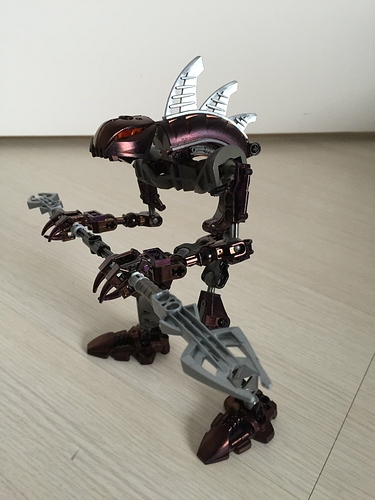 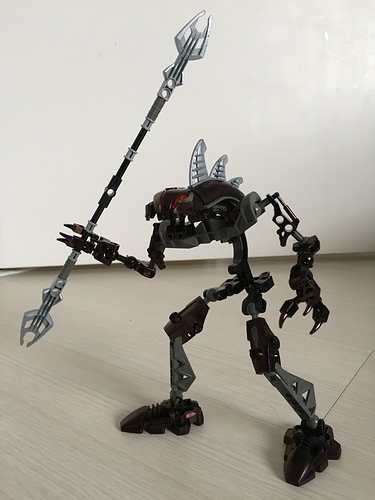 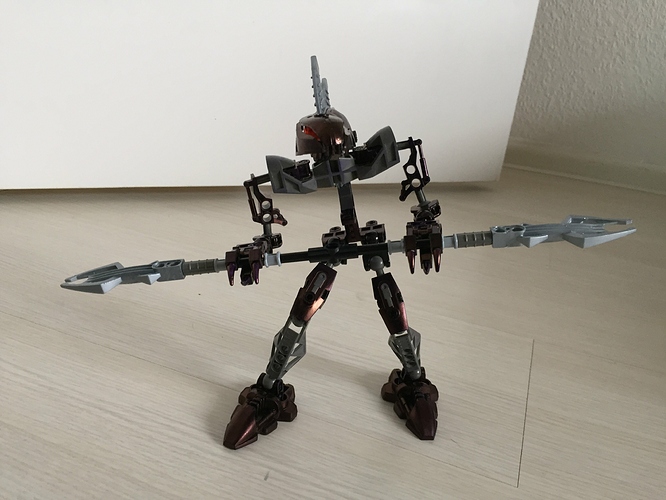 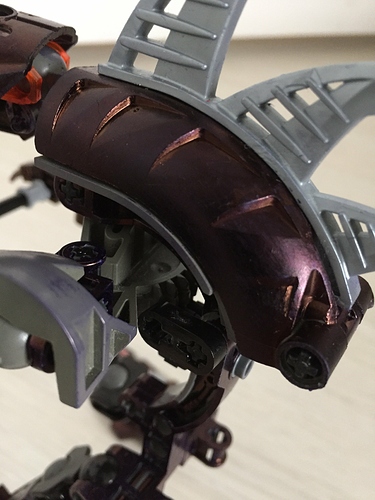 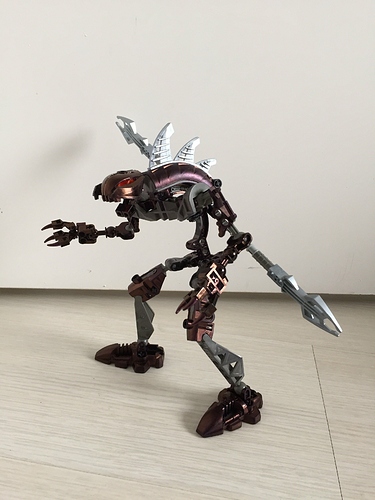 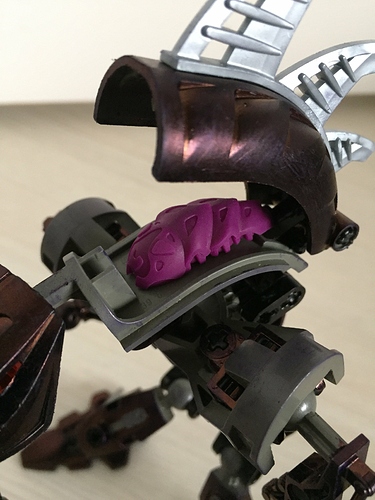 The head can open and close.
Added forearms and longer upper legs allowing for more articulation and better posing.
Custom hands with posable fingers that fit right inbetween the two grey pieces in both parts of the staff which allow it to hold it without it falling out of its hands.
Two pieces in the back make the torso lock in place after you turn it as to avoid it swinging around while posing or playing with it.
A tiny axle in the back locks the piece holding the head and Kraata in place so you don’t have to worry about it moving once you open the back for switching/taking out the Kraata.
Has a tiny piece in the back that the staff can be attached to, allowing Zerahk to carry it on its back

This is my first own thought of character alswell as my first time painting, had to do it by hand but was very enjoyable. Would love to hear everyone’s feedback!

This is really cool. The paints(?) are especially impressive.

Thanks! It took a while to colour it but it certainly was worth it!

Pretty good for a basic revamp, what kind of paint was used for the recolored portions?

Thanks! Funny thing is that I used a CD marker, not the best for colouring but it gave it the look that I wanted it to have and it sticks very well to the plastic, even when you firmly grip it.

Nice. You might want to topcoat it though to retain the paint/ink on there longer.

Nice. You might want to topcoat it though to retain the paint/ink on there longer.

Thanks for the tip!

How do you build that head? I love it!
I know you have to cut the pieces, but I really want to make a replica of it!

Thanks! Here is an image that can hopefully give you some insight: 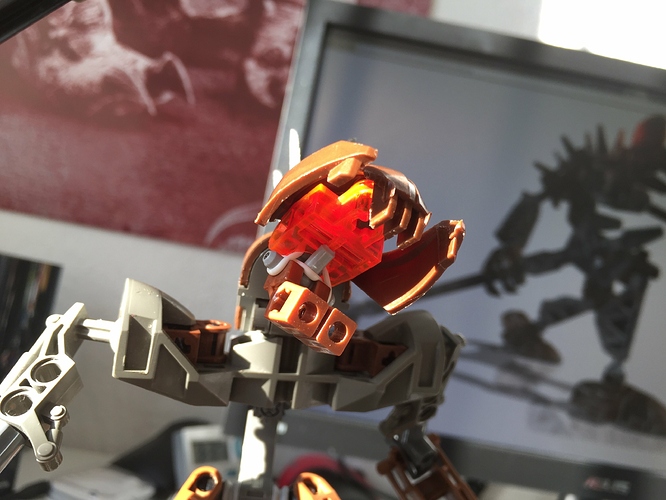 You take an elastic band and put one end around the axle in the Rahkshi head and put it between the place of the transparent piece where the piece connects to the ball joint in the body, then you take two robot arms and put them on the lego piece with the three attachment points, now you fold the elastic band around it like in the picture.

Cool!
But how do you get the head-opening thing to work?

The two parts at the side sadly have to be opened and closed by bending them a little, it doesn’t seem to harm it though. I hope to one day be able to make custom pieces for it so they can connect to the transparent piece and rotate. The robot arms just have to be rotated.

You could also lock the elastic band behind the transparent piece instead of the Rahkshi head axle. Doing this will let you just easily switch between the Rahkshi head with opened sides and an uncut one with closed sides. After switching you would only have to move the robot hands.