Formerly an Onu-Koro Guardian and lightstone miner, Kaj is now the stoic hunter of a new Toa team.
(See end for information on the Toa Project.) 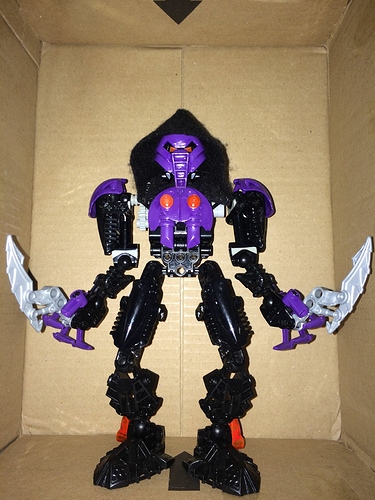 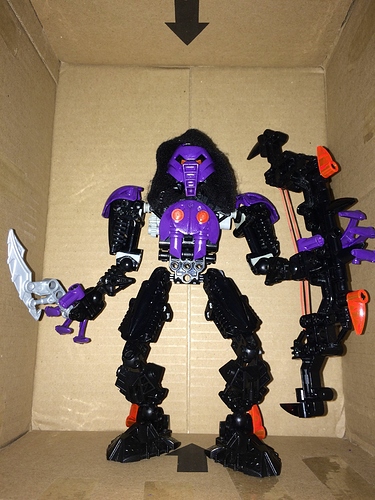 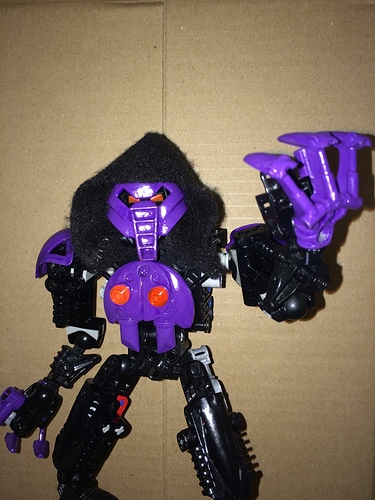 IMG_3685[1].JPG2448×3264 2.04 MB
My style is to keep MOCs simple but creative, such that they look as much like real sets as possible.
Unfortunately, I’m not very good at sewing felt hoods. Other materials are available.

The two major custom parts of the body are the upper arms and legs: 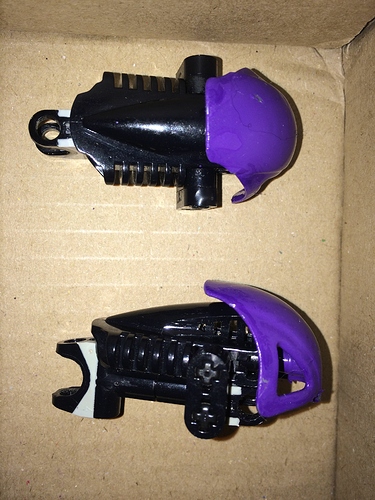 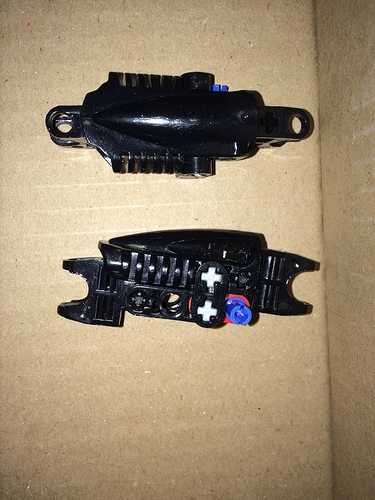 The torso is built from an upper and lower Vahki torso piece. The upper torso piece works particularly well with my gearbox design. 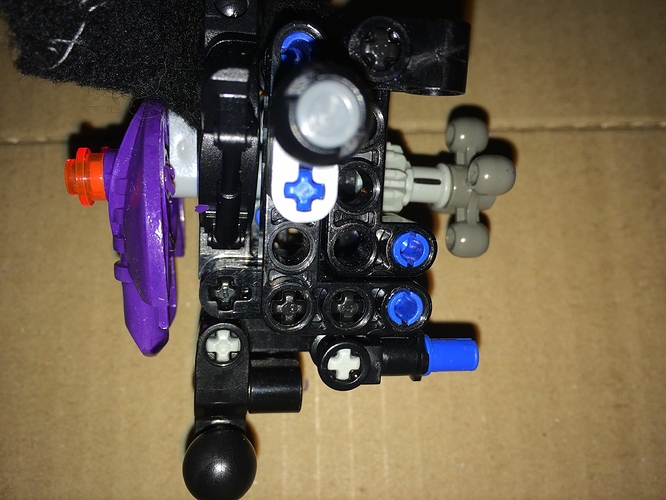 #Weapons and Functions
Kaj carries two daggers, a bow and an arrow: 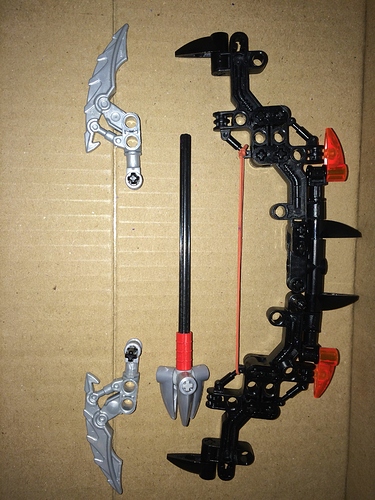 The arrow slots through the bow as shown below. Using the rubber band, the bow can be used to launch the arrow (more effective than you would think). 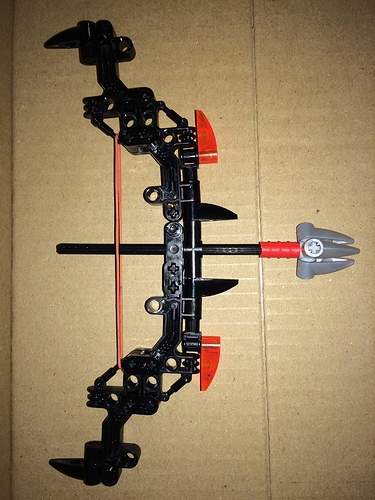 Using modifications to my compact gearbox design (see here), the right arm (but not the left) can be turned. Ball joints allow the arms to move independently. 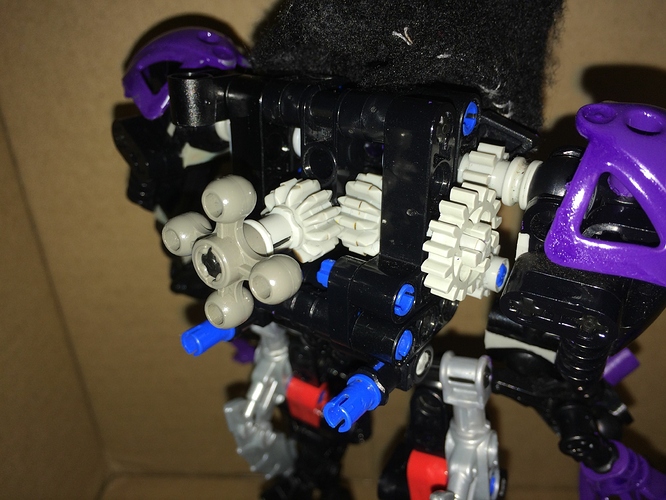 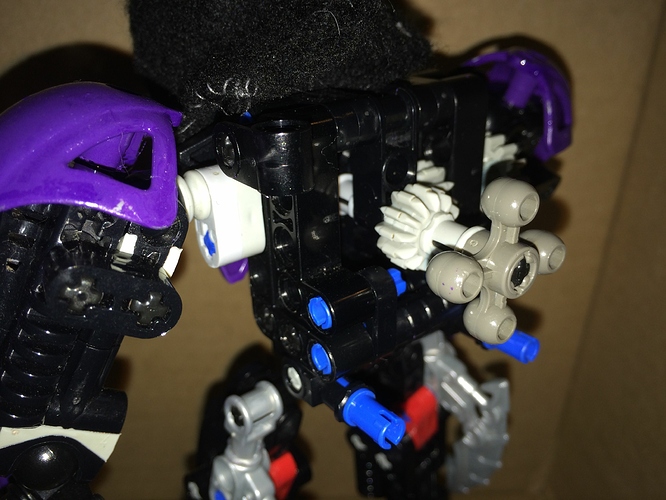 All of the weapons can be stored on Kaj: 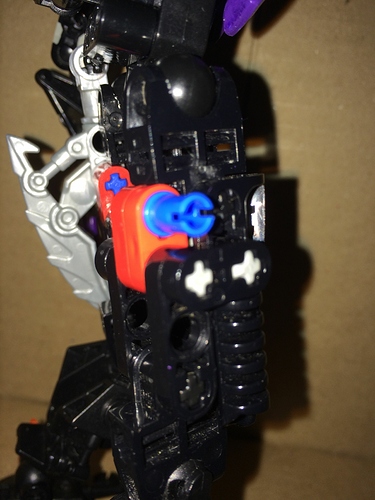 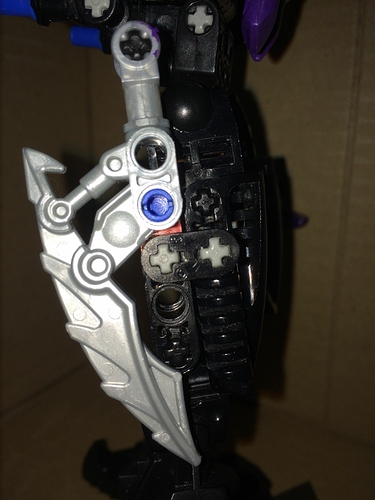 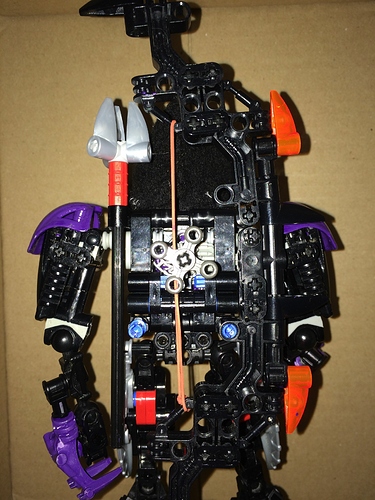 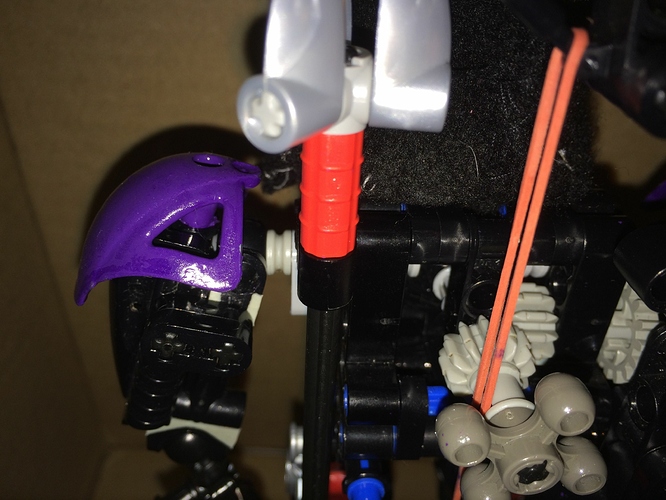 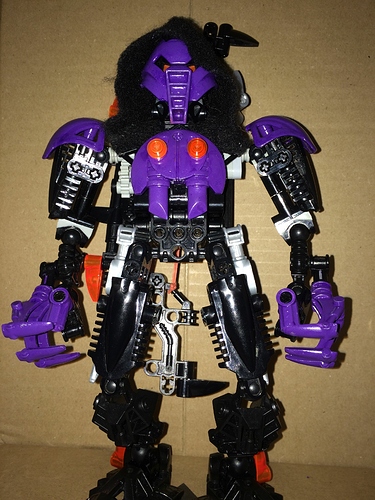 Here he is with everything stored.

You might have noticed that the hands / claws aren’t connected in the usual fashion. 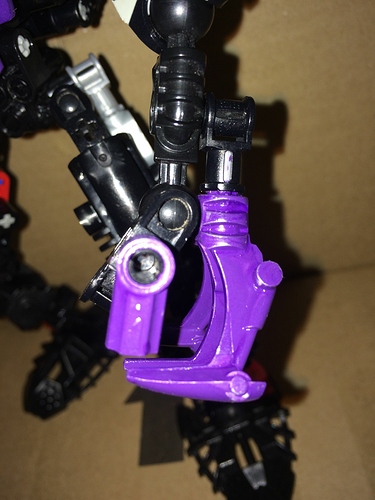 IMG_3688.JPG2448×3264 1.58 MB
This setup positions the claws in a more realistic way, and also allows for thumbs to be added.
Weapons are added using the top axle hole on the hand piece which, when utilised, creates the impression that weapons are actually being gripped when attached. 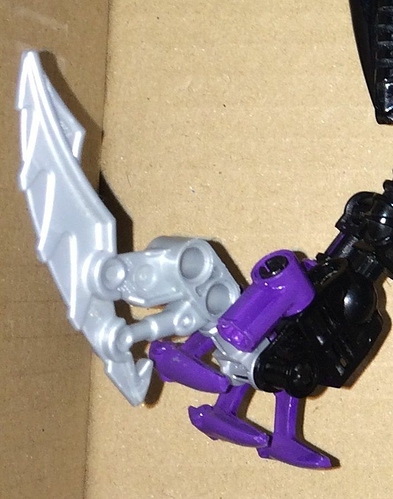 I had to get a bit creative when attaching the bow since the system above doesn’t work very well with it. 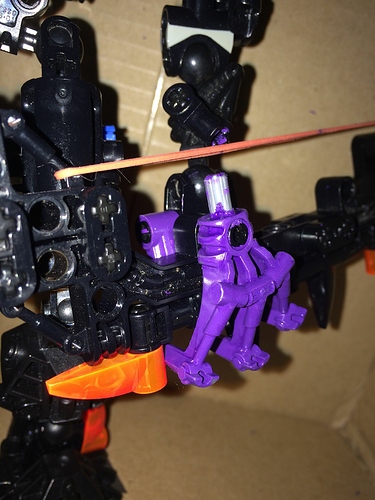 #Colours
As this is also my self-MOC, I thought I’d use Kaj as he possesses both my favourite mask and colour scheme.

The purple pieces are custom-painted. 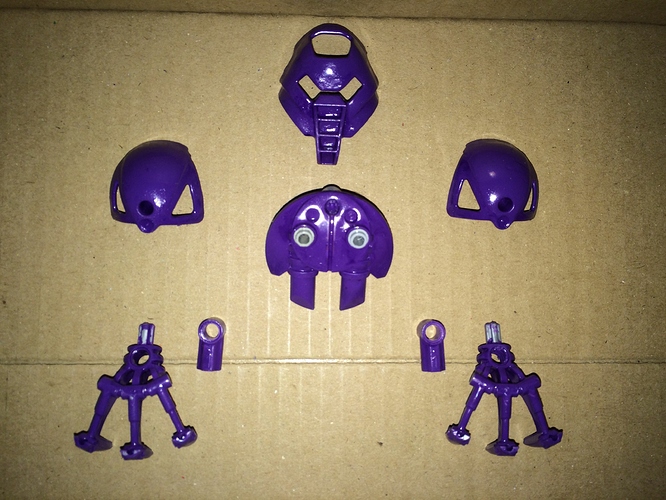 I tried my best.

#The Toa Project
Following my completion of this MOC, I decided to create an entire Toa team using existing characters, taking great inspiration from the sets and stories of the 2001-2003 era of Bionicle.
All of my designs will have a unique function (I think you’ll like my next one), whether they be gear-based or not.
Each time I release a new Toa, I’ll reveal the next.

Please leave comments and suggestions for improvement for Kaj and the coming Toa MOCs. Once I’ve completed all six Toa, I’ll address any criticisms and share the improved Toa in a single post.

#Next Time: Hafu, Toa of Stone 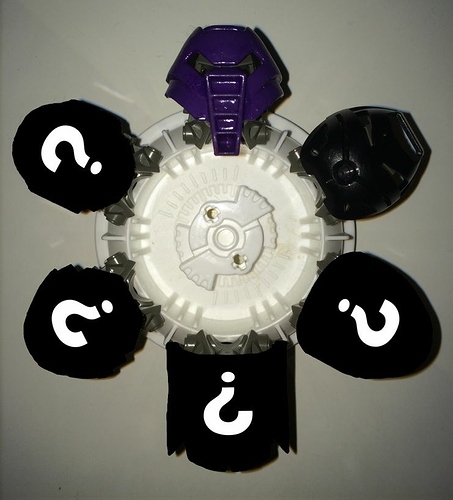 First off: OMG PURPLE!
Anyways… hood looks really nice, red seems a bit off (due to it not being on the body. At all.) The recolors are definitely nice looking. Though… the chest seems ridiculously small compared to the limbs.

7.5/10 would see again (Actually would like to see more, but that doesn’t rhyme)

Not a fan of the glowing orange nipples. Otherwise a 9/10 from me! Love the bow’s design.

I think it’d be nice if he had a few more trans-orange details, as opposed to just the bohrok eyes on the bow, the ‘nipples’ and his actual eyes. Adding some purple on the legs would also help the color scheme out a bit, I think. The Torso could be a bit bulkier, especially since he is a Toa of Earth, who are often displayed as physically very large and strong. If you’re going against that on purpose, that’s fine, but I still think adding a stud or two of height to the torso and maybe making room for some armor on the abdomen in that way would do the appearance of the MOC good.

Positives, though: first off, even though every other MOC seems to have a bow or variant of a bow these days, this is one of the few that actually works, so props for that. The hand design is great too, especially since it allow him to ‘hold’ things securely without having to mess with all the fingers. The gearbox looks like a nice construction, and earns extra points since most MOCs are purely display models that don’t include a function of any kind. Since you’re only using painted parts for the purple, they don’t look out of place in the color scheme the way painted parts sometimes do.

In all, minus one or two little foibles I think it’s a very nice-looking MOC, and I like the rogue-ish vibe it gives off. I look forward to the rest of the Toa Project!

This looks more like a toa of gravity given the colors,
I think the build looks pretty nice though.

I was hoping someone wouldn’t make that connection. They don’t look like it in person, I swear :

The torso seems a bit small compared to the limbs, but overall this is a pretty nice MOC.

Thanks for the comments. I might consider painting the lower torso to make the body look bigger (since only the chest armour on top is purple, it does make the chest seem small).

The MOC was originally just a self-MOC and not a Toa. Since I was going for a hunter aesthetic beforehand, I stuck with it. I’d argue that he looks quite broad-shouldered like an Earth Toa, and I suppose his compacted torso kind of makes him look a bit more hunched, though the design does stray away from their stereotypical figure. This is something I’m unlikely to change.

The set was originally orange. Back then, the legs looked weird with the technic blocks in orange, though this might look less jarring in purple. I’ll consider colouring them.

If you find the orange studs too obnoxious (i.e. if you can’t dismiss the idea that they’re nipples), I’ll consider removing them, though I feel they help distribute the orange well.

Once I’ve finished all the Toa, I’ll repost them as a set with any suggested improvements addressed.

It looks great, but I’m not a fan of the orange.

He looks alright. The torso could be longer, though, and the orange either needs to be more prominent and spread out or not there at all.

First off
Great Idea,having some of the Matoran of mata nui being made into a Toa moc is just Amazing!
2nd,
Purple and Black is a nice color scheme and the Hood is phenomenal!
8/10
Can’t wait to see Hafu as a Toa!
P.s. I’m Guessing that Kopeke is going to be the Toa of ice…

I like the colour scheme, also the Huna! So nice job!

Sadly not. I wanted to use Matoran whose masks aren’t the same as their respective Toa Metru. That way, this team would feel a bit more unique.
Thanks for the comments

How far does the bow and arrow shoot?

I’d say at least 8ft. Depends how far you pull the band back.

awesome! cant wait for the other toa!

Update:
Sorry for the delay for Hafu. I have his build sorted. Just have to wait for the correct coloured parts from BrickLink.
Christmas deliveries won’t resume until Tuesday so this will be the earliest I’ll be able to post.
The other Toa should follow shortly afterwards since I’ve had time to build the next two.