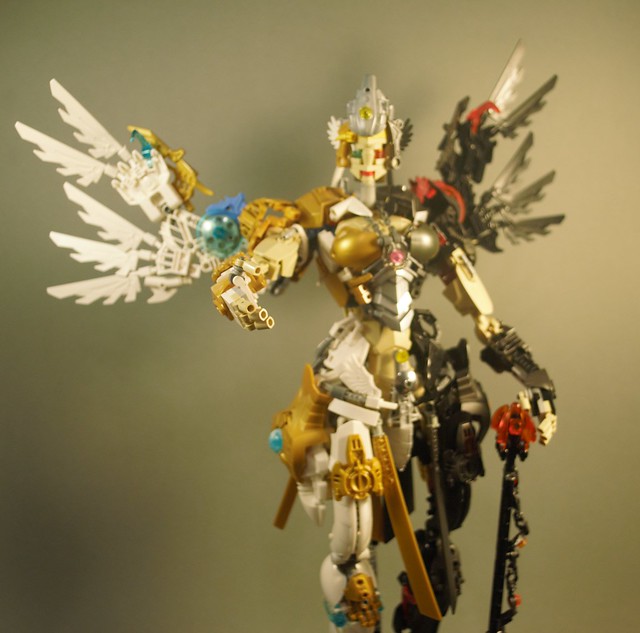 Welcome to Valhalla, Warrior by Mohamed Marei, on Flickr

Here stands before you the mightiest of the Valkyrie, the one who watches over the balance between Light and Darkness, the Emissiary of Chaos. Her name is Altheona, the Twilight Valkyrie

A noble warrior, versed in the arts of chaos, and capable of unleashing tremendous power to vanquish her foes, and restore the balance between the Light and Darkness when under threat. 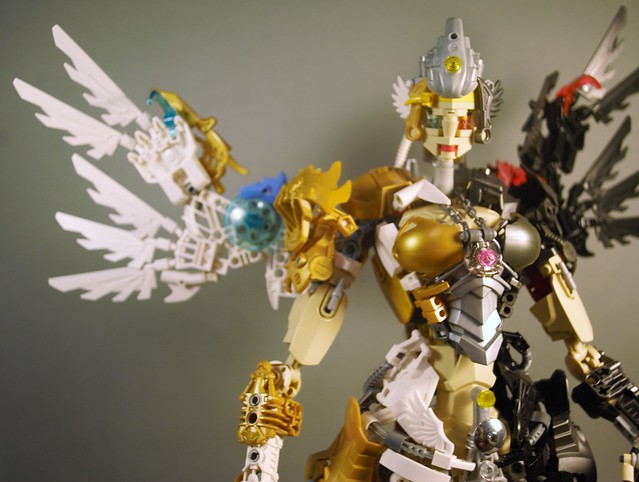 Armed with an arsenal of mystical weapons forged with the very essence of those powers, Altheona is a skillful combatant when the need arises. She can summon the weapons and fluidly transition between their combinations for maximum effect. Her Seraphic Spear and Shield of Virtue are her primary response to the minions of darkness. She can also call upon the shadows to bring forth her Hellforged Mace and Demonic Shield to eliminate transgressors who serve the Light." 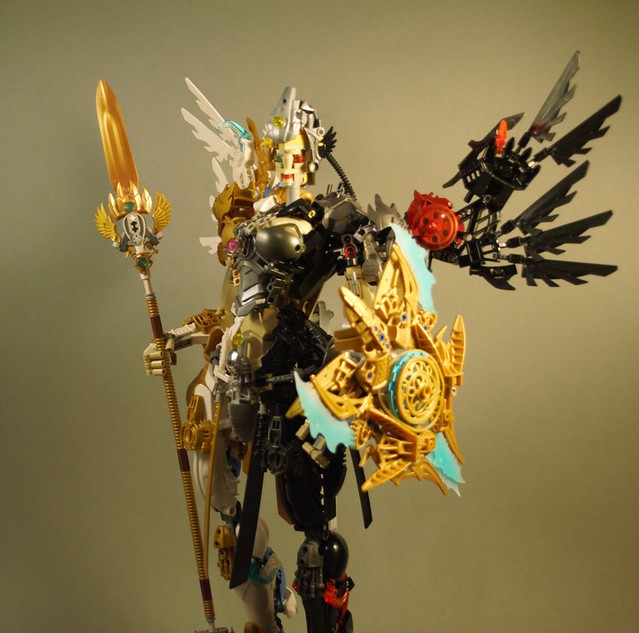 Twilight Valkyrie - Sporting her Seraphic Spear and Shield of Virtue by Mohamed Marei, on Flickr 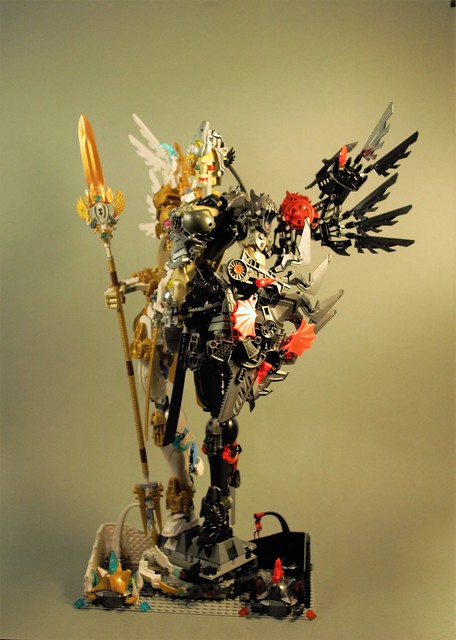 Twilight Valkyrie - Holding her Spear and Chthonian Shield by Mohamed Marei, on Flickr 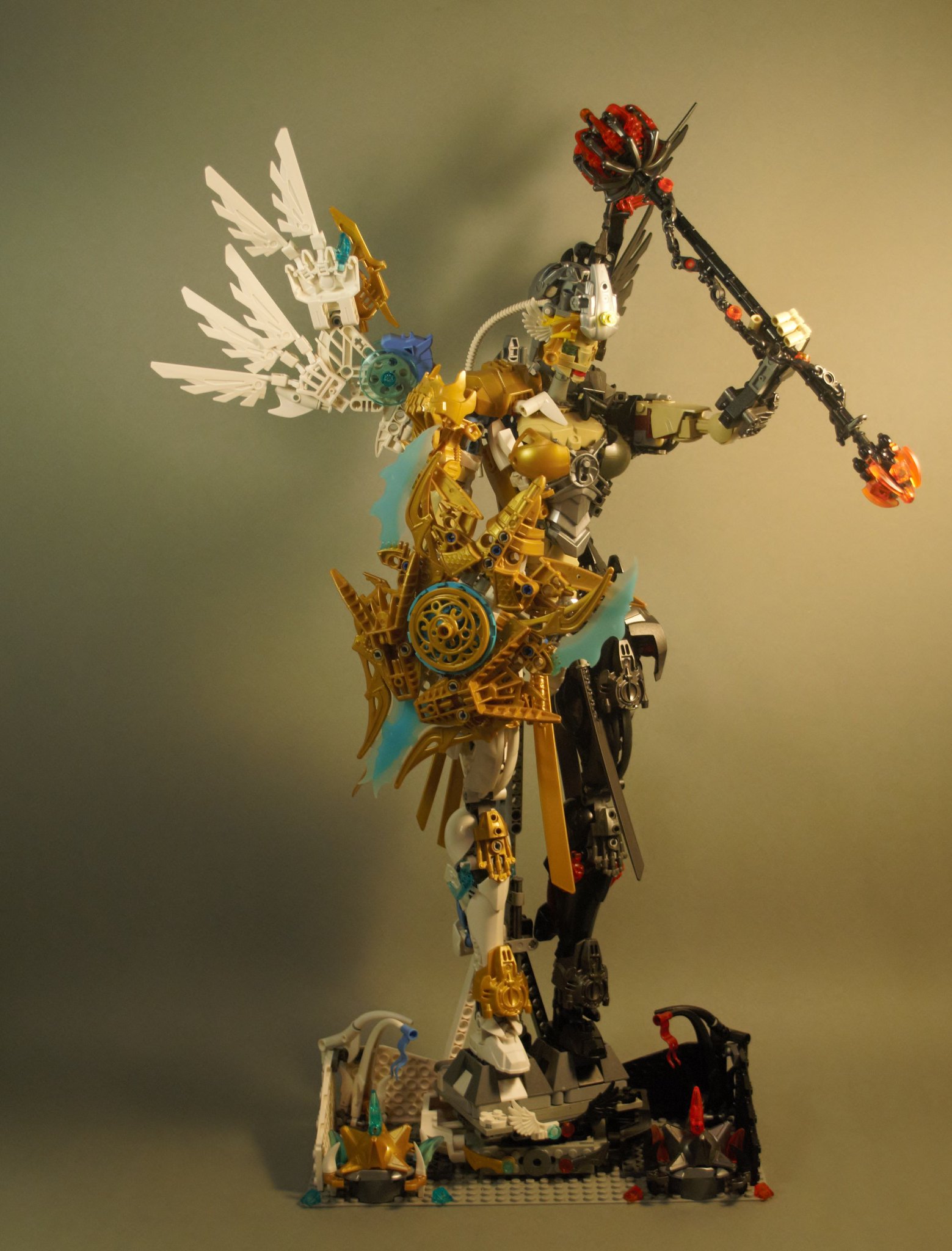 Twilight Valkyrie - With her Hellforged Mace and Shield of Virtues by Mohamed Marei, on Flickr 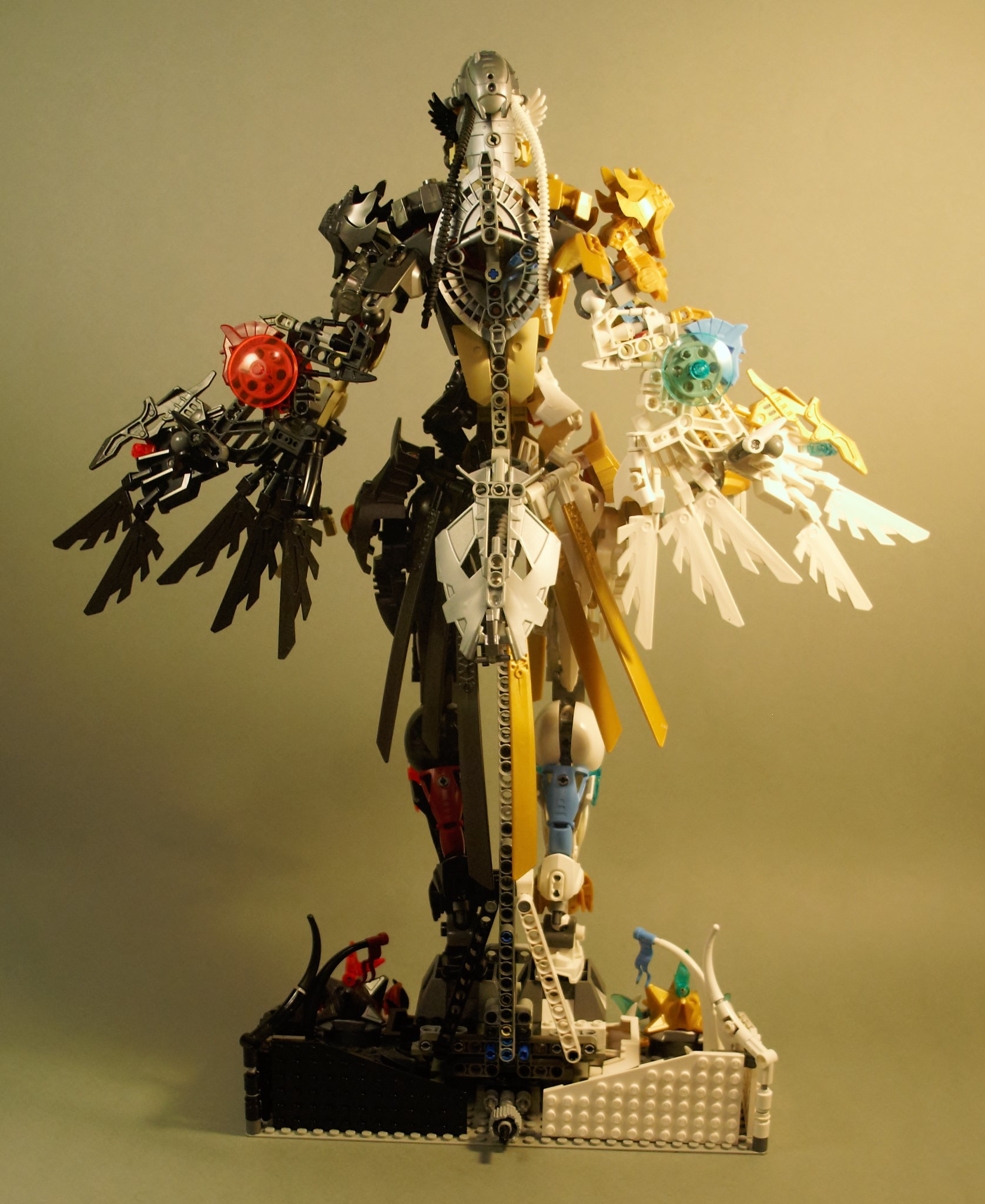 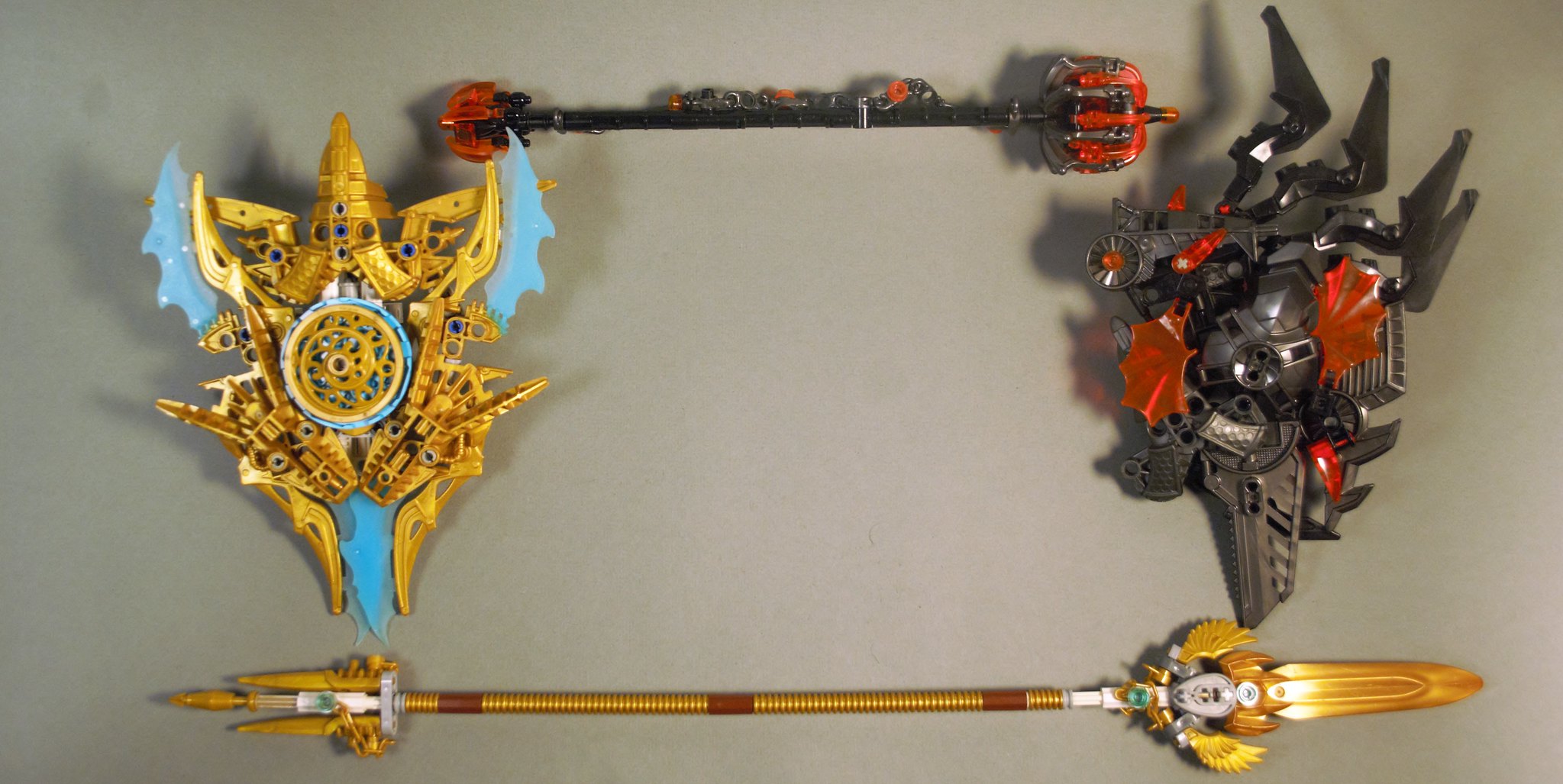 How overdue is this though!

For those of you who have been following me, you will have seen WIP’s of this for several months. At some point I was done with it and I figured you guys might want to see it. So without further ado, here’s a preview of my most perfect WIP to date: the Twilight Valkyrie!

I took a whole lot of (subconscious) inspiration from chaos-themed Yu-Gi-Oh! monsters, such as Black Luster Soldier - Envoy of the Beginning, BLS - Envoy of the Evening Twilight, Tethys, Goddess of Light, and several others.

I have always been fascinated with the concept of perfect asymmetry, that splits a being completely between light and darkness, or any other similarly conflicting powers or phenomena. I have attempted several such MOC’s in the past, such as Darklight Paladin and Draxx, Return of the Magnetomenace. I have also created an LDD collab with TheOneVeyronian depicting this concept as a chess game.

So there you have it! I hope you guys have enjoyed looking at this MOC, thanks in advance for likes/comments, and stay tuned for some more pics coming soon! Happy Holidays!

This is amazing. Great job

Spectacular in both concept and execution

Dang dude! this looks fantastic!
My only complaints are that the head is too small and the arms too thin compared to the rest of the MOC.

This looks amazing, though some parts look overly greebly

I admit, the textures are a bit funny throughout but the colors slightly overcome that issue. I might consider de-texturizing everything at some point but as it stands I’m quite happy with how it turned out.

That moment you click on a topic and you just sit there starring at the first picture for 30 seconds.

Everything about the moc is great. The head just isn’t really working for me.

The head was one of the hardest aspects of the MOC. I couldn’t bring myself to give it a monochromatic head, such as a mask. So the obvious solution was to go custom.

TBT, the head doesn’t look out of proportion outside of pictures. I do think it’s a unique design which could be further improved, but I’m actually satisfied with what I’ve got (also, considering this whole shabang has been in the works for over 9 months!).

Thanks for your input, and I’m glad you enjoyed my MOC!

I can’t comprehend how people work on mocs for months at a time, my mocs are usually done within a day or two, I commend your effort.
Though I have to say that the waist is a bit of a cluttered mess, and the thighs are, awkward, there doesn’t appear to be a back to them.
As well, the arms are very skinny, and the head is too small.
Also from a design standpoint the supposedly demonic shield doesn’t look demonic in the slightest.

@Payinku You raise some valid points, but I think you ought to wait for some more pics to allay your concerns.

With respect to the thighs, no they’re not very awkward looking from the back, since a skirt covers most of them up anyway. And besides, they actually have considerable substance from the back.

Also, which demonic shield are we talking about? The shield she has in the picture is the Shield of Virtues, as explicitly stated in the link right below it. The Chthonian Shield is the one that appears in the other photograph on Flickr, which -granted- you will not have seen.

Thanks for actually going through the whole post though! I don’t know of anyone who reads posts at that level of detail

Their been alot of “Twilight” based moc I’ve seen, this is one of the best for awhile.
The construction is complex but messy in some areas.

Are you some kind of god or something?

Well that’s what kind of happens when you build something of that size (seriously it’s a lot bigger than you might think).

Also, not to brag or anything but I’ve been building twilight-based MOC’s before they were cool XD

That shield reminds me of the glass shield from Skyrim. And anything from skyrim is a plus in my book :>

@Ven needs to see this