This unnamed water-dwelling species typically lives at the bottom of the deepest oceans, deeper than most surface-dwellers have ever gone, and few have seen it. Untold years ago, one was modified to be able to survive near the surface, though it is unknown by who – perhaps the Dark Hunters, the Order of Mata Nui, or even the Gresh Beings themselves. Viex himself doesn’t know – or doesn’t claim to know. He keeps mostly to himself, prowling the seas. 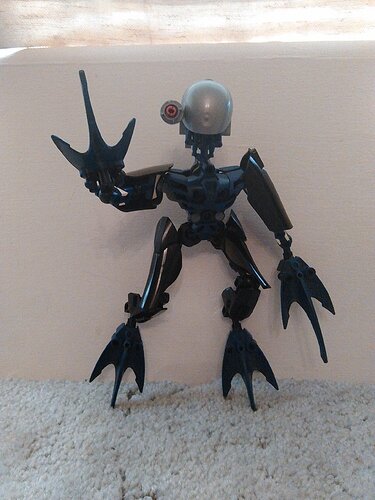 At the bottom of the ocean, there is little to no light, and Viex’s eyes are highly sensitive. As such, he wears a helmet to cover his eyes, with a cyberoptic lens feeding into a darkened display allowing him to see comfortably. His “eye” is fitted with telescopic and thermal imaging, and the helmet can also function as a breathing apparatus to allow him to breath air if he needs to. 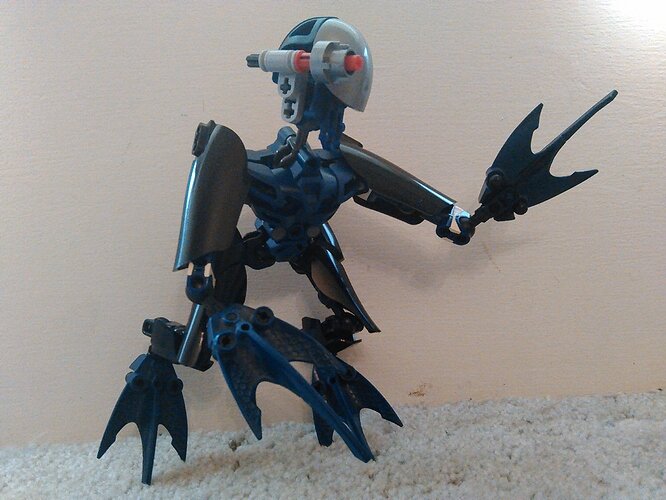 His species is normally adapted to the extreme pressures of the deep ocean, and whoever modified him restructured his skeleton and muscle system so he wouldn’t burst near the surface. Though he can no longer survive at the bottom, he can handle great changes in pressure, allowing him to dive to great depths and back swiftly. 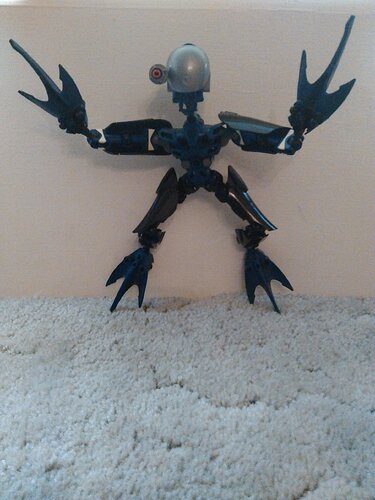 He can act quite scary if threatened, and can be friendly with those he trusts. Mostly, though, he keeps to himself, avoiding much of society. He worries that whoever modified him might seek him out again. Gali Nuva has earned his trust, and ensures that the Dark Hunters don’t learn of his whereabouts. 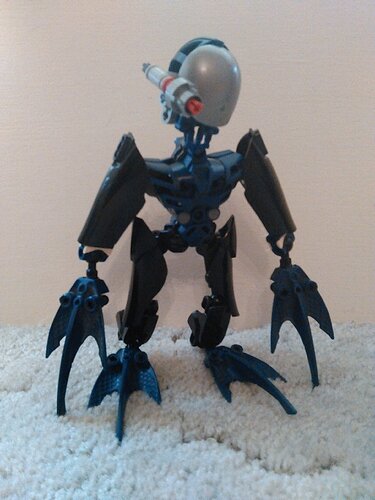 He can walk on land, but prefers the water. He isn’t particularly fast on land, but can travel very fast underwater.

Build notes: This moc was a challenge to myself to make a moc using the Protector Torso and Metrutoran Torsos. The hips, in particular, were a nightmare to design. Also, the Metrutoran Torso does not fit flat over a protector Torso thanks to the shoulder balljoints, and while I could have just used a pin to connect it flatly (which would’ve been a slight stress on the pieces) I opted to make a design that sets it out a few millimeters.

I really like how you used those Kiina Fins!

The arms are a little odd, the way they’re just a big lump, with no real elbows and really thin wrists. The legs work, though.