This is the fourth iteration of my self-MOC, upgraded with parts from a recent Bricklink order. Third iteration can be found here. 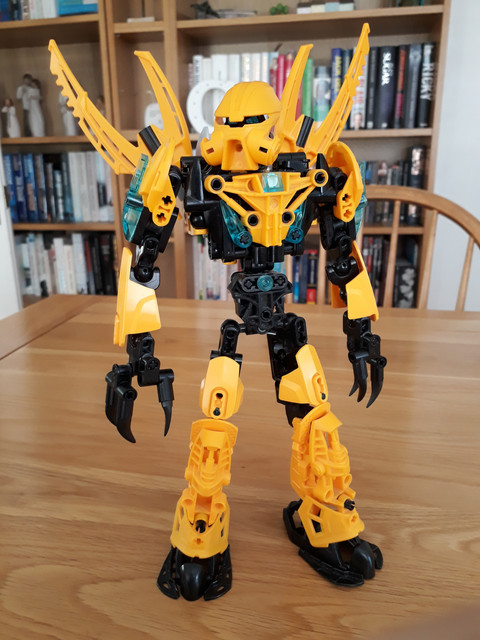 Arcan is a former Toa Hagah and member of an organisation called The Reprisal, a resistance movement against his former Makuta.

New parts compared to the previous version include longer shells on the forearms, Mantax feet, reworked hands with thinner claws, black pins attaching the Bohrok eyes to his chestplate, and a black Mata head with light blue eyes.

In addition, I acquired a silver Kiril/Pehkui to represent his mask during his time without powers. 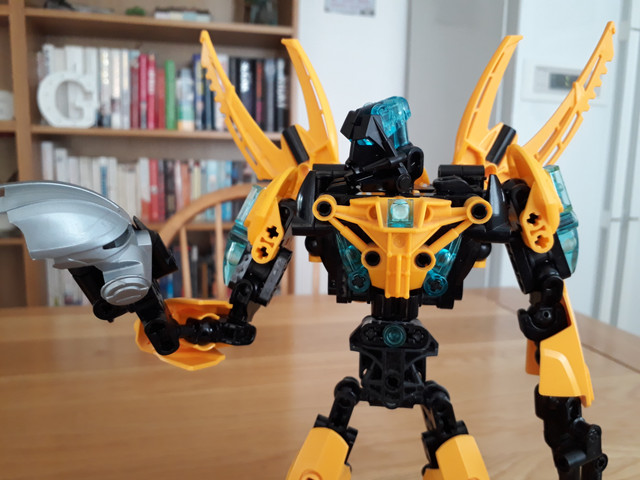 After being rebuilt into his cyborg form, Arcan examines his new Kanohi.

I’m most happy with the new hands. They’re a design I’ve used before, both previous iterations of Arcan and in other MOCs, such as my Toa Ahkmou. In this case I used longer talon/horn pieces, as they represent his claws.

Arcan has a wide array of prosthetics, including his eyes, legs, lung, spine, and arms, with his fingers being large, awkward claws. In order to hold things, he requires the use of magnetic pads on his palms. 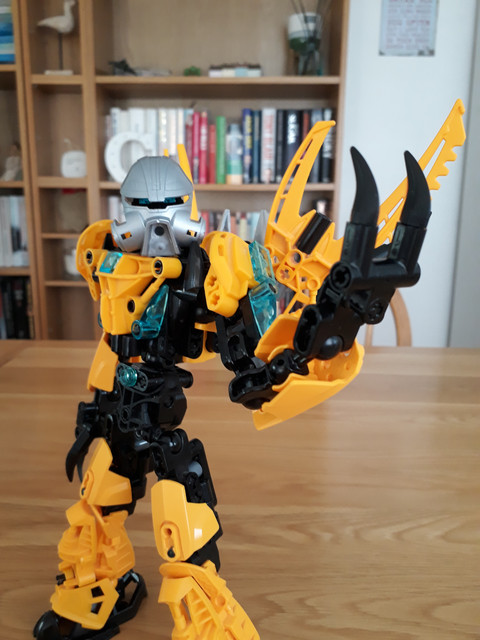 Arcan examines his new hands after his rebuilding.

As a former Hagah, Arcan was trained to use polearms and a Rhotuka shield. While his original spear was lost, he retains his Rhotuka Shield, because I remembered to take pics of him with it this time. 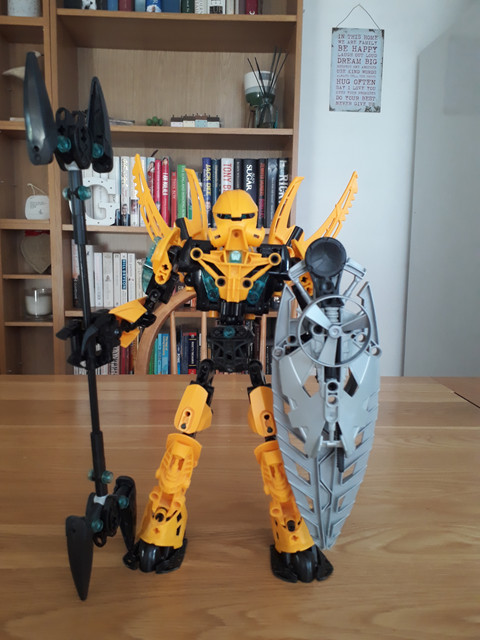 Arcan’s Rhotuka Spinner scrambles the senses of a target, stunning them and allowing him to strike while they’re dazed.

Arcan’s primary Toa Tools are a pair of rending pickaxes with variable length hafts, which can be combined into a forked glaive. 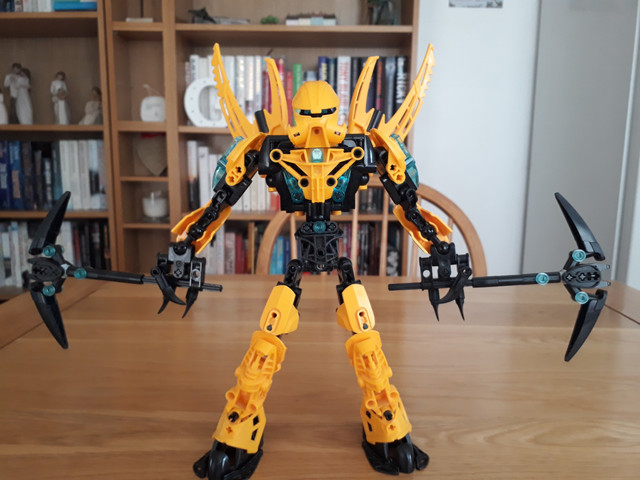 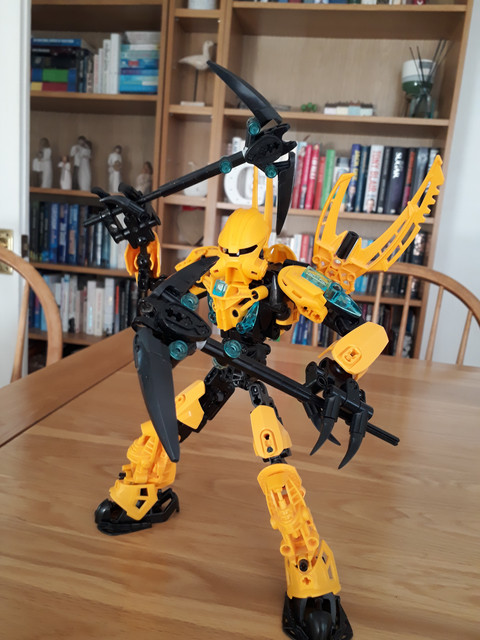 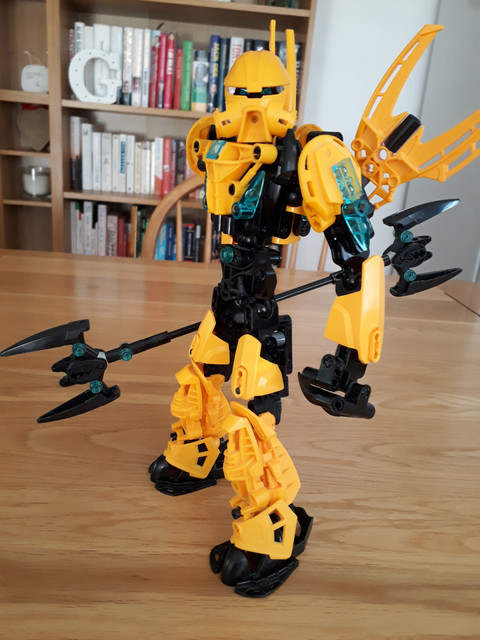 Arcan’s wrists are capable of revolving at high speed, allowing the weapons to be spun around.

Before Arcan was a Toa, he lived in the village of Su-Koro, which is carved into the face of a cliff. As a guard, Arcan used a back-mounted claw apparatus to rapidly ascend and descend the cliff. These claws transformed into his wings upon becoming a Toa. These wings serve as stabilisers for his jetpack and additional thrusters mounted inside his feet. 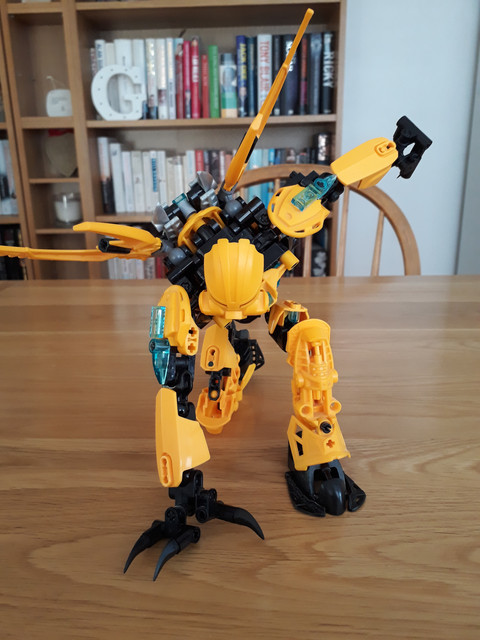 It’s not murder on the knees if your knees aren’t part of your biology.

His closest friend there was a near-identical Matoran named Asren. Both wore a Mask of Emulation, and would frequently mess with others by pretending to be each other. After Arcan was selected to become a Toa Hagah, he chose Asren to replace him on his island’s Toa Team, only to discover that his friend was, in fact, an Av-Matoran placed in Su-Koro during the Time Slip. Asren would later join the Reprisal after Su-Koro was attacked by the local Makuta. 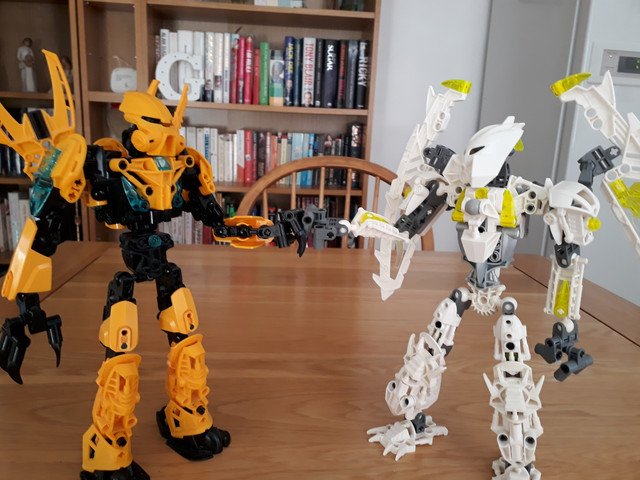 Asren’s body, minus colours and wings, bears a heavy resemblance to Arcan’s original Toa form. The two remain friends, and Asren was able to help his brother through the hardest phases of his recovery.

I put a lot of thought into Arcan’s colours, and I’ve tried as hard as possible to limit it to just his main three. Hence why I specifically went for a black Mata head, removing as much grey as I can from the figure. The only grey parts visible on the outside are Technic gubbinz on the backs of his thighs, and the parts connecting his wings, which don’t exist in black.

You may notice that, despite being a Toa of Plasma, I’ve eschewed the canon creamsicle colours in favour of black and a more yellow colour. While this was originally a convenience thing, and some pre-image versions of the MOC that were pure Inika builds used white, when given the opportunity to correct it, I chose to stick with the black.

My thought process was: “Plasma” is what stars are made of, > Stars are huge nuclear reactors in space, > Arcan is nuclear, > Arcan’s injuries were caused by his powers going into meltdown, > Make him the colour of nuclear/radioactive warning signs.

This is also why I chose to stick with the Kiril, with the gasmask-like vents on either side of the mouth area giving him a “radiation suit” look, and the reason why his transparent colour is blue. He’s been through a few, starting with lime, then dark blue, then yellow, orange, red, before settling firmly on light blue, inspired by the light emitted by the Demon Core when it went super-critical during a post-war nuclear testing accident.

In essence, after all this time, if it isn’t Keetorange, Black, and Trans-Light Blue, it isn’t Arcan. 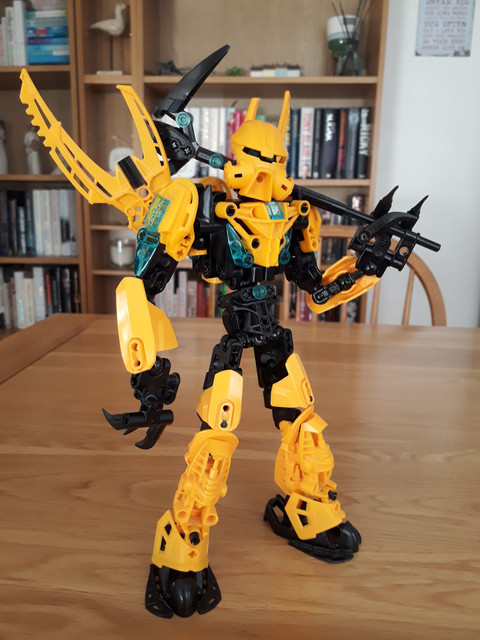 This particular image was based on the art I commissioned from Nick on Planet Ripple, of the V3 version of the MOC. 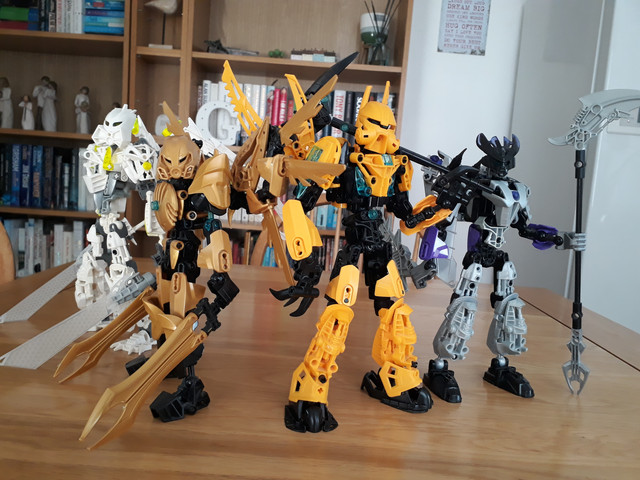 With some members of his team, the Toa Korvos. Left to right; Asren, Toa of Light, Cyra, Toa of Psionics, Arcan, Toa of Plasma, and Therix, Toa of Gravity. While Arcan leads the Toa team, Asren and Therix technically outrank him in the Reprisal.

Lastly, here’s the evolution of the MOC across each version of the build. As I said earlier, there were a few versions that I haven’t counted because I don’t have access to them, as they were done before I had a phone and thus their images are sealed in the depths of my 3DS.

“Noooo, you can’t just canonise a small MOC that I don’t think fits the description.” 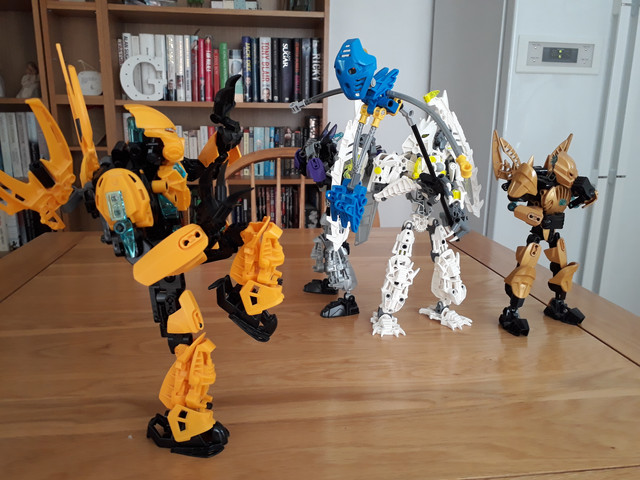 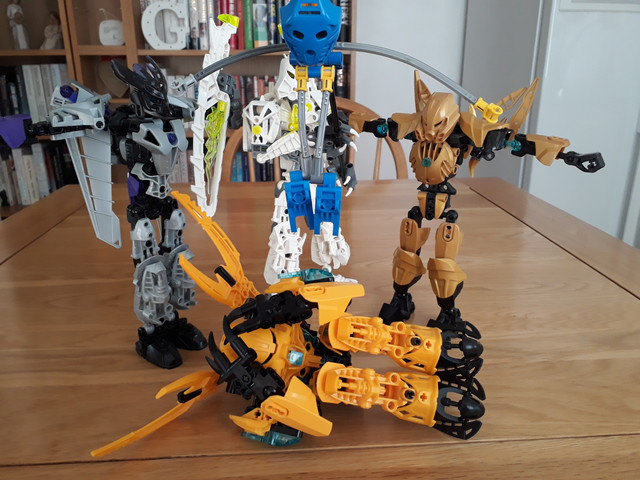 This last picture just is the Bionicle community during and after the contests. No mercy to the weak.

This looks awesome, the ankle guards and feet used on this moc are some of my favorite pieces ever!

This is awesome. Every time I see bios for MOCs I get depressed that I’m too lazy to finally finish up mine

Hey, if I can’t make fun of myself, I shouldn’t be making fun of anything else.

The MOC seems solid, but I feel it would benefit from some kind of hip armor, I also wonder if the ccbs shells would work better in black?
As is the hand connectors really stick out to me as breaking up the flow of the MOC, and the texture of the shells clashes with the more greebley keet pieces used elsewhere.

Hip armour is something to consider, but I’m pretty certain that the keetorange CCBS parts are staying.

I had black ones on the arms of V1 for a few days between giving him CCBS arms and me getting 2015 Lewa, and I’m of the mindset that the keetorange was a definite upgrade.

Added, the smoothness is kinda intentional. Every CCBS part on him except the neck is a prosthetic, so if anything I’m more likely to replace the shins with something smoother.

the smoothness is kinda intentional. Every CCBS part on him except the neck is a prosthetic, so if anything I’m more likely to replace the shins with something smoother.

In that case I would definitely recommend replacing the shin armor. The metru foot clashes hardcore with the ccbs

Wow, this is one of the best thought out Mocs I’ve ever seen. I love the meaning behind the colours, the clean build and that you’ve went to the effort of creating a backstory. Makes me wish I could be bothered to make backstories for mah characters…

Given that this guy is in part meant to represent me, I decided it was best to make him a bit more thought-out than just using some parts that I like.

This is probably one of my favorite mocs on the boards. Though I think it could benefit with more trans light blue in the legs, not sure where it would go though

Thanks, it’s been some hard work but the end product is satisfactory to me.

And yea, a bit of blue in the legs would be good. Due to above comments I’ve been considering working out some new shins, so I might try coming up with something that lets me add the blue to the legs.

You could add light blue studs onto the metru feet?
Or on top of the pin holding in the ankle armor.

This moc kinda looks like one of my self mocs lol.
I don’t have a picture of it’s current version though

Those might work but TBH I’ve already ordered some Roborider heads in Keetorange to try and make the smoother shin thing happen, so I’m gonna hold off on changing his legs until I can just build the new shins.