Arcan is the leader of the Toa Korvos, a former Toa Hagah, and member of the Reprisal, a secretive organisation dedicated to bringing down the Makuta he once served. 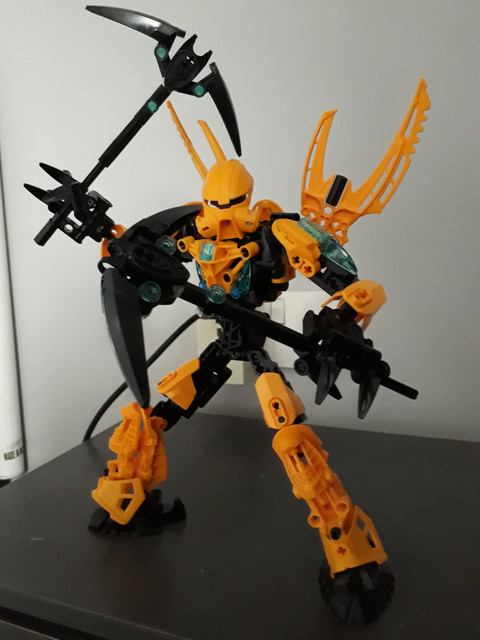 He is stubborn to a fault. Once he sets his mind to a task, getting him to stop is more than a little difficult. He’s fiercely loyal to his loved ones, and very protective, prone to panicking when they’re placed in mortal danger. He normally carries himself with a sarcastic and cynical edge, using a jaded mask to cover up the reasons for his attitude. 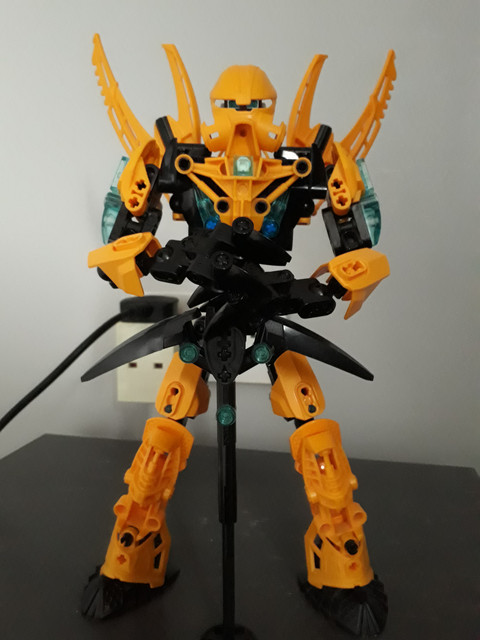 Arcan originally wore the Great Mask of Emulation, and upon becoming a Toa Hagah, it was recarved to resemble the Kanohi Kiril of Toa Dume. Later on, it was replaced with a real Kiril after the original mask was damaged beyond use. 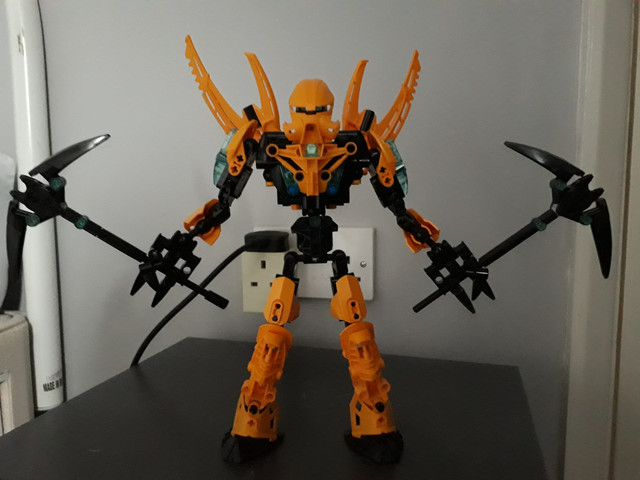 His weapons of choice are a pair of Rending Pickaxes, the blades of which wreath themselves in elemental power to melt through armour and damage the softer parts within. They can also be used for climbing. 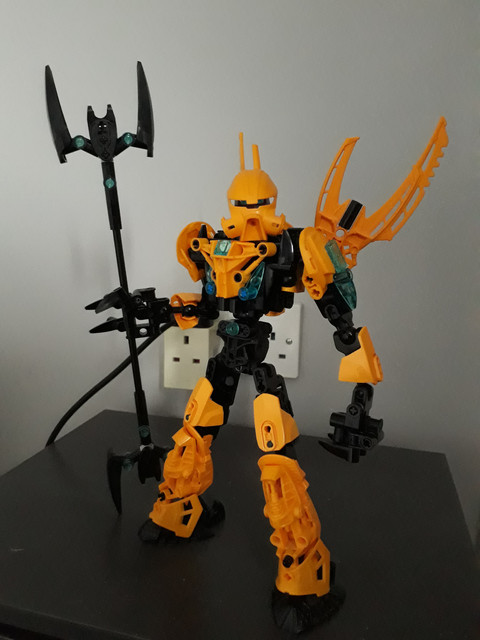 The axes can also be combined into a glaive, which Arcan wields as he did the spear he carried as a Hagah. His Rhotuka shield was lost when he went rogue. (Read: I forgot to take a picture of him holding it) 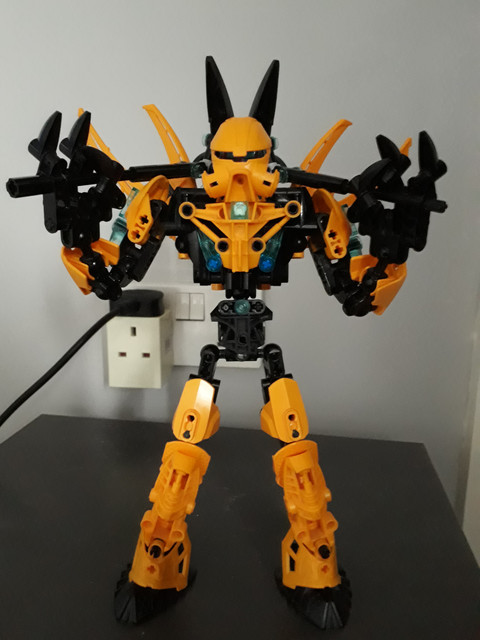 Arcan is no longer a typical Toa. He was modified by the Makuta, and given a pair of implants inside his chest that boost his physical strength and speed respectively, at the cost of heavily limiting his stamina. Arcan was the prototype for this treatment, his former colleagues largely don’t have any costs for using their own implants. 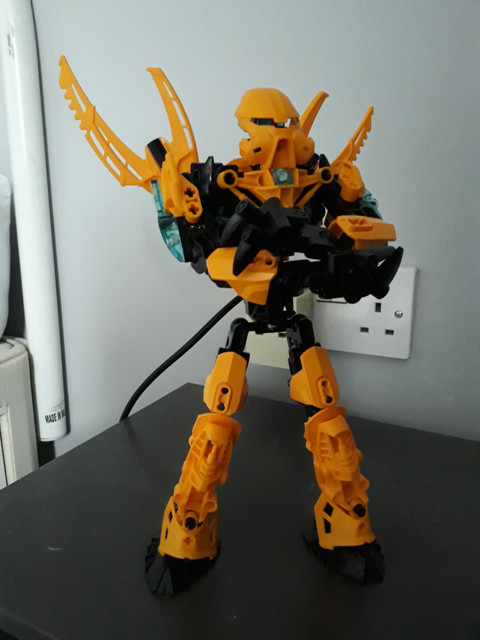 In addition to this, large portions of his body are purely mechanical. After an incident where he attempted to use a Nova Blast, but was struck by the power of a Kanohi Felnas and heavily damaged, he was rebuilt by Reprisal’s medics, and restored to a functioning state. 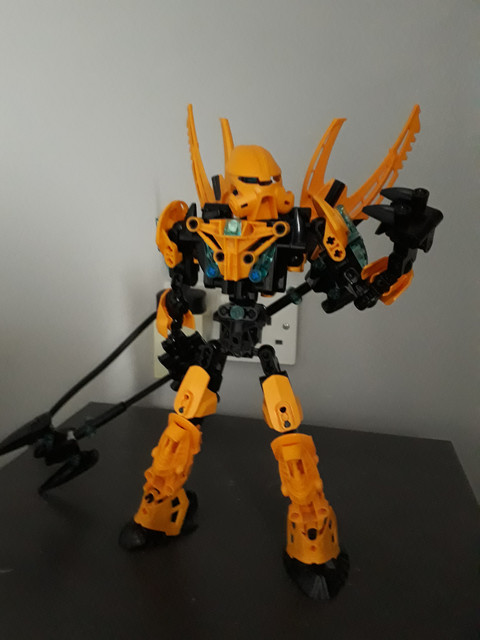 The most obvious example are his hands, which are now large, ungainly claws, with magnetic pads on his palms that allow him to grip his weapons. However, his arms, shoulders, and most of his legs are also mechanical, as are his eyes, his voicebox, and one of his lungs. His spine additionally has a brace running from the base of his skull to its end. 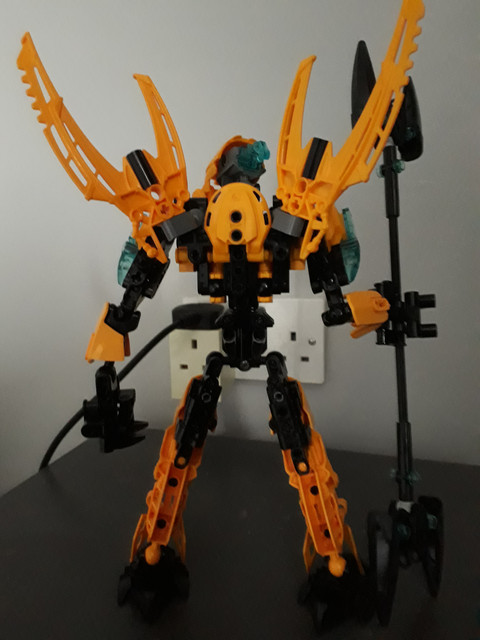 Mounted on his back are a pair of wings, adapted from the climbing apparatus he wore as a Matoran- Su-Koro was built into the side of a cliff-face, and his job as a guard required him to ascend and descend the rock at a high speed. They serve as stabilisers for the engines built into his feet. 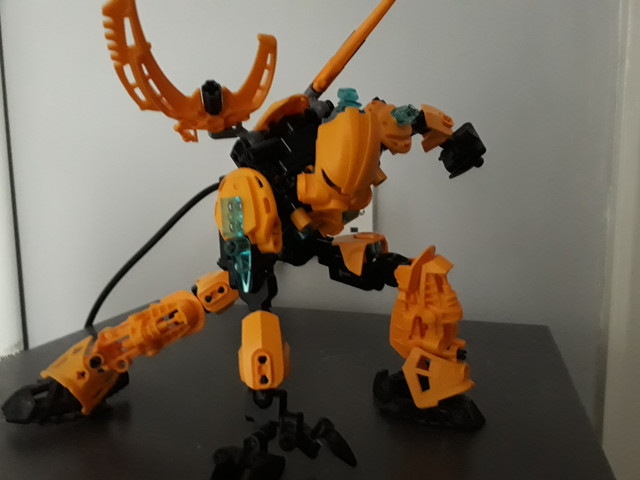 The weapons are sick! Easily my favourite part of the MOC!

Really nice work. The weapons are unique, and I like the backstory.

Well done! I especially like the weapons and the fact that they strongly match Arcan’s color scheme but the Toa himself has also quite an interesting build (my favourite part is the back of the upper leg section because I think it resembles the Bionicle aesthetic pretty well without using any Bionicle parts). I’m looking forward to seeing more of your MOCs. Keep up the good work!

Quite simple on some parts, but there is nothing wrong with that. Nice MOC!

Excellent work on this! The aesthetic of the MOC is very pleasing, and I really love the shaping of the upper torso. The waist area is slightly too thin, I think, but that’s no big deal. I love the really armored look of the legs, as well as the way the wings look. The color-scheme is well-distributed, and the trans-light blue highlights are a nice touch! The weapons are great, and their dual function is simple but effective–I do think it might be worthwhile to consider filling the gaps in the two hand pieces that make up the top of the weapons, perhaps with one of these kinds of pieces: 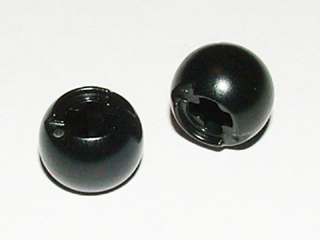 …but that’s your choice!

I really like the backstory of this MOC as well. Overall, very nice work!

Thanks for the constructive criticism.

I did actually intend to put the old-style technic ball into the sockets on the picks, but I don’t currently have any to spare. It’s a long-term goal for one I can scrounge together enough funds to spend on a Bricklink order or two.

Those hatchet weapons are killer. Bright orange and black are always a good color combo. The wide shoulders give him a very powerful looking profile.