Are Hero Factory and Bionicle really in different universes?

I believe, and have some evidence to support this, that Hero Factory is in fact a sequel to Bionicle. Now, I first formulated this theory when I saw this guy 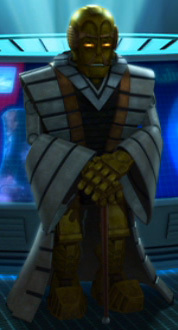 Akiyama Makuro, the guy who founded Hero Factory. Now, look at his design. It looks familiar in a way, doesn't it? The feet in particular have a very.... familiar design. in fact, one that another character with cold coloration used.

Makuro is Turaga Takanuva. Over the years the Matoran and the Agori forgot about the Toa and Makuta and even became fully mechannical. But Takanuva remembered, augmenting himself with technology to keep the memory of his long dead brothers and sisters alive, eventually creating the Hero Factory to create new "Toa." To power the Hero Cores, he gave up his Toa power to turn them into Toa Stones, infusing each hero with the values and ideals of a Toa. Even his name, Makuro, is a corruption of his original name, Takua, which he can only barely remember. He also repurposed the Toa canisters into Hero pods that could travel the stars. However, his power was not the only one that powered a Hero Core. For so many years not even he could remember, Makuta hid in whatever body he could find, until he entered the hero core of Von Ness, corrupting him into a new servant.

One last explanation is that the Hero Factory building is the Mata Nui robot's foot.

This is an interesting theory. Certainly seems plausible enough.
It reminds me of a short story that I thought about and wrote a little bit of that connected the Hero Factory and Bionicle universes. The idea was that some Matoran and Agori scientists built Makuro as the first sentient robot. He later ended up creating Hero Factory to serve as robotic peace-keepers. Some other stuff happened, but I kind of don't want to talk about it in case I end up finishing writing the story later. I should probably do that...

Nice theories guys keep it up!

I think the Mata Nui foot theory is the most realistic. Just kidding, but I like this theory.

I really do, but it might need more evidence, that evidence is quite hard to find though.

There's also the idea that the Great Beings made the two worlds on different planets, along with the roboriders and throwbots.

The Great Beings simply go to planet to planet experimenting with making life. The Hero Factory world being the most successful.

I know my theory doesn't really have any evidence, but it was mostly conceived to be a plot device and not a serious theory. Thought I'd put it here anyway though.

This theory really doesn't seem too plausible to me, too many assumptions would have to be made for it to work out and there are a lot of differences between the two series'. @Kookie 's theory though seems more likely and I'd love to read more if you decide to finish writing that story

this is exactly what i thought when i saw him

Makuro doesn't have nearly enough grey armor and angst to be Takanuva.

They could be in the same galaxy but in different universes, explaining the similar style.

I've always wondered if they were in the same universe or not. I personally think this is a farfetched theory, though.

Or they could be in the same universe but different galaxies?

Yeah, not sure which way round it was meant to be

Universe= Everything
Galaxy= Relatively small cluster of stars and planets and other space stuff, eg, the Milky Way galaxy

Ah ok, thanks for the clarification

I've always thought that there was a constraction galaxy, where all the various themes would orbit around on their respective planets. Bionicle being in the distant past since it was the time before time.

MYTH BUSTED
Next myth-does Mata Nui start with M? Or 76?