Hello, fiends!!
I’ve been meaning to make a MOC for Artakha for a long while now, but am unsure of just how to go about doing it. Should the design be similar to the set released for Karzahni? Should he be a mix of several titan set themes, like Maxilos’ chest and Axonn’s legs? How do you all imagine the wearer of the G1 mask of creation? Please feel free to comment and help me get this ball rolling!

Well, Artakha was sand green in the old continuity, so I’d use Bricklink’s color guide to see what pieces are available to work with. Hmm, looks like there are lots of dinosaur pieces in that color, maybe I’d buy some of those and get started. Definitely want to use the sand green pieces that came in Zaktan and Swampfire also.

That’s definitely something I’ll keep in mind for the future–I’m just a bit tight on money right now though XD
For the meantime, I intended to mirror the Karzahni color scheme, but stick to more silvery/gray colors for armor…I will hopefully be able to use more true colors in the future if I get the chance. I appreciate your feedback though!

Using Karzahni as a reference point might not be such a great idea. While they are supposed to be brothers and all, the set version of him was actually post-mutation, and the artwork depicting his previous form was after he had already rebuilt himself at least once, so it’s entirely likely that he no longer resembles Artakha in the slightest.
That being said, aside from his color palette, mask, and weaponry, you pretty much have the freedom to build him however you want.

Using Karzahni as a reference point might not be such a great idea.

That’s…a very fair point. I hadn’t thought about that. Thank you for your feedback!

You can use the G2 Mask of Creation.

I intend on painting one silver to match the armor color, maybe even painting the individual runes a green color if I can XD

You could use a custom build greebly mask, like Sigma Takanuva MOC, to get more detail and texture in.

While that is true, I feel it would be difficult to truly capture a look that says “this is the mask of creation”, especially since my pieces are limited. I love the idea though!

I personally see him as a old matorian style build, kind of a mix of matorian and turaga. He has a cane and looks wise, but not strong or fast. If you piss him off he is really strong and fast though not looking the part.

I can see the old wise man build, but I remember from somewhere that he’s like 10 feet tall, and makes it seem he’s like warrior and master craftsman. If anything he could be like a Maxilos Robot as he made them, possibly in the image of himself.

I’m very much considering doing a modified Maxilos build for him, maybe with some Brutaka/Axonn style parts in there

Green gold color scheme, use the G2 one, titan size, maybe a cloak.

I certainly intend to make him titan sized and maybe give him a cloak, but i think I’m going to keep to the G1 color scheme of green and gray

I saw earlier he is about 10 feet tall, grey and green with runes on his armor. He is also has an imposing figure.

@BBricks @Sealman133 @Toa_Vladin @Likus @Timageness @BrickDreamer Alright, guys: I’ve decided to do a modified Maxilos Build…but should I extend the torso and make him about 2008-Takanuva-height? Or just leave him the same size? My concern would be the tiny mask on a big body, but I want to hear your thoughts on it. The Torso would be a modified Maxilos, the legs would probably be a modified '08 Takanuva or a modified Skirmix leg (bulkier and with not armor for the second), and the arms will be custom if I go for the taller guy. Hands would be based on Toa Mata Nui’s.

Make him 2008 takanuva higher, or a bit shorter around3/4 or so of the hight, use iruni’s mask mabey with some runes painted on? 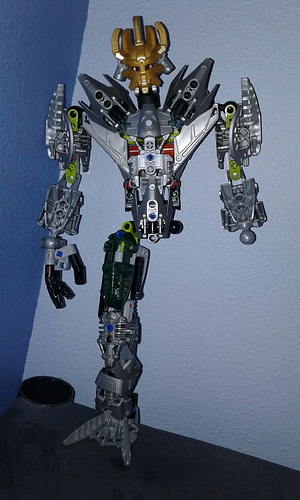 That’s what I have so far