Artakha, the guy that makes the stuff (Canon Contest #2: Meet the Maker) 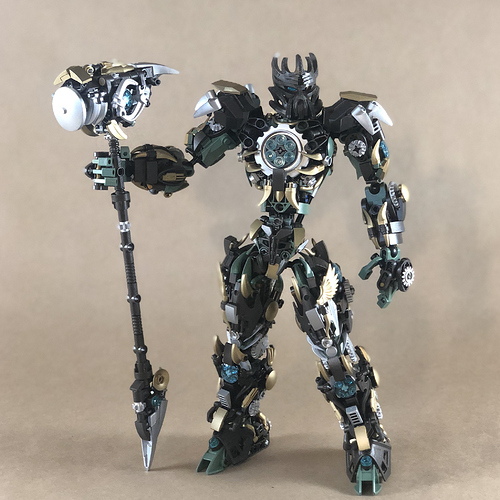 It’s been an obsessive past however long since I started making this moc and I think I’m just happy to finally be done. This moc is a bit weird to me personally in the sense that it’s somewhat counter to how I envisioned Artakha for most of the time before I built this; namely, lean and limber. Well this take obviously ain’t lean. Much of that began out of a need to accommodate an awesome but rather large custom mask (thanks KhingK, link somewhere below), as well as the idea of a more kingly theme carried over from my friend Kodiak, to whom I owe the gunmetal-sandgreen-gold color scheme and very choice of mask to begin with. But I think it all worked out in the end.

“Does Artakha carry a work hammer or a war hammer?”
“Yes.”

Front, Side, Back Profiles: 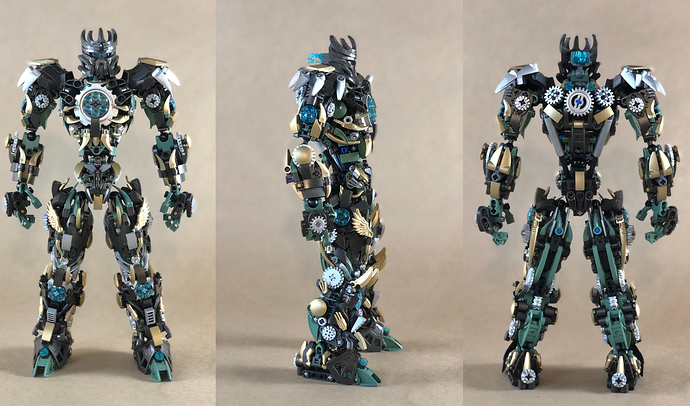 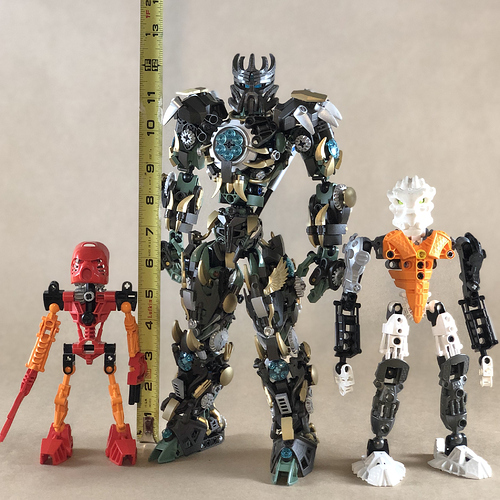 (misc) scale2048×2048 2.57 MB
Artakha here stands at around 12.5 inches total, 12 without the mask. To put another way, he’s literally 2 technic units taller than Brutaka if that helps. Most or all of my mocs are situated in the G1 universe and I’m fairly strict about my own internal scaling between them. Unfortunately when it comes to canon toa sets in particular, body types and heights run the gamut between 2001 and 2010, despite all toa canonically being roughly the same heights in-universe. I prefer the elegant solution of using Inika builds as the real life standard of scale for all mocs or sets and just scaling up shorter toa waves in one’s imagination for consistency. But I’m including a wild Tahu here for people that really, really like the mata build.

I have a video here that shows more of the moc’s features in depth, but the takeaway is that limbs keep to my own minimum of a 90 bend, arms and pauldrons work in tandem, fingers are a must, and the waist here can bend with the help of some classic piston-y goodness. I find I have less use for that last one than I thought I would, as most of Artakha’s poses lend themselves to more straight-facing, stoic types. 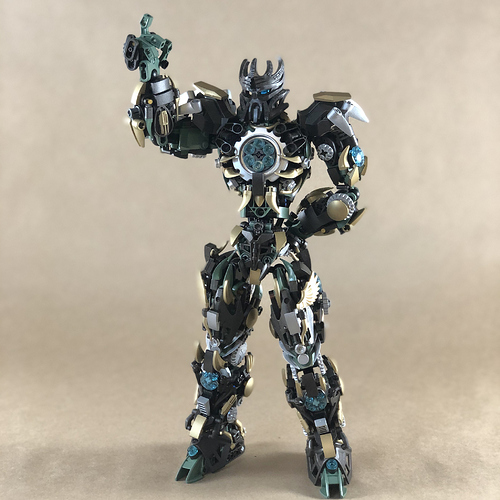 Maybe it just slipped his mind that day, but I always preferred to think there was a bit more oomph to his weapon. My idea was for a work hammer that can convert into a war hammer with some battle attachments and accompanying technological augmentations. 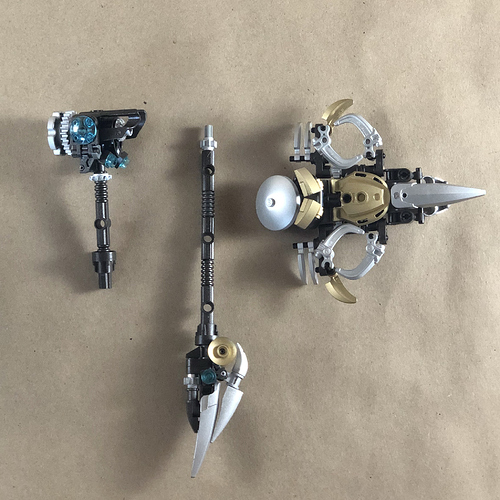 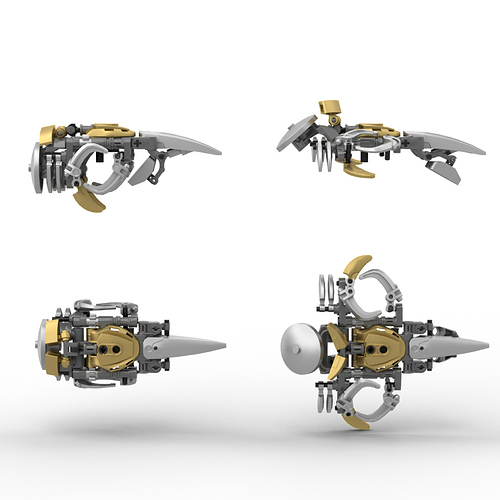 The handles for both forms attach from their open pinholes into the stud on the inside of his hand. It’s a surprisingly tight hold, and it eliminates need for any auxiliary lego pieces between the tool and the hand. 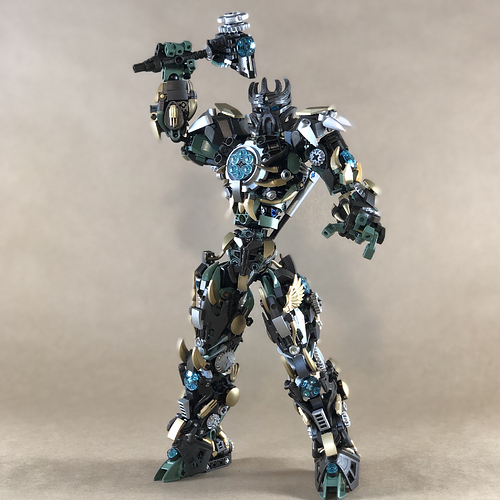 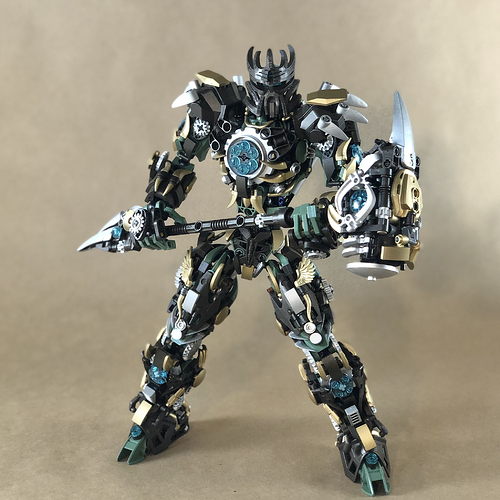 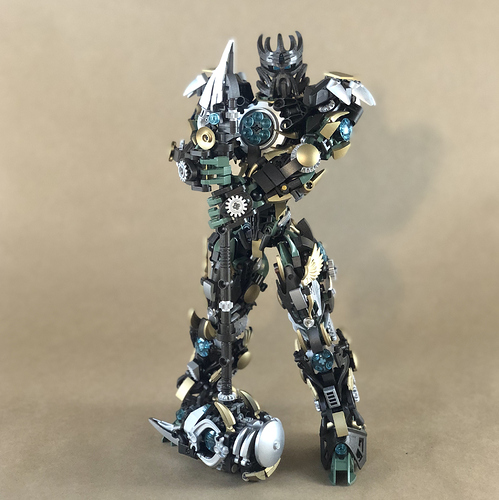 There were two things driving this moc from beginning to end: elegance and mechanical harshness. If the only thing I managed to accomplish here is integrating the contrast between these two I’ll be happy. On the one hand, I’m not on the idea that Artakha is just your grubby, mmo-style blacksmithing character. For all the hammer and forge motif, the guy is making the most technologically advanced stuff in the universe. There is a distinctly transcendent mystique to his character and I wanted to portray with opulence. But at the same time, I wanted that to clash with the mechanistic side to this duality. The approach to the second was fairly simple minded - just lots of gears and radiator vents, all colored silver.

Instructions:
Almost forgot, I’ll be updating this post to include a how to build video after the moc contest is over.

Custom mask is by KhingK and can be freely downloaded here. 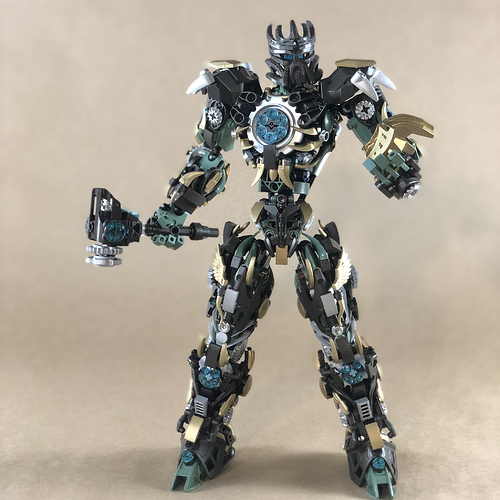 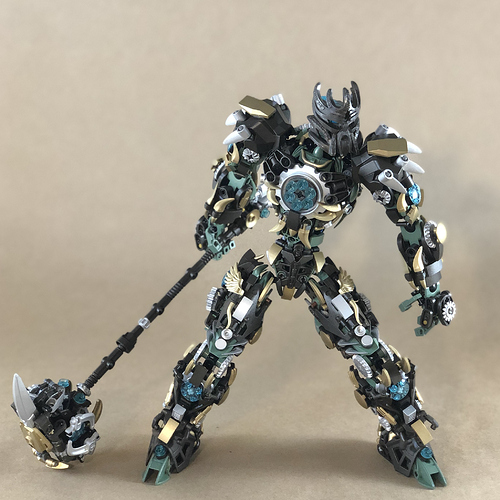 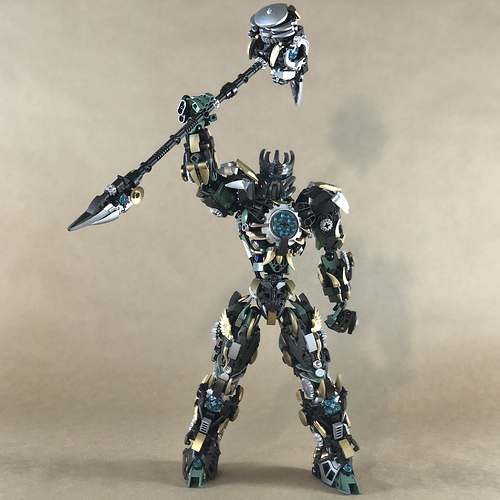 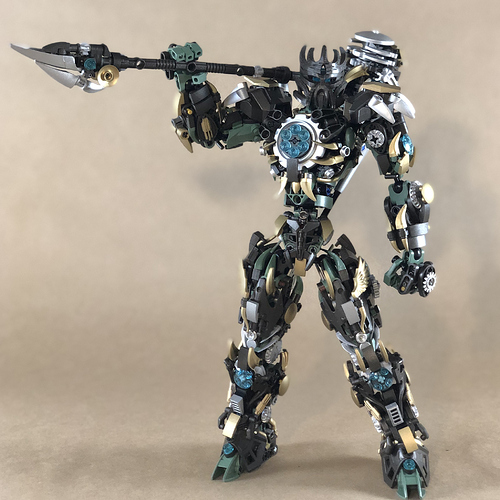 This is now my #1 vote in the contest, probably followed by Galva (who technically hasn’t entered the contest yet, as their Artakha is still being worked on)

This is my favorite entry. I love how you took the minor hammer / warhammer debate and made it a feature! Insanely clever. His gears and his lights give off an ancient, powerful and ornate aesthetic.

People may say he’s too detailed, looking more like a bayformer than a bionicle, but I say it works and the gribbles are distributed well.

Thanks for the shoutout man. It’s nice to see someone go for a kingly vibe using KhingK’s mask. I love the silhouette, proportions; implementation of pistons, gears, power core, gunmetal, and the fact that the hammer can be made simpler. Putting the silver aside, the color palette kinda reminds me of Almec’s armor from the final season of TCW. However, I won’t be surprised if the color blocking and amount of painted parts deters too many people. 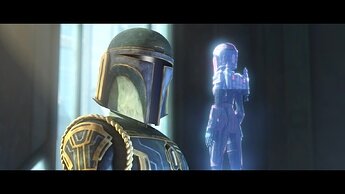 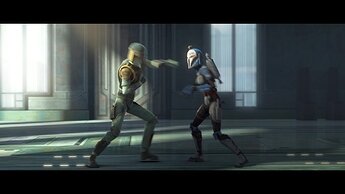 Holy moly. If you win, you better post some instructions my dude XD dang, this is cool.

Mata Nui, you just flexed on all of us! This is incredible!

Dang there are so many good Artahkas, ya’ll gonna make it hard to vote!

This model is just absolutely gorgeous, it’s just elegant enough, but it’s not so over the top that the man can’t possibly be a forgemaster. the pauldrons are regal and the hammer is absolute perfection. I also appreciate that you have both a long and a short hammer and the one becomes the other.

Now the real question. Do them gears got a function? ( ͡° ͜ʖ ͡°)

Regardless of whether I win or not, I have an instructions video ready to go; I ain’t gonna do people dirty like that. I’ll be uploading after the contest ends.

Not much more to say. Fantastic.

This is absolutely phenomenal. The level of detail, the colors, the silhouette… and that weapon is a work of art.

this is so Excellent! I want to vote him!

Ah, what the heck. It’s better than most entries so far. It’s got my vote.

We are simply not worthy of a MOC this AMAZING.

Nice, proportions shaping and so on. But what is with color scheme??? It is so messy and there is not much green (hey, the 60% of green guideline is still here). The hammer function and your detailed descripyion are unique, but those colors…
Also, I see the mechanical concept - and it is an appealing one, don’t get me wrong - but are those silver gears, raditors and stuff actually modifications or what? Like were they installed by Arthakha himself or by the Great beings? They add robotic athmosphere, but no really “high tech” thing.
CCBS pieces

All in all, it is still nice MOC, especially in shaping.

Mata Nui on a bike, this looks amazing! But… is there enough green?