Some members of the r/bioniclelego Discord have been working on a project to measure every G1 set and compile them into an in-universe height spreadsheet.

Here are our findings

Calculator based on this data

It was really awesome to be a part of this project, and guys, I highly recommend giving this a thorough look. It really gives a good picture of how tall everyone should be in-universe and I’m thoroughly convinced that the calculations we made correspond to canon. Huge thanks to @toaskello for putting the spreadsheet together and thanks to the other contributors on this project.

I love, how you added “bendy”. Even tho a lot of peopel hate that MOC, I like the jokes and memes behind it…

This is really cool! I can’t imagine how much work went into this, but it’s super awesome and I love that y’all did it.

Props to all you madlads for making this

I feel like 2004-05 should be separated from the later years, which can all be grouped together.

This current system makes the Toa Mahri really tall (not impossibly tall, but definitely noticeable), and it implies that the Toa Nuva grew 6 inches to a foot by changing armour.

I understand that Onua and Pohatu will still grow here, but that will happen with any system, because the sets changed the heights of the characters relative to each other, not just previous incarnations.

The new building system in 2006 brought with it a new scale, and I think that needs to be accounted for.

This is covered in the “Justifications” section. It’s common to separate 2004-2005 off from the rest of the years, but we found insufficient evidence to support that. Most of the Toa we saw from 2006-2008 were either supercharged or Toa Nuva, who we’ve already established as taller than most Toa. Nuparu and Jaller Mahri are tall, yes, but Kongu and Hewkii bring the average height down to pretty close to the average Metru height.

Edit: Here are the Nuva height differences. It’s not perfect, but it’s about as close as you can reasonably get IMO. 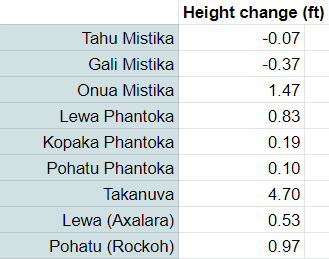 I understand that a Toa Nuva is taller than a Toa. I think those heights are about where they should be.

There’s only a few that I think are unreasonably tall, but they are all from the later years.

And part of the problem is also that the sets really caused unjustified drastic height changes for a lot of the Toa.

One way to fix this problem is to lock in a character’s height with their first appearance, and then ignore later sets. After all, how does it make sense that Onua Mistika becomes taller than everyone else? Just say that the later sets are not to scale with each other, and all Toa are roughly 7.2 feet.

With more obscure characters, we would have to rely on comparing them to other sets, but that is okay since these characters usually do not have established heights.

Honestly, we’re kind of working with crappy source material here, given the set’s lack of respect towards previous character design.

Oh, I completely agree that there are inaccuracies present here as set designers didn’t always take relative scaling into account. I would definitely use the 2002 height for Onua Nuva rather than his Mistika form for his height, the Mistika form is here for completeness.

Will other non-set characters be added, such as Tobduk or Artakha?

EDIT: Never mind, I found the other sheets.

Artakha will be added to the sheet as soon as the winner is announced and measured.

Rule 10 on the Helryx contest suggested she should be in 2009 scale, so she uses 2004+ scale on the sheet. I agree 2001 scale might be more appropriate for the winning MOC, however.

Now that you say it, that logic makes a lot of sense. I’d say that using the 2004 scale is the better choice, since that was the scale of the contest.

Even if you went with the 2001 scale, Helryx is still short though.

aren’t the bohrok described somewhere as actually being taller than toa mata unlike their set version?

I believe you’re correct about that being mentioned once, but in the numerous visual depictions of Bohrok they are always in scale with their sets when compared to other characters.

So Takanuva Mistika height is calculated based on his set height compared to other Toa? I always thought that he is not that big. Its just a titan and titan sets are meant to be big.
In the book it is stated that he is several inches taller than every one. 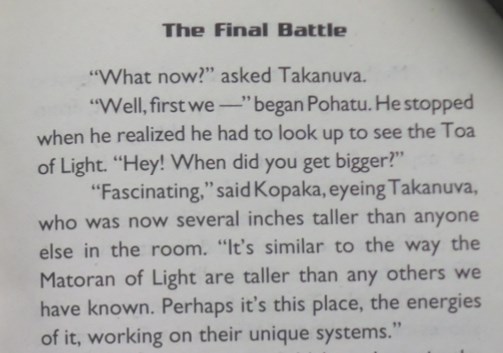 If he was 4 feet taller than other Toa Mistika it would be said that he is several feet taller not inches.

But the Toa Mata and Toa Nuva are scaled up to the height of the Toa Metru which have similar heights to Toa Mistika/Phantoka.

What is the justification for this inconsistency?

I believe he continued to grow after that point. Greg has suggested doing exactly what this project has done regarding titan Takanuva specifically.

(I know the second one says to assume a Toa Nuva is 7.2 feet tall, but none of the Toa are the same height so they would all provide different measurements for Takanuva. I think the 7.2 figure can be taken as an approximation in this case.)

Would be best to make a chart with all the sets in line.

I believe he continued to grow after that point. Greg has suggested doing exactly what this project has done regarding titan Takanuva specifically.

Imagine how jarring that’d be for the other Toa Nuva.

Thanks to HalfBaked, the sheet now contains Irnakk! Due to his inability to straighten his legs, he’s shorter than each of the Piraka by at least 2.5 inches.

It would be really helpful to have the feet measurements be in feet, inches, not feet, tenths-of-feet.

Still though, this is immensely cool and helpful. Thanks to all who worked on it!

I’ve been dabbling around with doing something like this but could never get very far. Now I don’t have to! Will be checking out and putting it to use for sure!