Hi guys, thought I’d share this little scene I made with you. I’ve been getting into landscape modelling and this is a very simple first go at it: essentially just props and mocs on top of sand and cardboard, but I’m hoping to make something a bit nicer and a bit more complex in time. I’m posting this to artwork rather than Lego creations because it’s a mix of the scenery, the matoran and the ideas which I’m trying to show rather than just the fairly simple matoran mocs.

This is a po-matoran quarry, busy with workers and people looking to trade for rare minerals. I’m putting some of my favourite shots here, but there’s a full album with additional flavour text at this imgur gallery! 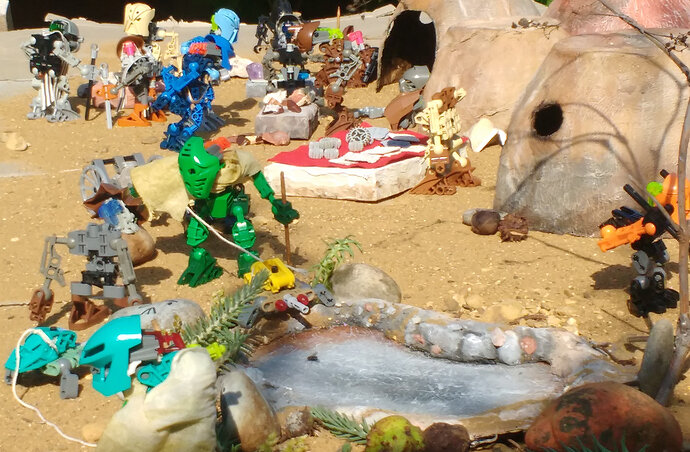 The quarry is built around some rare mineral veins and a spring of liquid protodermis that allows the workers to survive and even lets some plants flourish.

Le-Matoran shepherds stop by with their beetle cattle. 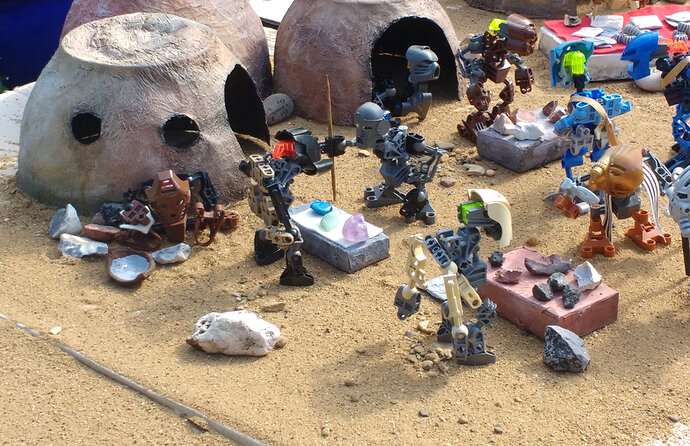 Customers from all walks of life visit the quarry to get the rare minerals they need. 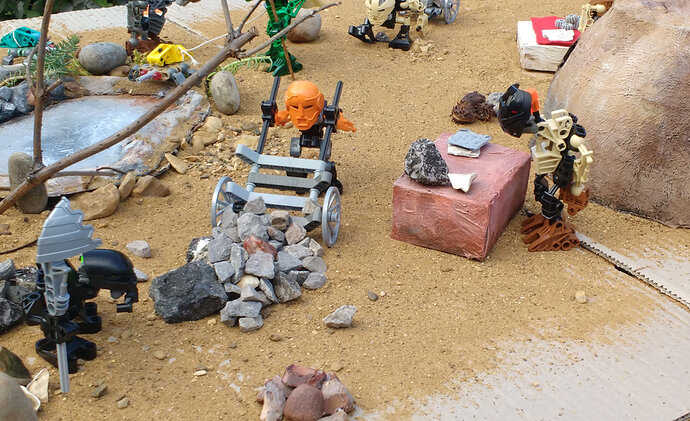 Nowadays a lot of the digging and transporting is done by onu-matoran workers, but po-matoran still take charge of sorting the mined stones and minerals as well as record keeping.

It’s really something to look at, they fit right in, it just really feels like Mata Nui.

Thanks my guy. Mata Nui as presented in MNOG and MNOG2 was definitely a major inspiration: I love all the villages filled with matoran bustling around on business.

Very original. Very nice. Just making a place within Bionicle world from cardboard is very cool thing. the idea with quarry is also good. Nice matoran and posing. I myself have made some terrain for Lego, but haven’t gone further than some white separate pieces. Hope you will do some more such things. Also, adding some more detalization would be super-cool, I think. And maybe some lego-built things, like in Bionicle Heroes.

Nice job! I like those huts could you tell me how you made them?
I was thinking about doing some kind of diorama too maybe the beach of the island of mata nui or maybe one of the koro.

What stood out to me first was how lively you were able to make the scene. It feels like a casual snapshot of a casual day in the life.

@Lesnichiy I’m definitely planning on making more and making some stuff that’s a little more detailed! I’d like to do some more industrial or urban scenes, and for those I’m planning on having a few more technic built things like pieces of machinery or scaffolding.

@GX_05 The huts are made with a really simple paper mache technique that’s basically just layering toilet paper and kitchen towels then soaking them through with watered down PVA, and a little sand and grit for texturing. After painting it up in the right colours, dry brushing really brings out all the little wrinkles in the paper and bits of grit for that stoney look. I got the method from DM’s craft on YouTube.
For the huts I just did this on top of some cheap plastic mixing bowls to get the shape. Three of the huts only used the toilet paper and kitchen towel which resulted in them being very flimsy and prone to losing their shape, but one of them has a layer of printer paper in which makes it much sturdier.

I’ve been having lots of fun with this stuff and loads of it just uses really common household stuff like bits of cardboard, food boxes, paper, etc., so if you want to have a go at it I’d really recommend it because it doesn’t actually require buying loads of speciality items! I’m lucky because I have a lot of stuff like construction sand and paint brushes already lying around the house but have a look at channels like Terrain Tutor, DM’s Craft, Luke Aps and marklinofsweden to get an idea as to how you can do loads of stuff cheaply with simple household stuff.

@Oonie I’m glad it manages to capture that liveliness! Just casual stuff going on in the matoran world is definitely what I’m trying to go for.

This is adorable and great; I haven’t seen anything quite like it.

I LOVE that cart

Very nice. You did a great job bringing everything together