I just want someone to find a way to use metallic green: 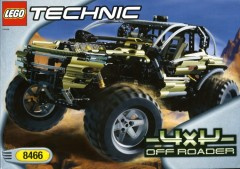 May I direct you to this MOC?

I should go to bed, I read that Nidhiki’s Volitak doesn’t have a refridgerator

Yeah, that’s bad. Of course it has a refrigerator! Gotta bring snacks in case you get hungry mid-battle, right?

This is why he was so distressed at his mutation

This is why I used Knights Kingdom pieces (specifically those from Vladek and Karzon) - they look unique and armor-y enough to set him apart from the other Toa, but they are still at the end of the day just…black. Meaning that I didn’t have to really bother with him having a mask that does not have the same color as his armor.

There’s all this talk of what exactly Nidhiki’s Volitak looks like, and to me it’s pretty clear. I understand there’s some a debatable level of clarity to Farshtey’s answers. But for me personally, I will be using a resin-cast dark green version of Nuparu’s Volitak. I believe that’s what Greg Farshtey envisioned, based purely on his answers.

But where I’m at with my build (And yes, I’m already starting it) is this question of are we building “Hero Nidhiki” or “Dark Hunter Nidhiki,” or does it not matter as long as he’s obviously still a Toa and not a crab-clawed Vahki-headed bug-centaur?
Obviously, we’re building him as a Toa and we’re building him pre-mutation. But I would imagine that it’s not unlikely his look changed some after he joined the Dark Hunters. And I’m not saying there’s would be a considerable difference in my build one way or the other, but the ideas I’ve schemed up for either iteration do have small differences.

Should we discuss kind of having more set in stone colors for the Hagah? Or leave it be so it can remain super open. Because honestly I want to see some level of uniformity within the team and that can happen through multiple different approaches. Let me explain more.

Some people want to use unconventional metallics and I can get that, although this seems like a weird time to introduce that to me. But what I’d be worried about is having say, three silver metals on the team, one gold, a pink, and a gunmetal. To me that just sounds very off putting. Some level of combination or none at all would make more sense to me. Such as all having their own unique color or being three silvers/three golds or two silver/two gold/two other undecided same color.

To me the two-way three split sounds like it would create the best uniformity because… well those shields only come in two colors. Although if there is a source that can 3D print those shields, then I think the 3-way two split could work. In such a case I’d imagine a pearl gold or gun metal could work as that additional color and be aesthetically pleasing for the team still.
Or additionally another idea would be having two members of combo color to save more stress on those shields. I played with the idea a little while back with a Pouks moc I’m still modifying. 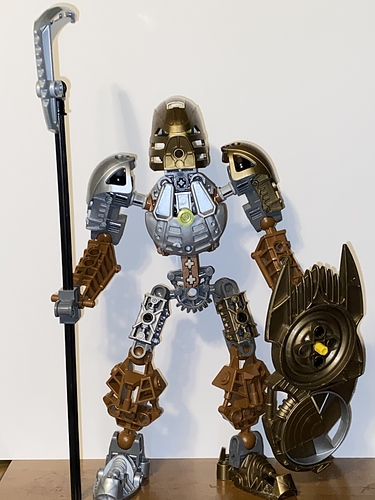 image3024×4032 1.83 MB
This is again just all for spitballing sake, not trying to have MY vision be the only set approach.

Has anyone shared this thought?

I too feel there should be some rule regarding Hadah’s armor. 3/3 and all-different-metals combos of colors look best to me, though It’s just an opinion. I see only 2 ways to implement such a rule:

Both variants are not very good, but I still hope that we will find a way to solve this.

I agree that the team should have some kind of uniformity, but I don’t see how that could be enforced by the rules, even if TTV was willing to do it.

Because there are many ways to do uniformity, all of which are equally canon at the moment.

And since each Hagah is having their own contest, the winning MOCs may not (and probably won’t) conform to and kind of uniformity.

I see only 2 ways to implement such a rule:

Another way to do it would be to have each entrant submit all four Hagah. This could be implemented at the MOC stage (each person has to submit four MOCs, to be voted on a a group) or at the Art stage (the artist recolours the armour of the four individually-decided winning MOCs, and submits them all together).

Of course, no matter what stage you implement it at, you will run into a situation where a voter might prefer the Kualus from one entry, but the Bomonga from another.

I think the individual appearances have to be prioritized over the group appearance, given the purpose of these contests.

There is one final solution that I can suggest: host the contests in series, rather than in parallel. Then, the voters at least have the opportunity to base their votes off of previous Hagah winners to try to force some uniformity if they want.

But this is extremely unappealing as well; we would be making the Hagah Contest four times longer, with no guarantee that it will result in uniformity.

I think we have to accept that the metallic armour colours may not follow any pattern. And this kind of makes sense in-story: there would have been hundreds of Toa Hagah at one point, so there definitely would have been repetition within the Toa Hagah as a whole; each Toa wouldn’t have had a unique colour. So then maybe each Hagah just got to pick their favourite colour, and that’s why there’s no pattern within each team.

(Also, I want each Hagah to have their own unique armour colour. #pinkpouks2021)

-It does not really defeat the purpose of these contest. The purpose is to get canon appearances. The purpose is not to have absolutely unlimited amounts of freedom since we are already working with defined characters-albeit exactly how defined they are is varying widely from each contest. For example-a limitation we are absolutely going to be implementing in the Gold Skinned Being’s contest is… well its probably going to have to be gold and reptilian in nature. Not allowing him to be bunny-like and silver isn’t going to be prudely limiting freedom.

-Well if we discuss it before hand and set some ‘general guidelines’ or rules within our contests before they happen we can address the problem with uniformity color wise. Thus being the point of discussing it before hand.

I think we have to accept that the metallic armour colours may not follow any pattern. And this kind of makes sense in-story: there would have been hundreds of Toa Hagah at one point, so there definitely would have been repetition within the Toa Hagah as a whole; each Toa wouldn’t have had a unique colour. So then maybe each Hagah just got to pick their favourite colour, and that’s why there’s no pattern within each team.

This is indeed a fair point, but also at the same time-to me at least- I find it highly unlikely that these supposed hyper disciplined Toa guards were given as much freedom rather than structure. This has no base though and this is just going off of how structure makes more logical sense to me with these individuals. Also incorporating new metallic metals at this point in time without any other canon base seems to be far more outlandish than having set colors. This is again, from my own perspective on the subject.

I think there should be uniformity but it should be up to the builders how they do that. People aren’t dumb - I don’t see an entry with four different metallic colors being voted upon over more uniform entries.

The contest isn’t going to have a single submission of all 4 Toa, its individual for each. It’s not that I think people are dumb, it’s that I believe it’d be tricky to have a natural coordination simply because of the nature of the chaos that is voting already.

Each Toa is submitted individually. There is no group submission.

Or did you mean a single Toa with multiple metallic colours?

Yeah my bad, I completely forgot the Toa were canonized individually.

What if there was no MOC contest for the Toa Hagah? Instead, there could be art contests to determine the canon look of each individual team member, and then a second art contest to depict all of the team members together.

Alternatively there could be a MOC contest and art contest, as per usual, but then a group shot art contest later. To prevent the contests from feeling dull, the Hagah group shot contest could be done several months after the individual Hagah art contests.

Each Toa is submitted individually. There is no group submission.

The contest isn’t going to have a single submission of all 4 Toa, its individual for each.

The contest rules are not set in stone yet, and are subject to change.

As for my thoughts on color coordination:

There were discussions about colors for Toa Hagah metallic armor. And, as far as I know, we have no clue in canon about it. Since voting will be for each Toa individualy, it might happen that they have pretty random colors, that might be not very beautiful together (for example, 3 Gold Toa, 1 Silver and 2 of some other different colors). There is Destiny and all, but I ask, wether or not any rules regarding that are planned? Because, well, I feel this is really important.

I personally don’t mind the unbalanced colors, but I understand your concern. If it makes you feel any better, there are some cases of seemingly random colors in canon bionicle sets.

For example, Jaller and Kongu are the only Mahri to not have orange eyes.

Also, Nuurakh (red vahki) and Rorzakh (black vahki) are the only vahki who don’t have the color schemes same colors as the Toa Metru.

If we only have a moc of the group thats going to eliminate well a lot of people, or at least those who don’t know how to photoshop/edit well. I think individual contests is still more practical, especially because of the shield piece rarity. I feel like most people are going to be using the flat gold/silver shield so if its a groupshot submission it’d automatically require you to acquire more parts/make more builds that you may of originally not been planning on.

I meant to say that the group shot Hagah contest would be an art contest.

Ah, gotcha. But still- I feel like people want mocs (myself included)

Eljay has said that the moccists can make a custom shield, and the art redraws it to a hagah shield. Dunno if that still stands, though.