Well I finally finished my entry to the Brotherhood of Makuta topic, but to be quite honest, I’m not very fond of this one. Anyway, here it is. 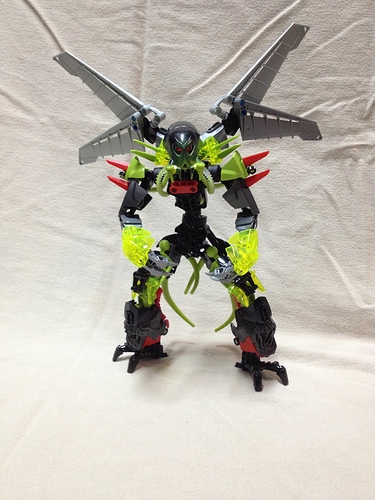 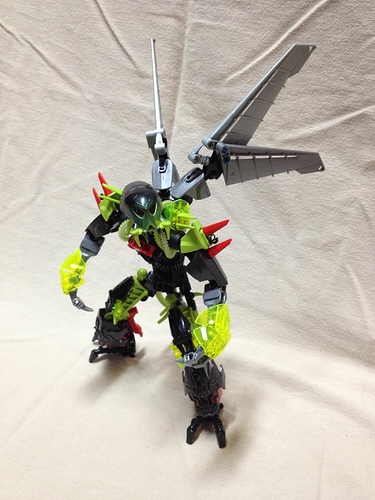 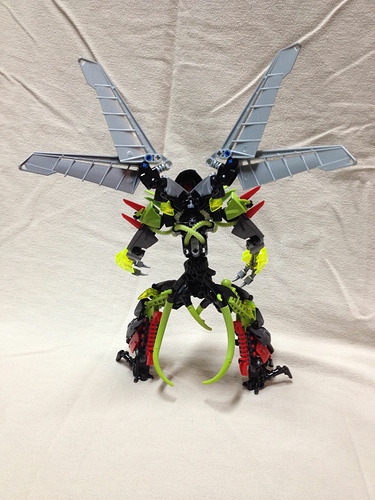 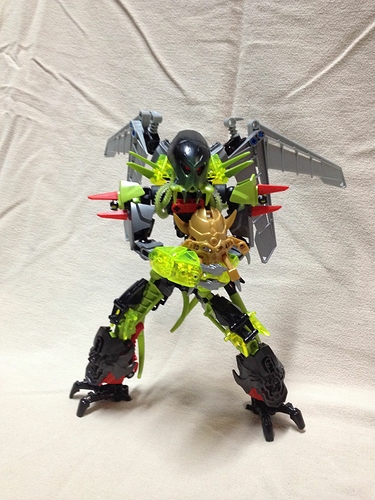 This is the previous version of this MOC so the bio/short story I post here is a bit of a prequel to that one. which I would recommend reading, as well

It was another usual day. Wake up, spawn some kraata, and
torment the local prisoners; not much seemed to happen since the completion of “the
plan”. A few matoran rebellions. All boring. A few old toa on the loose. Amusing,
yes, but hardly alarming. “Nothing happens anymore.” Tak sighed, walking to the
laboratory “Isn’t it all great?”

Tak was, in fact, the only one on Destral enjoying the peace
and quiet. Ever since losing his arms and wings against a toa of magnetism, he
enjoyed the simple things in life. Things like torturing the prior mentioned
captives and “experimenting” on rahi.

Using his telekinetic abilities, he flung open the laboratory
door. His replacement arms were useless, they were made without thumbs as a
prank and Tak was too afraid to demand better ones. He walked over to a long
table with a large beast strapped to it. Four legs, two eyes, a gaping mouth;
nothing too out of the ordinary. However, its point of interest was not
external. The creature wouldn’t die. Scalpel wounds, laser vision and gravity compaction
all proved useless. However, today would be its last. Grabbing it with telekinesis,
Tak slashed the straps, bonding it to the table. He focused his power on two
side of the beast and pulled. The Rahi
made no noises of pain, or motions indicating that he was being pulled apart.

Finally he split and fell to the grown, already starting to
heal. The perplexed makuta walk over to the beast. Halfway buried in the creature’s
insides was a gray jagged looking mask. Tak pulled it out. Suddenly, the rahi
let out a terrible wail and died, not wholly healed from his recent altercation.
The mask started to glow, but the light was cold and cruel. Its face gazed with
malevolence, the jagged edges curved like talons.

Tak shuddered, the mask was alive. Alive and evil. Carrying the
mask, he ran to a crevasse in the wall, shoved it in and cast an illusion over
it, making the crack disappear. “I’ll figure this out later,” Tak said, quickly
scurrying out of the room. It’s impossible for masks to move, but if they could
this one would be laughing.

nice work on making the textures, a bit more green in the waist.

Very nice! I like the wings, and the color scheme is very vibrant! The backstory is also well done!

I love this backstory.

The green and red on the moc work very well together

I really like the color scheme here along with all the spikes coming off him.

While I like the lich version of him more, this guy looks pretty nice, too. Just the wings don’t really fit in with the colour scheme and the otherwise rather spiky appearance, but it’s nothing too bad.
He looks like a Makuta and good at that, the colour scheme is nice and I like that you added those hoses. He also looks enough like Al’ Takire, to make his “transformation” believable.
Overall, great job!

The story is well written, I really appreciate that! Great job there again! And you know what? After a little more research and thinking and stuff, I decided that it (as well as Al’ Takire’s) fits into the grey zone between canon and what will be allowed for the Brotherhood project. After all, it seems, like Destral wasn’t necessarily destroyed by the Order of Mata Nui, they just killed Tridax and took the island over for a time, I guess. But when Pohatu and Takanuva visited some time later, Destral lay in ruins - it just might be, that Teridax knew, what no one else knew - there still was a Makuta hiding on Destral and he made his Rahkshi pay him a visit before they would go further south to eventually being released on Bara Magna.

Well, thanks for participating! If you feel like doing another Makuta, you know where to tell me.

Thank you all, for the comments and critiques

it fits in the grey zone of canon and will be allowed for the Brotherhood project.

I like that wing design and the use of the tubes :

I may be a courageous toa, but I am a cowardly Makuta ;-;

nice work on making the textures, a bit more green in the waist.

I’ve got to second this. It’s really well done, and unique… but it could use a bit more green in the actual torso/waist.

You know, I was just thinking about what different masks were used in the Brotherhood Project as a whole and then noticed, that you didn’t tell us, what Tak’s original mask power is. I’m just curious. Is it a Shelek or something else?

oh, oops. I actually didn’t think of that. yeah, lets make it the mask of silence.

####“Your not perfect” some get this plz
He looks awesome, love the color scheme

some get this plz

Looks like if an actually competent and creative person built my old and awful self-MOC, Kappa
In all honesty, looks pretty sweet and I really like your Kanohi-choice~

Hey now, don’t sell yourself short like that. Your SelfMOC looks good.

Nah mate you got that wrong.
My old one before I joined the forums.
But thanks nonetheless, I guess.

Sorry if it seemed like I was fishing for a compliment, that’s actually I got to this cool MOC, by a friend telling me about it.
Good Lord do I dig the Torso and Wings