I heard about the pitch with IRL kid in the actual movie, and thankfully they chose not to. I think that would have been a major put-off for any new coming fans and probably current ones. I feel bad for whatever alternate reality where that movie had to exist in.

I wasn’t sure what to put for the “what year did you become a Bionicle fan” question. I first discovered Bionicle when I saw the sets in a late 2005 Lego catalog. The Toa Hordika, and the Visorak, and the System playsets…goodness, they looked so awesome to 5-year-old me (and I still think they’re cool to this day). But the 2006 sets were just as awesome, and that was where I started to familiarize myself with the story.

So, how can you be a BIONICLE fan pre-2001? Unless we’re talking about slizers or roboriders, I don’t see how that’s possible.

Also, hot take: Legends of Metru Nui is the only good BIONICLE movie, and even then it has plenty of problems.

There was some sort of early release of Bionicle in Europe from what I’ve heard.

Early releases, plus some teaser info and comics were released pre-2001.

See, the first question is weird for me.

To be honest the “year I got into Bionicle” is kind of a guess for me. I’ve had Bionicle sets as long as I can remember, which means that I don’t really remember when I got my first set.

Was also interesting to realize that Psionics is now my favorite element. In the past I’d have gone with Air or Sonics, and they’re still probably the ones I’d pick if I had to use one, but there’s just so much cool stuff you can do with Psionics.

My brother and I had the Hahli Mahri Set from 2007, So that was my first set, and the gateway drug to Bionicle. Although I consider 2008 my favorite year as I loved it in general.

Kopaka was my first, Tahu was my brother’s first. He passed away back in 2015. Still having his Tahu means a lot to me. 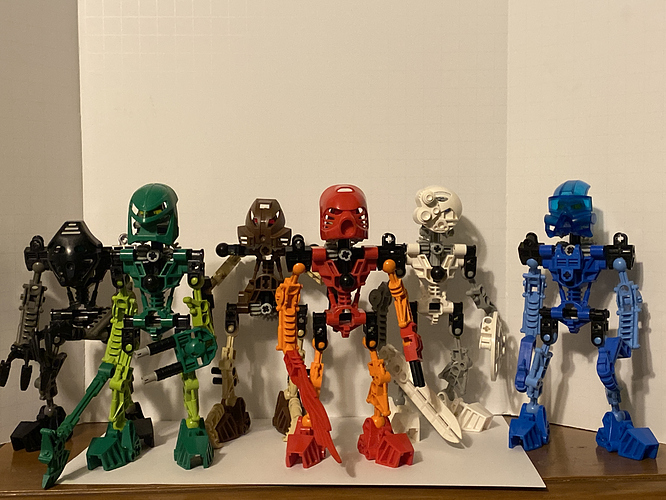 Like some have said before me, my first exposure to Bionicle was from sets from 2001-2003, and a bunch of Throwbots and Roboriders, but I bought my first sets in 2005, and only began to follow the story around 2013, when I found the books at my library.

@BeginnerBonkleCollector, how did you become a fan?

Kopaka was my first, Tahu was my brother’s first. He passed away back in 2015. Still having his Tahu means a lot to me.

This is so wholesome!

But, I’m so sorry for your loss, so sad

Technically speaking, my first exposure to it was when I was a toddler, when I played with my aunt’s Mata Kopaka, Mata Lewa, and Pahrak. I liked them because they were cool robots, but not much else, and kind of grew away from them. It was Nick on Planet Ripple’s LEGO Rewind video about Bionicle that really got me into the series, so I reached put to my aunt and she lent me her figures. That really got the ball rolling, and now I have a decent understanding of Bionicle’s lore, and a small but decent collection of the toys.

Seeing as not giving a “no vote” option for the movies has sparked a big discussion about whether or not they’re any good, thought I’d share my opinion:

I don’t love any of the movies. They’ve all got weak spots, they’re all pretty flimsy as introduction points to the franchise, and the production quality isn’t top notch on any of them. Compared to nearly any “really good” movies, I’d choose those over the Bionicle movies.

But inversely, when you compare them to other direct-to-DVD movies, or other movies that basically exists just to sell plastic toys, they’re honestly not too bad. I was surprised to hear people who have seen the movies for the first time were “pleasantly surprised” by the quality, and I suppose that I’ve always viewed them as bad because I’m a lore nerd who knows that some of the Bionicle stories are easily capable of being told by way better movies than the ones we got, so often I forget that when you look at the actual market they were in, they’re comparitively strong.

I will say I’m surprised that WoS is as high scoring as it is - I’d personally easily prefer TLR to that.

In addition to the stuff other people have already mentioned, Quest for the Toa (Tales of the Tohunga, at the time) I believe actually launched a year prior to the main line, if memory serves. I put it there as a bit of a hunch, but obviously at least some people were hooked on the line before it even launched proper.

I accidentally clicked water instead of light and now I cannot change it.

Click show vote and then you can change it.

I don’t love any of the movies. They’ve all got weak spots, they’re all pretty flimsy as introduction points to the franchise, and the production quality isn’t top notch on any of them.

I disagree. Mask of Light was what got me into the series and I never heard of Bionicle before watching it (granted, the dubbed version is much better than the original, as I explained in this topic), and given the fact that I’m on this forum 17 years later, I’d say it did a pretty good job at introducing me to the franchise