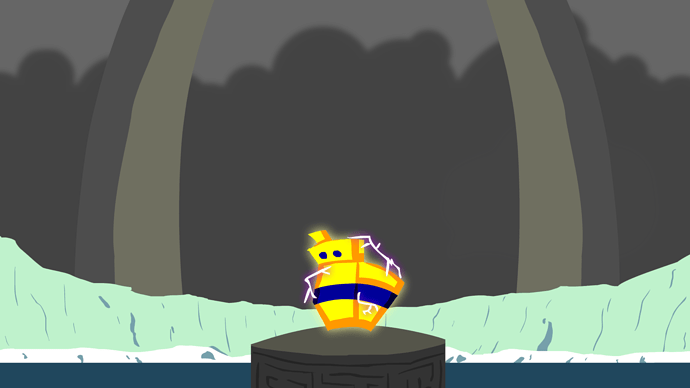 A story about the begging of a friendship and supernatural weather. 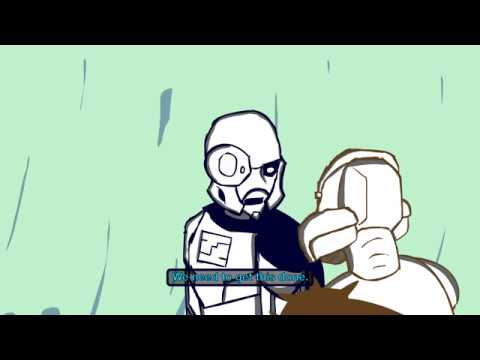 You might also want to watch it as soon as possible; the use of sound effects and music might count as copyright infringement. So we may have to reupload it without music. Or sound. The sound mixing is pretty bad anyway, since I had to edit some of it in Flash. Headphone users should seriously beware.

After who-knows-how-many weeks, it’s finally over. The characters and backgrounds weren’t meant to look too great, but I ended up gving it a bit too much detail anyway, considering animatics usually don’t have a lot of color at all. Forgive me if I go too off model several times or if a lot of it looks wonky.

This isn’t one whole pitch as much as a video comprised of a few mini-pitches. This whole short could be either a final scene or the premise for an entire episode. Pohatu tagging behind Kopaka, trying to break down his walls while looking for a fragment. What Pohatu ends up seeing is purposefully vague, to save Izotor’s backstory for another episode, but give him something of an idea of what happened and who he is.

PS: I didn’t put much effort into the designs of the fire-spitter or Kurahk. No voice acting either.

Okay, this is pretty awesome. You guys did a great job with this animatic, I would gladly watch this another ten times!

Now I really, really want a show for this. The cast is planning on doing something like this, right?

This is pretty cool! I can totally see this being something in the vein of a Samurai Jack episode or something.
Btw if you ever need sounds or custom music cues, I’d be happy to supply.

That’s actually something we seriously discussed.
We didn’t end up asking because of time (@Ragdoll wanted to finish the animatic by thanksgiving) and didn’t meet the deadline anyway.
We’ve also heard scoring to a temp soundtrack is kinda boring/frustrating for the composer.

This is amazing. I would love to see a fully fledged web series out of this. Though I am a little confused by some things, like Pohatu’s name not being Pohatu, and the entire flash back sequence made no sense to me. Though honestly that’s more me knowing nothing about G3’s story. I’m surprised at how its nothing like G1. Like, even more different than G2 was to G1. (Though that’s not necessarily a bad thing). As for the animatic itself, it is really good. Has a very MTMTE-ish vibe to it.

Very nice. You’ve really made the animation style of the Toa grow on me, and everything about this just feels good. I would take the entire Brickonicle story like this, if someone could make it.

Btw if you ever need sounds or custom music cues, I’d be happy to supply.

Yup, we talked about it. We didn’t end up doing it mainly because of time. We really would’ve liked to see what you’d do with it.

Though I am a little confused by some things, like Pohatu’s name not being Pohatu

He is called Pohatu, he’s just trying to get Kopaka to open up by being honest about himself. It’s a small disagreement we have with the TTV cast that their old names should be irrelevant after they become Toa.

and the entire flash back sequence made no sense to me

I’ll concede that this is mostly my fault. In @Kaituhi’s original script, it was still pretty vague on purpose, but I tried to make it a little more exciting by having Pohatu interact with the vision a little more when I animated it with the Fire-Spitter chasing him. That along with the last minute backstory change for Kopaka TTV did recently with Matoro being murdered made me change it even more so it would fit to the current canon. I ended up muddling everything a little.

We also wanted to post the original script pdf. here but wouldn’t know how to upload it or where.

hey @Ragdoll, @Kaituhi. i have a question in regards to the fragment.

when i saw it spark with electricity and the storm’s lightning had a similar color to it, i wonderd if you had taken some inspiration of the “corruption idea” images i had commissioned from Oomatu a long time ago: 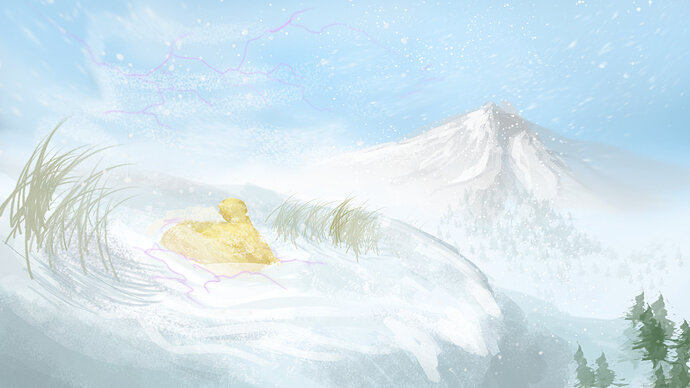 Just amazing. I’d love to see more of these with the other Toa.

This is great, I love how at the end Kopaka gives him his cloak. It is just all so good.

We’ve also heard scoring to a temp soundtrack is kinda boring/frustrating for the composer.

Oh definitely not, far from it. Having reference material is very helpful for us, since often times directors and clients don’t exactly know how to explain the sound/motifs they want. It saves a lot of time and cuts down confusion of what the exactly the client is envisioning.
But yeah, @Ragdoll and @Kaituhi, feel free to message me if you need stuff in the future.

Very neat. Probably just due to the characters and environment, but that reminded me of Vrahnu’s film.

Holy crap this was amazing.
Not only is the animation great, but the writing is phenomenal, the characters feel really good and the music fits so well.

if the entire show was this quality of writing then it would be quite possibly the best animated series ever.
The animation obviously isn’t professional qualilty due to it being done by only one person but I love the style and I think it would be amazing if it was done by a full studio of people.
10/10

when i saw it spark with electricity and the storm’s lightning had a similar color to it, i wonderd if you had taken some inspiration of the “corruption idea” images i had commissioned from Oomatu a long time ago:

In the original script there isn’t any lightning. It was something Rags improvised, because what I wrote ended up not fitting the soundtrack used. Either he hasn’t told me that that’s what inspired him, the whole thing is a coincidence, or he saw your pitch, forgot about it, and then “came up with it” himself.
Speaking of scripts… time for some behind the scenes stuff. 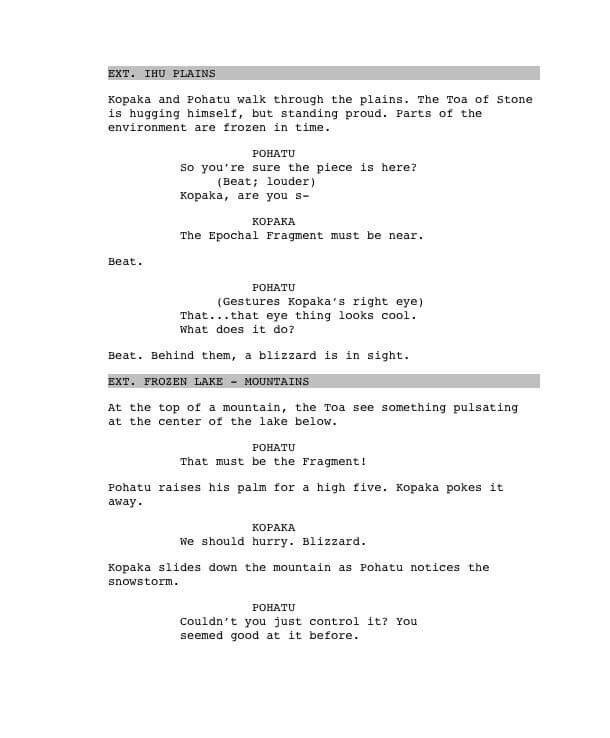 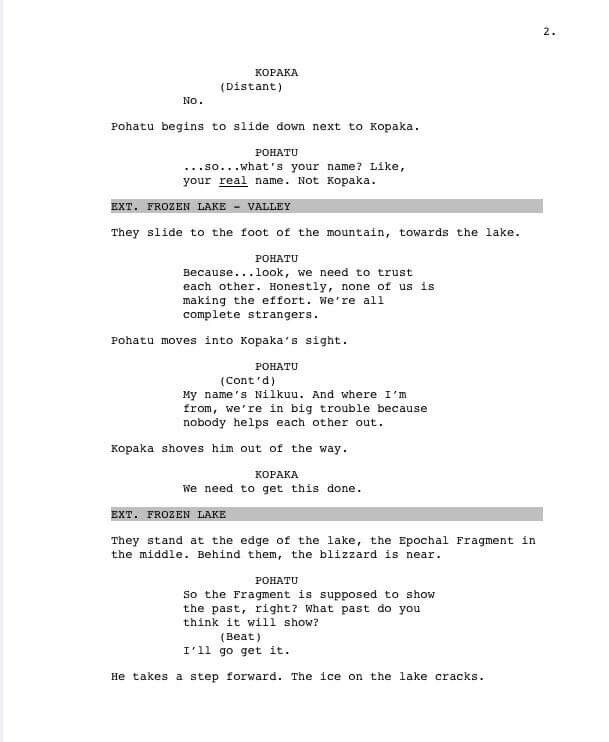 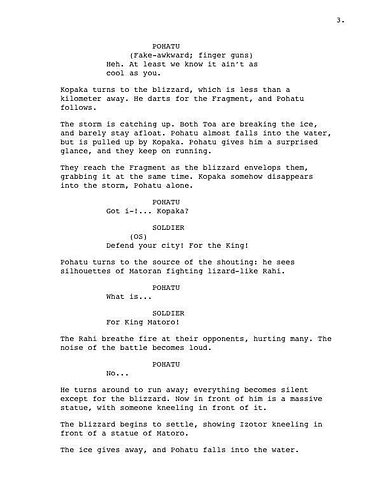 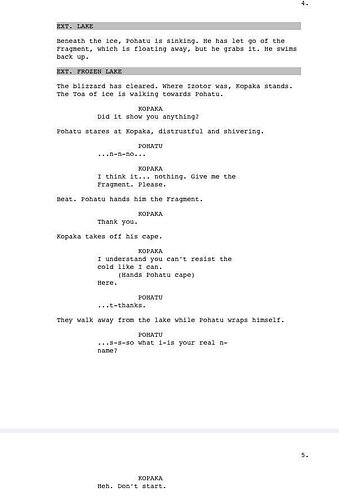 Also, if you read the whole thing, you may have noticed that the whole vision is both identical and different from the end result: for one, it was based on the idea that Matoro’s death was an accident. Also, the vision was a part of the snowstorm - the image that inspired me to write the whole thing was Pohatu stuck in a blizzard, slowly realizing he’s in the middle of a battlefield. No flip-flopping through set pieces, Pohatu is always over the lake, seing the silhouettes of the fight with the Firespitters… but he can hear everything.
Now for some concept art, courtesy of @Ragdoll: 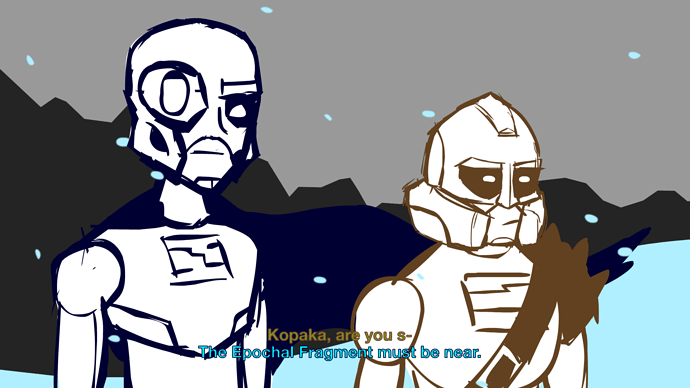 BIONICLE - The Epochal Fragment [ANIMATIC].png1920×1080 218 KB
Piece of trivia: This was posted on the boards before he’d even started with the animation. It was meant to test how an animatic would look like. 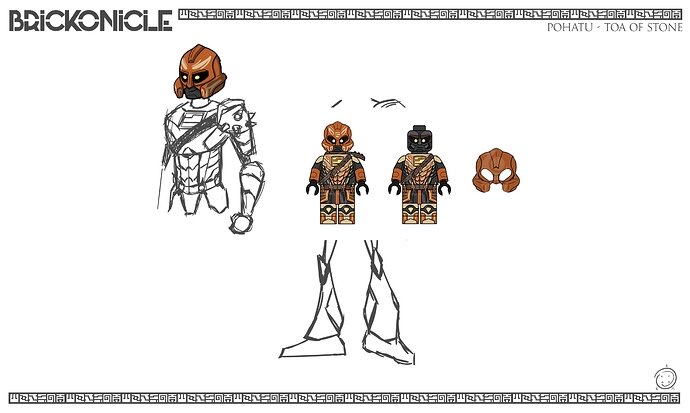 This is amazing. Also love the artstyle.

Tip of my crown to you.

That was awesome! Um… my question is (I don’t know if anyone noticed) is the reason that it’s snowing and storming when the island is supposed to be frozen because it’s near the fragment?