Brezika, Guardian of the Sun

This is my Self-MOC, Brezika. Brezika has the title of Guardian, along with his element, which is Sun. He was an islander to Okoto, guarding and assisting the Protector of Earth, but after falling into a pool of energy, he was transformed into a large being. He was then appointed by the protectors to find Umarak and the Elemental Creatures.

He is a gentle, shy type of persona, but he will defend his close ones.

The MOC is supposed to be a combo of System, Technic, and CCBS, with some Bionicle G1 Parts to contribute. I tried to give the MOC a Technic and Bio-Mechanical feel. I also tried a custom torso, based off of TTV Message Board’s @Dingus s Design. I really like how it turned out.

Have a great Easter viewers, and I hoped you enjoy. 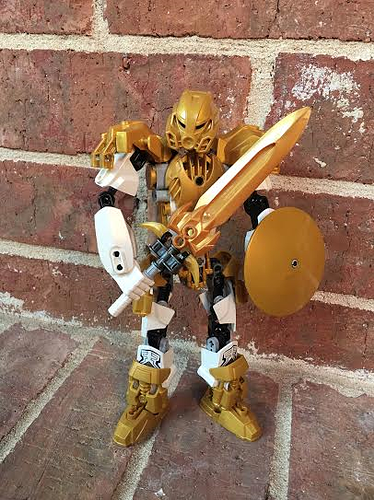 That’s pretty fancy. I like that you used white instead of red, a great color scheme while still looking hot and not cliche.

But hot at the same time.

Thanks for the feedback! I’m happy to hear this about my MOC! It took a while to get it right, but I’m pleased with what I did.

I like the techniques used in this. In all it’s a quite cohesive and solid MOC with surprising a not too OP backstory.

One thing that bugs me but can’t really be avoided is the sword is a little orange.
Nice

Thanks. About the sword, it’s those Knight’s Kingdom Pieces. They came out 1 Year before the Pearl Gold Color was released, I’m pretty sure. Instead of using the original Gold from Bionicle, LEGO used this Bronze-like Gold, which doesn’t work too well with Pearl Gold.

I believe you mean “bugs”.

The build of this MOC is awesome, but I can’t help but think that the colour scheme is a bit plain.

his element, which is Sun.

So, what? Is that like light and plasma combined?
Or just a fancy way of saying he’s a toa of light?

It looks fine, the arms seem kinda off though.

his element, which is Sun

Hey Hey, I actually did something useful!

I’m really impressed by this MoC, especially when I had a part in it!