Hey, there, everybody! This is my very first topic! Yay!

Ok, let’s be serious. I have been working on this creation since the first day after the TTV announced the Brickonicle. I work very hard on it, and I even deleted it one time. The b1 picture is the present version. 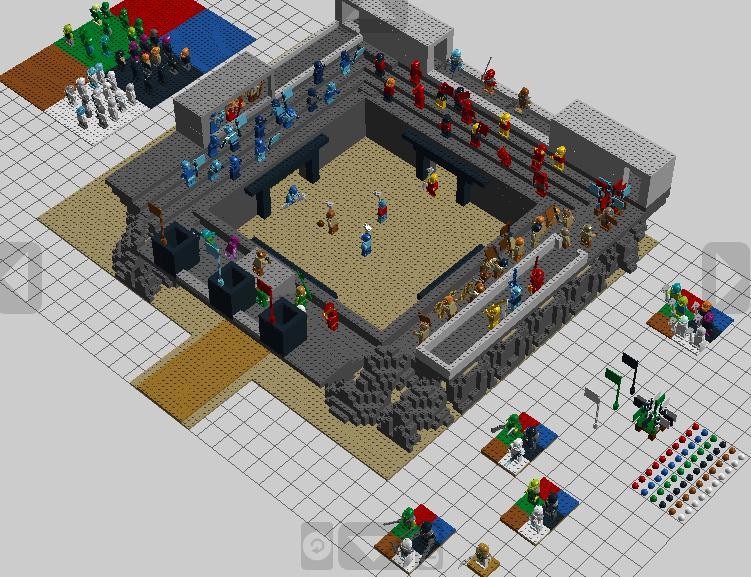 This is my big Kohli arena. Initially, I wanted to make the one based on the first movie, but then I understood I can do something customed, too. This arena, in my story, is in Po-Koro, and the Po-Matorans plays the finals with the Ta-Matorans and the Ga-Matorans.

The build is made from five mane sections. 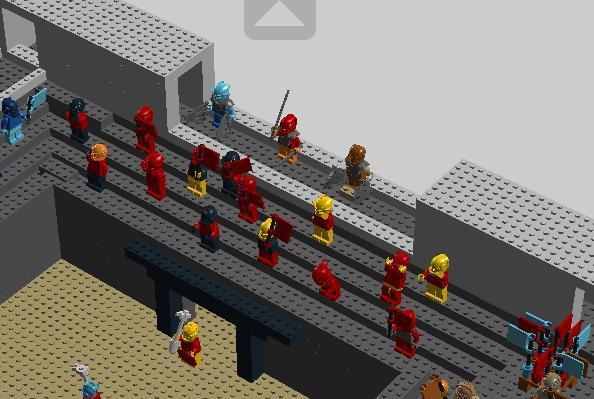 The first section (b2) is the first tribune and a VIP room. The tribune is full of Ta-Matorans who are very excited about the finals.
The first VIP room (b3) is occupied by three Toa Nuva: Tahu, Gali and Pohatu, each one with his armor and weapons. From the VIP room start two corridors that make the link between the three VIP rooms. 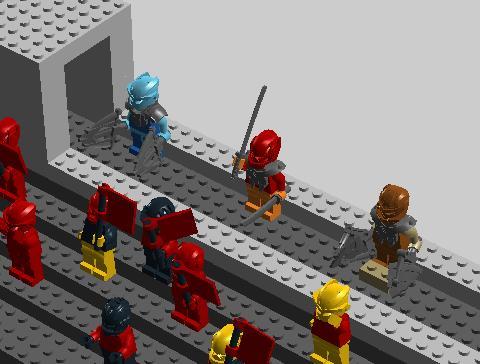 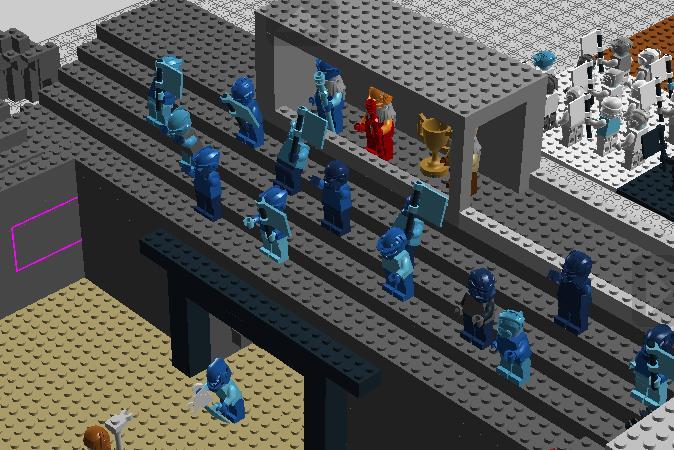 The second section (b4) is the second tribune and another VIP room. The tribune is full of Ga-Matorans who scream: “GO GA-MATORANS!”

The second VIP (b5) room is for the Turaga. Now there are three Turaga: Vakama, Nokama and Onewa. You can see a trophy there. This trophy is for the winners. 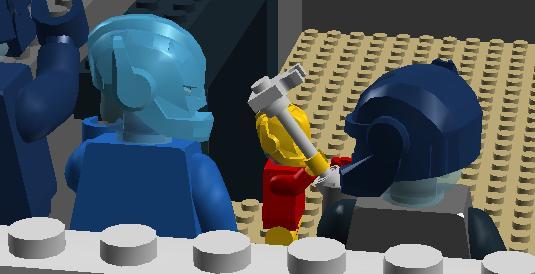 Above (b6) you can see how Jaller has some fans. 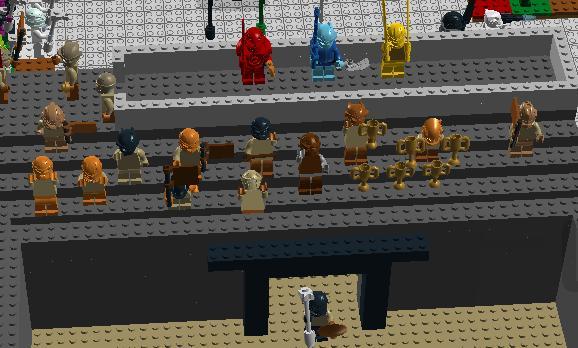 Above (b7) you can see the third section, with the third tribune and the last VIP room. This one is for the Po-Matorans. 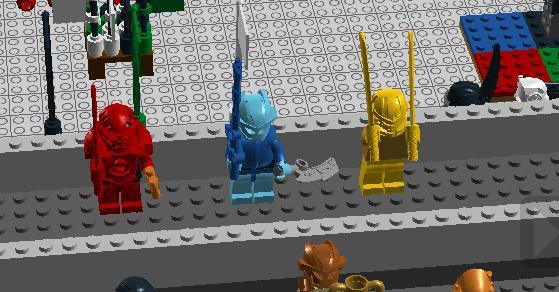 Ok, I couldn’t stop myself from adding these three Toa… These three minifigures (b8) from the VIP room are self-minifigures from my custom Toa Team. The Toa of Fire is my self-moc, Vladin, the Toa of Water’s name is Rena, and the Toa of Stone is Mark. All of them are self-mocs. 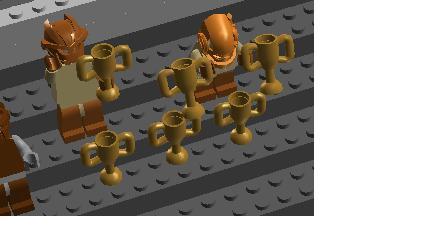 Above (b9) you can see how two Po-Matorans, who are Hewkii’s friends, have Po-Koro’s Team trophies because they want to encourage the team. 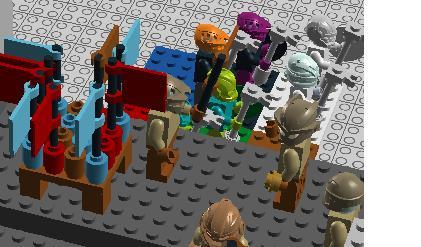 The last thing from this section is a flag store, at least, a mini flag store (b10)! You can see how a kid convinced his mother to buy a flag for him. The seller has flags for each team. 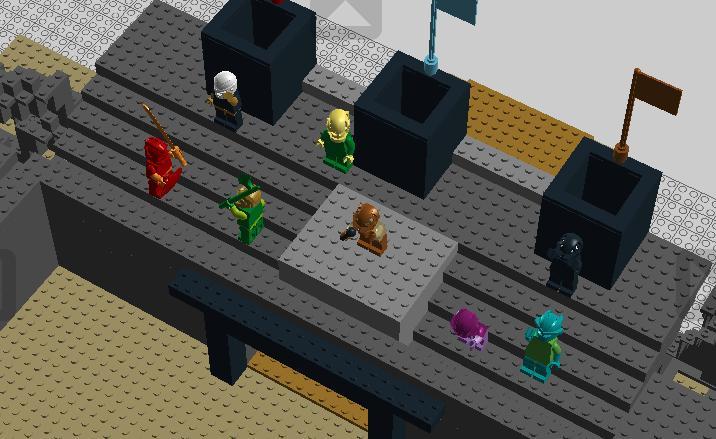 Ok, this is one of my favorites (b11)! The last section has the commentator’s place, and the three recipients for the points-ball. You don’t know who the minifigures are, but look again! The Minifigures are self-minifigures from some folks from the TTV Crew! The one from the Ta-Koro’Recipient is Mesonak, from Ga-Koro’s is Varderan and from the Po-Koro’s is Ven. The red and green Toa are Eljay and Kahi (I don’t understand, Kahi is Jonathan?) who try to not fight. The purple Toa is Purple, and the green one is Viper. 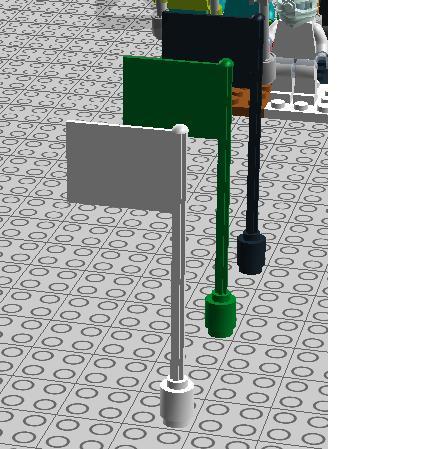 This flags (p12) are useful if you want to make a game using the Le-Matorans, the Ko-Matorans or the Onu-Matorans. 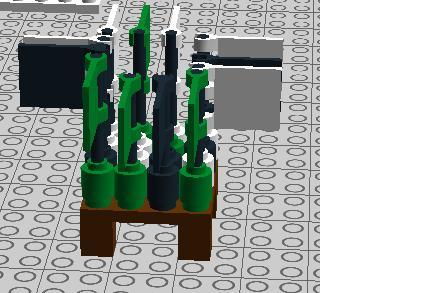 The table (b13) is for the seller. On it there are flags for the other three tribes, but, of course, you can make any combination. 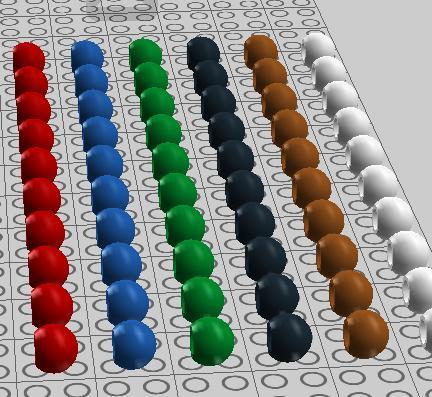 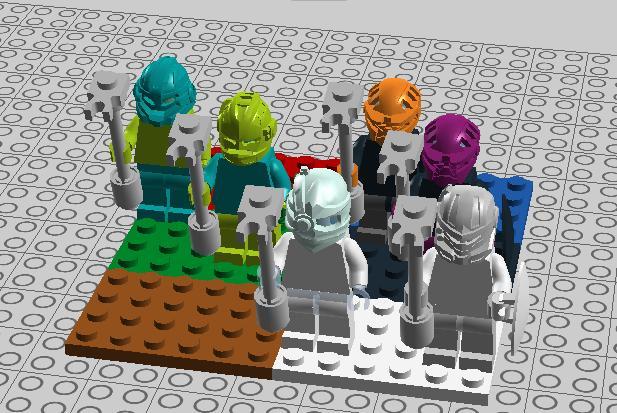 These are the other three tribes’s players (b15). From Le-Koro, we have Kongu and Tamaru! From the Onu-Koro, we have Nuparu and Onepu! And from Ko-Koro, we have Matoro and Kopeke! They are on display plates. Here you can put Jaller, Takua, Maku, Hahli, Hewkii and Hahu as well! 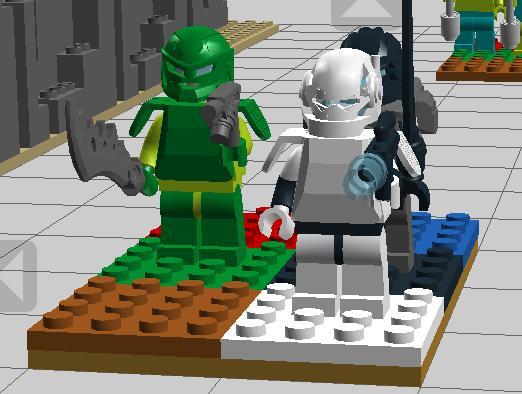 These are the other three Toa from my team (b16). The Toa of Air is Ghabix, the Toa of Ice is Termo, and the Toa of Earth is Octavian. All of them are self-mocs too! 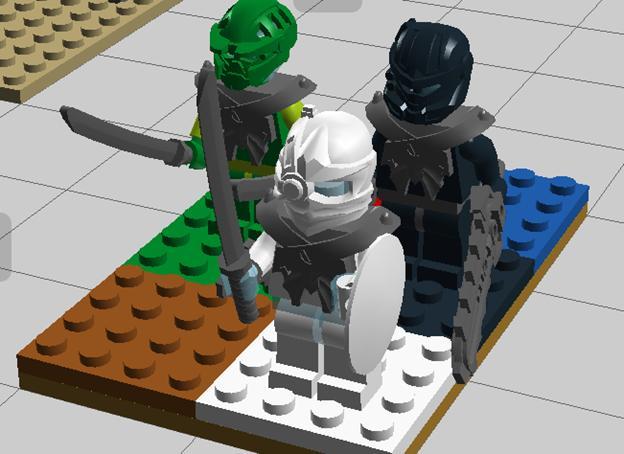 Here are the other three Toa Nuva (b17): Lewa, Kopaka and Onua. 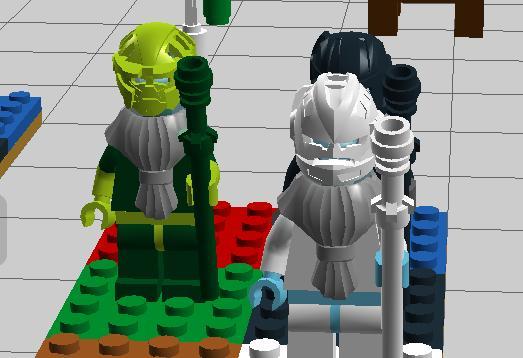 The next three figures are the Turaga (b18): Matau, Whenua and Nuju. 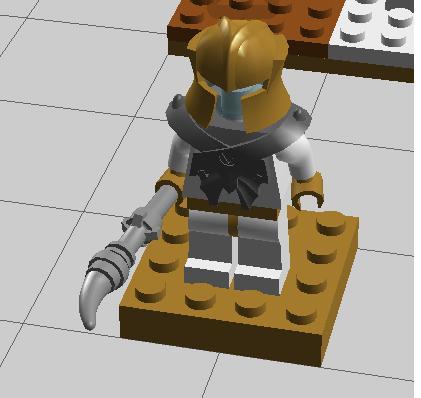 And here we have a Takanuva minifigure (b19). You can make a story with it. After Takua became Takanuva, he was nostalgic after Kohli, so he went at one of Jaller’s games. 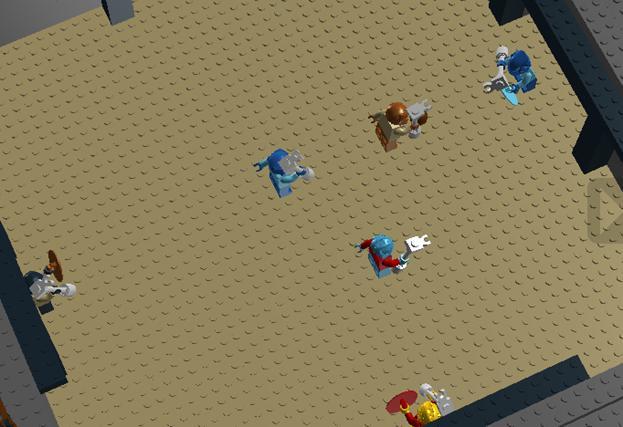 The fifth section of the arena (b20) represents the playground, where, right now, the teams play Kohli. It seems Hafu already know Hewkii will make a point, while Hahli and Takua try to take the ball. 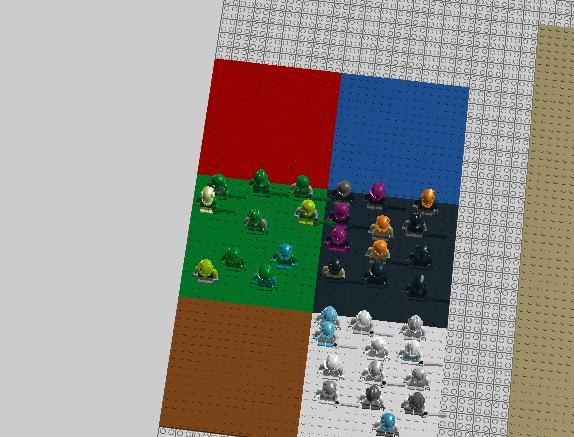 This is the last thing I want to show you: the display plates for the Matorans (b21). I made very much Matorans for this set. When I was making them, I looked at the Bionicle Wikipedia to inspire myself for the Matorans. 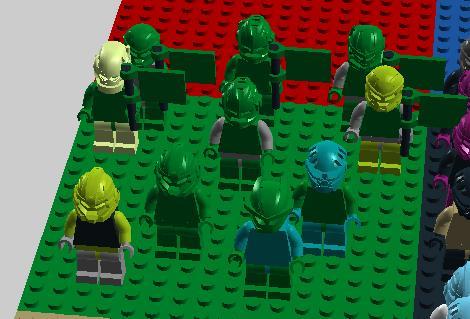 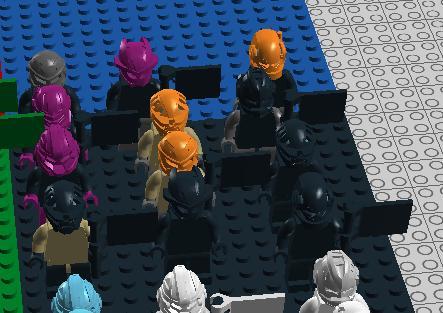 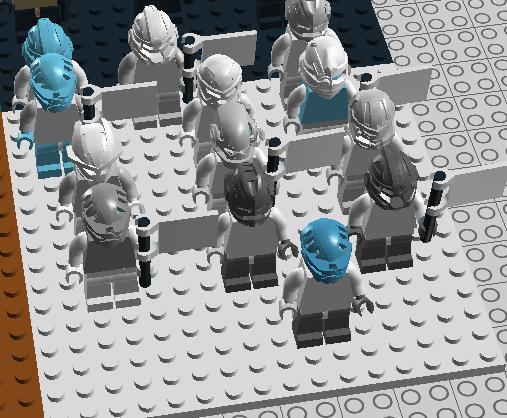 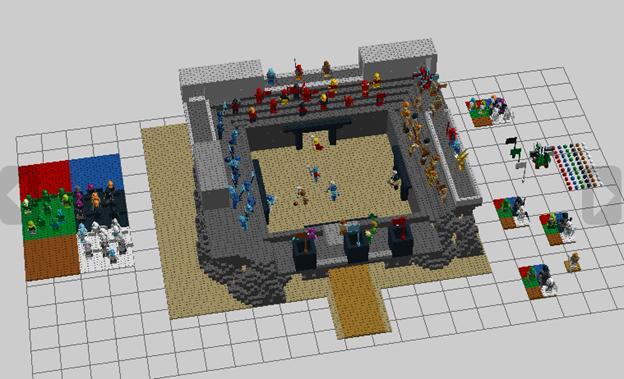 I hope you’ve enjoyed my entry (b25)! And I hope I will win the contest (even if, personally, I see a lot of awesome entries, and I like some more than mine, not because of the shape, but because of the content).

Special thanks to Eljay, because he helped me.

Can everybody tell me how can I link this page to the Brickonicle.

It looks nice. Reminds me of the Kohlii scene from the first Bionicle movie.
I also like the addition of the Onu-Matoran, Ko-Matoran and Le-Matoran.

Dude, this is awesome.

I have to say, you did a good job with the Arena itself…but I don’t know how good of a set this would be. Too many BURPs, kind of bland architecture. Not my favorite.
But I do like all of the variety you have between all of the Matoran and Toa. They definitely look like a big community.

This is amazing, the scale of the build is impressive and you still managed to maintain the look of the actual Kohlii Stadium. My only problem is the Toa/Turaga, but for the life of me I’m not really sure what’s wrong with them.

yea, everything feels… off

it’s too blocky, and has no real play features.

like, even if we factor the UCS part into this, the main structure is WAY too blocky, with no slants whatsoever

These are the other three Toa from my team (b16)

While locations and vehicles do not have to be, we do require that the minifigures be canon characters from either Generations from BIONICLE.

This is the perfect example of bigger is not always better. It’s essentially a big bunch of bricks and BURP’s (big ugly rock pieces) and at 145 dollars I think this would not be a good Lego set.

As for the figures I can’t really criticize them much, but the turaga just don’t work, the beards look very out of place.

I can see your ambition, but this is a terrible set, its just a box, with the exterior covered with rock pieces, that don’t even hide everything.
The entire think is just a square everywhere you go, theres no detail, just bricks.

It looks rather lacking, to be honest. It feels very plain in textures and doesn’t look very interesting, and the major use of specialized pieces leaves me to assume this is a rather boring build. If you want to represent this location, I’d recommend starting from the ground up with a wider variety of unique techniques, instead of a heavy reliance on large parts that don’t really convey a structure.

I hate to just say “start over,” but I can’t think of anything else.

I’m gonna be honest, this would not be a LEGO set.

You need to minimize the set immensely - smoothen out things, and a full circle would not be the official design. Maybe a half circle at best with a gate or something in the middle? Keep the minifig count between 5-8, add some texture, some cool play features and then it’ll look better. For now I get what you’re doing but I think you could do a much better job.

This looks pretty good, but by god is it big!

I honestly don’t think its all that worth it. I feel like its just a bit too blocky and basic to justify such a massive price. Come to think of it, I don’t think anything classified as a toy could be worth over a thousand dollars.

Come to think of it, I don’t think anything classified as a toy could be worth over a thousand dollars

I feel like this set is just bad, it’s very simple and bland, has pretty much no detail what so ever and uses too many burps.
It does not look like a set at all let alone a UCS set which it usually filled with detail.

Well when I looked at it, I saw a comma, not a period. I still think its a bit much for a lego set though, especially one as blocky and basic looking, as I said prior.

This is awesome! I really like the fact that you’ve included Matoran for other tribes, and even you’re own Toa Team. I’d be interested to read about them if you make individual topics.

It’s cool, but it’s very blocky and plain, as others have pointed out, and although you made an effort to include all the tribes and such, I think a smaller diorama of the movie scene would be just fine. This does look like it could be turned into a board game of some sort. And yes, the price seems much to high for what the set is.

despite being frickin HUGE,i feel like the build is kinda boring

@BBricks What is wrong with them?

I didn’t make the rules.

no non-canon figures are allowed. the matoran are one thing, but what screwed you over was the toa.