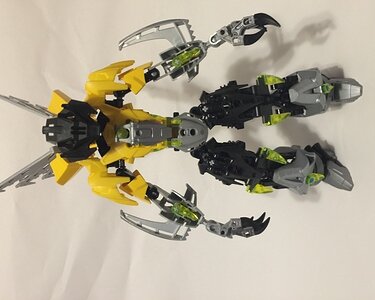 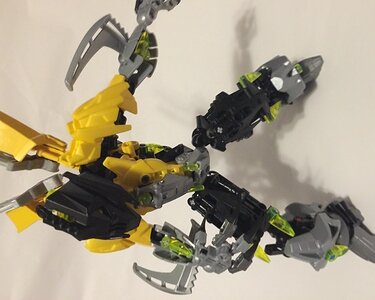 651C268C-05A4-4E18-BC89-CDD68B758947.jpeg3264×2448 1.62 MB
Backstory: Makuta Izymid spring from the antidermis along with all other Makuta. He was oddly dramatic when compared to his fellow Makuta, far more outgoing and painfully oblivious to the opinions the others had of him. The most important thing to Izymid was speed. Having been created with a Kakama, he always strived for more and more speed, even going so far as to install jets in his feet and wings. He served primarily as a high priority messenger for the Makuta, running from post to post bearing information too important to be trusted to servants.

Izymid admired Toa greatly, as he deemed their sense of justice “heroic” and “poetic”. He admired them so much that when not on duty, he would act as a vigilante known as Kakamakuta. He would theatrically save those in trouble, but often caused more trouble than he solved. Unfortunately for Izymid, Miserix got word of his escapades and put a stop to his reckless behavior.

After the fall of the league of six kingdoms, Izymid got an order to inform a fellow Makuta of an insurgence of league troops on a small island. Izymid left to deliver the note, but changed his mind mid flight and decided to deal with the threat himself. Unbeknownst to him, there were far more troops than he had estimated. He fought valiantly and nearly killed all offending troops, but he grew too tired to defend himself from the last few mercenaries. He was beheaded, and his Kanohi and augmentations were stolen.

The mercenaries disappeared soon after, and Izymid was buried by the local islanders. A servant of the brotherhood discovered his grave while investigating his disappearance. The tombstone read: “Here lies a being who slayed an army.” Touched, the servant reported Izimyd’s body missing out of respect.

OOC: This moc was a load of fun to make, it all started with the Meltdown pauldrons and jet boots.

@Gilahu, please let me know if any contradictions or moc design changes you’d like.

Any way to turn the pictures around?

Personally I love how his upper body stands out because of the yellow. Legs look neat, too. Arms are maybe a little simple, the CCBS shells on the wings don’t look that good in my opinion and the shoulder pads definitely place looks over poseability, but all in all a great Makuta MOC.

Backstory will probably be modified to some extend eventually, but works for now.

EDIT:
Although, wait - the name first needs to be checked with RSG.

He would probably look cool with Hewki Marhi’s mask, though that’s just the first thing I thought. Either way, he looks cool.