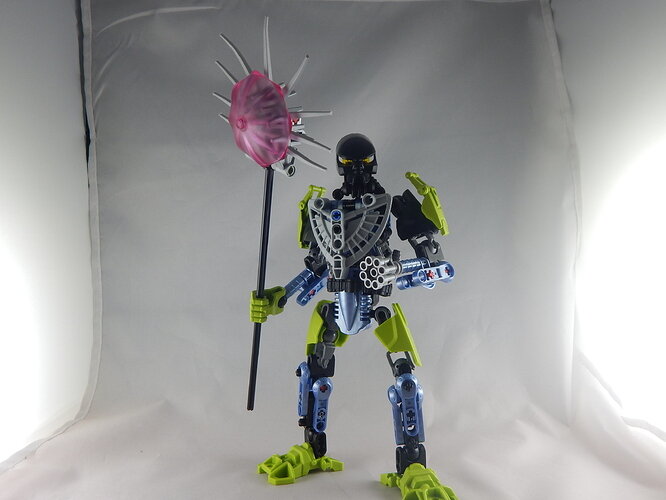 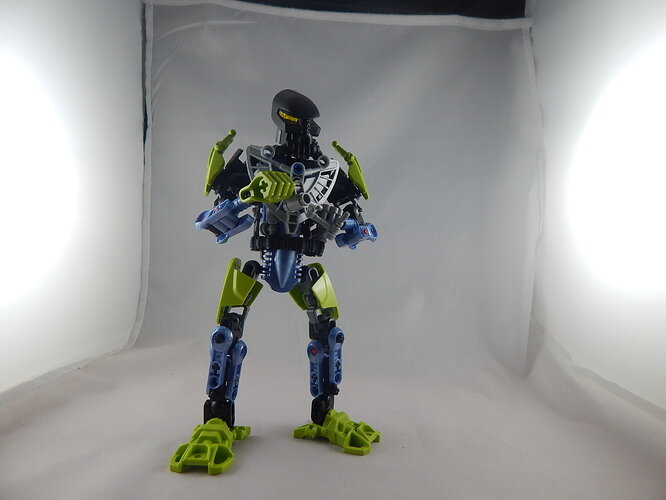 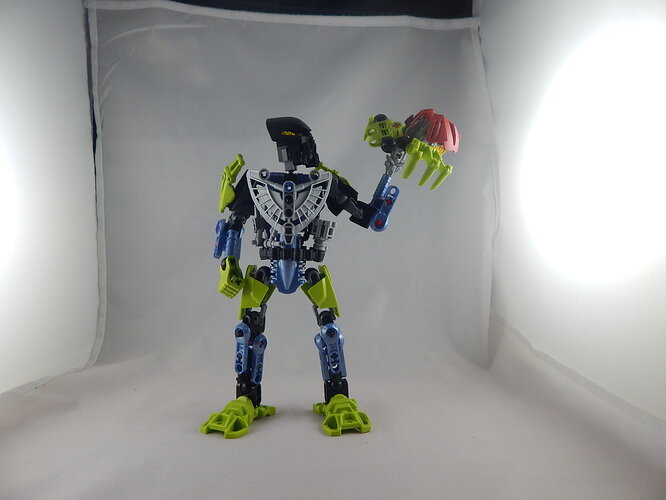 Bio:
Stationed on the island of Loyra, Thiren was a reclusive Makuta, building a multitude of tools and gadgets for the Brotherhood. He lived in a cave close to a Matoran settlement, which would occasionally bring something for him to fix. He was very much an anti-rahi person, reportedly saying that “They ruined his concentration.” and “Got organics everywhere.”. He sided with Teridax at the Convocation. He remained on his island for many years, until being killed by a rampaging Zyglak.

That’s the coolest umbrella staff ever.

Any pictures of the back

Nah. Nothing much to see back there, anyways.

So the back is so bad you don’t want to take pictures of it. OK… Its your moc. But for the most part the front is really good.

It’s not terrible, just nothing of intrest.

That’s some NPU I’m seeing, really all over him.

More black, this MOC is great.

Excellent job! I’m finding these wacky colour schemes to be quite interesting.

Lime and metallic blue mith trans pink on the staff… that’s gonna be a tough colour scheme to replicate once I revamp him. I like teh uniqueness, though.

If I see it correctly he has some kind of tool belt with different “hands” for his left arm? That’s neat. I also see a custom head.

Otherwise nothing too special going on, but it works.

The name “Thiren” is fine, I checked with RSG.

Personally I’m not a fan of how he died, though. Death by Rahi already is pretty unlikely to happen to a Makuta, and there already is one who died by mutated Muaka, if I remember correctly.
Presently no good alternative comes to mind, though… I’ll get back to you on that matter soon. Until then I’ll put you on the list in the project again.

Alright, how about you change killed by a Muaka to being killed by Zyglak? That’s the best I could come up with so far.

Ok, then thanks for participating, MOC accepted!