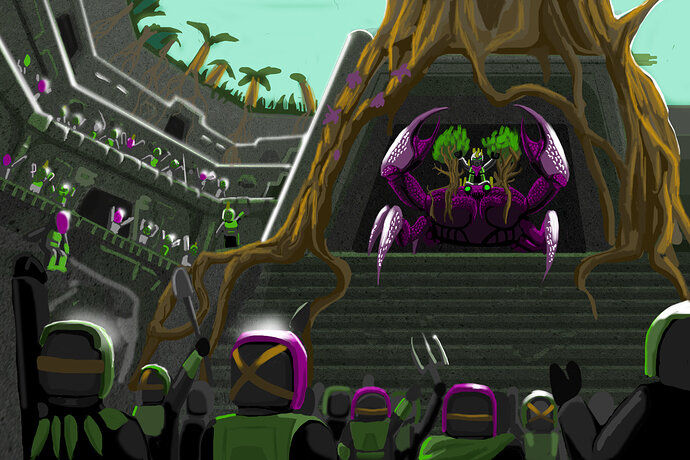 Onua had seen the ashes before but returning to his old house send emotions though his head he had not felt in a long time. The Issues brewing was beyond his control and the scale of things was out of controls.

He remembered the time when a problem was something you could fix with a hammer and a day of hard work. Bring a few friends, or the young ones but this… this would was an undertaking much greater than that of any he had before.
He had left the Earth regions capital. To be out here. All alone he now walked through the ruins that once were his town. The worst part was that he did not know who or what had done it. He sat down where his house in the center of town had been. He sat down.
Meditating as the rain began he did not notice as he drew on the powers from the earth around him. Feeling the energies of the earth around him. The trees as their silent sentinel watching yet never telling anyone what they saw. The rocks and grass ever so distant to him.

Yet now he was more than he had ever been, and he felt nature around him far more potent than before. The trees whispers flew though his head like the wind, the plants of the forest came to live as he meditated.
He would ask them, but he didn’t know how. His wrath, his sorrow and frustration surged though his head into the earth. Asking. Yet something Responded.

Child. What brother you?

Onua snapped out of the trance he did not know what had spoken he heard it inside his head like he heard sound. He looked around and found no one.
The voice was that of an old man. Older than himself. Much older. He had felt a power much like his own yet not quite. It was not toa like his brothers or sisters.
It was… Matoran yet had a magnitude he had not felt before. It was powerful. Maybe even more so than himself. He sat down again, determinated to find out. What had happened.

He entered the Meditative Trance again and found the voice quickly.

“My child. What has upset you?”

Onua did not know what to answer or how to but he found the memories came to him.
“I heard them, I felt their pain too” the voice replied.
Onua could feel a sorrow in the voice too but he did not understand how.
“Meet me at the capital, I shall be there. “ it said.

Meanwhile in the Capital.
“THIS CANNOT GO ON” a matoran yelled as he threw the remains of his old house into the circle in the middle.
A few planks and the scorched remains of the sign that bore his name.

“The entire Island is going mad. There will be war. AND WE CAN DO NOTHING TO STOP IT” Another Matoran interrupted

“Quiet now, we are all here gathered in the sanctum of Tiros heart.” Onepu ,high preist tried to calm his peers down. But to no avail as he could not reach them.
“HOW long until that the Mangaians reach us? Or the Ihus warriors, You think they are going to join us in making candles and brining in the harvest?! The first matoran replied.

They are going to burn and pillage our homes to destroy one another.”: a third matoran spoke out.
It was clear that the Earth tribe was divided. But most of all. They were afraid.
Onepu, an old matoran had agreed on letting the ceremonial circle at the heart of the city to be used for this discussion but it had escalated to no end.
The forum was unwilling to listen to his wisdom. And his power had slipped from him the moment the implication of war was broad up.
He looked up to the giant tablet. A huge stone block build into the wall. Inscribed with the laws and guide lines of the Tiro. Traditions, depicted in detailed and wonderous detail. The script of raising a family and the ceremonial holidays.
On top of the stab a great tree grew. A manifest station of the Earth. Of Terak itself.
He could only pray for a miracle.

As Onua walked into the circle silence spread. He looked around. Each of the matoran eyes were on the hulking frame of their toa. Their protecter and guardian.
Onua felt the weight of their gazes. He as unable to help them as they were to help each other.
Onepu walked over to him. “Onua, how pleasant of you to join us in our discussion” Hoping to quitet down the considerable gathering of leaders and traders…
“I… I was told to go here” he said. “I did not know, If I am interoupting Ill…”

A loud sound rang. The stair way shocked and the plants tussled around the stone they had been growing on for time untold.
Something big was coming.
Silence became anticipation as the sound rang again.
Onua felt the familiar presence of the old matoran. At last the stone tablet gave way. As it began to slide slowly into the ground revealing a hidden passage behind.

At first it looked like a monster but then the awkward realization dawned on the gathered people.
It was a crab, but it was unusually huge. A house worker crab, the largest of them was recorded to be able to pull a wagon, anda normal one could carry a person but in comparison to this it might as well have been a regular crab.
It’s giant limbs slowly guided it out of the darkness revealing a figure sitting on top.
Whispers began as the Matoran stepped away.
The candel on Onepu’s head had been blown out. His jaw had dropped.
Onua in amazement too looked in awe. Some part of this was weird and the other had heard the legends.

This was Ruru. The legends tells of how he founded the Candle head cult and shut himself into a tomb to meditate. He was presumed dead after a few months and the tomb remained sealed.
The ancient matoran opened his eyes. The green glow slowly began build up in his eyes again.
“CHILDREN OF THE EARTH.” His voice rang with the grit and deepness of an old man yet more powerful, casting echos across the atrium.
than anything he had expected.
I have felt how this world has changed. And now it is my time to emerge to right the wrongs of the other tribes. Together we will rebuild the Tiro I know and love.

He raised his arms in a gesture as the elemental energy began to flow around him, the great tree despite out of its season began to blossom again. The elemental power of him was immense. Onua felt he might have rivaled his own power. At the current moment, at least until he gets better.
The crab too raised it’s giant claws.
There will be justice for those that will stand in our way, as the ground they stand on will rise up against them. Terak has blessed us today.
For I have returned.
Onepu could not belive his own ears. Was this guy telling them that he was a messenger of the gods?
Impossible, yet he had seen his elemental power and he more than any had felt it.
Today. WE march to war. For the eternal summer has started! 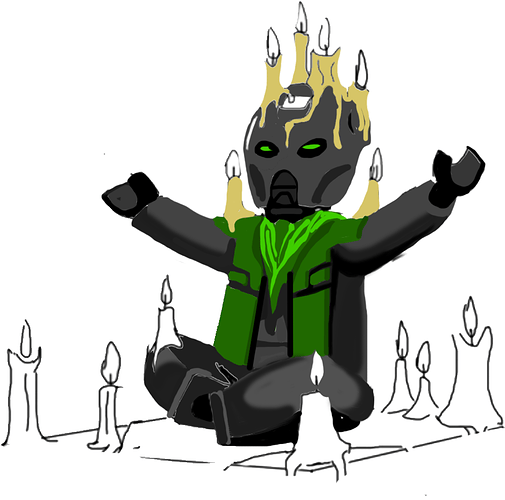 Feel free to give some feed back.

that crab has some nice pecs 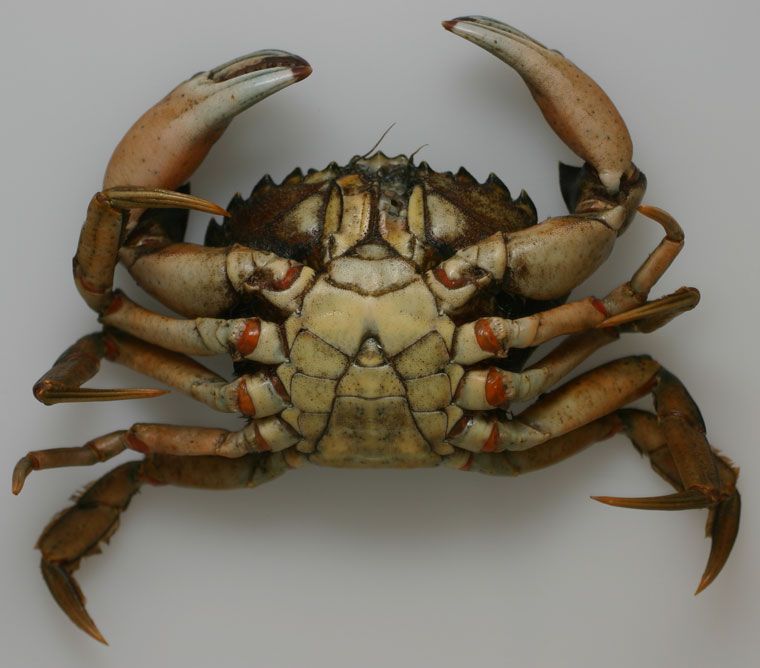 what I see in the drawing, is a crab showing it’s muscles with a happy face, and mad eyebrows

Ahh yes. My last attempt at being relevant…

cool but a candle-head cult? what’s with that?

Have you player the Mata Nui online game?
There is a scene where you see a group of onu-matoran who wear candles on their head. There are two on the side an one on the center. Behind you see something that resembles an altar with a lot of candles on it.

People started saying it was a cult, due to the altar. Hence the candle head cult was born. 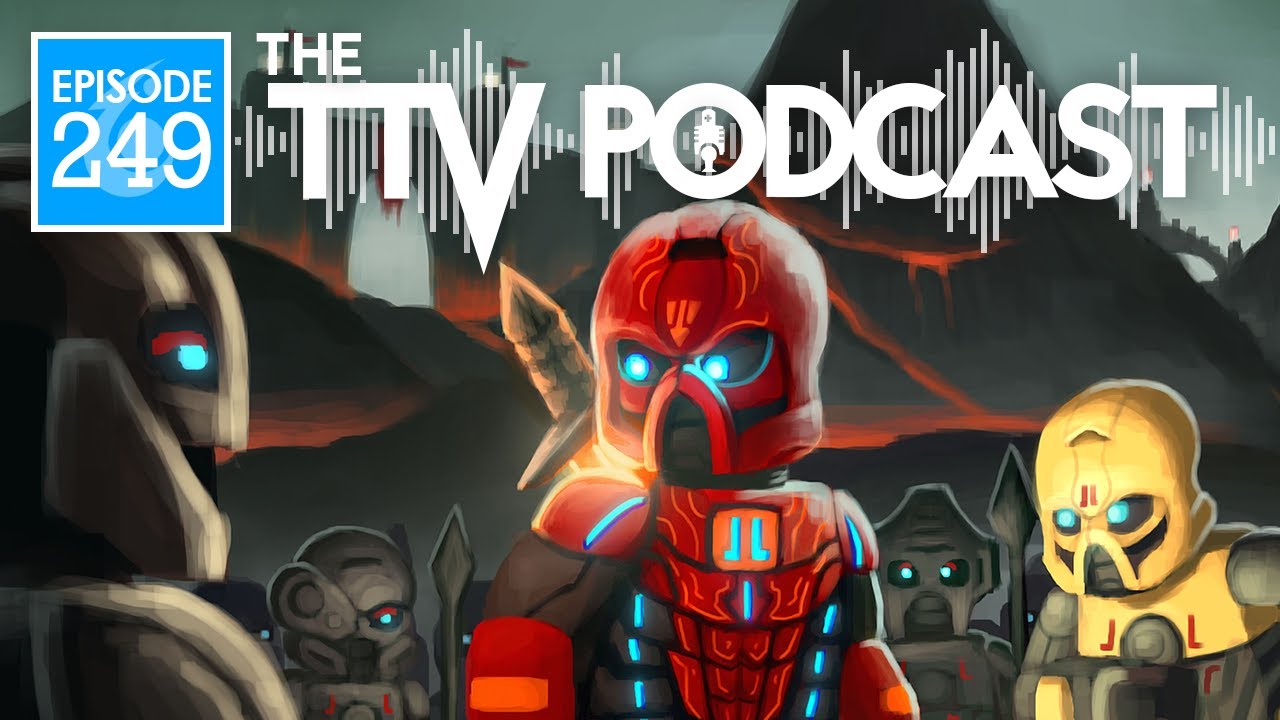 Here is the video 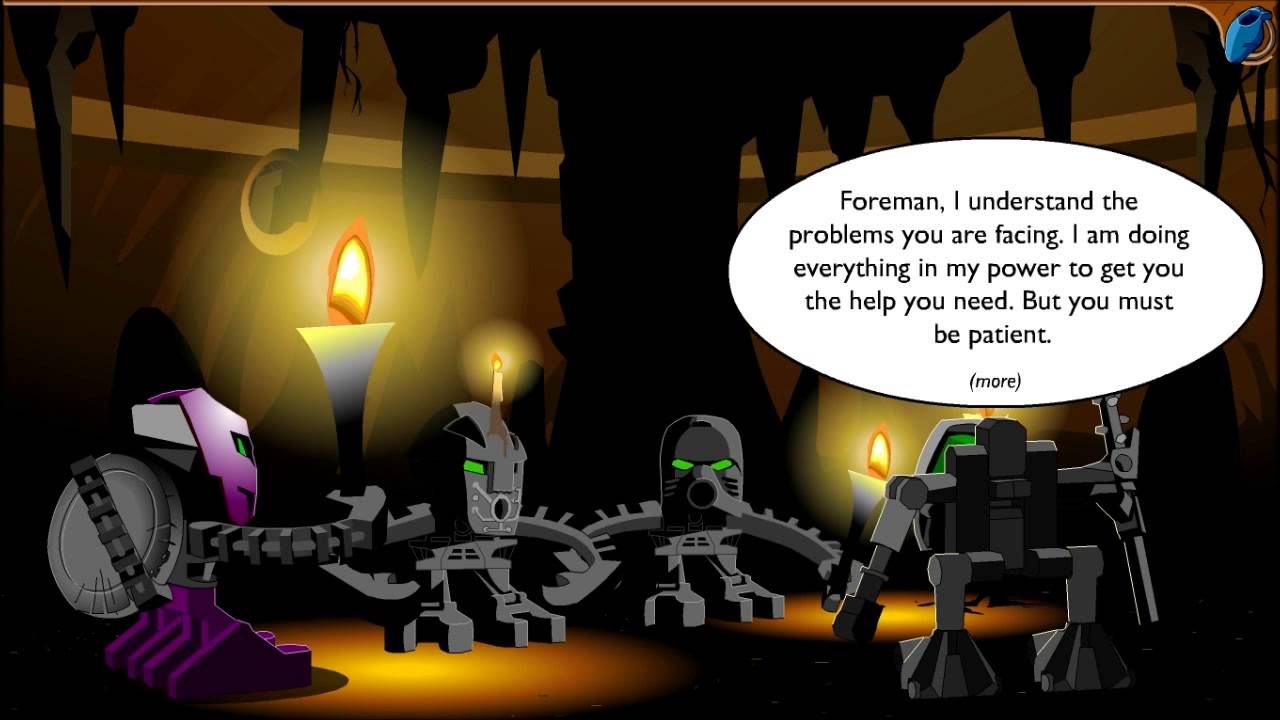