Well, this is awkward. I WAS going to put up something different roughly… Two days ago? Maybe? however, considering I still can’t post it due to a broken system on the site, I managed to make a new M.O.C. while I passed the time. I actually just started him yesterday, and finished him not too long ago from when I started typing this, and much like my lime and yellow M.O.C. (Which sadly still goes unnamed) I gave myself a challenge this time.

I purchased a bundle of parts off Bricklink a while back, the middle of last year to be exact, and a decent amount were specifically to rebuild an Uplink from year one of EXO-Force. I was never able to get the little guy, do I wanted to assemble some parts for one, and I lucked out with a pretty good haul of parts with stickers on them. Or, so I thought. You see, ALL of the stickers were crooked, and I have immense sticker OCD, so I physically could not make myself use them on Uplink, so they sat around unused. I saw them yesterday while tidying up, and my eyes locked on the shoulder pieces/hockey helmets, I always loved those pieces, and so I had the thought “I wonder if I can make a torso out of those.”

Thus was my challenge, to use the Uplink shoulders to make a torso, and not only that, I made it a point to try and add system elements into this build as well. I definitely needed the challenge since I’m not very skilled in building with system, and with those goals this was the result! 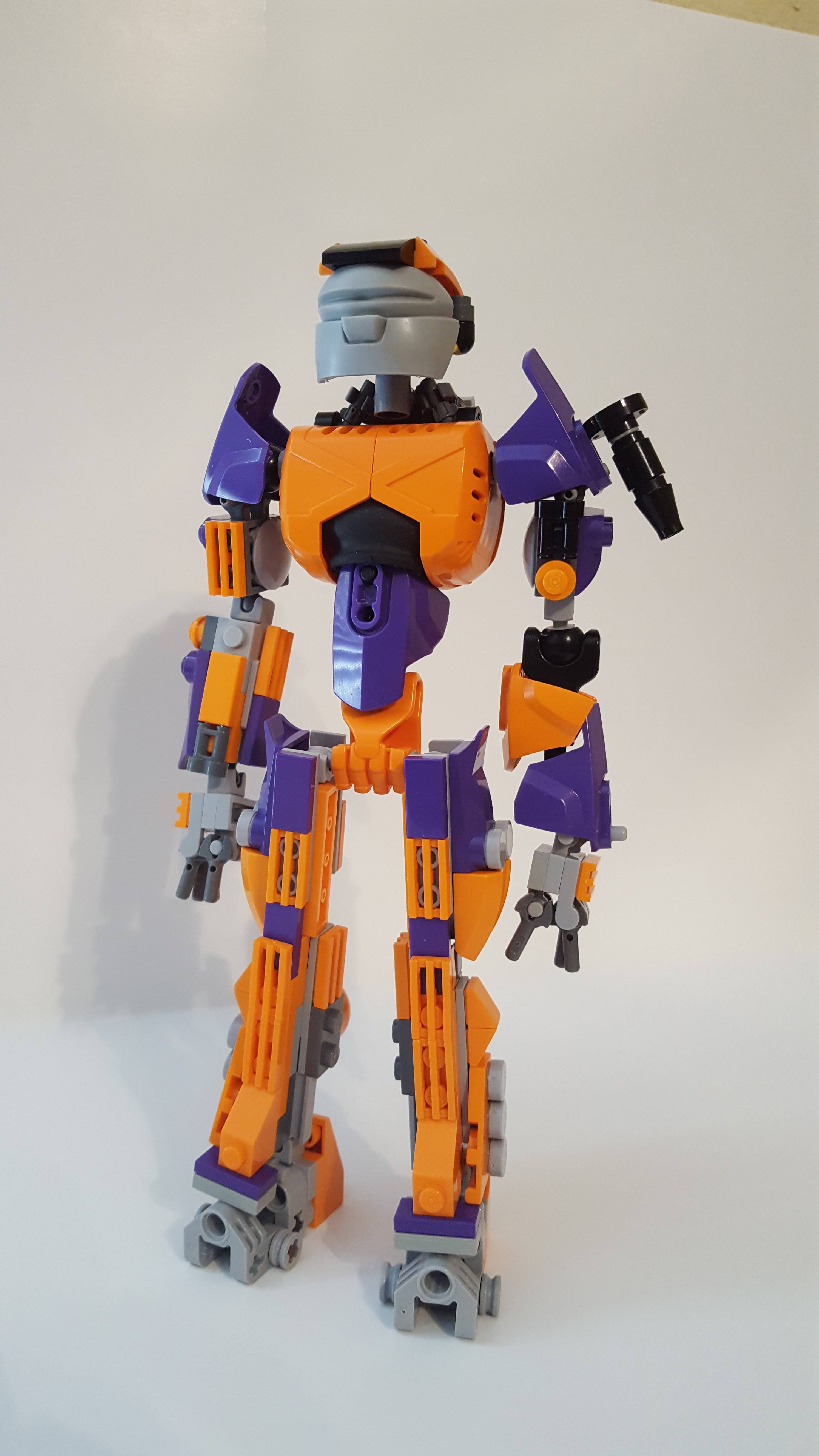 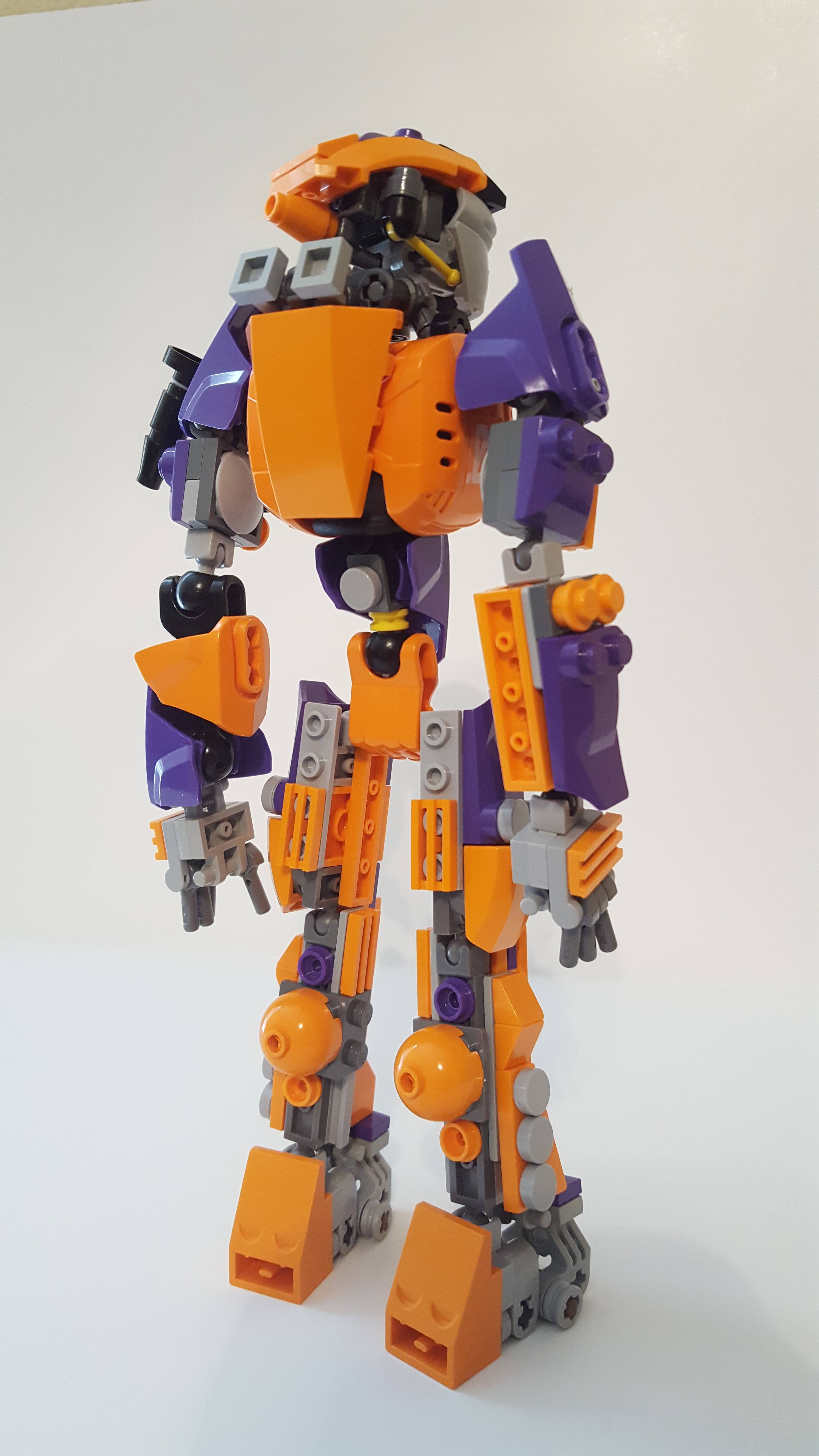 Now, I hate tooting horns here, especially my own, but I honestly am really proud of this guy. This is legitimately my first ever attempt to really combine System with a M.O.C. like this, and I think it turned out darn well. I have my own issues with the limbs, especially those hindering ankle guards that I put in several arrangements only to feel the one I stuck with is the best, albeit most limiting, though otherwise I’m happy.

I actually got to do a lot of things I’d been planning to for a while with this M.O.C., so a lot of pent up ideas finally got released on this single canvas.

While building him a lot of things came to mind, such as “What would this thing do?”, it’s obviously a drone of some kind, so what would its’ purpose be? I sat on this a while whilst building him, I considered a training robot to make use of the re-purposed “AT” sticker from Uplink, I even considered a mail courier (which can be seen by how the head somewhat resembles a bike helmet), only to end on a a low level construction drone.

Its’ main purpose would be sorting, and fetching blueprints for assorted builds, to ensure they never get lost in case reuse is needed. Plus, a machine will remember everything’s place, and quickly fetch any blueprints needed. Hence why I call him “Tag”. It’s a lame name, and I’m open to better suggestions, but that’s the best I could come up with at 4:30 AM. 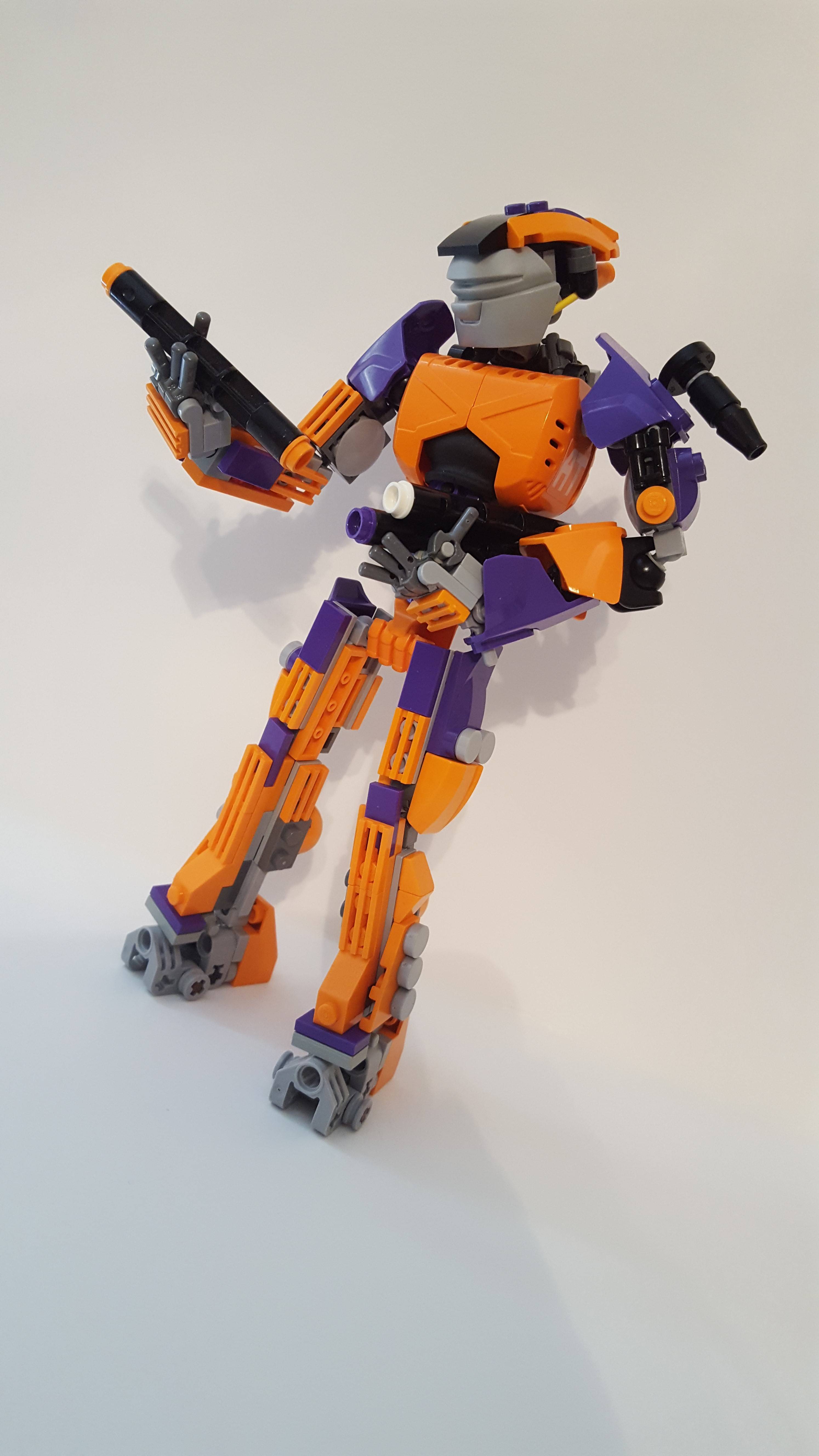 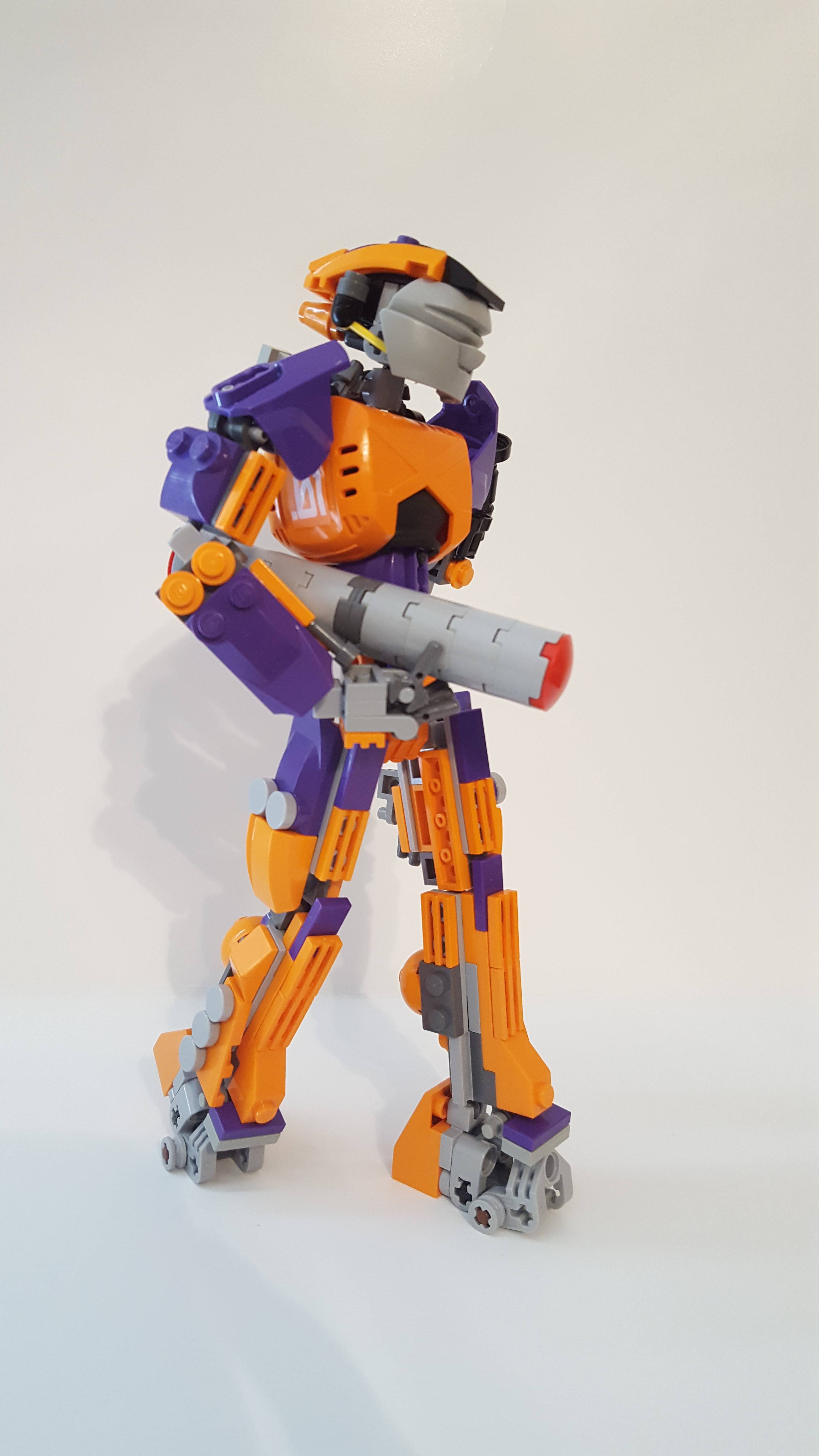 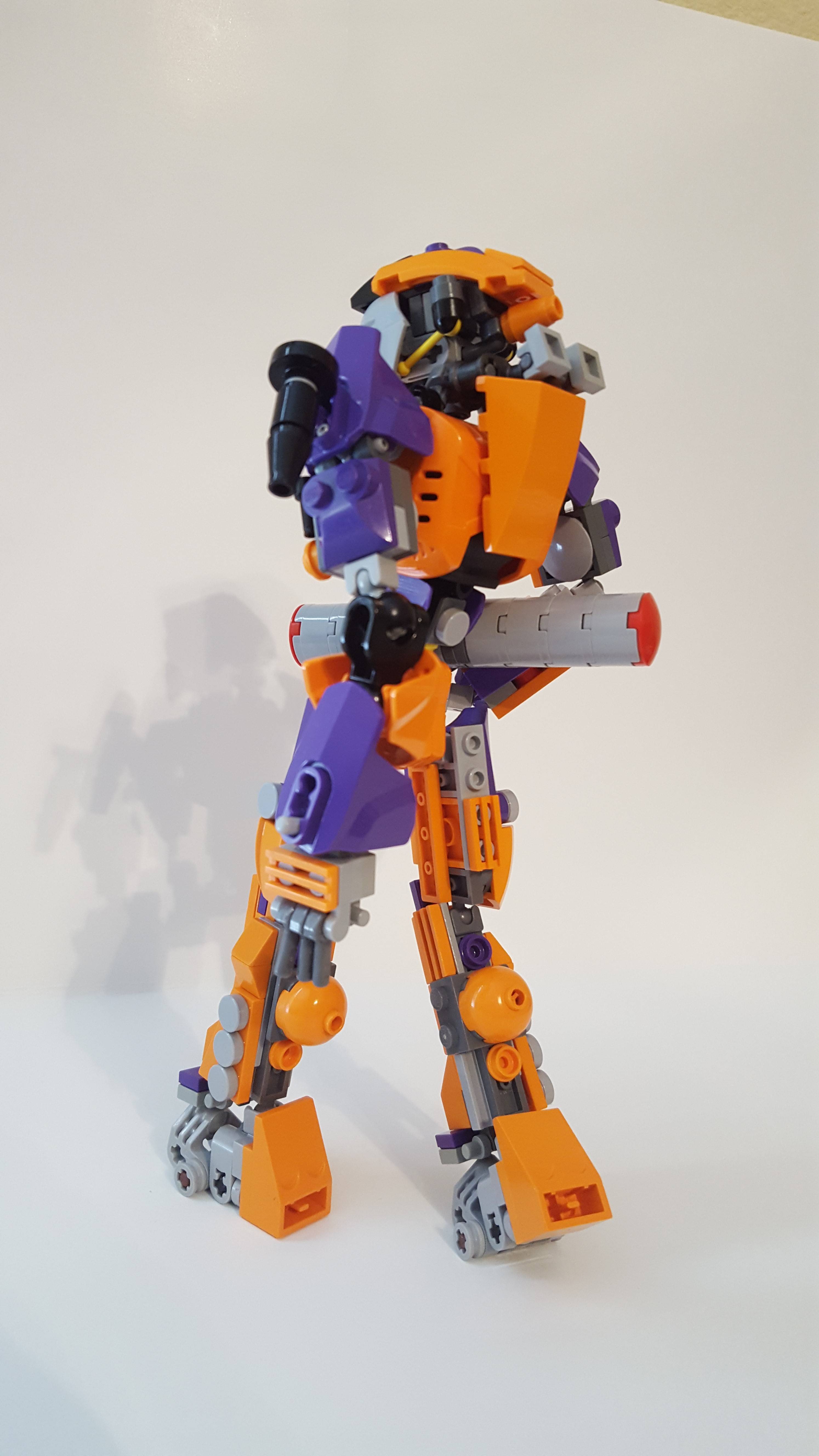 As for the second purpose, that would be welding, to help minimize worker health hazards in that regard. 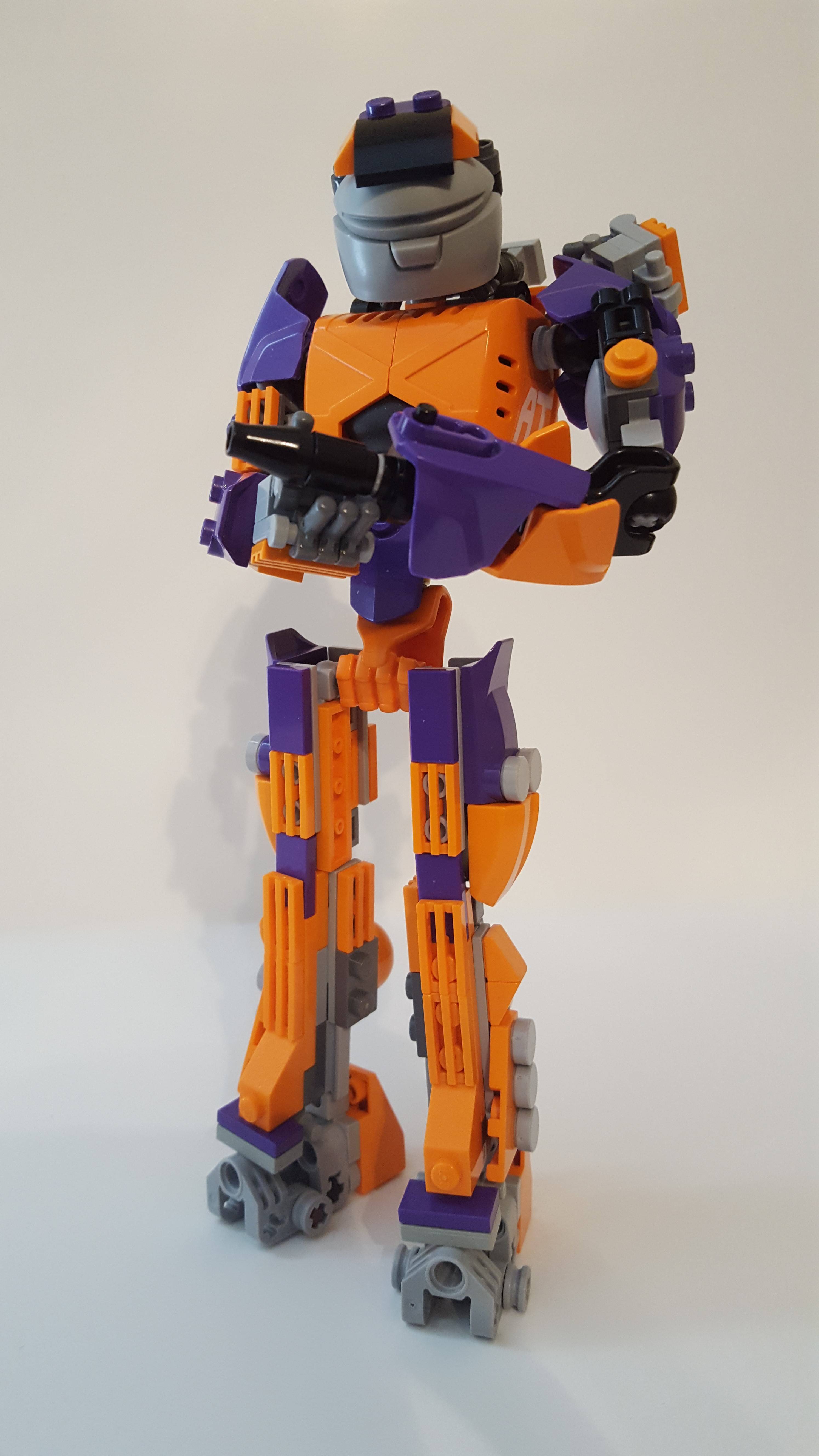 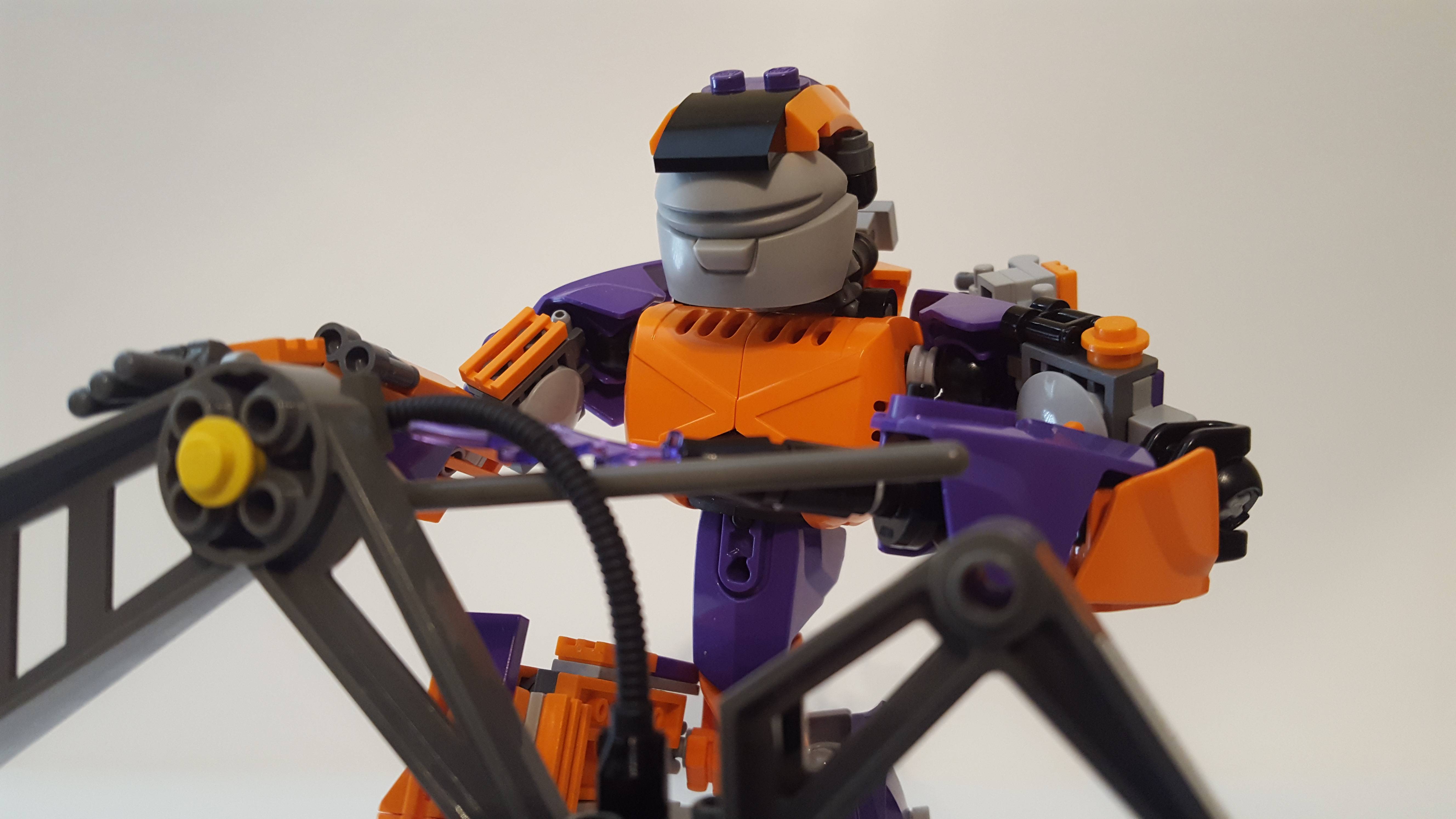 I’ve definitely poured a lot of work into this guy, my system for building for a while has always been a ‘something you can pick up and play with like an action figure’ sort of style, and from my prior creations that has probably been more a hindrance than anything. This time, I used a few connection methods that are abnormal for me, and even some very brittle connections that hold themselves well in posing, yet will fall off when fiddled with too much, or in the wrong way. In short, this thing is by every means an articulated statue. Pose it, and leave it. Playing with this thing is not an option. 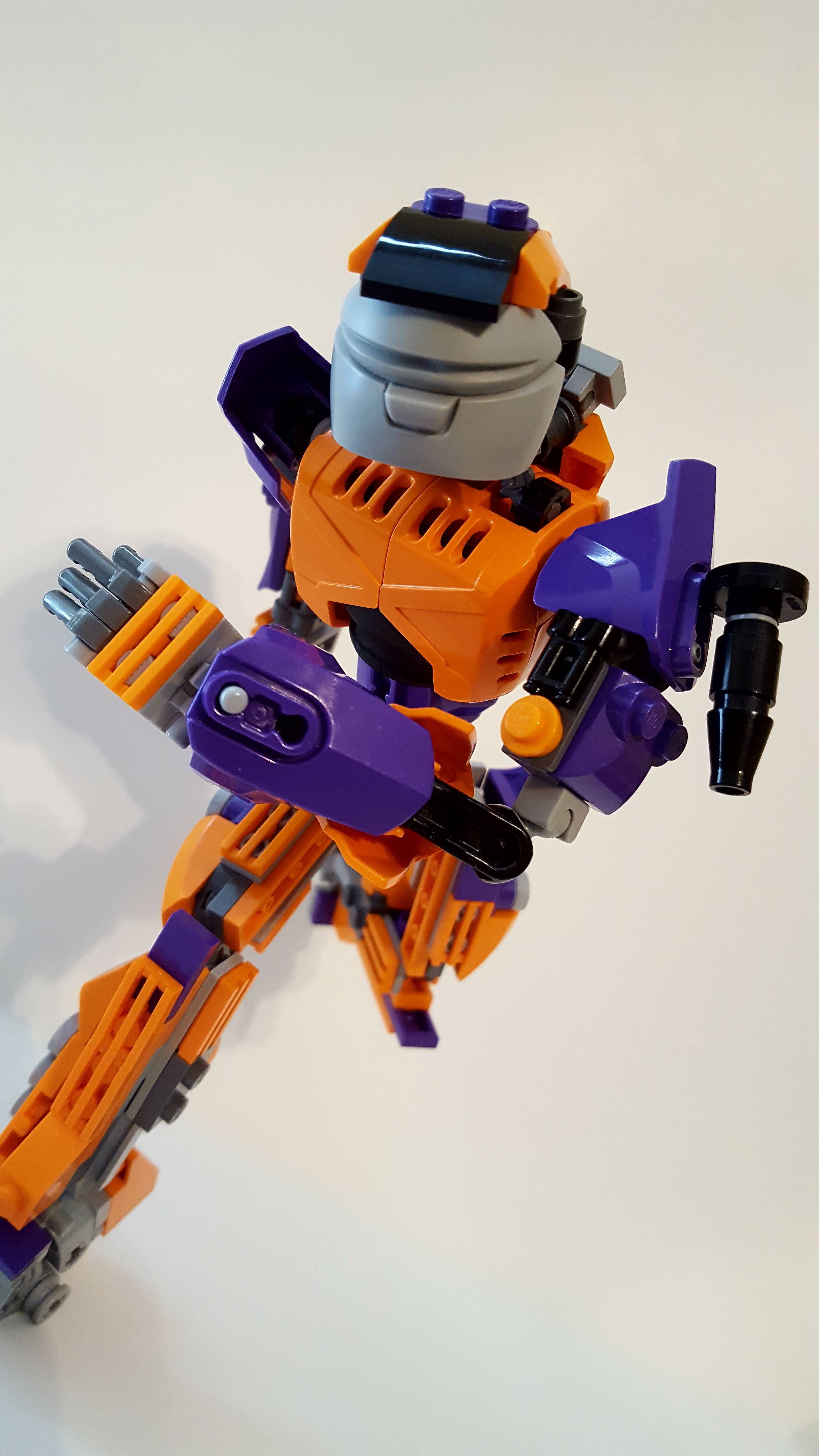 In the end, I’m honestly happier with this guy than I expected I would be, and he came out a lot better than I imagined in my head. Sure, there’s things I wish I did better though couldn’t find a way to at the time, but perhaps that just means I can revisit him some time in the future. For the time being, I’m more interested in hearing what others have to say about this guy, and hear some pointers from those more well educated in the ways of building with System.

Also, I’m sort of new to the white backdrop thing, so give me time to adapt, I figured it was time to move from a back top and off white wall, to just going more towards white. Not to mention my image layout I usually use is kind of defunct right now, since for some reason these images get really low quality when I try putting them together, so it’s a bit of a messy post this time.

That aside, thank you for looking, I hope you enjoyed what you saw, and I’m more than open to some pointers from Pros, and intermediates alike!

I love how streamlined it looks and how everything flows together nicely; even the hf fist as the waist blends in!

Thank you very much! I wanted to have that sort of look while making him, since one of my mainly considered tasks for him was a mail courier. I was fairly happy with the design to where I just kept it looking that way eve after He went from mail courier to construction drone. Although, I feel like I could have made him more streamlined around the legs.

I was honestly worried about the fist when I used it, I’ve seen others do it before so I figured I’d give it a try as well.

What stands out to me most is the color scheme. The orange and purple work brilliantly together and compliment the sleek appearance nicely.

I was hesitant about the colors when I was deciding on a secondary, though I’m glad they came out as nicely as they did. The orange was going to be in it regardless, considering the pieces I wanted to use as the torso, though originally I was considering a light blue, or turquoise.

What compelled me the most for using this scheme was the fact that I curiously looked online for any M.O.C.s that used this scheme, and I couldn’t find a single one. That alone was enough to make me want to give it a go. I’m sure there must be one somewhere, though I sure couldn’t find it.

It’s probably a tad unorthodox, though given the fact that a good portion of this had some inspiration from you, might I ask what you think of it, Ghosty ? If you have any suggestions of what could be done to better it, or such?

might I ask what you think of it, @Ghosty ? If you have any suggestions of what could be done to better it, or such?

Yeah, the arms are sadly due to part limitations, otherwise they would have been symmetrical. To be perfectly honest, the Torso is what I spend the most time on, working on making those two helmet pieces into a torso, then figuring how I’d attach the head, while the legs were my focus of trying to incorporate system into the M.O.C. more prominently.

I rarely touch system, so I wanted to get a sort of balance practice on this guy, though my limitation in parts of certain color, or in any color that didn’t stick out terribly were low. The legs were definitely practice above all, while the arms were basically the portion of “Use what’s left.” I’m at least happy with the legs to an extent, and see myself finding a way to improve them in the future, though if I do come back to this M.O.C. in the future, the arms may just be entirely reworked.

This was definitely new for me, and I was eager for advice and opinions above all else, which I’m glad I managed to get some. Thanks for the bit of feedback, it’s very much appreciated, and I’ll definitely put more work into him after some experimental LDD fiddling with the legs.

Thank you very much, I’m definitely happy with the end result as well, though I admit I definitely need to work on the limbs whenever I come back to this guy.