Cusp of a New Era: Stories of a Changing Time(Signup and Discussion)

The CIA thing was:

And both, the answer is both.

My comment was mainly a joke. I was around in Conduit, I do know what happened. I just got really confused of what was happening and slowly dropped out.

In all seriousness the main reason for my pirate crew was for transport. and if anyone wanted to join it…pirate adventures!

Kinda like I made the Dark Mist to explain how Makuta was able to get Symphony’s body and experiment on it…now they’re being hyped up…yay!

Name: Aina Dreharion
Gender: Female
**Nationality:**Gathenian
Appearance: A blond haired tall woman, who looks to be in her late thirties. She dresses plainly, and works a basket-weaving business, selling her products to the local stores, so they can store their wares.
Weapons/Materials: basket weaving tools and materials, as well as a small store/house, that Aina lives in, it comprises of two bedrooms, and a kitchen/living room.
Bio: Aina is the mother of Moenir Dreharion. She lived in Gathens for as long as she remembered, and once fell in love with a sailor. That sailor left her, for the thrill of the seas, and rarely visits, though hasn’t visited since Moenir’s birth. She’s kept a job going since then and has been earning a simple living.

“Me, my name is Mademoiselle Noir, and as can be seen, I neither smile, nor laugh, nor live.”

She is cold, uncaring. She has ruthless efficiency and a cold fury, carrying out the will of the Grand Commander however she sees fit. More often than not, she seems emotionless, almost lifeless, yet she almost always knows what she’s doing and how to do it effectively.

She is the Grand Commander’s highest ranking military officer other than himself, above even his generals, and who usually stays within Reamworth with him to attend to diplomatic matters. However, during wars, the Mademoiselle is tasked with going to key points the army has captured in order to make sure all is going as it should, and that is what she is doing here, in Kenasa, making sure that the city is firmly within their own grasp.

NOTE:
This Topic is now also going to be the OOC Discussion topic for this RP, so feel free to use it as such.

To commemorate the moment… well, I think I need to post. 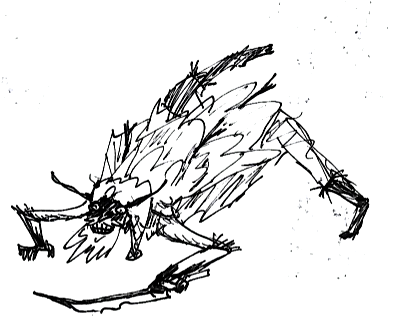 Bio/Personality: Nacha is a deranged hermit living the Great forest outside of, Nikidia, he believes that he is an the avatar of an ancient and terrible god (which is fallacy); with the recent conflict between Marsada and Nikidia he finds the lumber of his “Domain” is being seized for arms production as well as ships, needless to say this is greatly displeasing to him and he consequently seeks out those responsible for their “transgressions”. Despite his fanatical territorialism and god complex he is strangely affable and seems protective and reverent of the individuals who respect him.

Hey @Runa would it be possible for me to make a witch hunter character?

Can’t see why not.

Go ahead and sign them up, we’ll see where it goes from there, I guess.

Appearance(picture soon): A thin tall man who’s face shows clear signs of age, wearing a classic inquisitors hat and a large dark coat with a tunic, underneath the tunic is a mail hauberk, his outfit features numerous belts and pockets.

Bio/personality: Bertram is one of those people who you just want to avoid because you know that he’ll judge you. Now he was going to grow up to be a pastor for his local church however things went awry when he found out that some of the clergymen whom he’d been working with had fallen ill, that was a test of faith for him, however he later found out that these sick clergymen were not praying to be cured but rather speaking with a “wise woman” and you know where that’s going, he reported it to the guards who didn’t really care much, so he told the witch hunters. Four people burned to death that night. Heresy they said. Bertram joined the witch hunters not long after, earning the nickname “Icicle” from his comrades for both his thin stick-like body and his cold temperament. Not being the type of person who seems to take any satisfaction in his work. However like any witch hunter he’s quite superstitious and can jump to conclusions calling out things he doesn’t understand as “witchcraft”.

Edit: I can’t wait to see how he reacts to Mademoiselle Noir and the rumors surrounding her.

Oh, just rumors all around Nikidia, especially in the army, about her.

They say she took down an entire Marsadan corp with just her whip and left without a scratch.

They say a traitor once tried to light her hair aflame, and she killed him using just her burning hair, to make an example.

And, most prolific of them all(yet also the least believable), is that she is in fact not human.

“I neither smile, nor laugh, nor live.”
They say she’s undead, vampiric. They say the Grand Commandant summoned this undead spirit to lead his armies without fear and without emotion.

And many more. But, they’re just rumors…probably.

Well, I’ll keep her in mind

Name: Taeland Berl, “The Bear”
Gender: Male
Nationality: Gathenian, he is one of the Big Names in Gathens.
Appearance: Taeland stands about ahead taller than most and is a larger person. His blond hair stands out as a brilliant golden color and he dresses with the emblem of a bear, keeping his clothes mostly simple.
Weapons: Taeland carries a sword at his side and has a hunting musket, which he keeps in his office.
Bio: Taeland is one of the Big Names of Gathens, so despite his simple appearance he is one of the richest in the country and he does have a say of what is allowed there and what isn’t.

Name: Jana Amethyst, “The Lion”
Gender: Female
Nationality: Gathenian, she is one of the Big Names in Gathens
Appearance: Jana is a tall and proud woman with striking red hair. Her very being screams royalty and she wears the hide of a lion as her cloak. Her clothes are of intricate design and foreign fashion, filled with many beautiful patterns.
Weapons: Jana has six pistols strapped to her body, and a bull whip at her side.
Bio: Jana is one of the Big Names of Gathens. She lives in Marketshire and is known for her monopoly of gathenian delicacy, of which its recipe was kept under lock and key.

Name: Nevis Garnet, “The Snake”
Gender: Male
Nationality: Gathenian, he is on of the Big Names
Appearance: Nevis is a sleek and gaunt man, standing two heads shorter than Taeland and three heads shorter than Jana. He is the craftiest of all the Big Names and is known for rather shady deals. He has black hair and usually dresses in dark green clothed.
Weapons: Nevis carries a rapier and a pistol.
Bio: Like the other Big Names, Nevis is one of the three leaders of Gathens. He lives in Hurian and is not shy to make any deal that profits himself.

Cusp of a New Era: Stories of a Changing Time(RP Topic)

Louisa might hear the crier that Hans had heard earlier, repeating the same message.

What was that message, again?