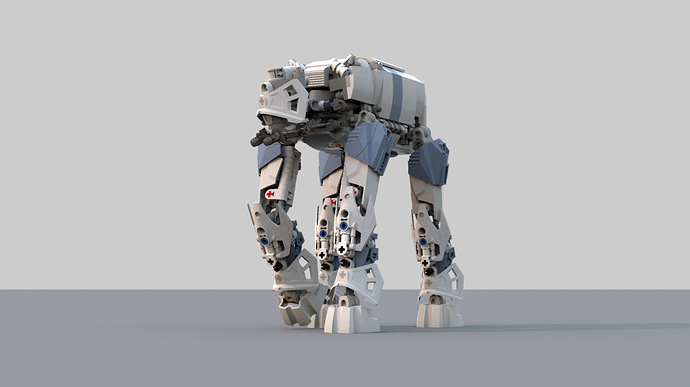 ##GENERAL INFORMATION:
First and foremost, hello again everyone! I have returned after a long absence. Some personal events that I won’t elaborate on made me leave, but I have returned. My first post here on my return will not be a BIONICLE MOC, but a Star Wars one instead. This MOC was created because I thought the legs of my personal self-MOC (which I will post sometime soon) looked like they would work as walker legs, and so I designed the walker around them.
I have had a non-canon Star Wars company called “D.I./GECO” (Defense Industries / Galactic Engineering COmpany) that I use for branding my custom Star Wars creations under. This company primarily designs and produces war machines for the New Republic of the old Expanded Universe. Here is a general description of the walker itself:

This the DI/GECO ATW-1024-10 All Terrain Walker. It is larger and more powerful than an Imperial All Terrain Armored Transport (AT-AT). It is designed to generally improve and outspec the AT-AT. The ATW-1024-10 also addresses an issue the AT-AT has with tow cables, meaning that the ATW-1024-10 should be much more resistant to tripping up with tow cables than its Imperial counterpart is. However, it is not immune to that tactic by any means, as it is an issue any walker is likely going to face just due to the fact that a walker uses legs to get around. There are three variants of the ATW-1024-10, those being the 10 Base model, the 10S Snow/Cold Environment model, and the 10H High Temperature Environment model, each with different specs due to the adaptations required for each variant. As such, I will be listing only the specs of the Base model, the 1024-10.

ARMAMENT:
-2 Chin mounted Turbolasers
-2 Chin mounted weapon hardpoints
-1 Upper back weapon hardpoint (Hidden under durasteel armor plates when not in use) I might post a picture showcasing this at a later point in time.
Note: Chin is capable of swiveling downwards to allow for a greater amount of weapons fire coverage than would otherwise be possible.

DEFENSES:
-Heavy Durasteel Armor Plating
-2 Heavy Duty Shield Projectors mounted on the front of the body of the walker
–Requires walker to halt all movement in order for shields to fully and completely activate

TROOPS & CREW:
Troop Capacity (When no weaponry is mounted on the walker’s back):
-Recommended: 50
-Maximum: 54

Crew: 2 Drivers in the walker’s head

POWER GENERATION: DI/GECO ATW-1024-10 Fusion Power Generator: Consists of three smaller fusion generators. Can operate on only two of the smaller generators if need be. 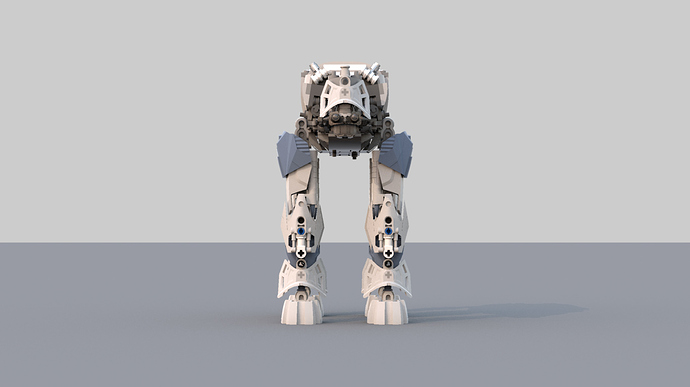 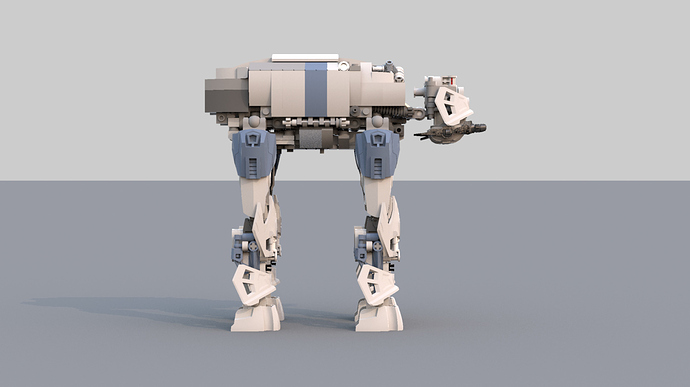 Left view with chin aimed down: 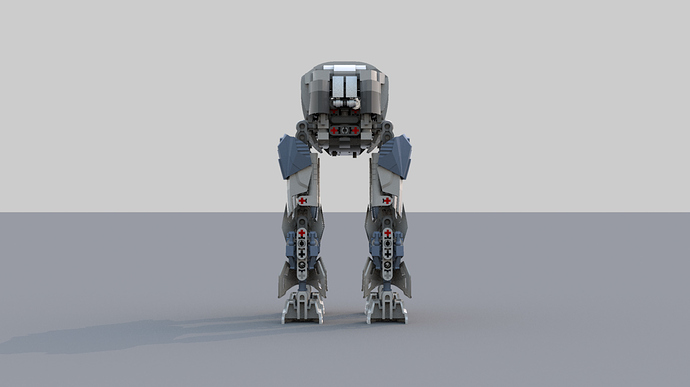 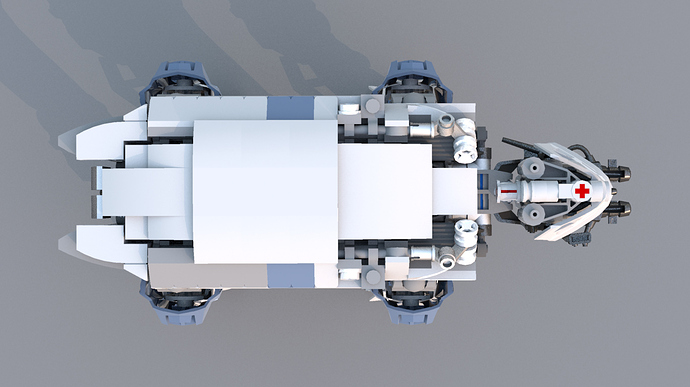 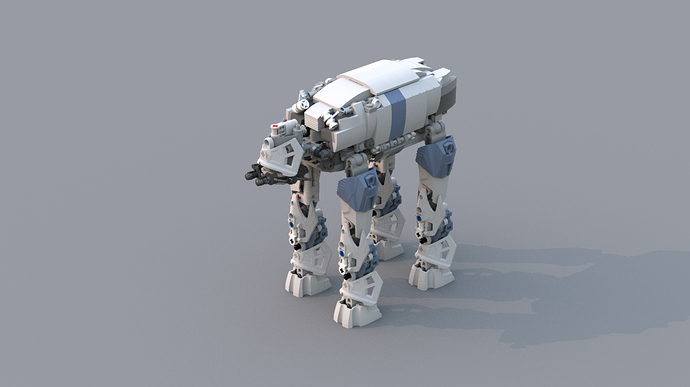 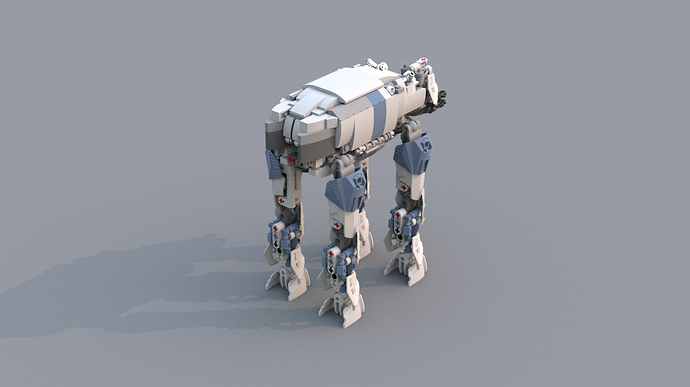 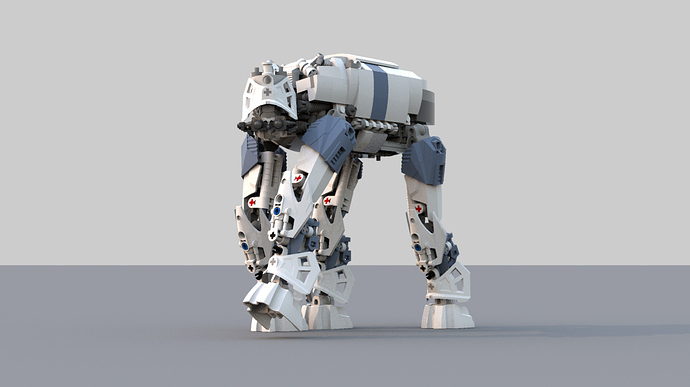 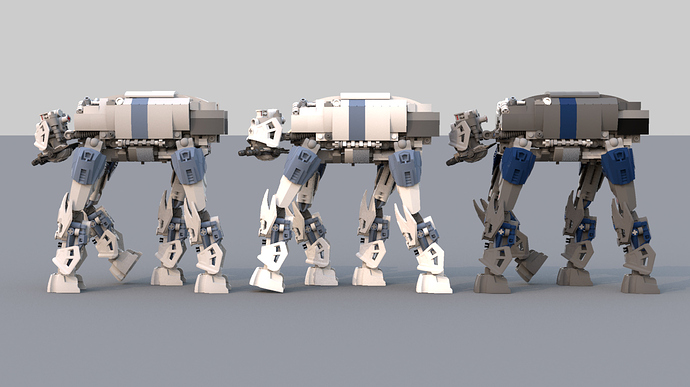 DG-ATW-1024-10 walkers coming out of a construction yard: 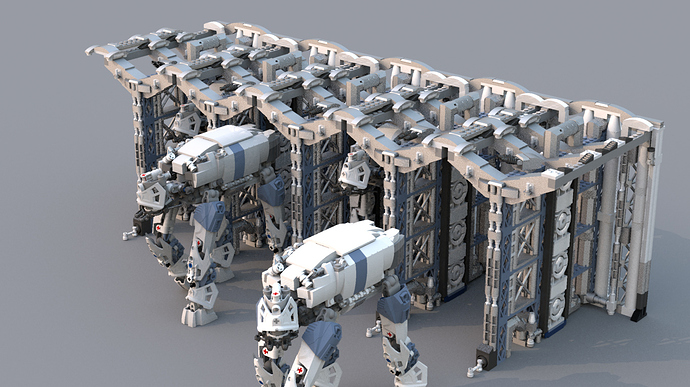 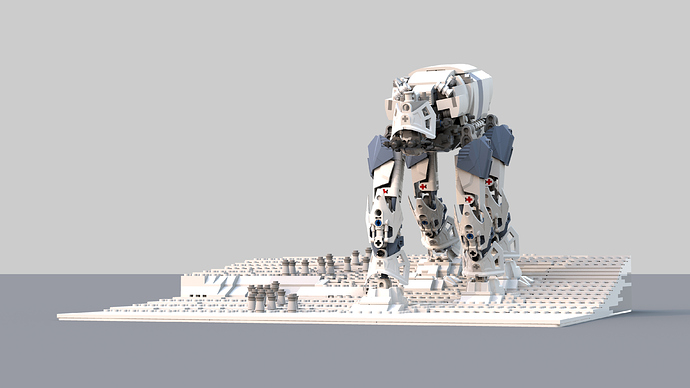 ATW-1024-10S_Walking Downhill_With Hill_HQ.jpg3840×2160 768 KB
This image was re-rendered on my new computer specifically for this post. The rest of these images were rendered on my older computer and is the reason why they are a smaller resolution than this one. All of my new posts should have pictures that are 3840 by 2160.

Rendering engine used is BlueRender. You can find it here.
Any and all constructive criticism/feedback is welcome.

I like the amount of lore and thought behind this, adds a lot of depth.

Very cool design all around, dont really see sand blue a lot but it compliments the futuristic aesthetics very well.

as it is an issue any walker is likely going to face just due to the fact that a walker uses legs to get around. 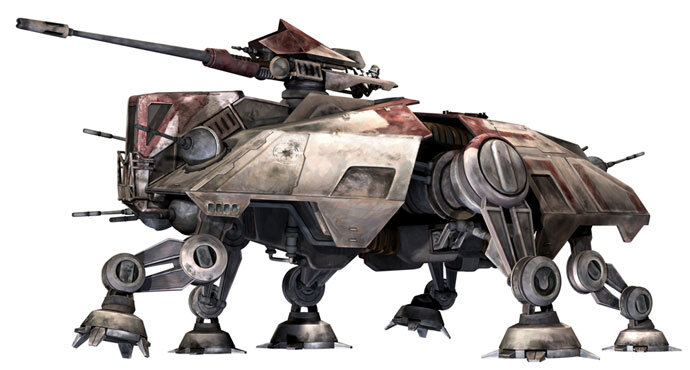 Speaking of the AT-TE, I am working on a custom AT-TE style walker right now. And yeah, I concede that the AT-TE is unlikely to be tripped by tow cables, but that description paragraph is over a year old and I wasn’t thinking about the AT-TE at the time. I literally copied and pasted it into here. I still concede your point, though.

This scene is incomplete, but I thought I’d show it off anyway, as I have been working on this scene off and on for over a year now and as such kind of doubt it will be finished anytime soon. 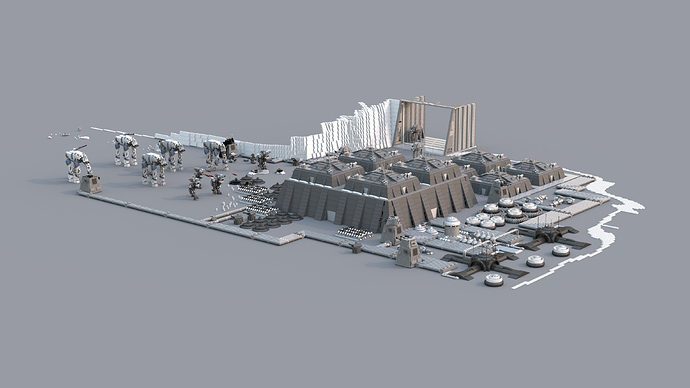 ATW-B256-4_Imperial Base_4.1_HD.jpg3840×2160 1.04 MB
It shows several DG-ATW-1024-10S walkers assaulting an Imperial research outpost on a snowy world with some DG-ATW-B256-4 walkers (which will get their own topic soon) as support vehicles. A couple of the ATW-1024 walkers have mass driver cannons of an older design on the weapon hardpoint located on the walker’s top. I have much better looking mass driver cannons that I will replace these ones with next time I work on this scene. There are to scale AT-ATs and AT-STs in the scene as well, but they are hard to see because most of them are behind the buildings. There are also to scale TIE Fighters in the scene, but because the hanger is so far from completion, the TIE Fighter models are just sitting on the ground behind the hanger walls and are out of sight as a result. The large turbolaser towers are supposed to be to scale XX-9 heavy turbolaser towers. In total, the model consists of 22,066 pieces at the moment. I have plans to add the currently in development ATW-2048 6-legged walker into this scene once that walker is finished, among other things. The reason the ground is grey instead of white is because while this is under construction, I want all of the LEGO models to stick out against the ground so others can see them better.
4 Likes
DI/GECO ATW-B256-4 Bipedal All Terrain Walker