End of the Gilded Age: A Superhero RP (Sign-Up and Discussion Topic) 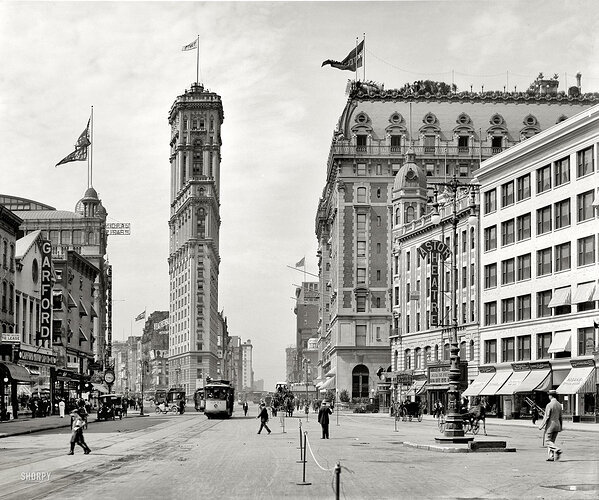 The Year is 1908. President Theodore Roosevelt was in the last year of his term, and the American industrial future is uncertain. Strikes had occurred across the country, anarchism is growing rapidly, and fears of the dead talking have frightened Americans across the country. Women are trying to get their voice heard in the vote. Great skyscrapers have begun to get built, and automobiles have taken everyone by surprise. Scientific achievement is going faster than anyone expected, as atomic structure and biology is making new discoveries every year. The pinnacle of that scientific achievement has been the World’s Fair, attracting all to see the “Land of the Free” finally coming toe-to-toe with the powers of Europe.

This the end of the Gilded Age, the peak of American exceptionalism. It is also a time of great injustice. The streets are untrustworthy in the greatest of American cities as crime becomes more problematic. Corruption booms as the wealthy see their businesses attacked by American law, and politicians overlook their constitutional obligations.

You are the men and women who answer this exceptional call to deal justice, being extraordinary yourselves!

What this RP is about

This is a fictional version of Industrial America. The title is misleading… You guys are actually in the beginnings of the Progressive Era, but the Gilded Age was definitely at an end. You guys are playing superheroes in an imaginary 1908 version of New York. There will be historical figures involved, too!

Expect some of the NPCs to be occasionally cruel or derogatory. I will not throw actual historical insults or slurs, because we don’t need that. There will be historical politics, however, so don’t be alarmed when subjects like socialism, communism, suffrage, anarchism, etc. I will try to handle this with as much respect as I can. But you don’t need to worry too much, I’m the one staunch for historical accuracy.

This may come off as frightening to you, since this is a historic RP. Don’t be too scared. Don’t be afraid to play stereotypes of the day, like manly men, delicate Victorian women, magicians, spiritualists, etc. Just think of working class and American background. Maybe even ask grandparents or relatives about your ancestors of this day, and incorporate them here. And if you’re not from America? Excellent. The Progressive Era saw plenty of immigrants, so it’s completely reasonable to play someone from another country.

Think of an origin story, as well, for your powers. Don’t be afraid to use old fashioned superhero tropes, like radiation, magic, or even steam-punk elements. You could even play someone like a super detective, a cowboy, or a magician. You can make up atomic elements, science, and businesses! Fictionalize it.

I will ask all of you to stick to one superpower for the sake of simplicity for this RP. I don’t want anyone being more powerful than another.

If you are having trouble creating a character, don’t be afraid to ask me for help, or even historical input. My job as the GM is to assist your adventure, so come and ask me!

We all good? Cool. Here’s a character sheet:
-Name:
-Alias: (If you have one)
-Age:
-Sex:
-Home:
-Physical Features:
-Appearance:
-Accessories:
-Personality:
-Equipment and Gadgets:
-Power and/or abilities:
-Origin Story:

SEPTEMBER 16TH, NEW YORK COUNTRYSIDE. 1908. It had been a long day on the train. The lot of you, coming from the city of Richmond, had bought tickets to New York City. Why had you gone? Was it to look for work? A new way of living? Or perhaps it was just a pit stop upon a longer journey. But look outside for a moment. New York is a little colder than you are used to, but you are astonished by some of the greener fields dotting it all. This thought is distracted by the stuffiness of the train. Far too warm! A man in the same cab as you had fallen asleep, and he was snoring loudly. And the porter… Always too late with the food. What kind of dining was in this train anyways? Horrible. Whatever your complaints or thoughts, the trip was coming to a close. In about an hour’s time, you would …

I’ll have to think a bit about who or what I want to play.

Alignment. Please try to stick to heroes and anti-heroes.

Wait, is this a text-based rp, or is this an on-site DnD rpg?

Text-based. I just ask for these things to stop conflict from brewing between players, which can lead to hostile fighting OOC. It’s always messy.

-Name: Richard Whitaker
-Alias: none
-Age: 35 or so
-Sex: Male
-Home: Charlston, South Carolina (A place I have experience with)
-Physical Features: particularly tall and lanky. Well-dressed.
-Appearance: A white male, about 6" 3’, woth a large reddish-brown beard to match, haor of similar color, but more brown. Particularly well dressed in gentleman’s finery.
-Accessories: a cane, and a pack of fine cuban cigars.
-Personality: as a member of the southern gentry, he appreciates the finer things, but isn’t afraid of hard-work, and to get his hands dirty. Generous, and well-liked back at home. A habitual smoker, he likes nothing better at the end of the day than to kick his feet up by the fire, and have a good smoke.
-Equipment and Gadgets: underneath his jacket, he has a sling holster, with a Luger P.08 American Eagle. 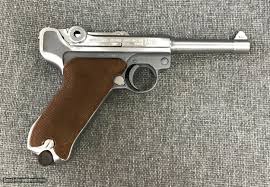 He also always packs a a Winchester model 1866 Carbine rifle, though he usually doesn’t carry it on his person. 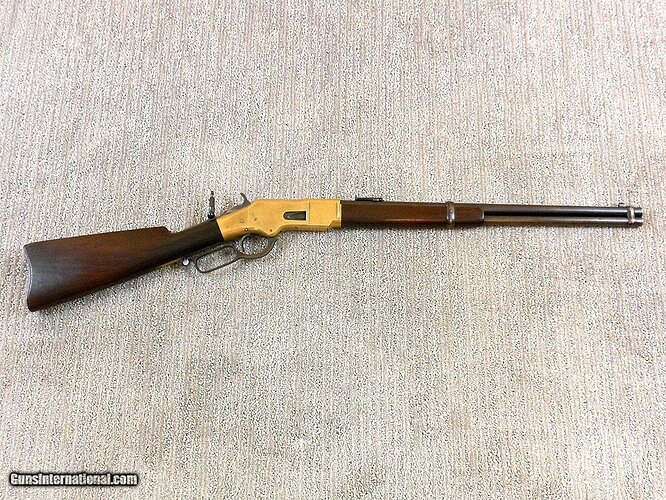 Winchester-Model-1866-Carbine-In-Factory-Original-Condition_101258798_51511_A0F88702AFEE9698.jpeg2048×1536 894 KB
He also carries a small knife.
-Power and/or abilities: He has an incredible mind for buisness, and has great charisma. His power is simple, perfect accuracy. He’s been banned from all local shooting events due to this. It takes alot to cause him to miss, such as something else getting in the way, or someone distracting him at the last second.
-Origin Story: Richard Whitaker’s story is a common one in post-civil war southern gentry. After the war, his family was stripped of their livelihood, their fortune, and thier home, all that was left was his name. His father managed to stabilize then, but they were a shadow of what they were before the war. When Tichard was 14 or so, he resolved to bring honor back to his family name. He put his capacity for buisness into investing, and trading in the coastal city of Charleston, one of the biggest ports on the east coast. By age 28, he had not only regained his family’s lost wealth, but increased it by 37%. After years of growing his wealth, he was called to New York on buisness. What he will do when he arrives there, no one can say.
1 Like
Chronicler January 21, 2020, 1:46am #6

He’s been banned from all local shooting events due to this.

Oh this is going to be entertaining.

Yep. It’ll certainly give him an edge, as automatic weapons weren’t invented until about the turn of the century, and were the sole domain of the military until the 20’s. So being a perfect shot with a repeating rifle gives a distinct edge.

I mean, SMG’s weren’t produced for the military until just after WW1, and LMG’s existed as far back as 1902, but no one used them.

-Name: Manco
-Alias: “The Gunslinger”
-Age: 53
-Sex: Male
-Home: he has no place to call home, he’s a lonely soul wandering the land, searching for work, and dispensing his own brand of justice.
-Physical Features: The Gunslinger is tall and hefty, he has prominent cheekbones, a patchy beard,
-Appearance: tall and heavily built
-Accessories: bandolier
-Personality:
-Equipment and Gadgets: His right arm has been replaced by a large civil war era machine gun. He might not be as accurate as he was in his youth, but he’s now got a nice spread
-Power and/or abilities: Forget handguns, this man’s hand is a gun!
-Origin Story: formerly a hotshot gunslinger, Manco’s quick draw began to slow with his age. Searching for a way to regain his lost edge, he’s augmented himself to compensate for his ailing health.

Do you mean a Gatling gun?

Probably, whatever shows up when I google, “Civil War Machine Gun”

Mostly because Machine guns weren’t invented until the turn of the century. 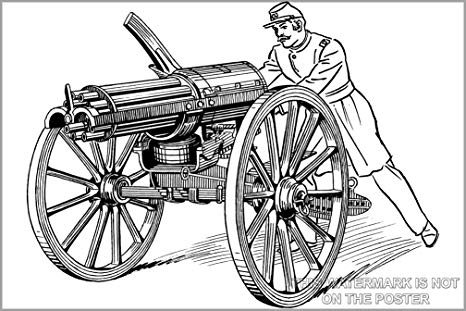 So basically, he has this attached to his arm, crank powered?

You don’t think that might be a bit hard to lug around, especially in place of a hand? especially when he has to use his other hand to turn the crank AND pull the trigger, negating any advantage it would give? It’s a two-man weapon.

Has he got a third hand?

Why not have the arm that’s the gun act as the trigger and turn the crank with his other hand.

turn the crank with his other hand.

How would he pull the trigger? Hook it up to a tendon I guess?

Does it really matter?

A little. I mean, this is the turn of the century we’re talking about. Just trying to figure out how it would work. You know me.

The gatling gun was invented in 1883, so it’s possible to have one.