Name: Raksha
Alias: None
Species: Unknown, same as Thornrax
Powers/Abilities: a weaker set identical to Thornrax’s. In addition, she is immune to any sort of telepathic attacks, and she is able to create illusions of her adversary’s biggest fear. She also still has the ability to suck the life essence out of any being she touches.
Weapons: Scythe.
Crime: She was never saw in any known universe so far. As such she can’t be accused of any crime.
Appearance: She wears scarlet clothes with gunmetal accents. She has a cape with a hoodie that completely covers her eyes, having a dark void instead of face, just like Thornrax. Her four energy spheres-like eyes are red. She has very long gloves and boots, and a gunmetal belt made out of iron.
Personality/Bio: Unknown. She is Thornrax’s sister.

Name: Dez
Alias: None
Species: Same as Thornrax and Raksha
Powers/Abilities: Same as Thornrax, in adition to a much weaker life-sucking ability and a much more powerful strength (think at the Hulk).
Weapons: Two hammer linked together by a chain at the end of their handles.
Crime: Same as Raksha
Appearance: Imagine Cull Obsidian, but with a huge, black armour on him, and with a helmet with a small furnace door as a faceplate. No eyes are visible through the bars of the door.
Personality/Bio: Unknown. He seems to be Raksha’s angry henchman.

making this because bleh

Weapons:
-Dividing rapier (can be used to split apart things that fuse together)
-Seeking flail (a flail with a seemingly infinite chain that can seek out opponents based on a factor that can be set)
-nausea blade (an arming sword that partially evicts somethings soul from it’s body causing extreme discomfort and nausea)
-Incorporeal axe (it can cut. ghosts gases and other such things) 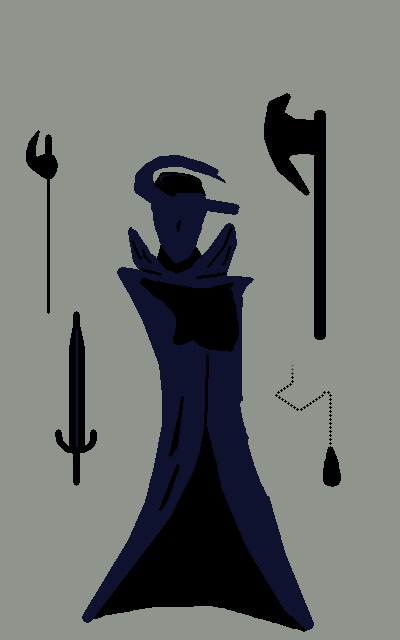 Can you still sign up for this Rp? If so I would like to sign up Tarkur as a character and if it’s okay with you he wouldn’t be a guard nor prisoner but an outsider. Can post his sign up sheet once I knew whether I can join or not.

Name: Haaki Shomfka
Alias: Second Emperor of the United empires
Species: Immortal
Powers/abilities: Can live for a very long time, second in command of the largest empire in the universe
Weapons: An entire empire, a rideable hound and an entire arsenal of weapons
Crimes: Attempted to take over the universe, mass murder, attack on innocent planets, sexual assault
Appearance: 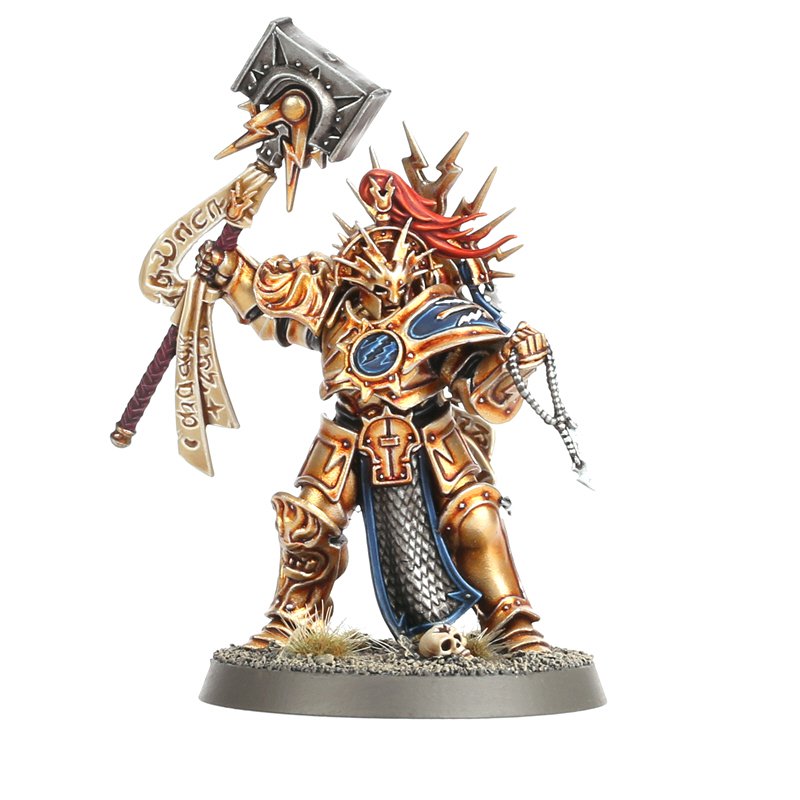 image.jpeg800×800 74.3 KB
Personality/Bio
Haaki made many attempts to take over the galaxy, when Earth was invaded by the Xir’algath, he at first wanted to take earth for himself but instead he made a deal with Taghiat Quasai to sell out Zalas Quobb and unite 40 empires across the multiverse, how Taghiat betrayed Haaki and locked him up once the empires were united, however when Taghiat was defeated, Haaki led the remaining empires for a while, conquering planet, enslaving children, taking the women and killing the men, unfortunately, he fought Leonardo which didn’t go well for the warrior
@Mctoran
Mctoran June 30, 2019, 10:49am #70

Name: Tarkur
Title: Flames Guardian(Former), Reignited Spark(current), Planeswalker(current)
Species: Weird
Powers/Abillities:
Except for being able to use the elements his body is made up of so is Tarkur able to use blue and red magic. Tarkur have 9 spells he can use but he can only use them 4 times each a day. The spells also requires mana to cast which is a resours he generates through a planes land.
Tarkur’s spells are the following:
Instant’s and sorceries(these are you typical spells that doesn’t last more than one turn)

Weapons: Tarkur has no weapons.

Apperance: Tarkur is a fire and lightning elemental who looked like this once: 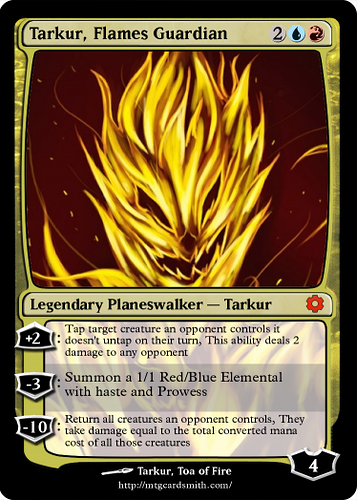 Tarkur is what is called a weird a mixture of two opposing elements created in the Izzet League, thou Tarkur is a weird created from two similar Elements. Due to an attempt at sacrificing himself two safe others from the Gamemasters terror in Arena Battle! He have since had too replace pieces of him with metal to keep his body intact.

Personality: Tarkur is a quirky hothead, that has a curiosity and entusiasm for science, he is a noble person who sticks to the rules but doesn’t mind breaking them if science is evolved.

Bio: Tarkur is from the plane of Ravnica which is a grandiose city stretching the entire plane. The city is devided in ten guilds that does different things to keep the balance in the city. Tarkur was born and raised in the Izzit guild whom focuses on crazy inventions and wild experiments among which is creating elementals of two opposite elements. Tarkur on the other hand was an experiment gone wrong fusing two similar elements into the same elemental. He has the element of lightning and fire flowing through him. Because of abuse and being forced to work as a test dummy he eventually broke free from his captivity but in his rage killed his creator, who was the one Tarkur hold closest to his heart. The experience was so traumatic the elementals Planeswalker spark ignited and he was flinged through the multiverse. He arrived on the plane of Dominaria where he learned to use blue and red magic at the Tolarian academy for magicians. Therefore he has learned and mastered its arts.
In Arena Battle! Tarkur was one of the original attenders for the competition and the one too reveal the Gamemasters true intent. After a long and hard battle Tarkur sacrificed himself to save his friends but little did he knew that he would have survived an attack he for sure thought would kill him. He then found himself in White gate after several attempts of planeswalking who all had thrown him of onto the wrong plane. Now his here to figure out why he stumbled upon this place.

Probably my longest character sheet yet but eh I had fun making it.

Name: X45
Gender: Male
Weapons: a selection of many weapons and tools that can be pulled out at any moment
Mission: rescue Nimrack
Species: Unknown
Appearance: 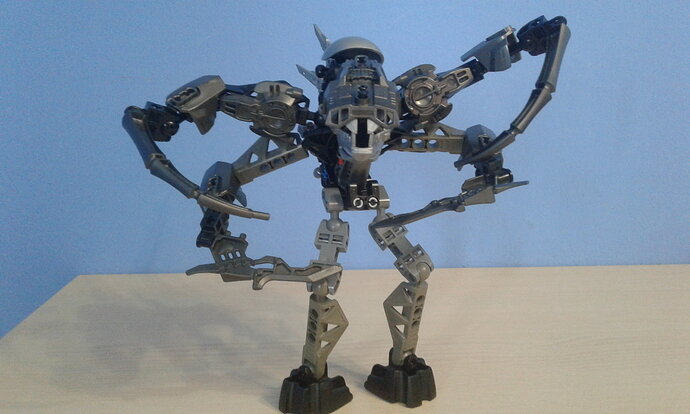 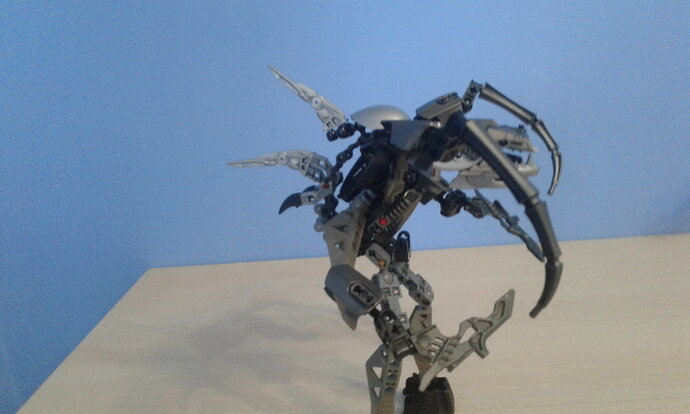 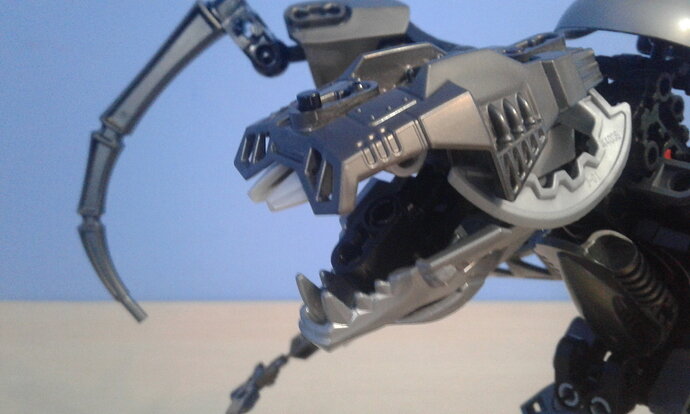 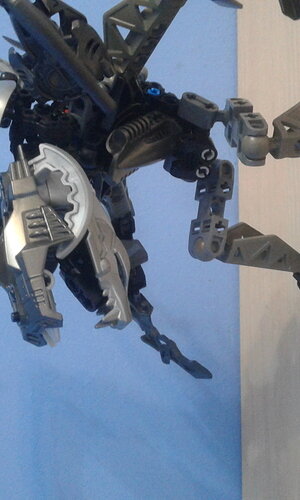 Name: Abraham
Position: Visits
Species: Archangel
Powers/abilities: The strongest angel after Michelangelo, he is extremely loyal, and he would die for the angels, at 30 feet tall he’s the largest archangel by far
Weapons: He mostly uses his fists but due to the immense loyalty he shows, he is sometimes able to call other angels in to assist, he has a massive hammer bigger than him and even a planet sized hammer, a gift from Leonardo
Appearance: 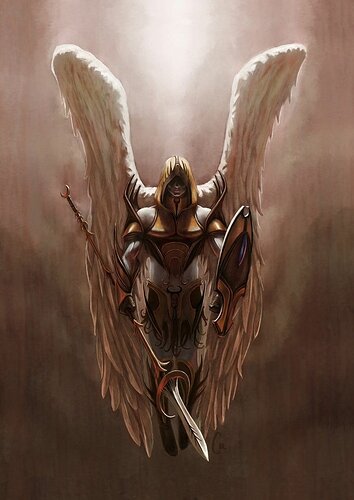 Name: Evangellos
Position: Visits
Species: Archangel
Powers/abilities: She’s a talented magician, even having some knowledge of the dark arts! She also is extremely intelligent
Weapons: The book of spells, it is her greatest weapon, she also has a staff of magic
Appearance: 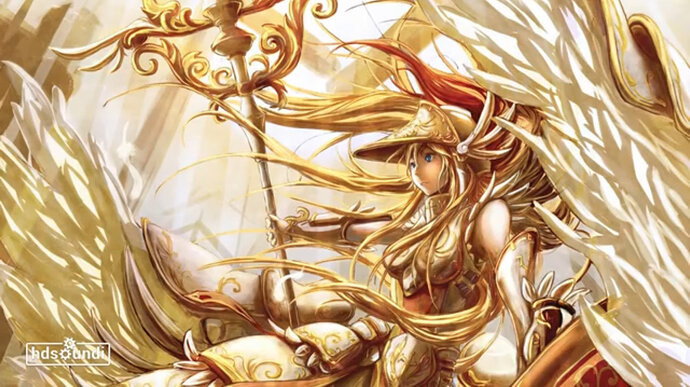 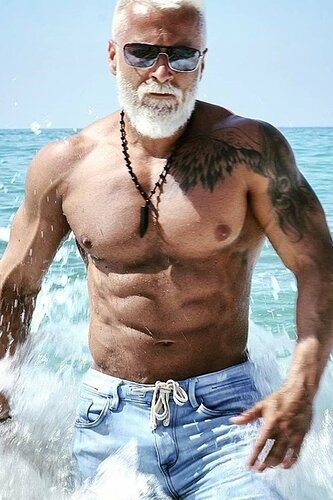 Personality/Bio
Years of reject have turned John nuts, he helped infinites and Xir’algath before being beaten

Powers/Abilities: Zaktra has the powers of electricity manipulation. Like Tarkur, he can also travel to any universe in The Multiverse. 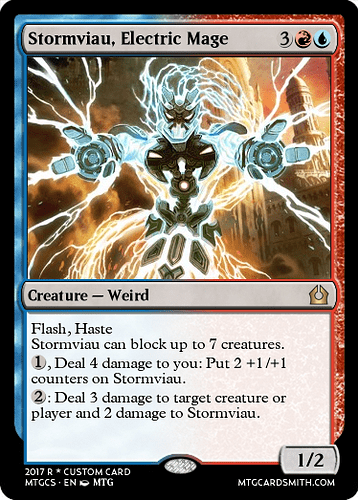 1492641864164924.png375×523 308 KB
(Picture only)
Personality/Bio:
Zaktra is in a sense @Tarkur’s son. He was formed from the discarded essence of Tarkur when Archangel Michael’s rejected it. He is now wandering Whitegate, searching for his “father”.
← previous page next page →