Exx gon give it to ya

My first official TTV fanart. It’s not terribly good, but hey - its only there for the joke. 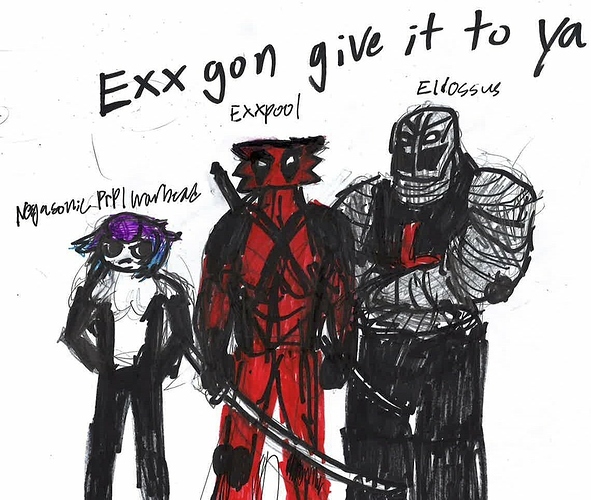 The style is very sketchy and busy, but the basic proportions are sound and the joke embodied is hilarious. Kudos to you, sir. Hopefully the rest of the TTV cast can be made into parodies of whatever ensemble shows up around (or against) Mr. Pool in the inevitable sequel.

note: the website kept giving me ‘502: bad gateway’ errors when I was trying to post this, but I kept trying. If this has turned into an insert-Latin-derived-prefix-for-number-greater-than-one-here post, that might’ve had something to do with it. Any repeated posts were obviously unintended and if any were present the mods will probably have eliminated them in short order already, but I thought I’d point out the encountered problem anyway.

The style is very sketchy and busy, but the basic proportions are sound and the joke embodied is hilarious.

That’s honestly what I was going for. Thank you.

It took me way to long to figure out the joke…
Bit I almost laughed when I did.
Good job sir.

I probably wouldn’t watch this movie.

I mean, how you gonna have Deadpool without the swearing, graphic violence, and general inappropriateness…

Why does it make so much sense for Eljay to be Colossus?