After waiting months for this contest, I’m finally back at home and I can upload my entries for this contest (and it’s even my first post on the boards)! All the images’ll be below in spoiler tabs and I’ll do brief blurbs about the design choices I made. About all of them, two things.

Kualus - His shoulder armor (two silver Avohkii) is meant to resemble icicles hanging down from a ledge. His spear follows that same philosophy, and his chestplate was chosen because the Nuhvok-Kal shield’s bumbs look like the Avohkii spikes. Mask of Translation is there because he wears the Mask of Rahi Control and I thought that connection would be funny, given he also speaks in the language of birds. 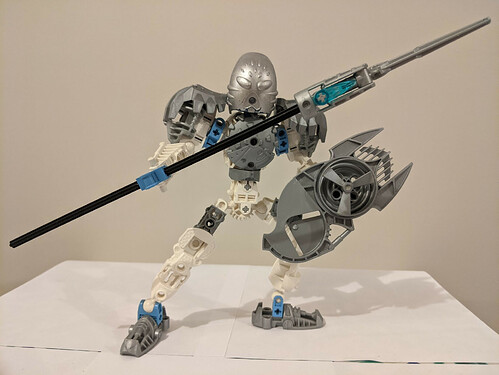 Pouks - Pouks was partly inspired by this line on his Biosector page: “Pouks is known to be loud and boisterous and believes in plain speaking and taking direct action rather than sneaking around.”
To that end, I wanted to give him the look of something like a football player (someone who charges right into battle), so I gave him the slightly beefier Inika knee armor and the wide shoulder armor. The Noble Miru fit that aesthetic the best (it’s also to have another Noble mask on the team with Norik). His spear is a G2 ‘hook spear’ piece, meant to mimic the ability of his Rahaga bolo spinner (going in low and sweeping the legs out from opponents). I also slid a heartlight in, just because I could! 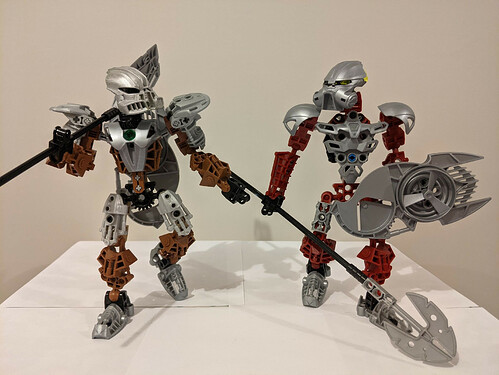 Gaaki - Gaaki originally had some Knights Kingdom armor pieces on her legs, but the contest rules required those to be cut. Given that Gaaki is a toa of Water, I wanted to give her the look of someone who can effortlessly cut through waves. The Great Miru, to me, has always looked like the prow of a boat, so it was a natural choice! The spikes on her arms and legs are meant to mimic fish dorsal fins. Her spear, the Tidal Spear, is an attempt to emulate waves crashing over each other (kinda). 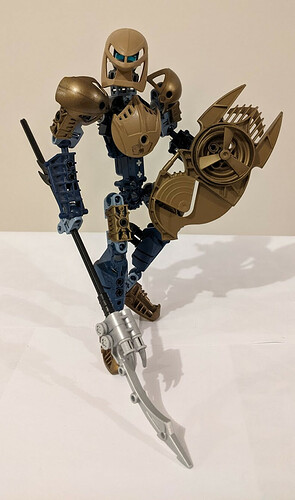 Bomonga - Bomonga follows the short, bulky earth toa design philosophy, and there isn’t a whole lot to say about him besides the fact that every piece on him, excepting his head, silver armor, and eyestalk, are black, which tracks with his exceptional skill of hiding in darkness as a Rahaga. His spear shape allows him to grab opponents from behind, which is a loose emulation of his Rahaga spinner effect of rendering them immobile. 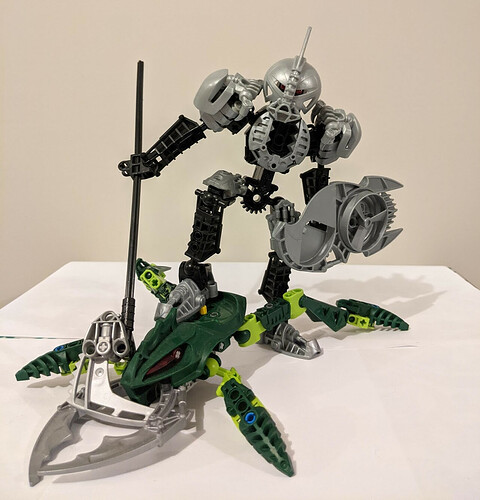 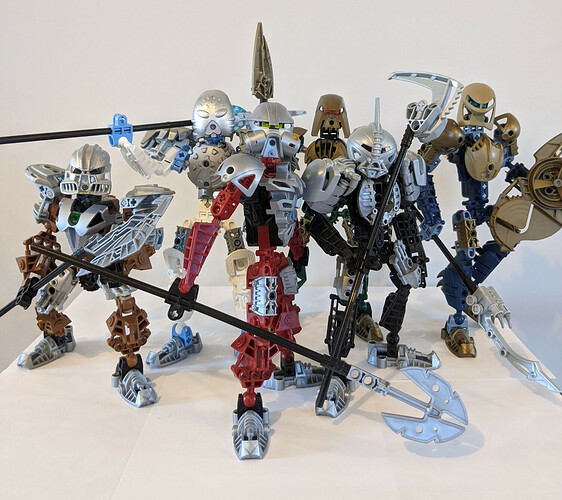 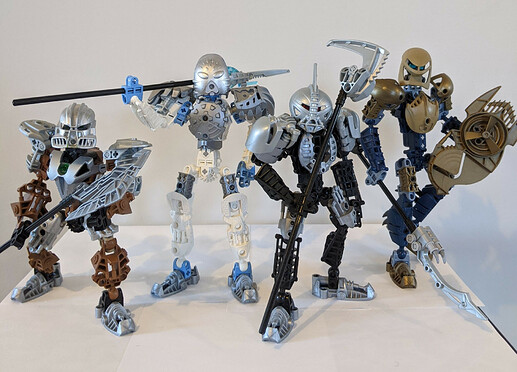 These are now my new favorite, I like these a lot because they are very unique.

Good job making them look distinctive while still looking ostensibly like a Metru build. Bomonga especially looks good with that shoulder armor. Mask choices are pretty solid too. Really hoping you’ll at least make it far in the contest.

These are pretty sweet! Although I’m pretty sure that Gaaki’s spear needs to be the same metallic color as her armor, so you might want to fix that. Still though, they look great, good job on these.

Impressive! These are definitely some of my favorites so far!

Thanks so much! I don’t think it’s a requirement to have the spear match the armor because of the text I’ve quoted here, but I’ll start brainstorming ideas for gold speartips just in case.

I like these a lot, they all feel distinctive and full of personality.

These are awesome, I especially like your Pouks! The group pictures are great, they really look like a cohesive team.

Thank you so much! I really tried my best to focus on team cohesion while keeping everyone distinct and easy to build. Pouks was very fun to brainstorm. His mask was tough to decide on, but after polling my friends the Noble Miru was the unanimous choice.

Thank you so much! That means a lot.