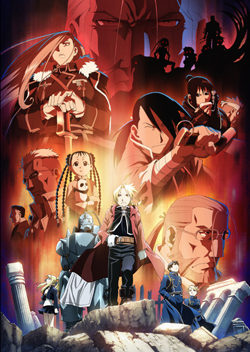 I managed to snag 13 volumes of this during the summer for .50 each

Full Metal Alchemist Brotherhood is awesome!
Better than the first.

I’m not that big on anime, but I love this show, though I’ve only watched the first 10 episodes so far.

Brotherhood, to be exact.

I liked brotherhood better. But still a great story. Only wish my brother didn’t watch episodes without me.

FMA is one of the rare Japanese cartoons I managed to get a glimpse on TV, along with Sailor Moon, DBZ and some kids’ shows. I didn’t manage to watch the whole show back then but I got around and fixed the mistake a couple of years back.

The setting of Fullmetal Alchemist was certainly what caught my attention from the start: two brothers travelling around a world of alchemy in search of the Philosopher’s stone to regain their original bodies. Tell me that doesn’t sound interesting, I dare you. FMA balanced its dark and light tones well enough for me to enjoy it as a kid and an older kid.

The original run also had the best cheesy shounen opening songs, winning even Naruto’s Fighting Dreamers (or whatever it’s called, for me it will always be Fighting Dreamers) on that aspect. The little kid in me flinched.

I haven’t seen Brotherhood myself, as it wasn’t the version I remembered and I wanted to watch the original first. I’ve heard that Brotherhood is better in pretty much every aspect, following the manga more obediently but having some pacing issues because of it. I’ll give Brotherhood a go once there is nothing else for me to watch.

Armstrong is the best.

watched brotherhood
Thats about it
I lieked it

A friend of mine has seen both and recommends watching the First series before Brotherhood. Just because they are so radically different and that you can appreciate the first one more after watching Brotherhood.

I have only seen the first one, merely because I have not had the opportunity to watch Brotherhood yet. I’d easily say that FMA on its own ranks in my top five favorite TV shows of all time.

Also, the first series was in production before the Manga ended, so they had to make the second half up. I’ve heard the two series are similar up until Scar shows up, and then radically split.

More so once Greed shows up, but there are some differences before then.

I presume ‘It’ since it’s both genders…

I liked both of the series, but Brotherhood felt better.

I have only watched the first few (10 episodes of both), I am not sure which one to finish, my good friend recommended I watch brotherhood, because it is “better”, what do I do?

read the manga
Watch the original, then brotherhood.

Okay, will do, at some point, after Dragon Booster…

Oooooh man
This is probably my top 3 best shows
I love it, the story and characters are really well-done and rounded out, it’s dangerous and tense but it also knows how to be funny at the right times.