Hi, Sokoda here and after quite some time I’m back with another Set concept. Like many others I did a set for the civil war.
As always, I added masks on the minifigures to show how they would look with these pieces. This time I also drew a background image for the set, please tell me if you like it and if I should do this more often.
This new Set has 929 pieces (including the 5 masks)

So here is the set: 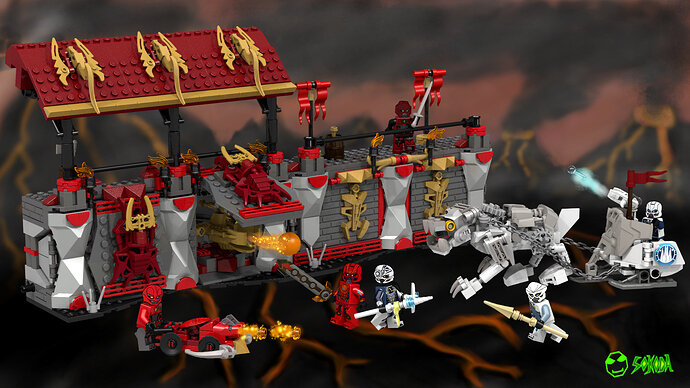 The new set contains the Mangaian wall, which is made of two segments, an Ice-Burnak with a sledge, a Ballista, that can be stored in the Wall, as well as the Minifigures: Tahu, Kopaka, two mangaian guards and tow ihuhan warriors. 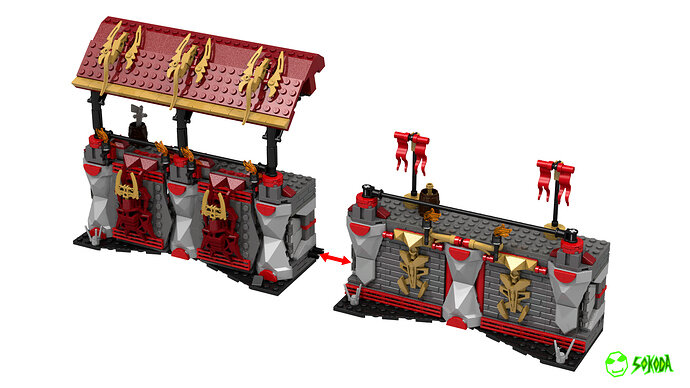 Mangai Wall Attack 5 mask.jpg1920×1080 451 KB
The Mangaian Wall is made of two segmants, that can be taken appart to create two small walls. Combined they form one long wall. For the style and arcitecture, I tried to stick as close as possible to the style of my Mangai Defense Tower. You will later see why.

The two wall-segments can also be combined to form a thicker wall, that is not open on the back 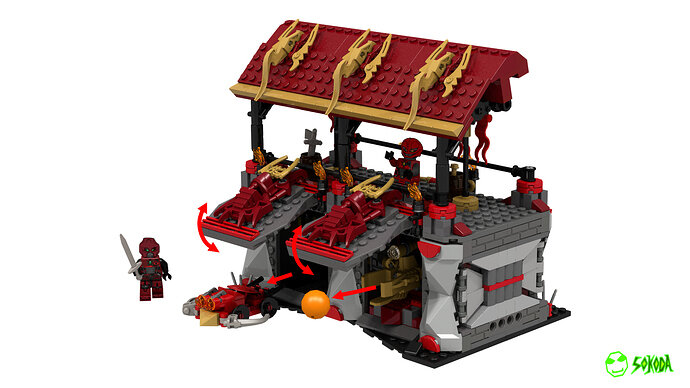 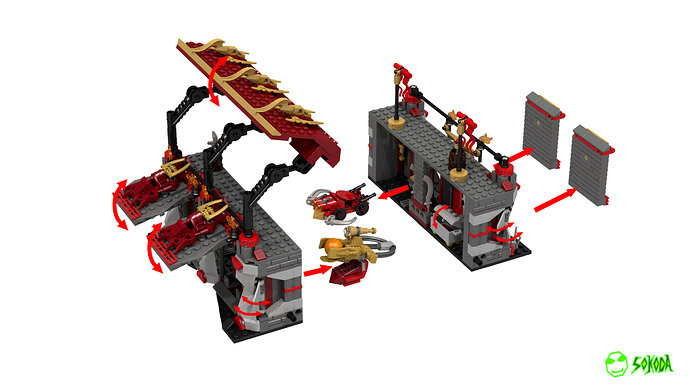 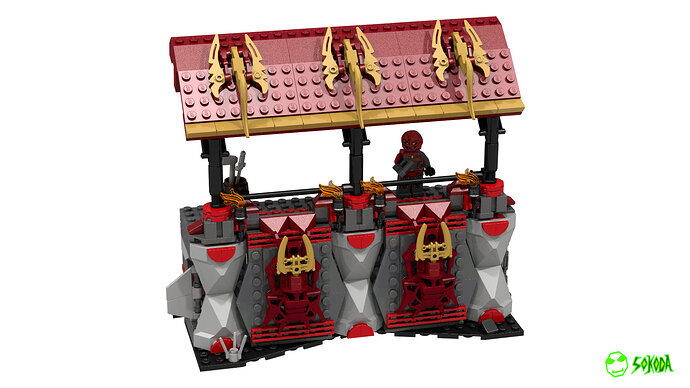 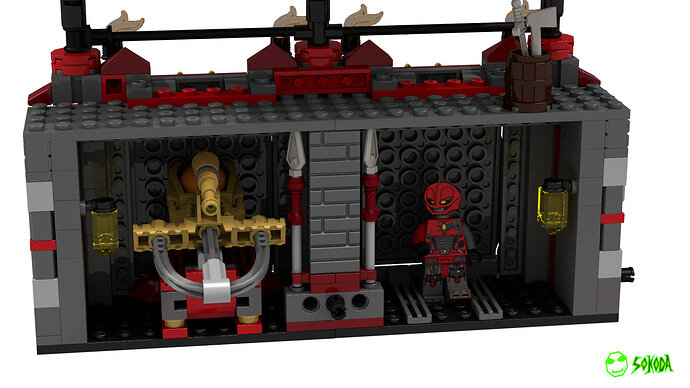 Mangai Wall Attack 10 mask.jpg1920×1080 452 KB
The first wall segment has a roof, two gates that can be opened and a Zamor launcher inside of it. The interior is decorated with light stones and some spears. 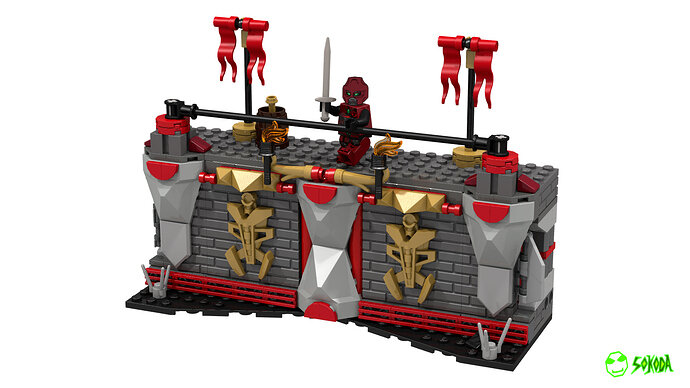 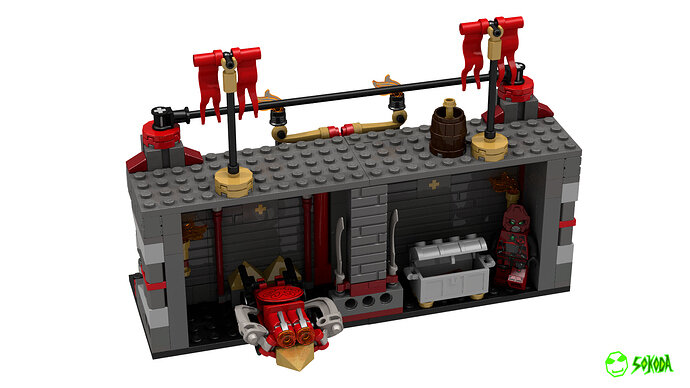 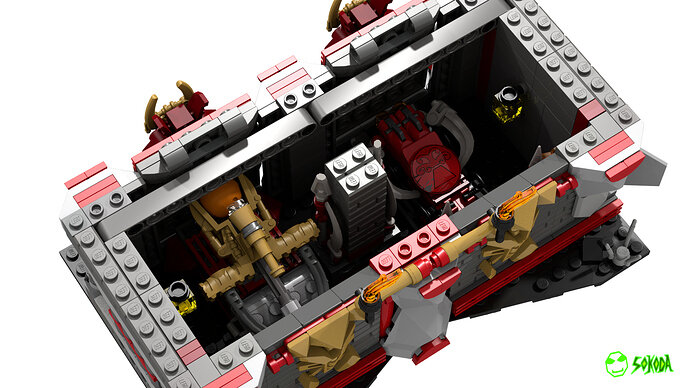 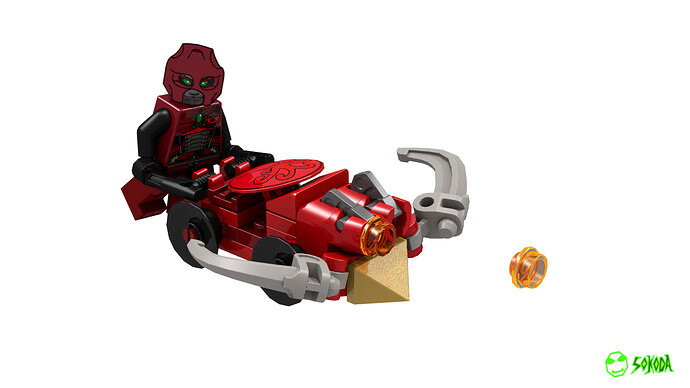 2. The Ice-Burnak with Sledge
Because Rahi are greate and I wanted to do a bit of conflict in the box, I added a Rahi for the Ihuans. It’s design is inspired by the G1 Iche-Burnak.
With this Rahi I really tried to make it look very bio-mechanical, because I think the classic Bionicle aesthetics of bio-mechanical beings in the nature is a great style that G1 had, which I think sould be contained. 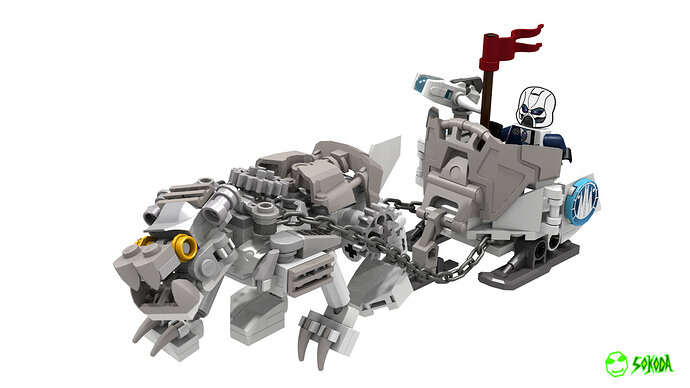 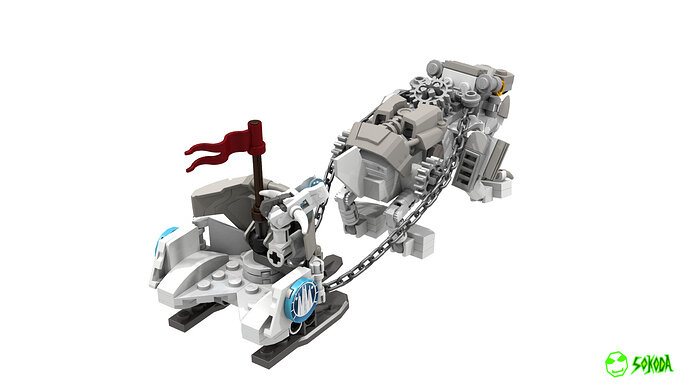 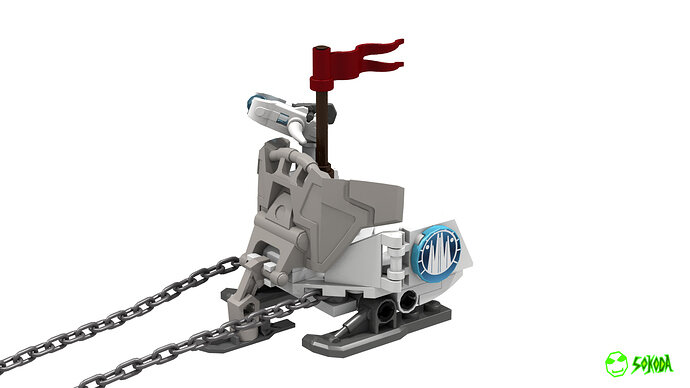 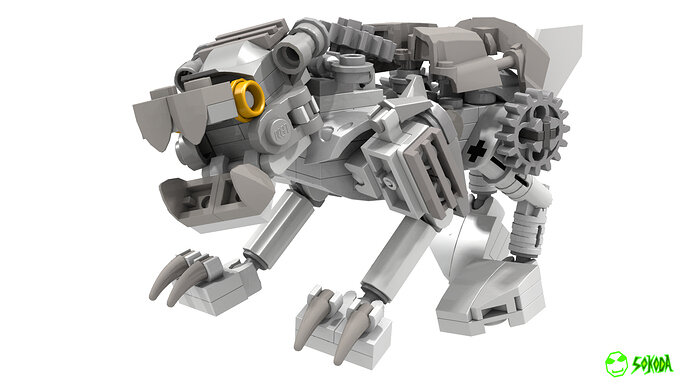 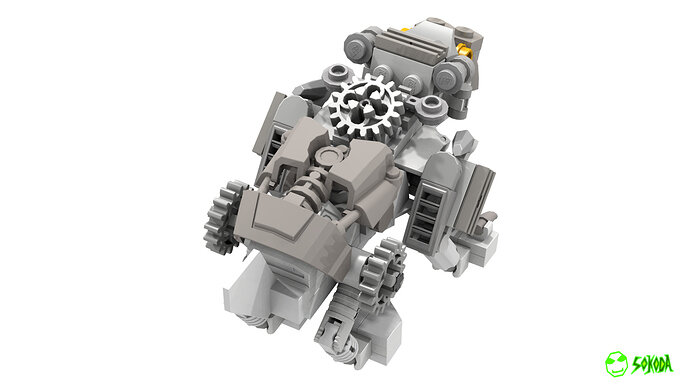 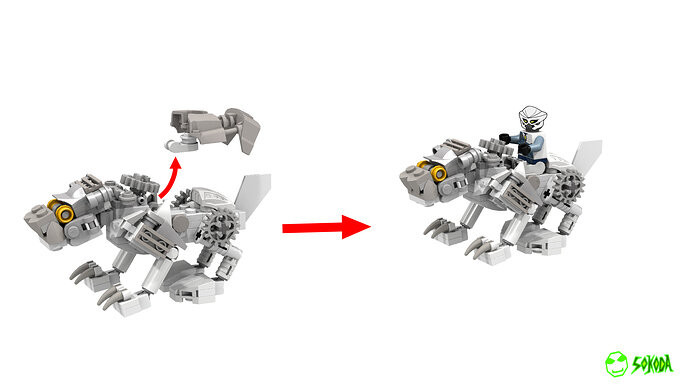 (By detaching the G2-pistin armor you can place a Minifigure on the Burnaks back. 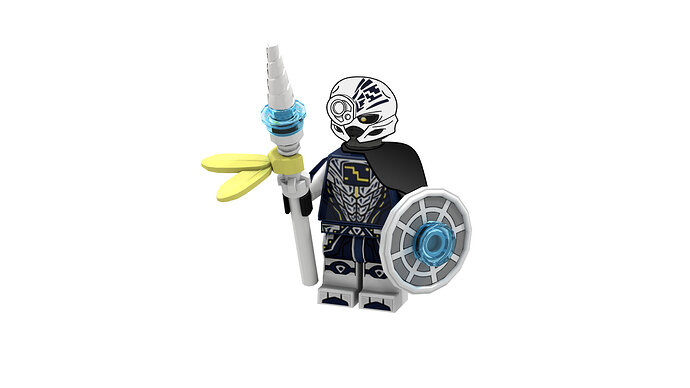 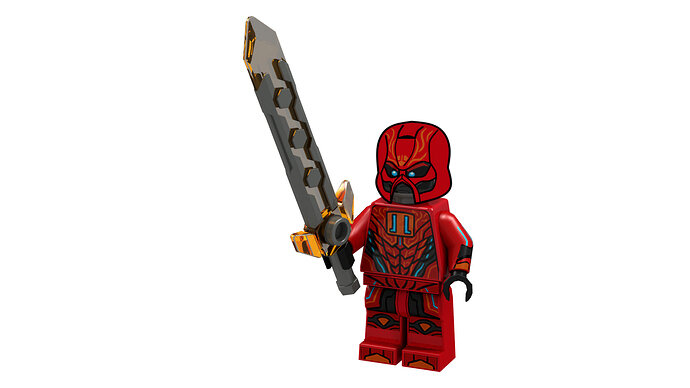 I included Tahu and Kopaka, because some people pointed out, that it would make a set more desirable, to have multiple Toa, because they are the main charakters. 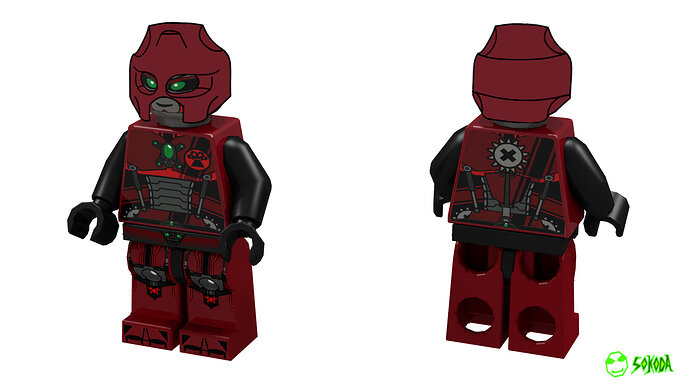 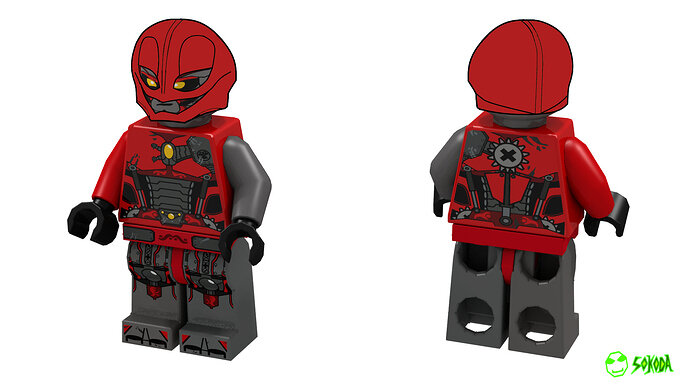 Mangai Wall Attack Mangai Guard 2 mask.jpg1920×1080 287 KB
The Mangai Guards follow the same design-concept as all my matorans. I tried to make them look a bit battle damaged and used colers like black and grey, so Tahu would stand out in an army of Mangaian Guards. 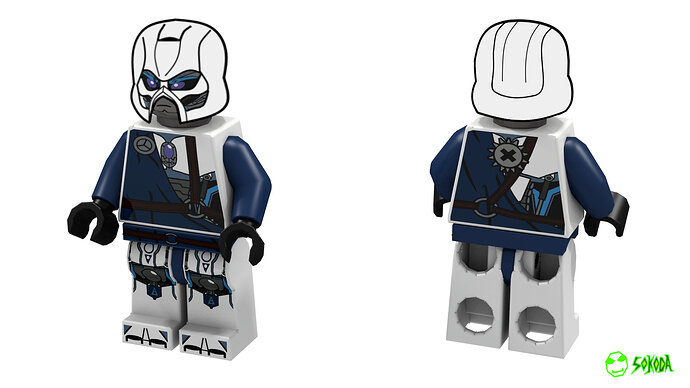 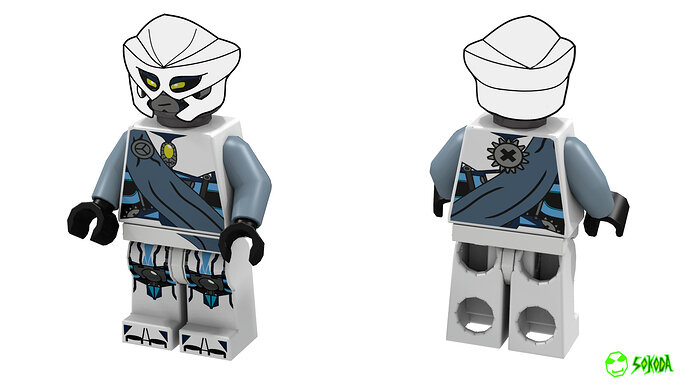 Mangai Wall Attack Ihu Warrior 2 mask.jpg1920×1080 236 KB
For the design of the Ihuan Warriors, I added some cloth to their design, because I imagine they come from a very cold region.

The Mangai Wall can of cause be connected to the Mangai Defense Tower (as @DarkHenrik alredy suggested). It can be attached to form multiple different Fortress like structures. Here are two examples: 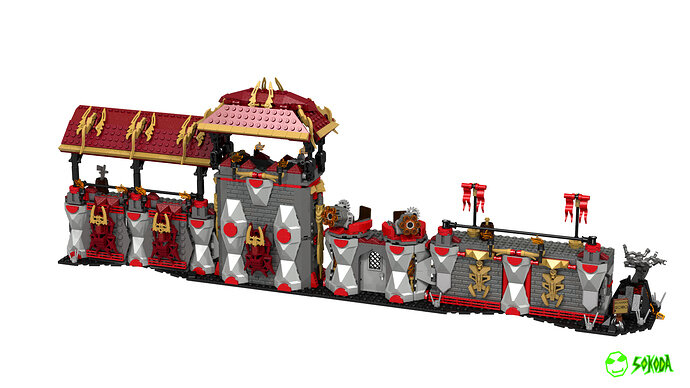 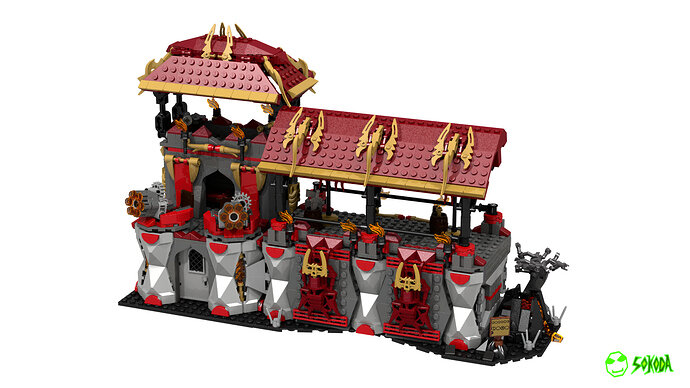 Mangai Wall combined 1.jpg1920×1080 486 KB
(By using the small flaps on the side of the Wall you can make the two buildings look like they are one.)

That looks awesome, I’d totally buy that. I don’t really have any criticisms of it either, which is a plus.

Looks pretty great! I like the use of the burnak.

The wall section, however, is rather large for what I think Lego would realistically include; they would probably only have the half with the function in it, seeing as functions are a primary part of Lego sets.

Yeah maybe they would do that, I wanted to Include both halfs, so you can make the version where the wall is completely closed, but I think it could work as a smaller set too.

This is so cool! I love the parts usage on the different parts of the set - the way you used the CCBS shell for the Ihu chariot, the way you gave Kopaka’s spear the little tassels, the columns on the wall - creative ways to shape everything.

Oh, what a lovely, lovely sight to wake up to.
Welp, better add Burnak to my bestiary then.

This is a great set; seeing the Toa facing off? like this really drives home the Civil War aspect. The sled is another cool little idea to see as well. And I can’t emphasize how much I adore the modular set design.

Yeah I have seen your bestiary its great.
I wasn’t sure if the Toa will teall face off, thats why they are back to back in the main image, as if they are trying to stop the fighting together

Which is an extremely smart touch on your part, nice one.

Why hasn’t Lego picked up this idea yet?

Ok, so first, well done this looks amazing overall but let’s do a full scale review just to be sure.

Overall, great, some minor pitfalls which are nitpicks in my opinion, I’d definitely buy this set, maybe amping it up with some battle packs?

I’m thinking of doing a modular defense set design once I finish my current G3 project, any tips?

Thanks for your comment, it’s great to hear other opinions.
About the Burnak: I wanted to make him look like a full on robot, because in my opinion most of the G1 Rahi look like robot-versions of the animal they are trying to represent.

You also asked for some tips about building modular. One thing I can recommend is building your new model right next to the old one, instead of building it and than trying to add it to the old one, this really helped me to make sure my two models fit together.

Oh yeah and I wasn’t that active in the last weeks, did I miss something? Who is the G3 moc team?

Nah it’s just a meme to refer to anyone who mocs for G3, there isn’t a G3 moc team, official or unofficial.

I wanted to make him look like a full on robot, because in my opinion most of the G1 Rahi look like robot-versions of the animal they are trying to represent.

That is fair enough, I suppose a biomechanical being could have all the mechanics on the outside, I try and do a mix and never make them go full in on either side.

Yeah I do too, thats why I want to make all my Mangaian sets connectable

Once again you have blown me away with the amazing quality of your work. The tower itself looks really cool (I love the inclusion of classic constraction parts and play functions) But also the Ice-Burnak is awesome and your minifigure designs are great!

Thanks man, comments like this really make my day