An associate of mine recently decided to create a Hero Factory based roleplay. As it has been a long time since I’ve been in an HF RP, I decided to go ahead and join. Doing what I did back in the first HF RP I joined and built a character in LDD first.

Sure, these days I could easily build on with physical pieces, but it has been a long time since I’ve last build anything in LDD. And this model certainly shows it, but the setting is the early years of Hero Factory, so I suppose simplicity works.

Without further to do, here is Gabriel Freeway, the Chief Commissioner of Sarazon 5’s Department of Law Enforcement. 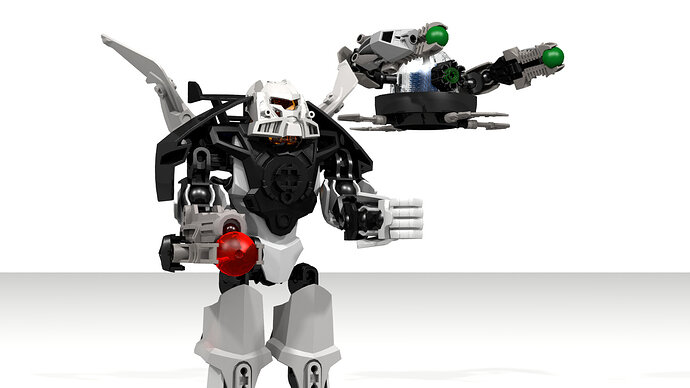 Yes, yes, the rest aren’t rendered. It took about two days just for the image above. Mostly because I forgot to do the transparent separate, but my computer needs a rest break. So screenshots will have to do, since Stud.io does not have the Star Wars rifle piece. 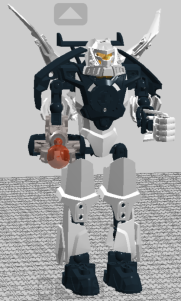 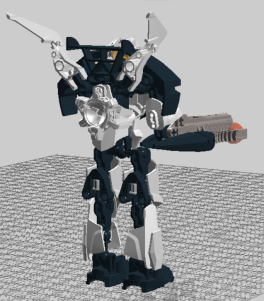 His drone and partner in justice, “Speedy.” 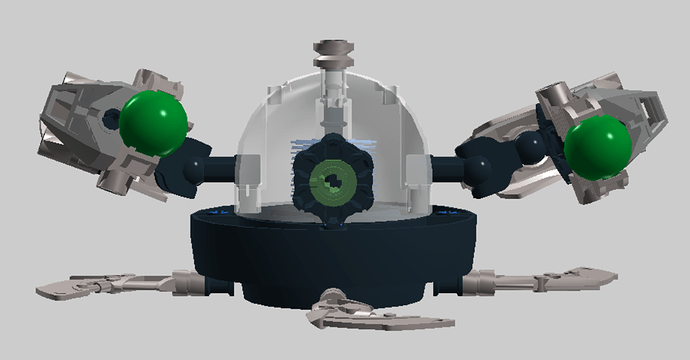 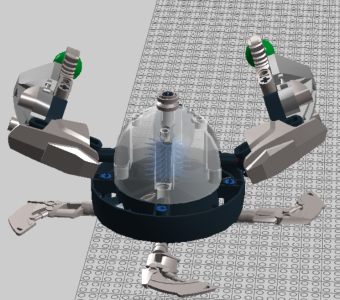 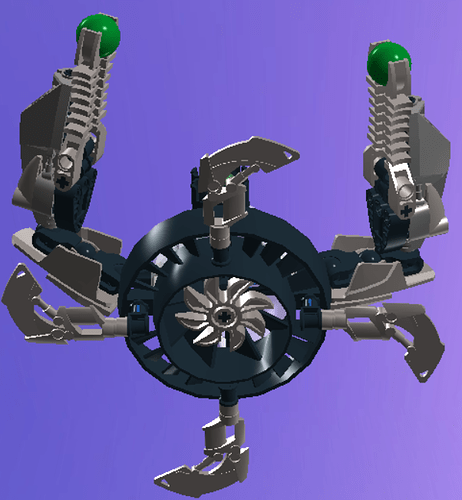 Gear and Weapons: Fairly light, Freeway has only one weapon module, the non-standard, modified S5-Assault Rifle. An old keepsake from the war, it can fire intensely concentrated laser beams that can blast through starcraft hulls. This more lethal, anti-aircraft portion however is kept in reserve, with the other launcher being the primary. The launcher predates the growing popular “Meteor Blasters,” but operates on similar principles. This one in particular generates and fires spheres of hot plasma. While weaker and shorter range than newer plasma weaponry, it is still likely to burn through the armored shells of bots.

Aside from his weapons, Freeway has the ability of flight. Able to catch speeding vehicles and even some aircraft up to a couple mach. Though reaching and passing orbit is beyond his standard equipment and requires either another module or vehicle.

Companion/Partner: Freeway has a drone companion nicknamed “Speedy.” The bot was one of Teraffic Enc.’s Speed Entrapment Drones and Freeway’s old partner back in traffic enforcement days. Back then, it was fairly simple, just scouting and watching for violators of speed limits. As Freeway moved up however, he took “Speedy” along with him, upgrading and changing as needed. These days, “Speedy” can view the world through hundreds of cameras at once and has two of the latest Meteor Blasters. These ones are designed with specialized spheres that are instantly absorbed by whatever they strike. The substance inside is designed to eat up all the fuel/energy of the target, disabling them. The time this takes depends on the amount of energy to be wasted.

Background: The Teraffic Enforcement Company, otherwise known as Teraffic Enc., is an old company that specialized in law enforcement equipment and bots. A bit controversial at the time, the company implemented different AI into each model, using an evolution method to see which ones succeed. Essentially, if any particular unit did well in the field, that one would be taken back, copied, and further improved upon. Some units would go on to gain quite the lives of their own as a result, well beyond what the company intended.

Unit designation US5CT36R15 would prove to be one of these special cases. Originally he was just a traffic bot, designed to keep roads and airways safe. Purchased by the Sarazon 5 planetary government some thirty rotations ago, he proved to be incredibly effective. US5CT36R15 did not merely enforce traffic laws, but started improving them. Rerouting roadways and altering timing of traffic signals, he garnered the nickname “Freeway” by the people by nearly eliminating all heavy (slow and/or stopped) traffic. It was free to travel with no slowdown.

Hoping that he would prove just as effective in other areas, Freeway was promoted. Though he had little chance to prove himself in that area as war came to Sarazon 5. A neighboring system launched a surprise invasion, leading to the unprepared Sarazon system to scramble a defense. Freeway and “Speedy,” as were any and all bots that could be afforded, were modified for war. And during this war is where Freeway would earn his other name, Gabriel. Often swooping in and saving lives from the war machines, he would be called after the guardian angel.

Luckily for Sarazon, his analytical mind provided useful in the logistics of the war. His company of bots led to many victories, halting enemy advancement in places where they traveled fastest and disrupted their supply routes. Despite his victories, Sarazon did not win the war, but was able to hold out long enough for galactic aid. When the war did finally draw to a close, US5CT36R15 was awarded and official recognized as Gabriel Freeway, hero and person of Sarazon 5.

He wished to return to his old position, but was given command of a SWAT team regardless. For a couple years, the SWAT saw a decent amount of action, old war machines still roaming from the war. But after that, it was relatively peaceful. Peaceful that is, until the universe at large started to suffer incredibly from “villain” attacks. Even with the war machines, little need came for them to have weapons. Now? He need it all the time. It was a new war, one without a reasonable end in sight. Eventually, Freeway was promoted to the highest position in the department, Chief Commissioner. Under his leadership, crime lessened significantly, but in these dark ages it was still rampant.

Then it happened. The so called “Hero Factory” arose. At first, it looked like a failure, but within weeks it became the most effective policing force the universe had ever seen. Teraffic Enc. saw the writing on the wall, as did its conglomerate corporate parent, deciding to shut it down before losses started to hit. The news hit Freeway hard as this meant no more firmware updates, equipment replacements, etc. His enforcement department, as well as many other worlds, were in trouble. Their units would only last so long and could only be repaired so many times. And with other companies starting to follow Teraffic Enc.’s lead, it would only be a matter of time before Hero Factory would replace them altogether.

And here we are at the present day. Freeway is having a secret war on the Hero Factory. Investigating and trying to find any and all evidence to bring the company down.

The moc is simple, but nice looking! I like the bulk (no pun intended) of the upper body; it kind of gives it a War Machine feel, which I think is a cool thing for a Hero Factory moc.

I don’t know weather to laugh out give criticism…

Well just simply stating you could give criticism in an ominous manner doesn’t really help the mocist improve at all. Do you think something should change? Personally I think it’d look just a little bit better if the armor on the upper arms got rotated 90 degrees, so the bones aren’t exposed on the front, but that’s just me.

His proportions are a bit wonky, but I would like to have a full picture, just in case

The moc is simple, but nice looking! I like the bulk (no pun intended) of the upper body; it kind of gives it a War Machine feel, which I think is a cool thing for a Hero Factory moc.

I don’t know weather to laugh out give criticism…

Well just simply stating you could give criticism in an ominous manner doesn’t really help the mocist improve at all. Do you think something should change? Personally I think it’d look just a little bit better if the armor on the upper arms got rotated 90 degrees, so the bones aren’t exposed on the front, but that’s just me.

Why thank you! Though yes, I do agree about the armor portion. In fact that was my original intention to place it in the way you suggested. However, I could not get the model to angle itself in such a way that would allow the armor shell to attach. LDD kept refusing, saying it was physically impossible. It didn’t want me to put on an armor piece at all for that matter, its current placement was the only one it would allow.

His proportions are a bit wonky, but I would like to have a full picture, just in case

There is a full picture, so I’m not quite sure what you’re requesting. I would give the LDD file, but these boards do not allow one to directly upload it.

Oh, I thought the fist photo was taken in real life, not a rendered version. My bad