Guns and weapons that resemble realistic firearms in Bionicle canon

I often see people giving their MOCs realistic-looking weapons, like rifles, machineguns, shotguns, pistols etc., and claim them to be part of bionicle canon. This really bugs me since weapons in G1 are usually some kind of melee weapon plus a gimmicky launcher like the Rhotuka or disc launcher. Moreover, even literal bounty hunters (the Dark Hunters) and the absolute scum like the Piraka don’t use anything like that. What do you think about people doing this and is it okay in your opinion?

I think it’s 100% fine. In fact, as some one who has done stuff like that myself, I encourage it. I don’t see why people need to fit inside the rather small box of bionicle cannon when building mocs. It’s Lego, be creative and build whatever you want.

I don’t feel like it’s okay, not only because guns just don’t fit with the whole aesthetic and stuff, but also because they are kind of… irrelevant to the story. “Oh, you have a gun over there? What does it do? Shoots bullets or some pew-pew stuff? That’s cute. Now get freakin’ obliterated by flames or something.” I mean, there are so many insane powers in Bionicle that using guns would be kind of… underwhelming (I dunno if this word fits here, but whatever)

But the MOCs aren’t canon either. Someone making a MOC with an SMG does not make SMGs canon, MOCs do not represemt official BIONICLE. Mocists are and should be free to create as they wish, there’s no harm there.

Should’ve clarified before, sorry. I don’t have any issue with guns being given to MOCs per se, but only when it’s implied that the character is related to the canon story. For example I’ve seen a MOC on Reddit that had “… of Metru” in its name, and the character wielded a minigun. That’s what I mean.

The Thornax launcher, while not really a gun is in story just used as one and has no real otherworldly powers. And it is used at least once to kill a side character in Bionicle lore. So I don’t think firearm would work in story any different.

Well, it doesn’t look like a gun to me. It has no barrel, no stock etc. I believe Tarix had it with something like a pistol grip, but it’s still too far from conventional firearms in terms of appearance.

Right but I still don’t see any there - they still don’t alter what the canon is. In canon, yes there are no guns, and guns would be pointless with everyone being bulletproof, but there’s no necesity for people to conform to that if they don’t want to.

If it helps any bit, realistic firearms are not allowed in the canonization contests, so no one is going to get one in.

I have nothing against realistic firearms in Bionicle MOCs. However, I wouldn’t vote for it if some included one in their submission to a canon contest (even if it wasn’t against the rules).

I think they established a rule against that. @Wolk already mentioned it.

Yeah, LEGO has a policy against realistic firearms. The guns they have in their original themes are quite cartoonish and simplistic.

I can’t say that they look that realistic. Before 2007(?) they were just those megaphone pieces with a stud, and even after they introduced those semi-realistic ones they still had just 3 templates - the pistol one, the medium one and the rifle. Those were used for all characters even though in the story there was an abundance of different models and such. Additionally, Star Wars isn’t LEGO’s property, so I believe that they had to compromise and create pieces that would look close enough to the source.

I think people are perfectly free to have whatever headcanon they want.

underwhelming (I dunno if this word fits here, but whatever)

“not with that attitude!”

Seriously though, as someone who makes a lot of guns, they’re only boring if you let them be. While some things have to stay, there are many designs and alterations you can make to make them look cool. After all, all of the OG trilogy of star wars’s blasters were all modified ww2 guns. 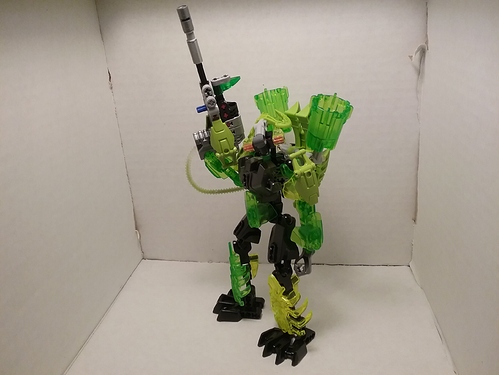 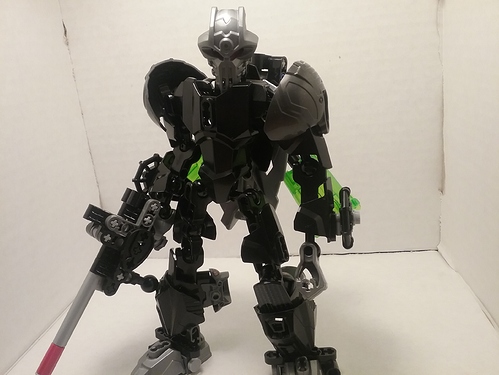 A couple of my personal examples.

In canon, yes there are no guns, and guns would be pointless with everyone being bulletproof

I dunno, AP ammo exists, as do HEAT shells.

I think that laser guns would work well in bionicle.

If anything you can think of them as a Toa tool. A piece of equipment which has the sole purpose of hyperfocusing that Toa’s elemental power into a beam or bolt. I’ve only ever moc’d up one or two ever but thats what they were in my mind

The secret that people won’t tell you is that guns are a part of BIONICLE canon. Not firearms, necessarily, but “guns.” Let me give you a list:

Furthermore, there are the semi-canon weapons from the Voya Nui Online Game. While not strictly a part of canon, I like to consider them canon as mass-produced, cheap weapons that are common throughout the parts of the MU that the story didn’t explore in depth. The reason we didn’t see them in canon is because all the characters we dealt with in the story were highly-skilled, specialized fighters who could afford or were issued unique weapons. I couldn’t find any images of the [Element] Launchers from VNOG, but they are very clearly rifles that fire whatever element is in their name; by extrapolation, an Iron Launcher would effectively be the same as a real-life firearm and a Plasma Launcher would pretty much be a science-fiction plasma weapon such as a Star Wars blaster.
Here is the Nui Blaster from VNOG, which deals Air, Fire, and Water damage simultaneously in-game:

If you’re creative or willing to bend the confines of what is “canon,” then guns are certainly a possibility. I prefer to give them a certain “BIONICLE” twist (Iron Launchers, for example, aren’t firearms, but get the job done). There are many, many ways to achieve the same results as a firearm in BIONICLE without actually using a gunpowder cartridge and a projectile.

Hmm, thanks for the explanation. This is probably the only reply here that convinced me to change my opinion.