Have you seen this?

Not sure if you guys have already seen this or not – this is the pitch I wrote up for the 2010 movie, which never made it as far as review by the story team (so it is NOT official).

BIONICLE 2010 MOVIE
We open with a fast recap of how we got where we are – Mata Nui, exiled from his universe by an evil power, arrives on Bara Magna. He finds himself allied with the small villages that dot the region against fierce invaders from the north, the Skrall. In the end, Mata Nui leads the villages and their glatorian to victory, and discovers their shelters were in fact pieces of a giant robotic body. As a thank you to the warriors who helped them, he bestows new elemental powers on them and dubs them Toa.
We then include the “coin” scene from the end of Legend Reborn, as the coin becomes important. Mata Nui states that he needs to find a source of power for the body they have built, and that perhaps that source lies to the north – the Skrall, after all, had technology unlike anything the other villages have. But if he and his new friends are going to make this journey to an unknown land, they will have to be alert every step of the way.
Cut to Ackar, at night, sitting on the jungle floor with his back against a rock, sound asleep. The next moment, a burst of water hits him in the face and he wakes up, sputtering. Cut to Kiina, water still dripping from the end of her weapon. She tells him it’s time for his watch. Note that Kiina looks different than how we saw her last, with her armor and weapon changed.
The explanation for this becomes obvious. Mata Nui, Ackar and Kiina are camping in an abandoned Skrall outpost. There’s a cache of armor and weapons there. As Ackar outfits himself, he speaks to Mata Nui about their absent comrade:
ACKAR
You know, Berix was really hurt when you said he had
to go back to the village. It was just a bad sandstorm,
and he got a little banged up. Nothing he hadn’t been
through before.

I can’t be responsible for his safety.

Their conversation is cut off by a noise coming from the path behind them. Ackar volunteers to go scout and see what – or who – is back there. He starts back the way they came, his feet leaving molten footprints in the ground. He is trying to be stealthy … but as he gets close to the source of the noise, he loses control of his new fire power again and a nearby tree bursts into flame. Revealed in the light, he is an easy target for a Skrall warrior who was hiding behind a rock. The Skrall fires his weapon and hits Ackar, who goes down (though he is not badly hurt, just bruised).
Seeing this, Ackar flips out. His eyes glow, his voice as he shouts “Ackar!” takes on a weird echo effect – and suddenly the rock the Skrall was hiding behind becomes animate and grabs the Skrall, starting to squeeze. Ackar gets up at this point, looks from Mata Nui to the Skall and back, and says, “Hold it!” Startled, Mata Nui returns to normal, the rock goes back to being a rock, and the Skrall drops to the ground.
Ackar grabs the Skrall and asks him what he’s doing here. The Skrall explains that there is nothing left for him back in Roxtus and he wanted to go back home. He was hoping to join up with Mata Nui’s party, but got startled by the flames and thought Ackar was attacking. Kiina, awake now, doesn’t believe the Skrall for a second, but Mata Nui overrules her, saying he understands what it is to just want to go home. Kiina says that home is the last place she ever wants to see again.
Ackar has other things on his mind – like how Mata Nui just did what he did (Mata Nui has no idea). He’s also pretty sick of these new fire powers Mata Nui gave him, which almost just got him killed. Kiina laughs, wondering how any Glatorian can not want a powerful new weapon? At that moment, she loses control of her water powers and it starts to rain … but only on her.
Mata Nui asks the Skrall what his name is. The Skrall replies he has no name … he is just a Skrall warrior. Complaining that he can’t just call the Skrall “Hey, you!” the whole way, Ackar gives him a name. (This should be something along the lines of “bucket head,” insulting but not vicious and amusing enough that kids will laugh at it.) The Skrall assures him he will carry the name with honor.
As they move out, Mata Nui asks the Skrall why his people left their homeland to invade the territory to the south. The Skrall reveals it was not by choice – they were forced out by invaders they could not defeat. As best as they could guess, the invaders came from inside a massive volcano, a place of great power. Sometimes in the night, the skies were lit up all around by the energies given off by the mountain. Skrall warriors were sent out to try to attack the volcano to stop the invaders, but none ever returned.
Mata Nui tells the others he is convinced this volcano may be what he is looking for – a source of power for the new mechanical body. But it is his fight, not theirs – they can turn back. He reminds Ackar that he was chosen to lead the combined villages, and should be back there. Ackar cuts him off, saying any number of Glatorian can lead the villages – only one is Mata Nui’s best friend. Mata Nui is touched, but obviously a little uncomfortable to be leading his friends into danger. As they walk away, none of them notice something emerging from a nearby mountainside to follow them … something that wasn’t there one moment, then appeared the next. (((These are the 1HY small sets, the shapeshifting mechanical guardians of the maze.)))
The party moves on, Ackar keeping a careful eye on the Skrall. The terrain changes from jungle to ice forest, marked by trees that make giant redwoods look like twigs. It’s only when they find one whose base has been partially exposed that they realize these are not “trees” – they are dozens of legs of beings like the Mata Nui robot body – just legs and feet from past Great Being projects, resting here, abandoned. They are in, in effect, a snow-covered junkyard, littered with massive BIONICLE pieces all in a jumble.
A perfect setting for an ambush.
The attack that follows is furious and frustrating for the heroes, as they are up against mechanicals with an advanced chameleon power and the ability to ■■■■■■■■■■. The enemy appears, attacks, and vanishes. This particular attack is primarily fire bolts, but strangely, they never seem to hit their targets – or do they? It’s Kiina who realizes the truth in the midst of the fight – the enemy isn’t aiming at them. They are aiming at the natural features around them, bringing down avalanches and felling “trees” to box the heroes in. And they’ve done a great job – all but one of the paths out of the region they are in is now completely blocked.
KIINA
Don’t you see? They’re not trying to capture us
or kill us … we’re being herded, like sand grafs into
a pen.

That’s all I can say about the ending.

so, we could have gotten Skrall Armor Ackar, kiina and mata nui sets?

also, didnt we know about thd dinosaurs already? I think I’ve seen some concept art about it

There would not have been any official concept art for it, since the story team never got a chance to look at this. There might have been fan art. I’ve discussed the concepts before online, but couldn’t recall if I ever shared the actual document.

This would’ve been a pretty good movie.

Shame it got cancelled, really.

I remember reading this before on your old BZPower blog.
Nice to have it posted in another location, though. The first was written up way back in 2009, and involved a fair amount of digging to find again, so this topic should be slightly easier to get to. Thanks, Greg!

Such a cool story and a answer for the giant rahkshi limbs in the background of the 09 titans
Could we have gotten EL sets?

Nice! Yeah, I technically had seen this before, but it was something like 5 years ago (or more) on BZPower, well in advance of the date that I signed up as a member. Thank you for posting this; not sure if we could get it pinned by a fellow who =has the authority to do that.

The extent to which G1 could have continued on Bara Magna has always fascinated me; I’ve felt for quite some time that the 2009 arc stands as the greatest well of unfulfilled potential in Bionicle’s hostory; more than Mahri Nui, more than the entirety of G2. As it were, I loved Legends of Bara Magna and am certainly glad to see this once again.

You did indeed post this on BZP, but good to have somewhere else.

This is really cool, it’s a shame that we never got to see it, it seems a lot more interesting than the limited 2010 story and also a bit better than the Legend Reborn. I like how the Skrall isn’t generically evil and we get to see some of the lore behind the Great Beings

I had hopes to do a lot with the GBs if the story continued. It was a big part of the original story that had been unexplored, and since there was nothing on them in the original story bibles, we were free to go whatever direction we wanted. I think what would have probably happened is Velika’s plan would have failed, the GBs would have left Spherus Magna somehow, and the Agori and Matoran would have been left to build a society of their own. Of course, there would have been all sorts of half-finished GB experiments laying around that would have caused problems later and probably some twists about their true role in things.

Oh my gosh what a massive influx of potential story content. Awesome stuff.

A dinosaur were shown once in a comic panel, depicting Bota Magna. I can’t remember which comic this is from though. 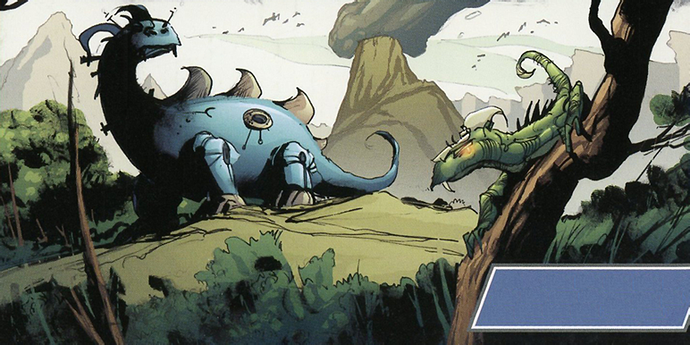 I knew it, I knew I had seen it

It’s from Legends of Bara Magna, that final anthology graphic novel that Papercutz put out. All Our Sins Remembered, if my memory is up to snuff. Loved that one.

I don’t know if you’ve answered this before, but do you think it’s at all possible that, at some point in the future when you have more free time, we’ll see some creative writing from you on where you would’ve taken the story? Or any new story content from you?

Hi - I cannot write anything for BIONICLE without permission from LEGO Company, and somebody there would have to approve it. Since the line is inactive, I can’t see them wanting to devote the resources to do approvals.

Such a cool story and a answer for the giant rahkshi limbs in the background of the 09 titans
Could we have gotten EL sets?

Uh, I don’t know if you noticed, but we already got the answer for what was with the giant limbs in The Legend Reborn. It’s the robot used by Mata Nui to fight the Teridax-controlled Matoran Universe in the 2010 story. If you haven’t, I’d recommend you go look up something called the “Mata Nui Saga,” which covers the main story of 2010.

I believe he was an actual earth tribe member, stranded from the rest of his kind, who resided on Bota Magna