My inspiration for this one came from me getting skull grinder v Ekimu and Skull Scorpio and being kinda disappointed with both of the sets. I don’t want to sound ungrateful but… you’ve seen them both. So I decided to make a two headed flame machine! I thought the mask and Chesapeake for skull grinder were both kinda steampunk style so I tried to make it steampunk but it really didn’t work. 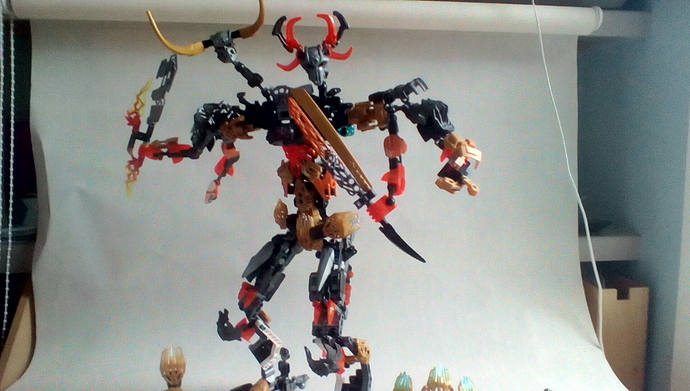 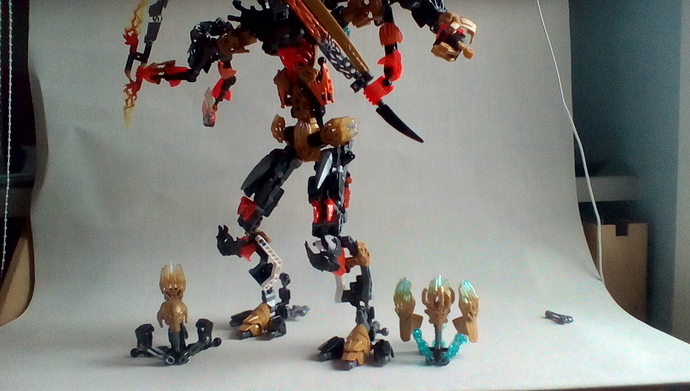 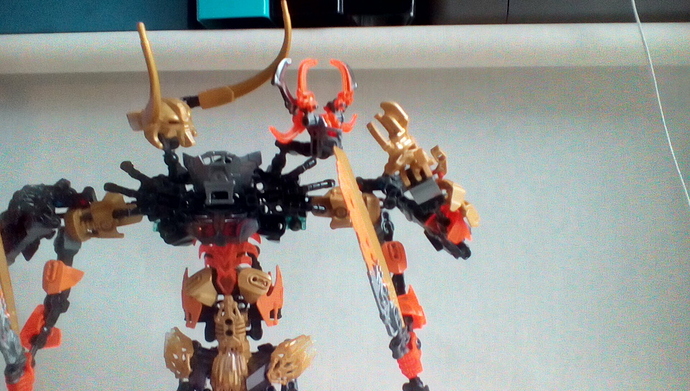 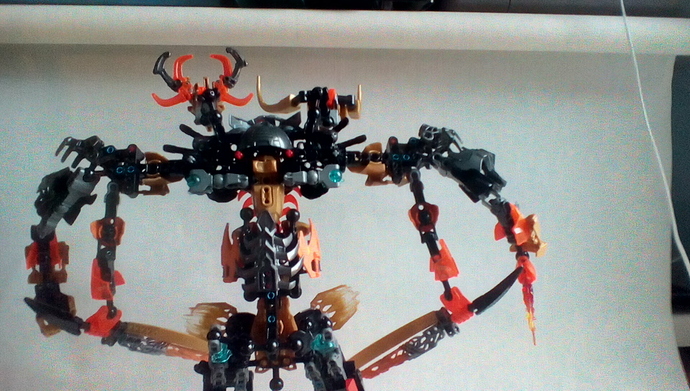 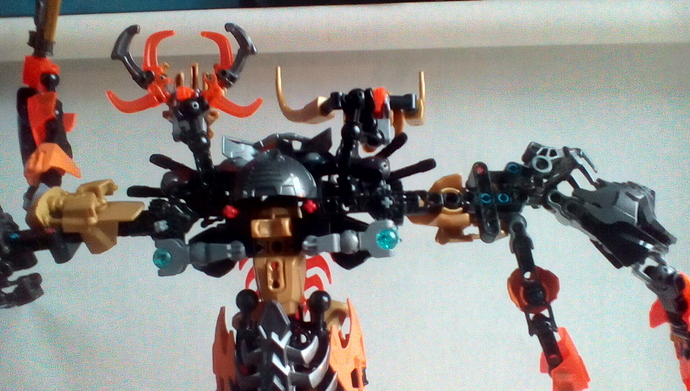 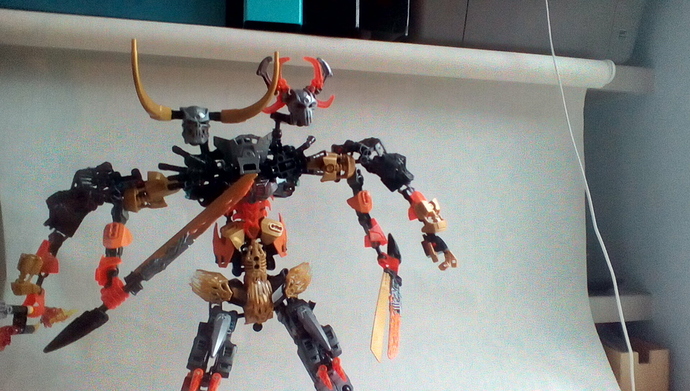 IMG_20170208_1657185_rewind.jpg1920×1088 662 KB
Posability: Articulation in the ankles is a tiny bit limited due to the two ball joints and a bar-thingy being there but apart from that it has three in the legs( has extra support on the things and so side to side on the knees) three in each arm, checks three in the neck and the shoulders are slightly configurable to give him her an easier posing experience.

Special features: Him her has 6 weapons; one magma cleaver, a gold-hot sword, a magma spear, a scorpion-tail axe, an obsidian multi tool and a demon shield.In addition he her has two holders on his her thighs to hold two weapons but has to hold the other four.
His her shoulders use the new bionicle 2016 torso skeleton pieces as shoulders so it works in exact same way except horizontally.
The masks are both made up of two masks, one golden and one skull. The pair’s( Ekimu and Scorpio and Makuta and Grinder) need to stay on each head and can’t be mixed because of the crown on Ekimu’s gets in the way of The other two masks but each none can be swapped to either give them some serious power or make them look different. In my opinion all the combinations look good with the exception of scorpio on top and Ekimu on the bottom because the eyes are too obvious but I made a Velcro cape to cover that up and now it looks awesome.
The cape is pretty small but it’s supposed to be used as a face mask not on their back.

Story: So this is a deceased Toa mixed with a skull warrior. The head with the silver horns is a boy and it’s name is Ignus, toa of magma and the one with the crown is Skarax… the skull warrior.
One day, Ignus was having fun, chatting with his best buddy, Razor (Toa of lightning) and then Tahu came along and ruined it. Tahu started to get jealous of Ignus because he was meant to use fire swords and cool lava stuff , not this new Toa! So he made a devious plot to make Ignus fall into lava. Although his plan was not to kill him, kill him he did…
Then skele-toa was exiled by Ekimu for being a threat to peaceful society even though he was not the one in the wrong. Because of this, Ignus became bitter toward the Toa and in the end he found Skarax, the skull warrior. She became friend with him but one day, makuta decided to fuse the two to make an almighty titan!!

Please forgive the use of white lift arms in the legs, I had no grey or black left, only white.
I am also aware of the use of blue pins and I apologize for them, I did try to ago did them where possible but in some places they were unavoidable.

Here are some of the earlier designers I had, concept builds if ya want. 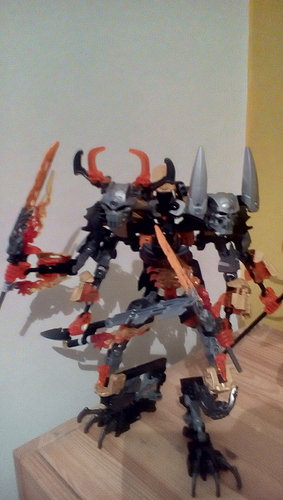 A message for any of the TTV cast
I just wanted to say thanks for all the awesome content and keep up the good work, you’re the best community-based channel on YouTube and I love to listen to your podcasts and watch the M.O.C spotlights and recap/ recent reviews and top 10s. Venn if you see this I would probably explode if I saw this on the M.O.C spotlight because most of my friends don’t think it’s good enough! : ) if you do decide it’s good enough then I have more pictures! >.<

This is very messy and cluttered, not to mention gappy in areas

Concept is really interesting, and the general shape and proportions you have here looks pretty good, actually, it’s just the execution that needs some work.

If these are all the pieces you have for Bionicle MOCs, then there’s not much you can help, but if you have more pieces, then definitely go ahead and start filling in gaps wherever they are. That will make him feel more complete.

Secondly, I’d see if you can’t get the colors a bit more consistent. Right now I see he has silver, trans-orange, gold, red, black, and gunmetal as colors, which is way too many and it’ll make him look cluttered. Try making him only two or three colors, perhaps black, red, and trans-orange or maybe gold.

Lastly, I’d try and get some better pictures. If you have a better camera, try and use that one. If you have a place with a lot of light around, try and set up a photo booth type of set-up there and put down a blank, white background. That will help people see the MOC a lot more clearly!

Not bad at all, though, keep it up!

I really like the idea, and I appreciate the sheer size of this MOC, I do however agree with @PakariNation99 this MOC is really thoughtful and I feel like you got a good outline for your MOC the only thing is there is a lot of gaps and I feel the coherency of this MOC is disrupted by all the colors I think you can fix that however by cutting out a few Colors and filling out this Moc a bit (remember if you don’t have parts Bricklink is your friend!)

a few other things
I think the arms are a bit skinny and while it kind of comes as creepy and unsettling I would kind of personally like to see them a bit more robust (but that’s up to you entirely!)

secondly I really like your initial design for those heads more than your final version I think they’re more befitting for the tone of your MOC also I kind of feel that the Mask of Control and Creation stick out more than any other mask, again this is a rather subjective viewpoint so feel free to ignore it.

Keep up the work though I’d love to see this guy get worked on a bit into what I imagine could be a pretty cool MOC!

@PakariNation99 Thanks for the great feedback! Ill go ahead and remove some of the excess colours but I kinda need to keep the silver in there for the masks, and the gun-metal for the thigh armour.
This is not really all my bionicle pieces but most of my bones and gold, and trans-Orange shells I have.
I’m going to remove the red be a use there’s only two red pieces in there and I’ll try to fill in the gaps.
The only gaps I see right now are one’s above the legs( the legs I will admit we’re a little rushed ) and the shoulders are flimsy. The gap in the chest is being saved for something my mum is making for me, it’s a super-small red bulb with a tiny battery that’s going to look like a heart.

@Spacenid Thanks so much for checking this MOC out and taking the time to give feedback, it means so much to me as this is my first post. >.<
As I’m only thirteen I can’t but things from trickling but I will definitely work on his/her arms. I did originally have the general grievous body so I just kept the arms the same.
I’m also going to remove all the red and all the opaque orange, but I’m not sure weather to keep the gunmetal or the silver.
I will revert the masks but you can also swap the masks around and that looks better in Ignus( horned head) but worse on Skarax( crowned one).Reverting the masks also frees up a considerable amount of pieces for making other MOCs such as the piece with one socket at each end and an shell attachment in the middle x2 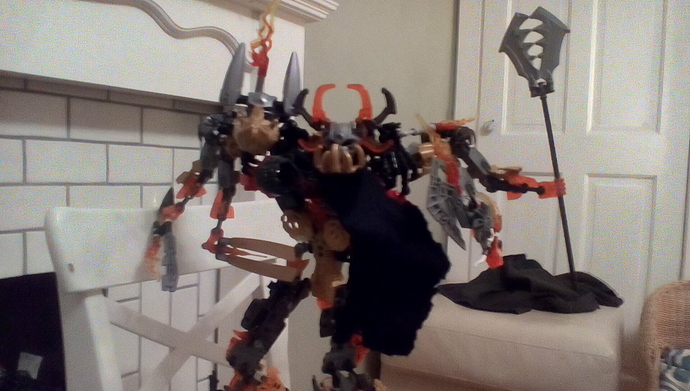 I’m working on it.