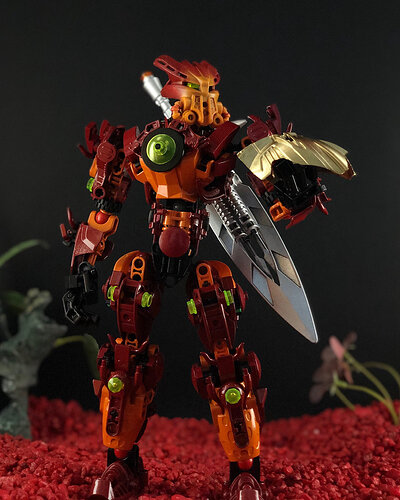 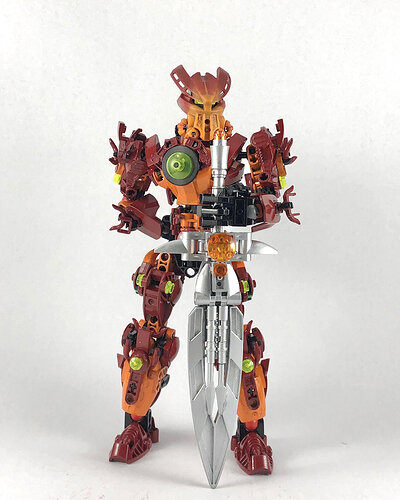 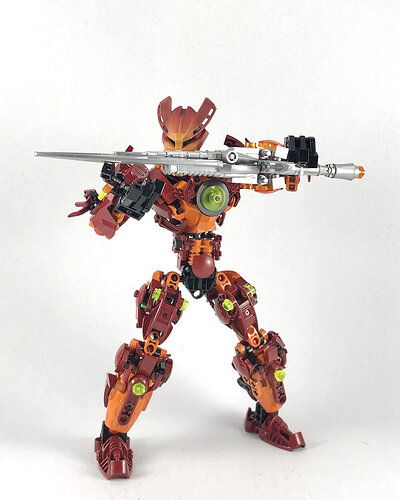 Bio: 200 years since the Reformation of Spherus Magna, Jaller continues to faithfully lead the Toa Mahri. Their now famous hunt for the Mask of Life has won his team great acclaim among the matoran of Spherus Magna, and the stern former Captain of the Guards is held in high esteem as a model of heroic virtue. In addition to his toa duties, Jaller has taken up a position of instructor to the next generation of toa and glatorian alike who comprise the greatly expanded defense force of the Great Tribal Federation of the former Great Barren. Although Jaller’s strict discipline and high standards often wear down on his new trainees, many come to begrudgingly admire his valor and daily living by example. And behind the scenes, he is a stalwart advocate of the integrity of his students - often against the casual dismissal of the more judgmental among the old world elders. Turaga Dume in particular once summarized the matoran born after the Reformation and in the absence of the Great Spirit as “The first generation to not know Virtue” , a view which Jaller passionately pushes back against. Still, the former captain recognizes that times have changed, and that the next of the united tribes’ defenders face new kinds of challenges distinct from those he and other toa have come to know. 200 years of unparalleled growth and optimism are now being weighed against the reality of rising tensions between the Protodermans and Spheran natives, continually volatile borders between newly allotted territories beyond the former Great Barren, an increasingly alarming generational divide among the matorans, and above all else, the sudden reemergence of Energized Protodermis from the planet’s core. Jaller knows well that proper instruction will be crucial now more than ever before…

Wow, this is incredibly well built! Getting an Inika build to be this detailed is quite impressive!

Very nice MOC itself. Great ditalization. Especially the sword. Cool background. 200 years are exactly how time in Bionicle is going while there is no Toa Nuva around. But, in my opinion, you have missed one thing - Artron is useless on solid ground, and it said on BS01 that Jaller has recovered his Hau (actually Lhikan’s Hau), so it would be even better if he weared that very mask instead of Artron. Also, are there are some painted pieces?

I love your style so much

Artron is useless on solid ground

Nowhere is it stated that the Arthron is useless outside of water. There’s no reason it should be - it’s a mask that utilizes echolocation, a technique proven effective both in the water and outside of it in nature.

That said, Jaller reclaiming Lhikan’s Hau and using it is a concept that I’ve been a fan of in the past. In this case, however, I still like the Arthron - its distinctive shape and colors are kind of signature for Jaller, and they work out beautifully in this MOC.

This is literally insane, I love absolutely everything about this MOC, except the massive heartlight. But geez that greatsword o_o

Yes, I agree, I’ve made a mistake - need to upgrade my knoledge about Kanohi, then.

Was that explicit in the story or just a greg answer? The only thing I can find on this is a forum post where Greg mentions the Toa Nuva probably handed Jaller’s Hau back to him. And even then, it’s not clear whether he wears it again or just keeps it. If Greg answers something online that never actually factored into the official story at all, I’m more than happy to ignore it altogether. Plus, I don’t have the heart to replace the Arthron here with a Hau; that mask is one of the best things to come out of G1.

Also yes, every piece you can see in these pictures is painted except for his mask, and that’s only because I can’t do a 2-tone meld. Oh and trans pieces obviously.

This is such a pretty design, I got chills when I saw it, I also like the bio too.

Oh my, so it is that much painted pieces… It probably from some of Greg’s answer (actually, if not counting them canon there is lack of information in Bionicle), but tha is said on BS01: “Jaller wore a powerless noble Komau in Metru Nui, Turaga Lhikan’s Noble Hau on Mata Nui, and a powerless Calix for a brief time in the realm of Karzahni. Lhikan’s Hau was taken by Karzahni when Jaller received his Calix, but it was later retrieved[10] and likely returned to him by the Toa Nuva.” I agree that is unkown if he wore Hau or not, but I just think that might be a cool concept and that Lhikan’s special Hau might look cool on Your MOC. But Arthron also loooks pretty well, of course.

This looks impressive! Though I believe his original feet would fit better.

this is incredible, please do nuparu next

Hmm, he was my favorite from 07. Tempting…

This moc is really friggin cool! I love the way you did his armor too. Overall great moc! 10/10

excuse me i am making a bionicle comic and Jaller his one of the secondary characters, can i use you’re design for him?