So I’m back again with a another topic of my 11th generation exo suits. I have heavily updated my exo suits since my last topic and i’m kind of satisfied with the exo suits. Although i do have to apologize for my camera taking skills cause they suck and if you guys want me to take more photos to see the moc clearer just ask, I’d be glad to take more photos. Well let’s get on with it.

I first made the exo suits cause i was kind of jealous of everyone else’s gigantic mocs and wanted to make a suit for my regular sized self moc so that they could beat up other people’s mocs. I drew a lot of inspiration for the design for suits from Pacific Rim, Gurren Lagann, Gundam, Transformers, and Appleseed.

Here are some interesting facts. I created the 11th generation mechs in 2014 when i heard bionicle was coming back and was just starting to watch ttv. Each mech stands around 22-24 inches depending on the head designs. These generation of mechs can actually stand and pose even without their pilots in it. Also the exo suit heads are not 100% my design, The jupiter war mech’s head is 60% my own but i did take the head design from another moccer. The Shinobu war mech’s head is 80% my own and i took it from the same person. Here’s their deviant art page: http://demon14082000.deviantart.com/

Some lore about the operations of the suit. The suit is controlled by a neural interface between the suit, the pilot, and the a.i… The pilots have to be surgically augmented (like the Spartan IIs from the Halo Franchise) so that they are harder, better, faster, stronger, and that they can handle the neural load from both the suit and the a.i… Their actual pilot suits are a combination of the Mjolnir armor (from Halo) and the Guardian Armor (From destiny) and that can still be used as an enhanced combat armor. When the pilots connect with their mech suit their helmet visor receives transmission from the mech’s head and the movement of the pilot’s helmet controls the movement of the mech’s head. The pilots arms dangle out of the mech to allow it control the mechs arms, and the pilots legs rest inside the mechs thighs which simulate the terrain the mech is walking on to allow fluid movement. The neural connection also simulates the stress/conditions the mech is under to help the pilot know the condition of the mech while piloting it. Some examples are that if the mech suffers an severed limb the pilot will feel a simulation of the mech having that limb severed, if the mech is carrying something heavy the pilot actually feels the weight of the item they’re carrying, if the mech’s head is blown off it could potentially knock the pilot unconscious. But if the mech’s head is heavily damaged the pilot can eject the head and use the chest visor which in turn could nullify the risk of getting knocked out by decapitation, but the pilot has to turn the entire mech’s body if they want to change views. The mech’s simulations though are not as intense as the actual feeling, however pilots try to avoid such stress if they can help it. 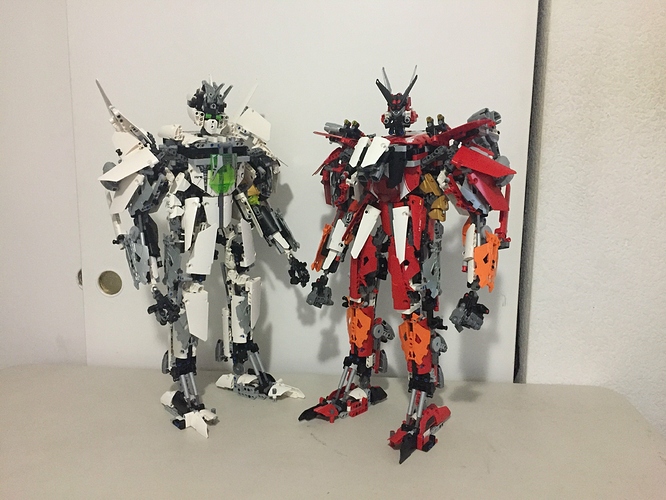 The Jupiter War mech was designed by Cayde (my primary self moc) to help assist him in missions that require extra firepower and can act as a all terrain suit that can survive underwater/space/ and in the sky. The suit has an A.I. built in it to assist him in operating the mech suit and it’s various systems/functions. Also I kind of went crazy with the boosters on his suit cause i wanted the suit to look like it could be able to fly and wanted it to be agile. 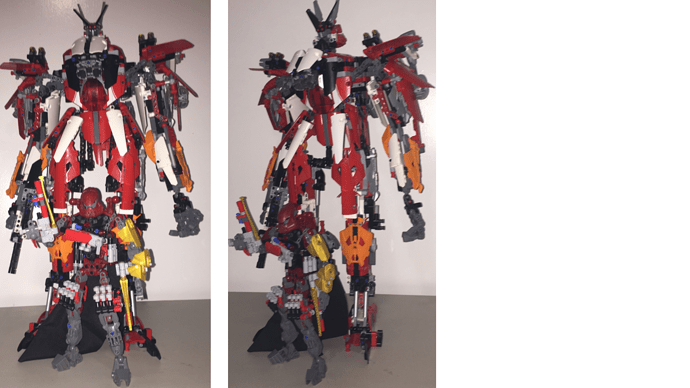 (Size Comparison between Cayde and Jupiter) 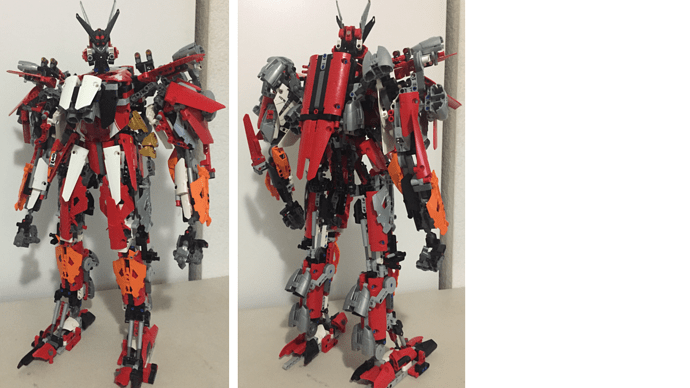 (Front and Back. The chest booster piece can also be removed to allow a flatter chest. The lower back legs were heavily influenced by the Optimus Prime’s booster on his legs at the end of the movie AOE.) 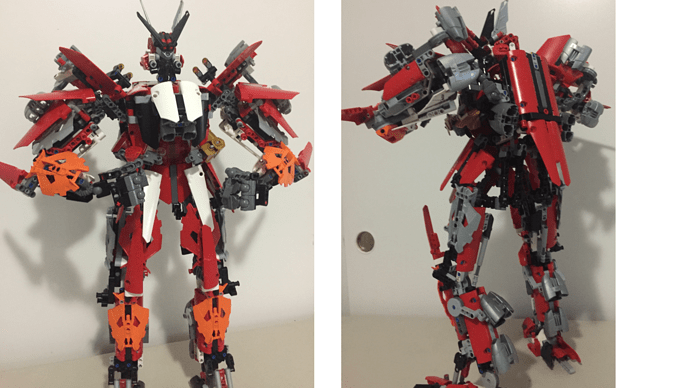 (Jupiter posing. it’s kind of hard to pose Jupiter because the ankles of the suit only move back and forth and instead of being fully articulate, but it’s not so hard that it can only balance standing straight. I’m just too lazy to actually pose it.) 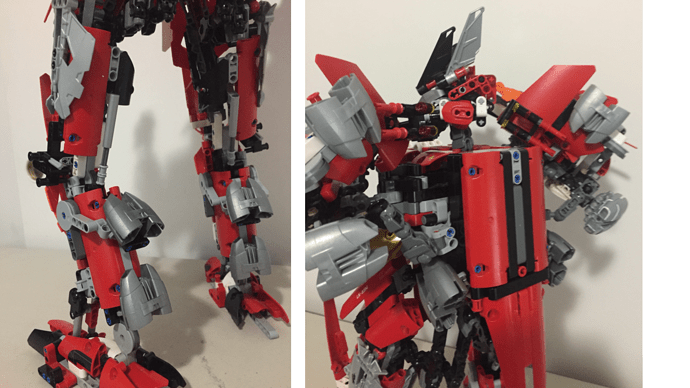 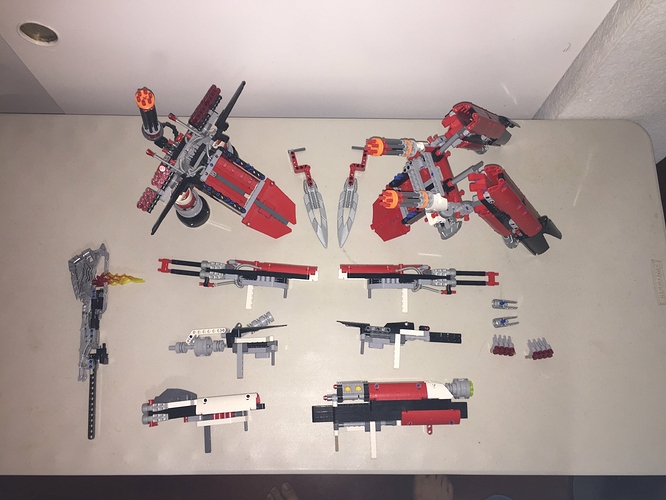 (Jupiter’s full arsenal: Tyrant Power Pack, Star Sailor Power Pack, 2 high powered rifles, 1 hand cannon, 1 side arm, 1 scatter shotgun, 1 high powered cannon, shoulder missiles, 2 high frequency arm blades, 1 high frequency battle club. The suit also has retractable arm dual cannons and arm machine guns, but i forgot to include them in the photo. The Power packs have to be installed in Cayde’s workshop in order for them to operate. The 2 rifles, battle club, scatter shotgun, and cannon have to be carried on his back before he enters a mission as they can’t be stored within the suit. The hand cannon, side arm, shoulder missiles, 2 arm blades, arm dual cannons, and arm machine guns are build into the suit and can retract out for use.) 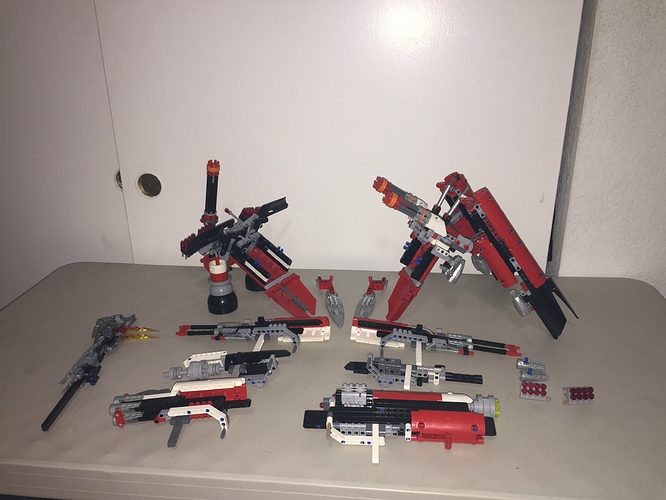 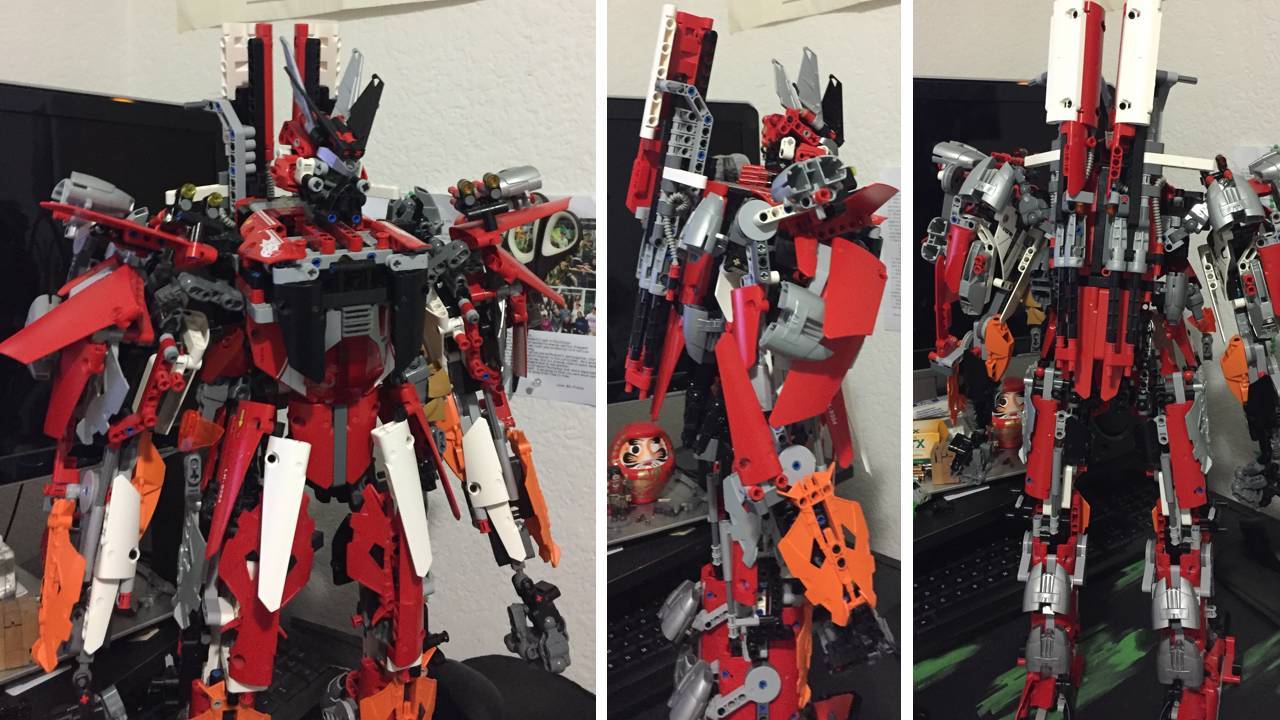 (twin rifles holstered on Jupiter’s back.) 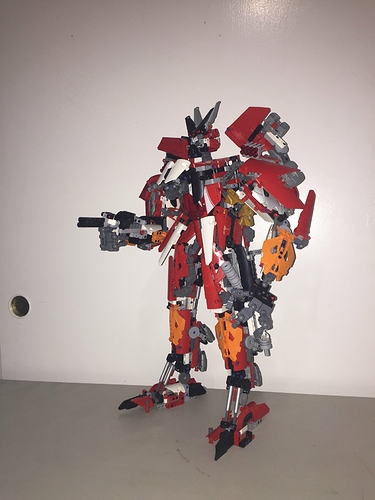 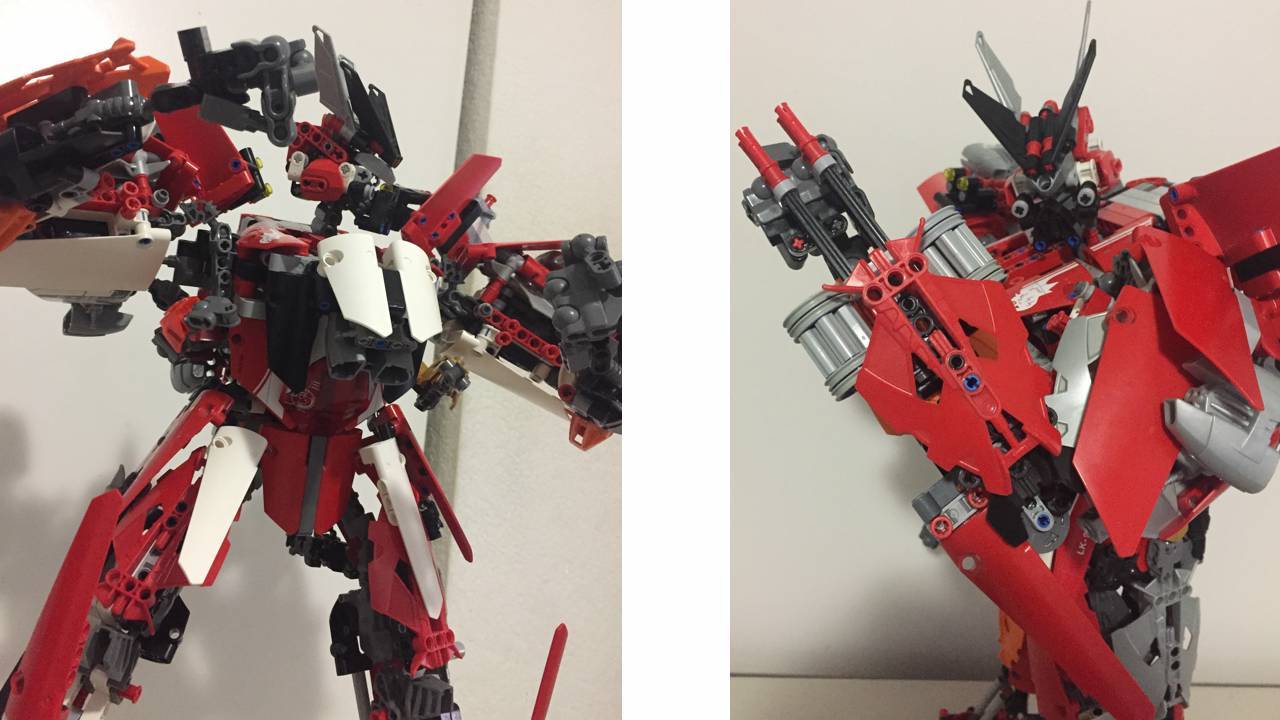 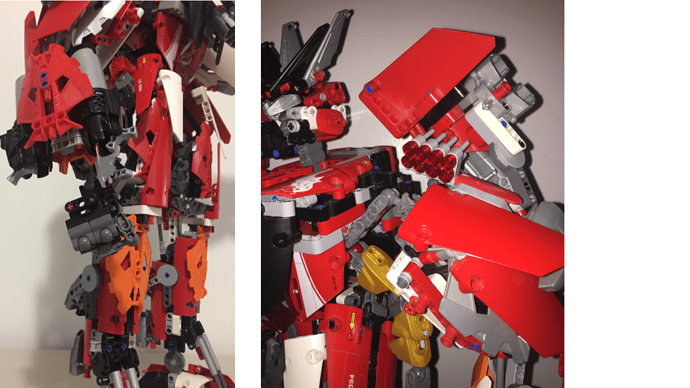 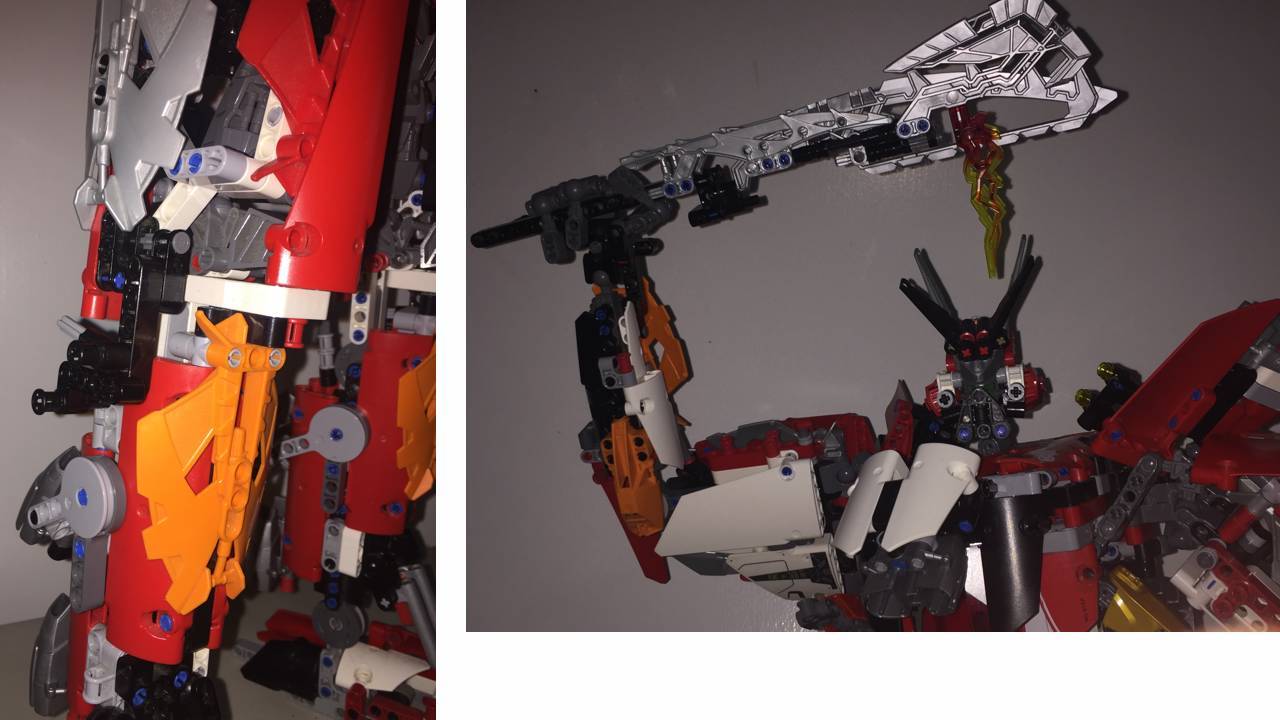 (The black piece next to the orange shield piece allows the suit to firmly grasp the battle club.) 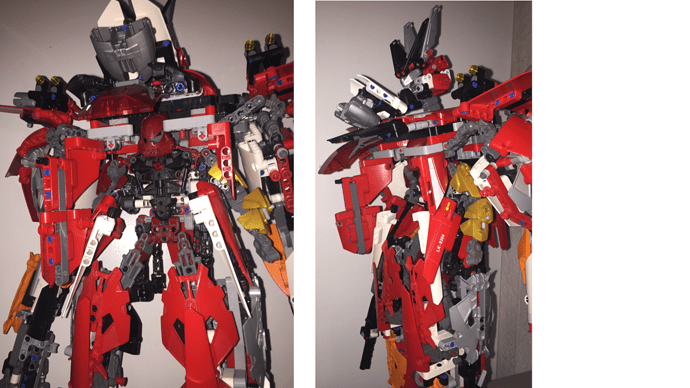 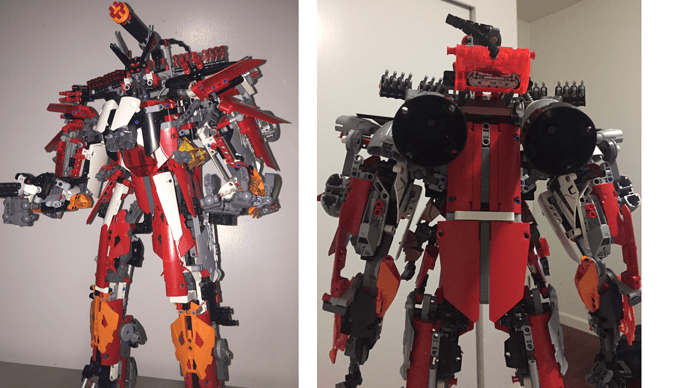 (The Tyrant Power Pack has one chain gun mounted on the back with 16 missiles on each shoulder and twin boosters on the back to allow it to reach greater heights faster. Also the “flood lights” on the shoulder pads are also small turrets to help fend off enemies.) 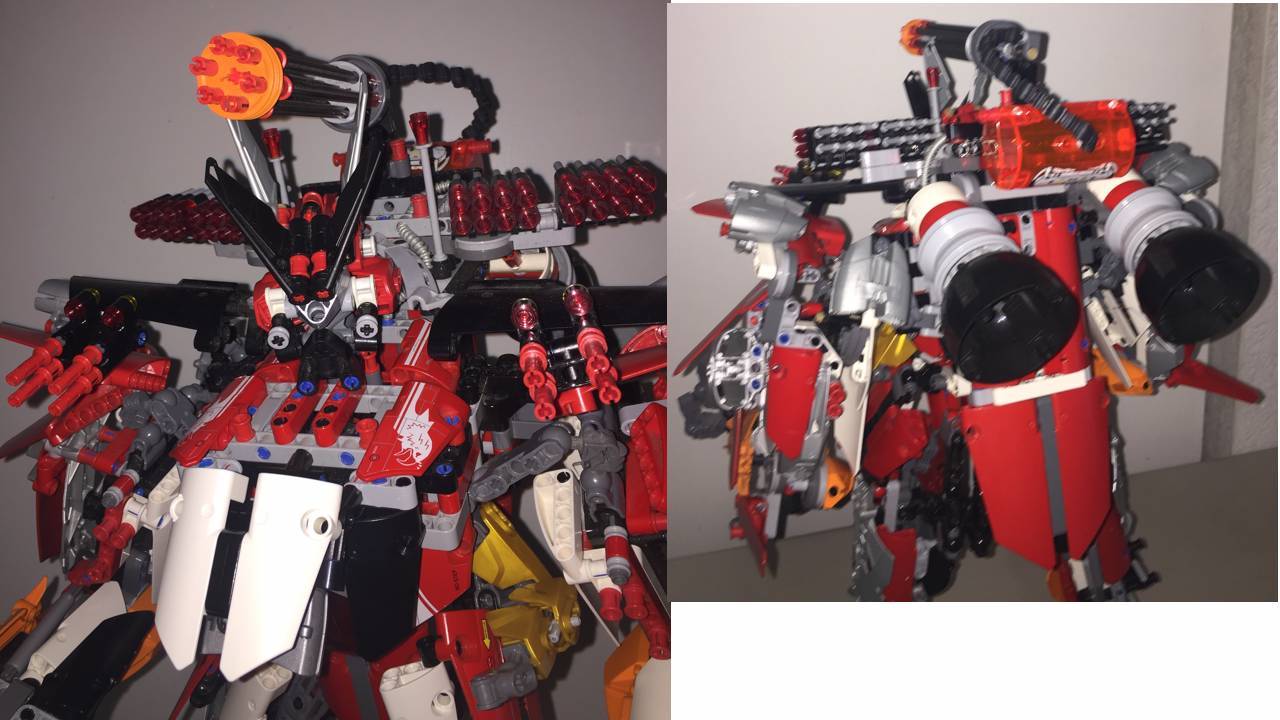 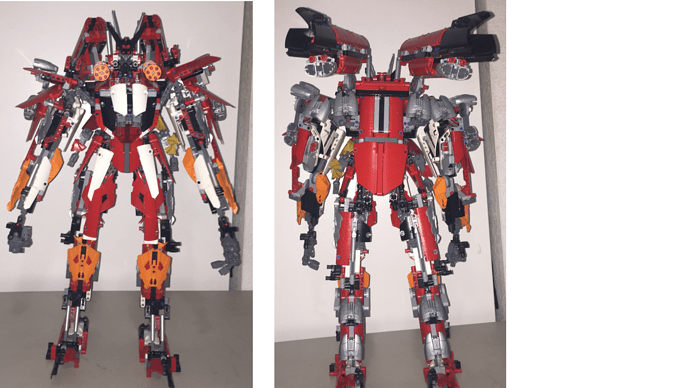 (The Star Sailor Power Pack is equipped with shoulder gatling guns and wings to allow evasive maneuvers in space and air.) 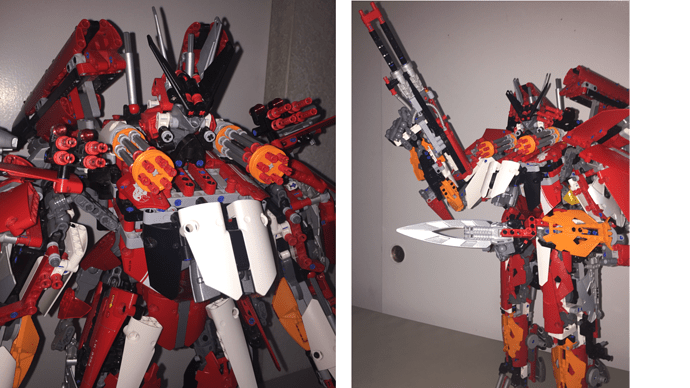 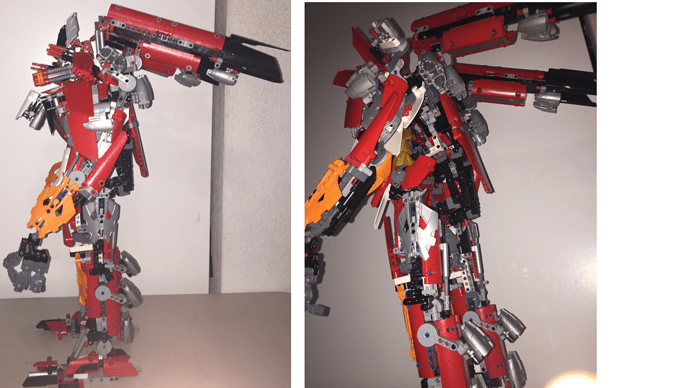 The Shinobu War Mech was designed and created by Ana after she and her team witnessed Cayde’s Jupiter Mech slaughtering insurgents and controlling every battlefield he entered. Ana was able to replicate a lot of the designs from Cayde’s Jupiter mech because they were able to hack Cayde’s mech and steal some of the files before they were shut out again by Jupiter’s A.I… The Shinobu War mech however is piloted by Jack (The leader of Ana’s team) and Dilpreet (Jack’s second in command and Ana’s sister). The mech is equipped with an A.I. to help the pilots navigate the mech’s complex systems. The mech has only a side arm blaster, retractable shoulder missiles, and an energy blade that also spins at high frequency to shred its enemies and can act as a shield. The Shinobu War mech originally had a bigger arsenal but I got rid of most of it (i don’t even know why i just got rid of it). 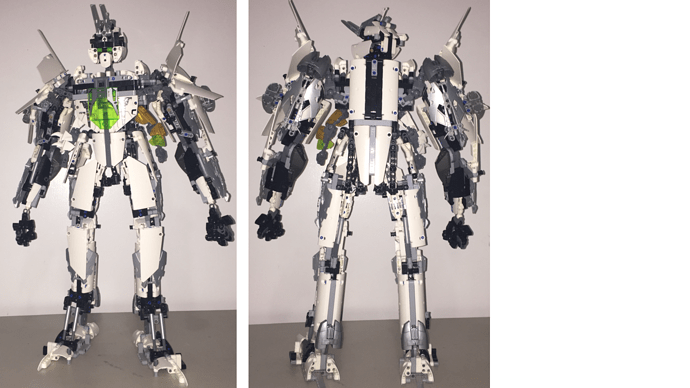 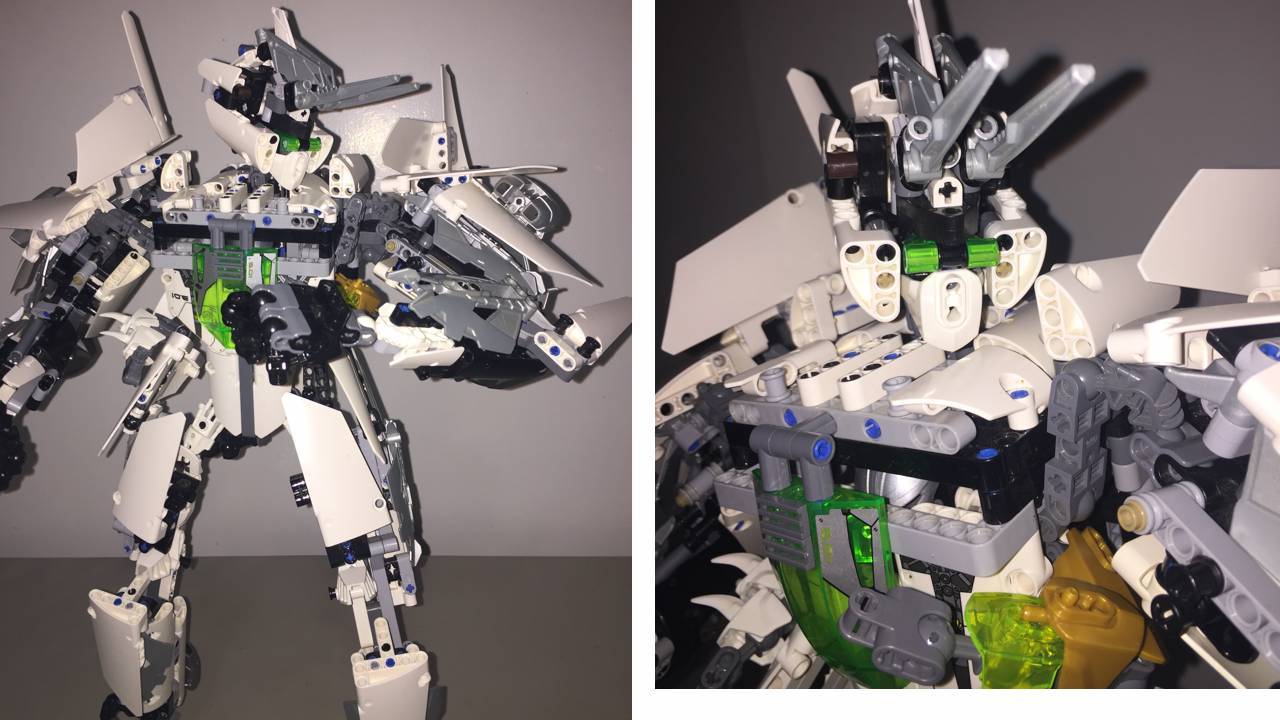 Shinobu Pose.jpg1280×720 107 KB
(All of Shinobu’s weaponry is stored inside the suit and can retract out for use kind of like: Optimus Prime and his blasters, Blackout and his rotator blades, and Starscream’s hand saw.) 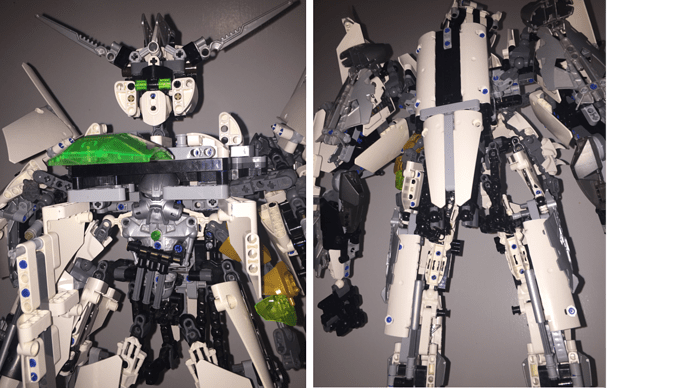 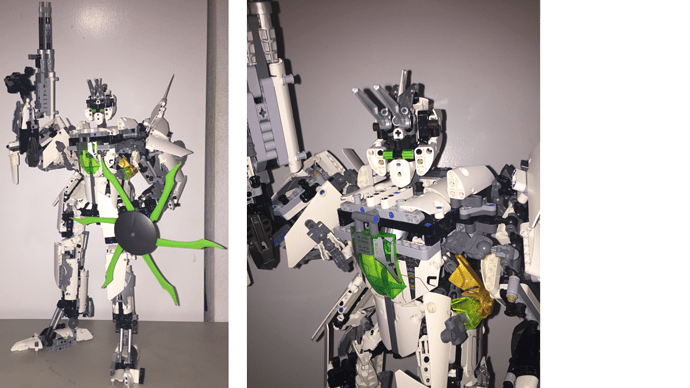 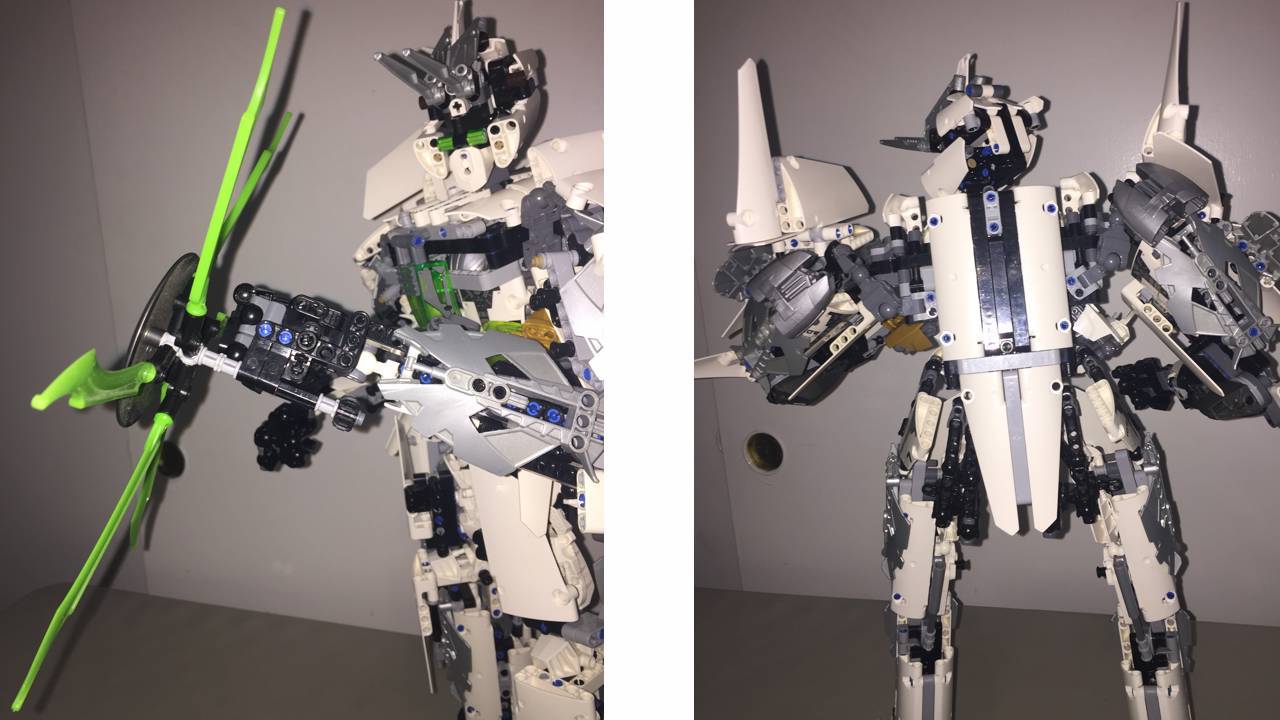 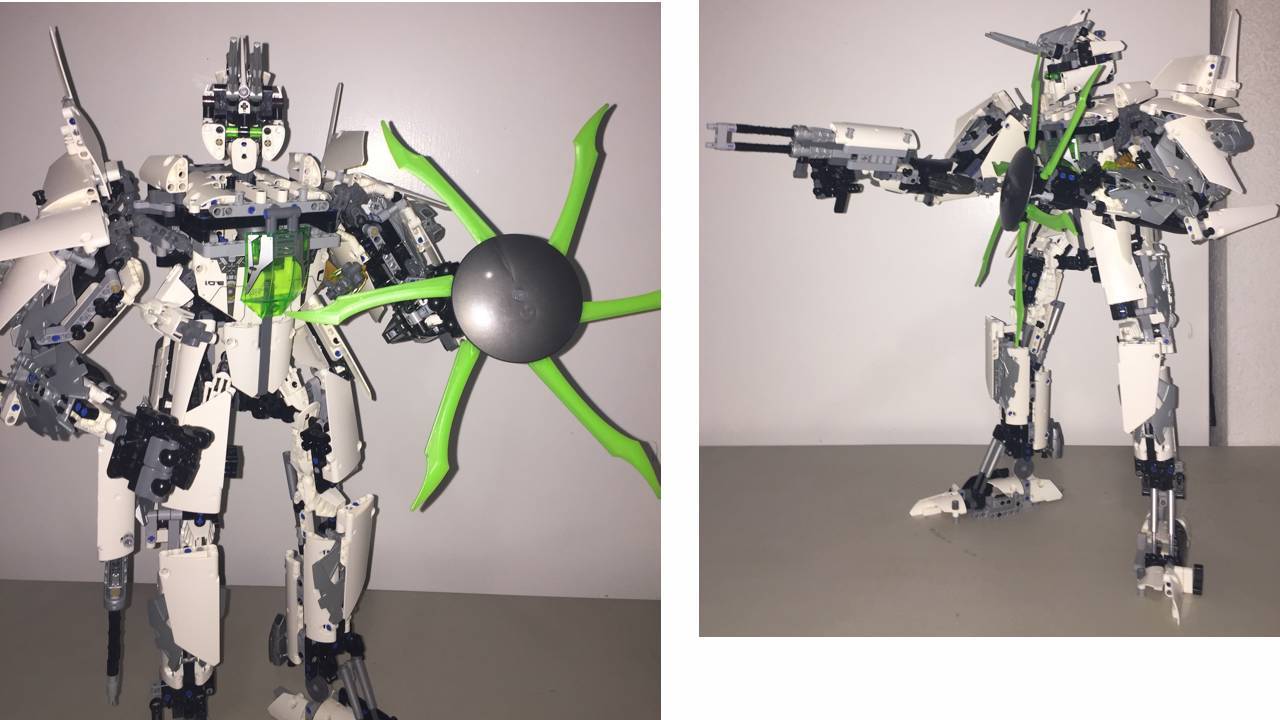 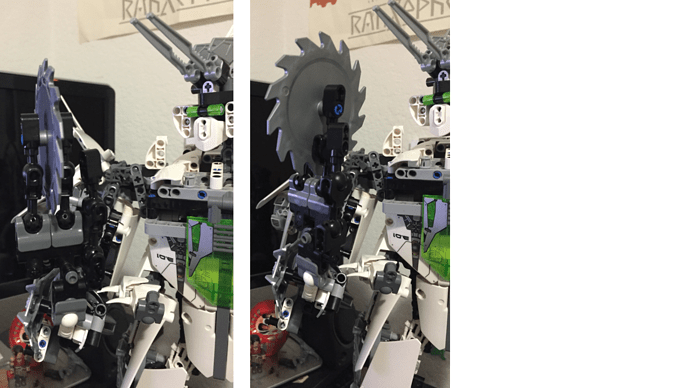 (This is an edition of the suit i forgot to mention earlier but has existed in earlier generation exo suits. This mechs had can form a saw like StarScream from the bayformer movies. However this mech has about six in each arm and can throw them at enemies like shuriken)

And that’s it for the Jupiter and Shinobu War Mech. If you have questions feel free to ask, I’m always happy to reply.

Also here’s some pictures of my 3rd generation exo suits that were made back in 2011. 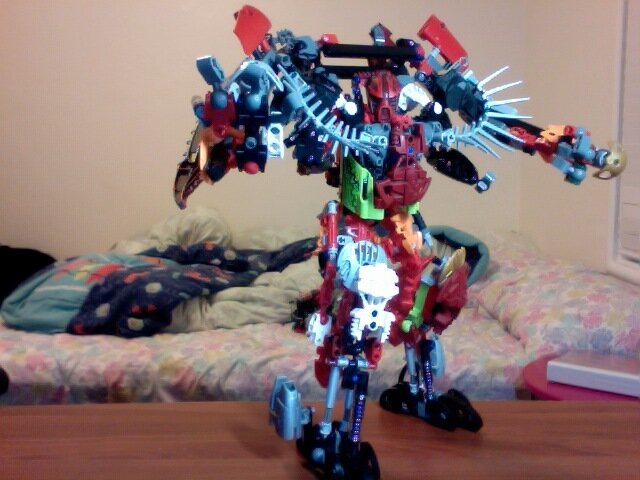 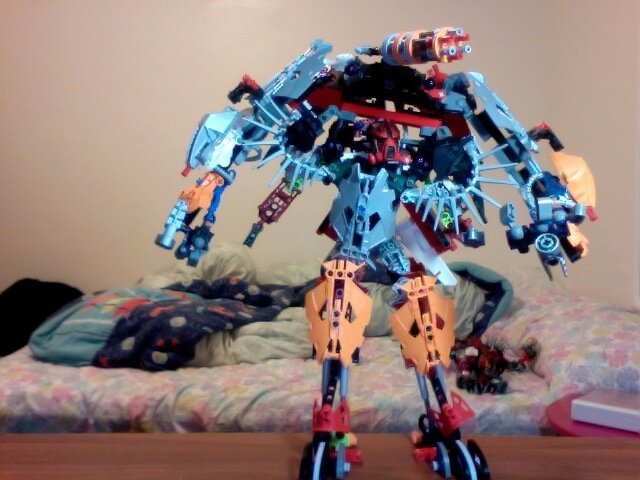 These MOCs are huge! But I have a question. How stable is this?

Pretty dang good! The only downside is that the textures clash in some places; obviously, though, these are huge MOCs and thus I can understand limitations in pieces.

Does a figure actually fit inside?

@Blue_Robots Yeah lol, I wanted them to be big enough to “fight” other people’s mocs. There aren’t any pieces that are loose, shake, or fall off on this moc. I had to modify the head because the original head was not as stable as I’d like, that’s why i the design is 60% my own. But if you meant whether or not this moc shook while it was standing or posing, then it’s kind of complicated. In it’s normal form and tyrant form it’s really stable and can hold a pose quite well. However once you put on the star sailor form then it becomes less stable quite notably and i have to move the arms slightly forward to counter the weight. And the pilot is really stable inside the mech and is connected on they’re back and legs.

@ReeseEH Yup, but all the pilots uses a inika torso. The pilots also have to strip all their gear in order to wear the suit so that’s also one of the down sides. Some of the photos above show the pilots in and out of the mech suits. And you can also see the pilots hands hang out the sides of the mech suit.

@Jayfa Thanks! Wow, I never thought of it that way, but now it’s kind of cooler when i think of it. Back when i didn’t know about bricklink (around 2012-13) I actually bought 3 axalara sets for the vehicle panels to make my G6 mech suits. And the tail of the Axalara (the one with the extending visorak blades or whatever) was used as a power pack for my old self mocs exo suit (back then i had 6 exo suits cause they were cheaper to make).

@BBricks
Hope this is what you meant, I only have a 12 inch ruler so you might have to imagine the other 10-12 inches. However if you want to see a scale of the pilot compared to the suit, there should be a picture in the topic about it. Lmk what you meant. 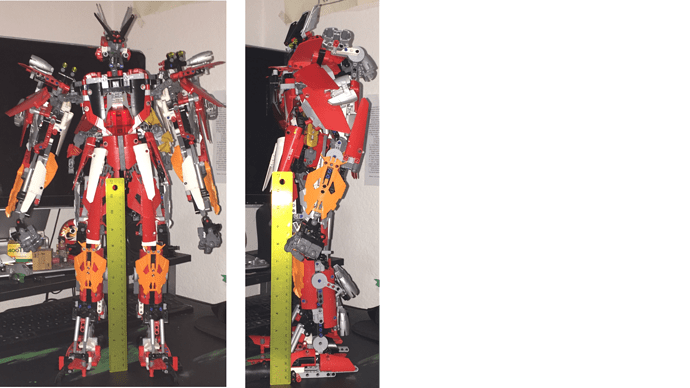 @RogueToa Thanks! They’re pretty stable, the first reply should answer that unless those aren’t the answers you’re looking for. However, here’s so more info: The legs can move forward 90 degrees to the terrain it’s standing on and can bend 90 degrees. The legs can spread apart to a 60 degree angle. The legs can move backward 30 degrees.The moc can stand straight basically forever and is even more stable than the pilot.

but yeah man these look sick

Can we see a picture for scale?

Great job!!! How stable are they and how articulated are there legs