In the Lore of BioTube (the Youtube channel) Kain is a being whose strangest trait is his autonomy compared to the singular purpose of his brethren who are programmed to act as police officers. Because of this he was sent away, first to a Planet known as V3KT-097, a Planet of which high priority criminals are kept, as Makuta was aware of other worlds during his travels with Mata Nui. Kain Spent well over 20 years on that planet and his robotic form began to adapt into a more human form and in a strange turn of events he was taken from the planet by a strange being known as Excelsius, a Tyrant looking for slaves, for his newly opened mine, Kain would spend another 10 years in the mine before being located by Akima, an adopted prince of the king who was tossed away from a dream. After Akima and Kain break free of the mine Akima loses his arms during a fight with a pyromaniac known as the Fire Lord. Kain was left with no other option but to escape. Another Year passed, Skirmishes erupted in the citadel and Kain was noticed by the Retired Mask Maker, Vakama, who has taken up management of the Multiverse under the orders of Mata Nui. Vakama approached the more human Vahki with a chance for a new life and Kain agreed, Now Kain watches the Labyrinth of Shadows and within its complex a Tomb, The Tomb of the Dark Warrior Dagra. 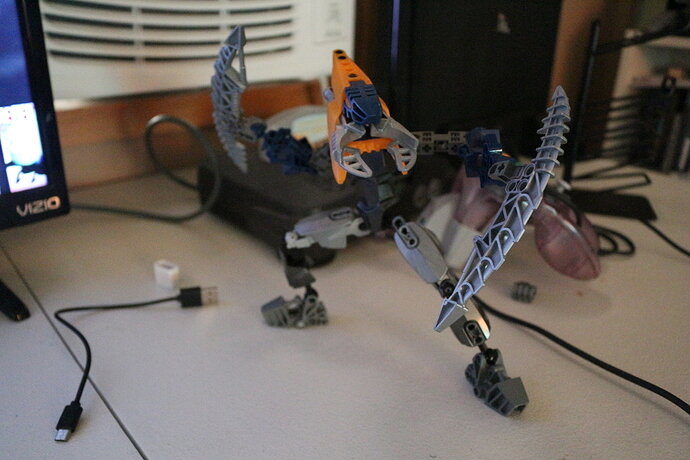 For this Redesign, i had to forgo the traditional arms, the Lack of Movement Made the original extremely difficult to animate so instead i re-purposed the Legs and used them as the arms while the legs (aside from the feet) have been replaced with CCBS, now i could have used the 2016 sets torso build to replicate the function but this just felt easier, as far as the weapons go, they were left alone. overall the Vahi were pretty easy to update for CCBS and keep the possibility without crippling levels of complexity, regardless i think this will be a fun set to animate in the future.

Interesting! The arms have lost a bit of their uniqueness (and don’t really fit too well with the CCBS parts in the rest of the model. Also, have you got any other CCBS parts to clean up the color blocking?

Got any of the black or white Vahki parts? They might be easier to find CCBS shells for.

Could you take more pictures on a different background? I can’t see it in detail very well

An outright Light box test may be considered

Half the post is backstory which I’ll cover in a minute. For now, let’s look at the actual MOC. The specifically redesigned legs are… Well, really simplistic. They’re just CCBS bone with armour slappd on. Also, you used light blueish grey on the upper limbs, which is pretty much nowhere else on the entire build. Dark blueish grey would have meshed much better.

The arms are… Hey, that’s the legs! It’s the exact same two-piece design but as the arms.

The torso is a CCBS torso with a CCBS torso armour plate on top. I’m really curious as to how you attached the head, but uh, you didn’t show us. The angle hides the neck entirely.

It’s difficult to tell if the story was written by you or if it was ported over from someone else’s concept and the character adapted to fit the world. I’m going to be assuming it’s entirely yours.

The punctuation and capitalization is bizarre. Words like Spent and The are capitalized when their placement does not demand it, and while some words are capitalized for emphasis, others that should be to fit what has already been are, in fact, not. Is it possible to confuse oneself in the middle of your own sentence? I won’t delve into the basic concept of the lengthy backstory but I will say, if you’re trying to be accurate to G1’s terminology, I’m pretty sure “Mask Maker” is specifically a G2 term.

Overall your Bordakh is definitely a redesign, but I’d be hard pressed to call it an improvement. Padding it with overly complex backstory doesn’t help much, as most readers (including myself) skip that and go straight for the pictures. I would recommend looking at some of the more unique redesigns builders have put out in recent history and try making something a little more complex - if you’re willing to temporarily sacrifice a few pieces from sets, that is.

I’m pretty sure “Mask Maker” is specifically a G2 term.

Pretty sure Vakama was a mask maker. 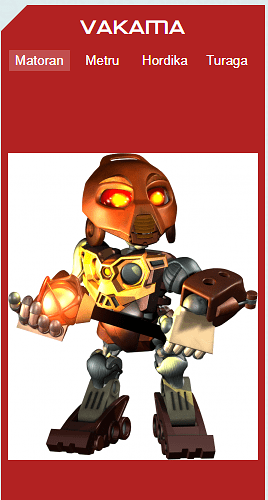 vakama matoran mask maker.png268×744 108 KB
Yeah, Biosector says he had the occupation as mask maker when he was a matoran
2 Likes