Kamen Rider (仮面ライダー Kamen Raidā?, Masked Rider) is a tokusatsu superhero television series and weekly science fiction manga created by manga artist Shotaro Ishinomori. It debuted on television on April 3, 1971, and ran until February 10, 1973, airing on the Mainichi Broadcasting System and NET TV (now TV Asahi). The manga adaptation was also featured in Shōnen Magazine around the same period. The series has evolved into a franchise with many subsequent annual iterations.

The Kamen Rider Series (仮面ライダーシリーズ Kamen Raidā Shirīzu?, translated as Masked Rider Series) is a metaseries of manga and tokusatsu television programs and films created by manga artist Shotaro Ishinomori. The various Kamen Rider media generally feature a motorcycle-riding superhero with an insect motif who fights supervillains often referred to as kaijin (怪人?). The franchise began in 1971 with the Kamen Rider television series which followed college student Takeshi Hongo and his quest to defeat the world-conquering Shocker organization. Over the years, the popularity of the franchise has grown and the original series has spawned many television and theatrical sequels, and launched the “Second Kaiju Boom” or “Henshin Boom” on Japanese television in the early 1970s, greatly impacting the superhero and action-adventure genre in Japan.[1]

Masked Rider is an American adaptation of the Japanese television series Kamen Rider Black RX, the ninth in a line of series in the popular Kamen Rider Series franchise. It was produced by Saban and aired on FOX part of the Fox Kids program block from September 16, 1995 to August 31, 1996 and then in syndication from September 9, 1996 to September 1997. On May 7, 2010 the copyright for Masked Rider was transferred from BVS International to SCG Power Rangers.

Kamen Rider: Dragon Knight is the Daytime Emmy Award-winning American adaptation of the Japanese tokusatsu series Kamen Rider Ryuki, the twelfth installment of the Kamen Rider Series. It was brought to television by Steve and Michael Wang and produced by Jimmy Sprague through Adness Entertainment. The series had a sneak premiere on 13 December 2008 and began official broadcasting on 3 January 2009 then continued throughout the year. Adness chose to adapt Ryuki over the other Heisei Rider shows as it has a large number of characters (Ryuki had 13 Riders in total) as well as a female Rider. It is also the first tokusatsu adaptation of a Kamen Rider Series since Saban’s Masked Rider, which was adapted from Kamen Rider Black RX. The show first aired in the United States on The CW Television Network during its CW4Kids programming block. Statements by director Steve Wang and lead Stephen Lunsford show that The CW had dropped Dragon Knight at the end of the year before its final two episodes aired in the US. The final episodes were uploaded to the 4Kids TV website on 18 December 2009. In 2012, all of the episodes were removed from the 4Kids TV website. 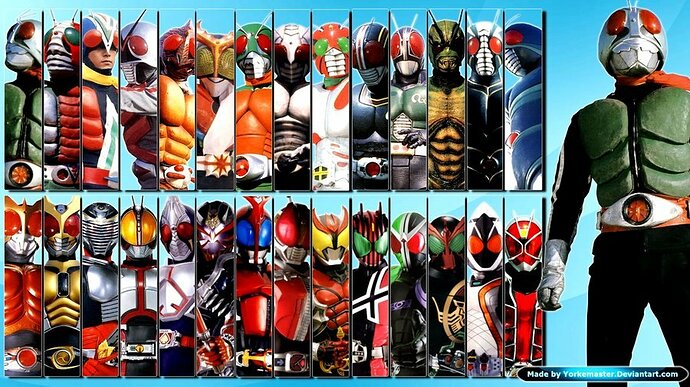 Uh, Gaim’s going pretty well, though I haven’t seen past like, 28 yet.

Fourze was fun, even though I know a lot of people didn’t like it.

W even more so.

Decade was meh, for me.

I didn’t care for Kiva

And then Blade was okay, if a bit unfocused, and outside movies, I haven’t seen much anything prior.

Back when I was young, the only Kamen Rider I knew of was Black RX. I only had the first two episodes on VHS and I watched the heck out of that for two years. Opening was so catchy.

Kamen Rider 555 was pretty much the only one I’ve seen all the way to the end.

Ah yes Kamen Rider. Been a fan of it since I found out about it during…Den-O I want to say. Decade is one of my favorite series personally, but all of them are good for different reasons.

Alright guys, We need to steer into a topic…

Put the brakes on introductions…

And talk about, Kamen Rider Drive!

Not gonna even lie, that is a terrible name for a Rider.

All I’ll be able to think about is W. Or all the various Drivers throughout the years.

Like, on its own, it’s fine, but with history and knowledge of other KR Series, yeah, kinda sucks.

then you’ll be happy to know that the official name for his belt is the Drive Driver.

So the Trideron is going to pull a Tumbler and turn into a proper motorcycle when it gets destroyed, right?

It flips over, and turns into a high speed chase car! With no front wheels!

Or the Go-Busters Red Mech/Car, That could work. Possibly?

So, am I the only one who gets KR Music stuck in his head, and now finds himself with an entire playlist of it?

Welcome to me life.

Because Life is Showtime, and Anything goes.

I swear to got, OOO driver n Ebay, around 30 medals, OOO’s Blade and Driver… Been Watching it for so long, Today’s the last day…

IT WENT FOR $61 ASD, WITH ONLY 50 SHIPPING AND I WAS AWAY DURING IT’S ENDING.

Aight, so guys, I had this thought.

What if, Saban took a page from Toei, with their Super Hero Taisen movies, and brought KR and PR closer together, as well.

Try once again at a Kamen Rider remake, take anything from the Hesei Era, maybe even the Neo Heisei! And make our Third American Rider series follow the story…

of a former Pwer Ranger. Take a ranger from a team who lost their powers forever, or one who’s had their role taken, and do something with that!

Adam, having been replaced by Carlos in Turbo, would be a good candidate.

As would Rocky, having been replaced by Justin far earlier.

Then, we could have stories where we incorporate the past villain factions, by drawing similar themes between stock footages.

Say if we took the footage from like…Blade, where the monsters are Demons. Connect them maybe tothe Demons from Lightspeed Rescue, or the other assorted forces of Darkness that are earth native, like Morticon and his crew.

I dunno just something to think about, if we’d maybe wanna see another, better attempt at KR in the 'States.

I’ve actually been planning a series of stories, or potentially fan films now that I’m in college and have access to plenty of free labor in the form of classmates, that would be adaptations of the rider series.

I even made a list of all the riders, up to Fourze as that was the current series when I did the list, and created adaptation names for them.

Also Saban trademarked Power Rider last year in television. so that could potentially be a second attempt at Masked Rider. Dragon Knight doesn’t count because that was adness, not saban.

As for having a Power Ranger Alum act as a Rider…not too keen on that idea personally, but I could see them in a supporting role.

As for having a Power Ranger Alum act as a Rider…not too keen on that idea personally, but I could see them in a supporting role.

Yeah, I can understand the sentiment.

All I’m really asking for/wanting is a continuity/shared universe between the two.

Well, to be fair, the pilot of Masked Rider actually rendered A Friend in Need noncanon. So they actually aren’t connected.

I know, that’s why it’d be easy to make a new continuity and integration.

What I think they should have done is adapt Decade, using the Shinkenger crossover footage to help set it up, this would be done during the Super Samurai run, and from there, go backwards from Kamen Rider and use Decade to introduce the other Riders.