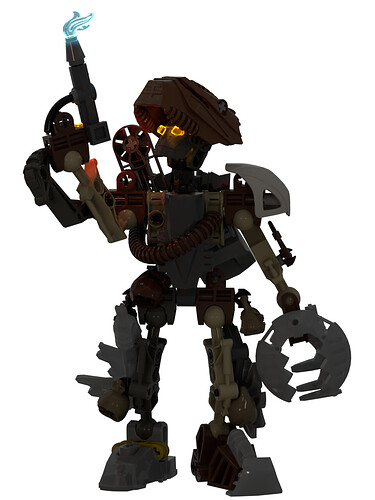 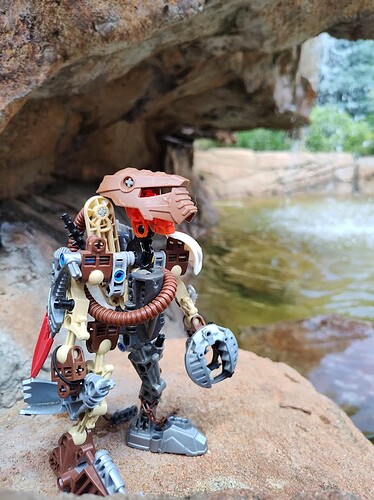 Long, long ago, Kanii worked as a sculptor in Po-Metru. Unlike his peers, he really wasn’t very good at it. Most of his works ended up breaking, or else they just looked awful. However, he was quite good at forging tools and tinkering with devices. After maybe 500 years of sculpting, Kanii threw in the towel and instead opened up a tool shop. “Kanii’s Warehouse” did very good business. The Po-Matoran’s handiwork was renowned. Word soon spread through the rest of Metru Nui, and pretty soon Kanii was selling carving tools, telescopes, forging tools, pencils & stationery, and vehicle parts.

All was well for a while. But Kanii had a problem. He was a bit of a kleptomaniac. Often, a spare Kanoka would vanish from a Ta-Matoran’s forge, or a Po-Matoran’s favorite chisel would disappear. No one thought much of it, until a Ko-Matoran realized how suspiciously similar items appeared on Kanii’s shelves at the same time other Matoran’s tools went missing. The jig was up, and the Vahki were sent to apprehend the Po-Matoran thief. But when the Zadakh broke down the doors of Kanii’s Warehouse, they found it completely deserted - along with its stock. Kanii was already sailing away on a boat he “borrowed” from a Ga-Metru dock.

Kanii landed on the shores of the Northern Continent, where he began his new life. Using his sizeable fortune of Widgets, he bought a heavy-duty wagon and fitted it with plenty of hidden compartments. The stock from Kanii’s Warehouse was loaded into barrels, chests, and shelves in the wagon. Lastly, he found and tamed a Dikapi to pull it. With that, “Wanderer’s Wares” was officially open. Kanii lived as a wandering trader from then on. He’d travel to a new town or village, set up shop for a few days, then move on. The night he left, he’d sneak through the town and take anything of value that he could. Before the townsfolk woke up, he’d be long gone. 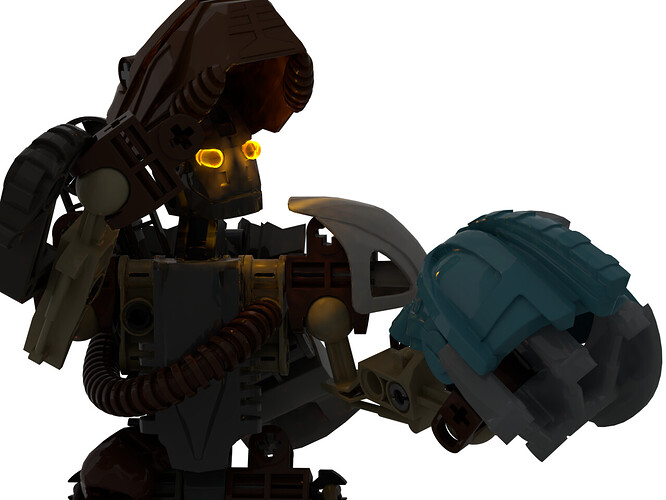 Two things happened to Kanii over time. Firstly, a sense of compassion for the poor and downtrodden began to grow in his soul. He knew what it was like to be practically destitute and on the outskirts of society. Stealing from others like him (humble workers, builders, and farmers) just didn’t feel right. Since that epiphany, he has only robbed the wealthy and powerful. Secondly, a fascination with Kanohi masks began to grow in his mind. Despite not being able to use masks himself, he learned pretty much everything there was to know about them: how to forge them, what kinds there were, the sorts of powers they had, et cetera. Even better, he figured out how to use them. It took maybe five thousand years, but he constructed a device that would allow him to use a Kanohi mask. After wiring it to his back, he finally had a way to do what other Matoran could only dream of. He was only able to use Noble masks, but even still, it was a great advantage. 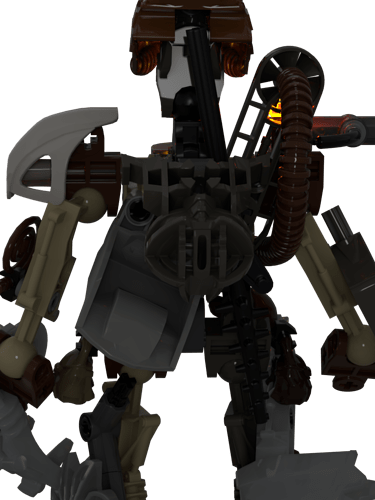 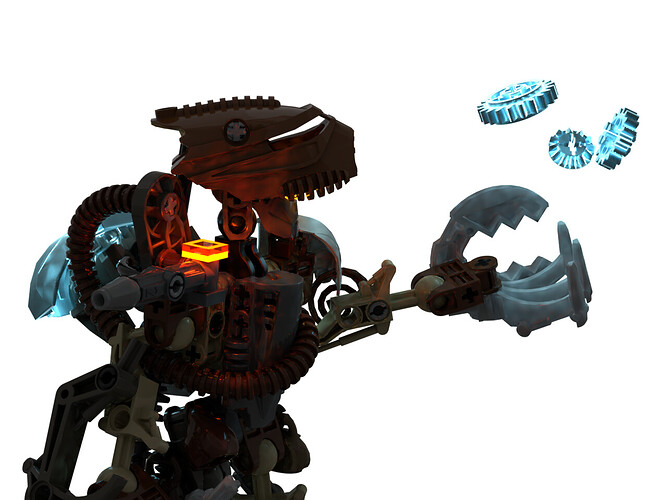 Kanii kept up his wandering salesman charade well into Spherus Magna. Unfortunately, pretty much everyone in the big cities was wise to his trickery. If he wanted new customers, he had to travel to increasingly remote settlements in deserts, jungles, and mountains. Still, the Reformation brought with it many opportunities. For one, Kanii encountered a fellow Kanohi-obsessed thief by the name of Voldoka. Vold was a Toa Hordika of Fire, and the two got along quite well. Much more importantly, though, Kanii found love. It happened late one night, while Kanii was sneaking through a rich Jungle Agori’s home. There, he quite literally ran into a Stone Tribe Agori. It was love at first sight. Apparently, the Agori was there for the same reason Kanii was - to heist a valuable sculpture that the homeowner had recently purchased. The Agori, who Kanii learned was named Felos, decided to help the Matoran steal the sculpture. After that, the two were positively smitten with eachother. Over time, the two thieves became partners in more than just crime.

On one heist, Kanii braved the elements and trekked to the headquarters of the Hunters’ Guild, located on the frosty continent of Tundris Gaia. There, he set up shop. The bounty hunters there were always in need of new weapons and equipment, and so Kanii made some good sales. He also made a shocking discovery - not only was the Kanohi Enkhi, Legendary Mask of Knowledge exist, but it was in the possession of a robot working for the Guild! As the sun set, Kanii and his wagon departed, but when night fell, the Po-Matoran snuck back in. First, he’d visit the Guild’s archives and snag some of the masks he heard were kept there, and then… then he’d take that Legendary Kanohi for himself.

Unfortunately, Kanii was caught. He was sentenced to ten years and all his belongings were confiscated. While imprisoned, the robot Mecn visited him. Kanii was able to teach him how to use his powerful Kanohi mask (at least, to a degree) and in turn Mecn got a few years knocked off Kanii’s sentence. It wasn’t long before the Matoran was finally free and able to reconnect with his lover. 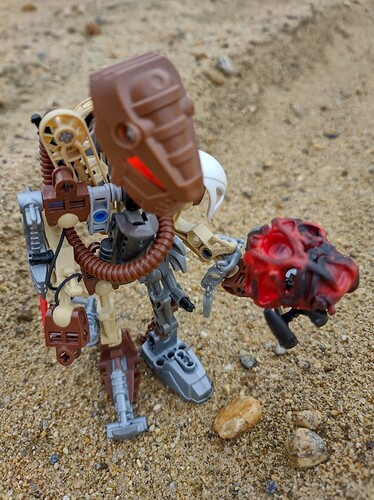 Following that experience, Kanii decided to turn over a new leaf. He contacted Voldoka, and with some startup funds from Felos, the two opened a pawn shop in the metropolis of New Atero. At first business was slow, but as the two got more and more stock, their patronage boomed. “K & V’s Emporium” quickly became the best place to buy masks, tools, appliances, and really anything else. Just… don’t ask where they got it from. Seriously. 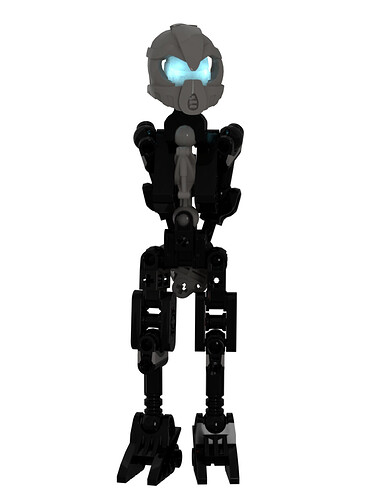 Felos comes from generational wealth. His parents, and their parents before them, operated mining and shipping companies out of Roxtus. Felos was not one for business, much to the disappointment of his mother. His father, however, encouraged him to explore his other passions, which turned out to be art. Since he was young, Felos made quite a name for himself as both an artist and art critic. Some of his best pieces were made in protest of the Core War and in mourning of the disastrous Shattering.

As time went on, and Bara Magna entered into a sort of stasis, Felos started his own private art collection. Unfortunately for him, most artists with works worth collecting charged an arm, a leg, and a kidney for their art. Felos may have been wealthy, but his parents would certainly not approve of him wasting his allowance on frivolities. Instead of buying art, then, Felos decided he’d steal it. After a few thousand years of practice, the Agori got very good at it. He had an entire stash of excellent art pieces hidden in a secret vault, and no one was able to trace anything back to him.

After the Reformation, Felos bought a penthouse in New Atero. There, he displayed many of his legally obtained art pieces. It was also nice to finally get out of Roxtus where his parents kept pestering him. He could fully focus on his passions: making art, critiquing art, and stealing art. 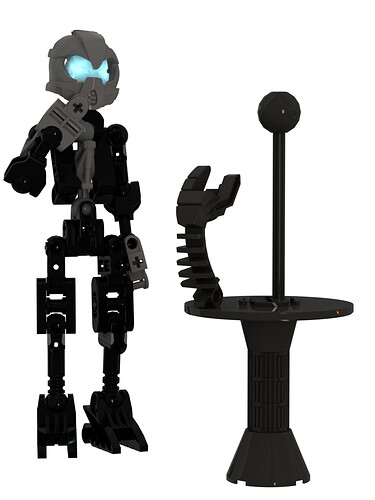 One heist would change things forever. Felos was creeping through a Jungle Tribe Agori’s treehouse mansion in search of a very expensive painting. He expected to be along, so imagine his surprise when he collided with a Po-Matoran intent on stealing the same work. For a Po-Matoran, he was remarkably attractive. Felos and Kanii soon became friends, and then quickly more than friends. Neither of Felos’ parents approved of the relationship, and suggested he instead date someone of higher societal standing. But Felos loved the poor street rat, and nothing they could say would change that. 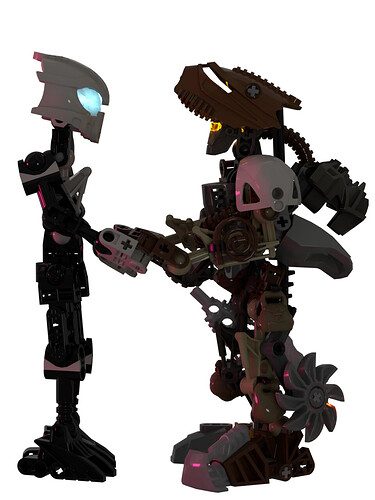 So if Felos is from the rock tribe then wouldn’t that make him a skrall or a bone hunter?

The Rock tribe does have Agori members, Atakus is an example. The Bone Hunters are an independent group, derivative of the Rock Tribe somewhere in the distant past, although they have been shown as allies in the story

only able to use Noble

Man I’ve alway thought about doing something like this, cool to see others with the same idea, both these fellas look really cool!

Come on sell me a bucket of pufferfish all ready!

Ooh very nice! Mocs look good, and the lore is great! I like the builds, cool job