Khoto is a lone toa worrier protecting his land of fire, he distance himself from others so they won’t get hurt by his power that he contains.

When there is trouble in a village on his land he trys to lead the attacker away from the village in case if he acquires to use his destructive power.

When he is in his defensive mode he usually uses his right hand to lift his weapon Solar Spire.
If his opponents seem stronger for him to finish the battle quicker he uses both hands to grab his weapon for stronger swings.

The cape that he wears on his left shoulder is to cover his left arm with is the more dangerous side of Khoto, he has it contained with a glowing chain connecting to his side and upper arm to keep his power locked. He will and shall ONLY use if necessary in a difficult battle. 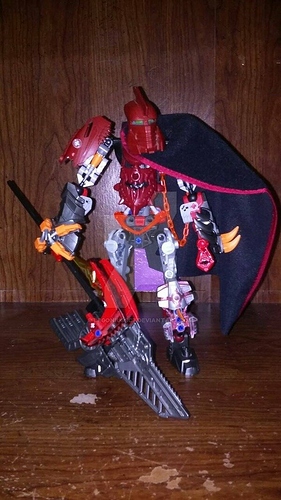 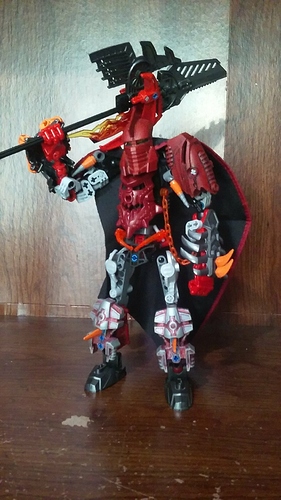 A bit hard to tell but the fact that he has three faces all in the same color on him is a bit jarring. I mean he’s got the Hau for his face, but a mutated Huna for a shoulder and the Pyrox head on his chest…

Not bad, but the three faces thing is a bit unsettling.

Seems neat, just I feel it needs more armor, detail, and character, Other than that it’s good!