Haven't been on here in a couple months, mainly because I was busy. This MOC is a few months old and it was built as I wanted a dark counterpart to my angel moc. Honestly, I feel like it needs something as she is kind of basic. By the way, it's really too bad that Bionicle is dead. [image] So a new threat arose in Spherus Magna 1000 years after the reformation. Ataa's origins are a complete mystery as all of the Makuta other than Miserix are deceased. Ataa's tattered wings do give a clue to her origins though. Her powers however are much stronger than Teridax's and she is far more cunning. [image] So I based this MOC mainly off of LadyDevimon with a few features borrowed from Nivawk. As a comparison, here is Anahera and Ataa together. [image]

Honestly, I wasn’t really satisfied with her previous state so I decided to give her a makeover. Female MOCs are very hard to make perfect, and I’m not going to lie, I had some bumps in the road building her. That and I had limited time to do it with my new work schedule. 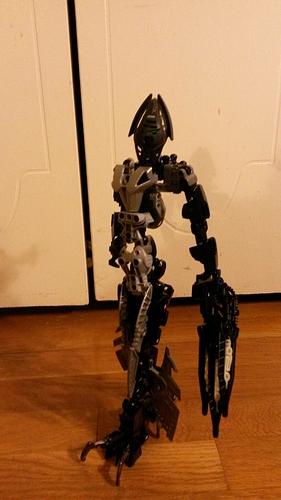 So this is the new revamped Lady Ataa. She’s a little on the skinny side, but I feel like that brings out more of the evil in her. The reason why I did this was because my previous attempt was not capable of many of the feminine poses that one would expect from a female MOC. Also, I felt like the gear function in the waist was a bit superfluous. 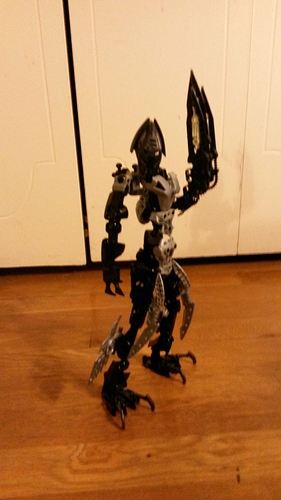 As stated in the link, Ataa is meant to be a counterpart to the Angel of Light MOC that I created a couple months back. Unlike the Angel of Light, however, I decided to go a different route and feminize her a bit more. The Nuva chest gives her a nice bust without going too overboard. That was the easy part. The hard part… 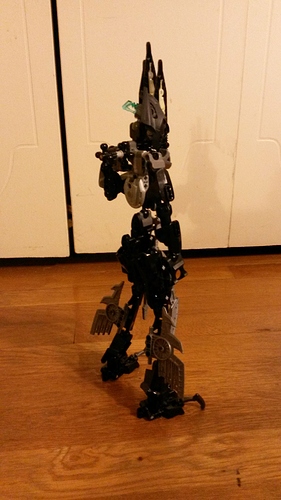 was the rear. I wanted it to look voluptuous while at the same time keeping with the proportions of the rest of the body. That was the challenge and it took me many tries to finally get a result that I am satisfied with. When creating female MOCs, I realized that a bit more subtlety is the way to go. Here is another angle at it. 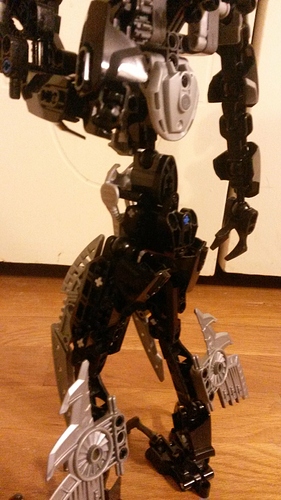 As for her character traits, I also decided to make her a more tragic figure, being that she is a fallen angel.

Here are some action poses with Vakama. 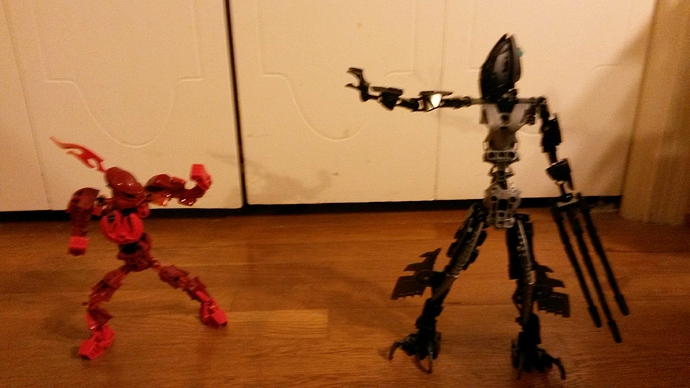 Of course, he got quickly crushed. 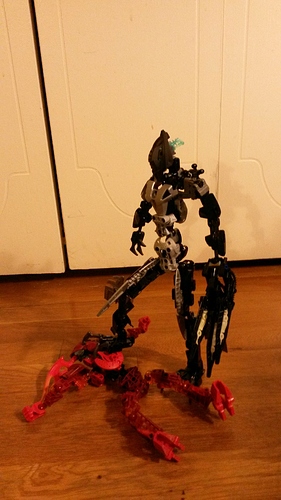 Any comments, praise, or criticism is welcome. What I don’t want to read is how she is “sexualized” because I don’t think I overdid it here. Note that there are some real life females with this type of body structure.

She’s a little on the skinny side, but I feel like that brings out more of the evil in her.

because good Makuta have curves.

I’d recommend covering the frame more using larger shells, and g2 masks on the shoulders and possibly the hips, as well the back is pretty open which detracts from the appearance, and this is just a personal preference but I like it when Makuta have hoses worked into the design. maybe consider adding a highlight to make it pop. My biggest complaint is the weapon, it looks like a club of knives, it doesn’t really seem practical.

Yeah, I agree that the weapon does need some revising. I do like the idea of tubes, it sort of gives her a battle damaged look, like she’s on some sort of life support. I do agree that she needs to be thickened up a bit. Thanks.

I do like the idea of tubes, it sort of gives her a battle damaged look, like she’s on some sort of life support.

Huh, I say that because Makuta are gaseous, and hoses convey that, but regardless of the reasoning, hoses would look cool.

What I don’t want to read is how she is “sexualized” because I don’t think I overdid it here. Note that there are some real life females with this type of body structure.

I applaud you for not using Nuva shoulder pads or Rahkshi heads to make it more “feminine”, if you know what I’m getting at. Good use of a kraahkan, it gives her a crest that looks almost regal.

What could be worked on are her legs and arms. Her legs could be larger at the thighs to balance out her feet visually. Her arms seem a tad short, and I suggest adding some form of shoulder armor to accentuate a thin torso build. My opinion though, so take it with a grain of salt.

This might actually be my best looking MOC to date. 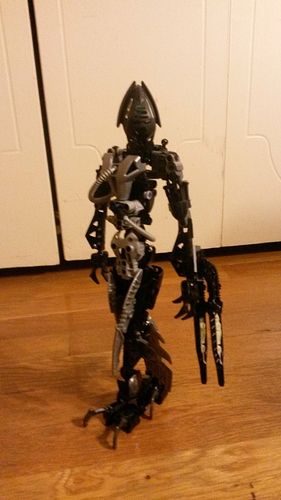 Saturdays, holidays, and days off are really the only times I can really MOC, so I had to use the time I had wisely. The first change I made were the arms. The CCBS construction I felt didn’t really fit with the rest of the MOC so I decided to replace those parts with old school Bionicle parts. They work pretty well and make the arms a lot less stubby. 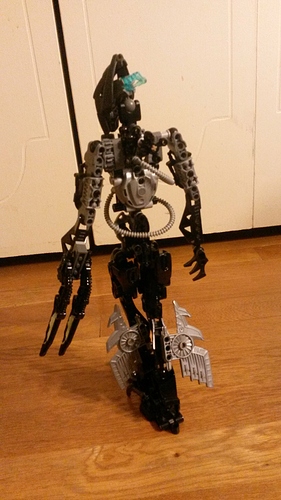 The second change I made was to the torso. I added two tubes to give the impression of an Antidermis gas transport/life support system. I also beefed up the torso a bit to cover up the spine.

I think I am pretty satisfied with the body as it is right now. If it weren’t for my busy schedule I think she would be done but as with a lot of good things, they take time to complete. The weapon I feel needs to be adjusted. I wanted to give her the switchblade function that Sidorak had but I don’t have the parts for that unfortunately.

Ever since I bulked her up, I am really loving the subtle curves a lot more.

Definitely improved,
But, the hoses aren’t integrated into the design at all, you need to make them look more like they’re actually part of the build, run them through parts of the build rather than just hanging off.

What’s a good way to run them through the parts?

Have one run through the side holes of the nuva chest and connect to the side(s depending on if you want to keep the asymmetricality of it) it’s kinda hard to see the places you can put them given the black, I think another hose could run through the waist up to the sides if you run it through the pin holes in the slizer foot? I think that’s the part you used, whatever it is there’s open pinholes. Can’t really tell you where to attach the ends, again because the black makes it hard to see the parts.

I have decided actually that the model doesn’t really need any external tubing. I think that it actually looks better without it to be honest and it adds some unnecessary details to the MOC. Thank you though for the suggestion. I’ll try to add a new pic as soon as possible. She’s almost there, all that needs working on is the weapon. But at least I got her body looking right FINALLY.

Alright. Finally got a chance to take some pictures. I am really satisfied with how the body looks. I am very happy that I got something to look feminine without the obnoxious Nuva shoulder armor and Rahkshi heads (she still has Nuva chest armor for a bust, but that’s more acceptable). The weapon, however, I feel still needs work. Tell me what you guys think. 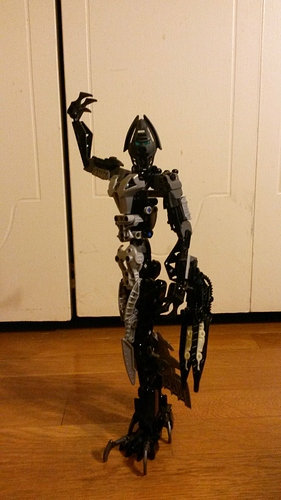 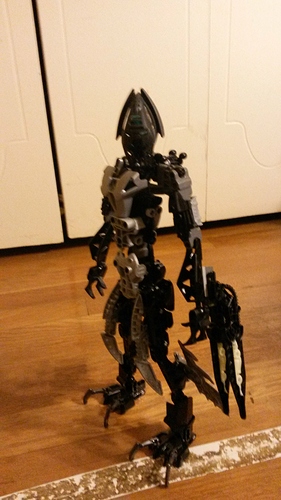 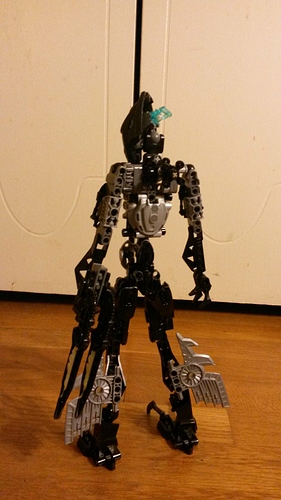