Ok, Lariska is a canon character, so I’ll spare you the long backstory

Just this much for those who have no idea about her as a character:

Lariska is one of the Shadowed One’s most trusted operatives, was responsible for making Nidhiki betray Metru Nui and was part of Brutaka’s team to find and free Makuta Miserix.
She is described as agile, favoring daggers and throwing knives as weapons. Her left arm was taken off and replaced by a mechanical one by the Shadowed One once for failure. 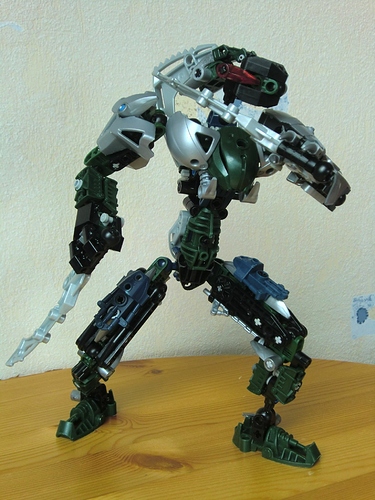 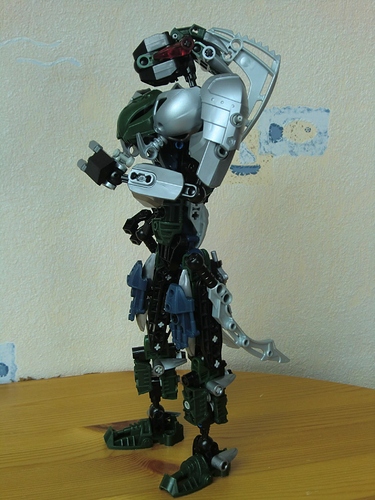 No, you’re not hallucinating. I actually did use CCBS parts on a MOC. And a G1 MOC at that. But before you call the ambulance - let me explain:
Well, the left arm is supposed to be a mechanical one - which doesn’t mean that it shouldn’t be armored. But if I had used “normal” parts and “normal” armor, the arm would just have had a different colour and a slightly different appearance.
Which doesn’t mean that this arm here looks totally mechanical or “out of place”. But it looks different from usual G1 stuff. How would a mechanical thing look that has been built by biomechanical beings? Well, for once CCBS was my answer. And I even have to admit that it fits in pretty well here … 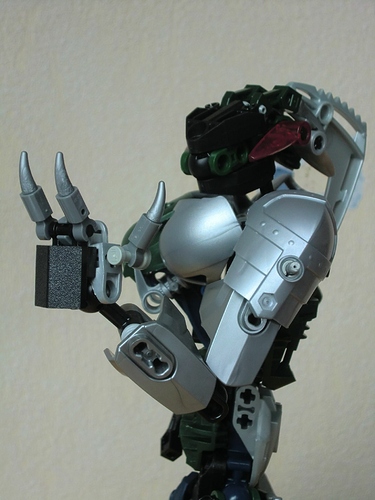 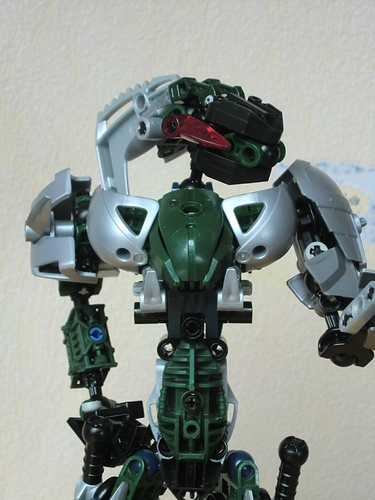 Oh, yeah, and I used broken parts to fasten that Knight’s Kingdom armor on there. Usually I don’t use broken parts and I most definitely would never break a part just so I can use it - but I had those pieces lying around - even got them broken from a garage sale to begin with - so why not use them?
The head captures the G1 Dark Hunter style well enough, I think, although I’m not fully satisfied with it. The build of it is also not perfect.
As to the chest - I wanted to use a Rahkshi head on a chest since forever and finally I did it! That Nuva armor there was just added to cover up the sides by the way. 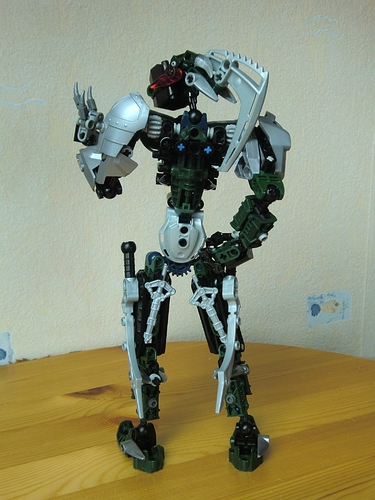 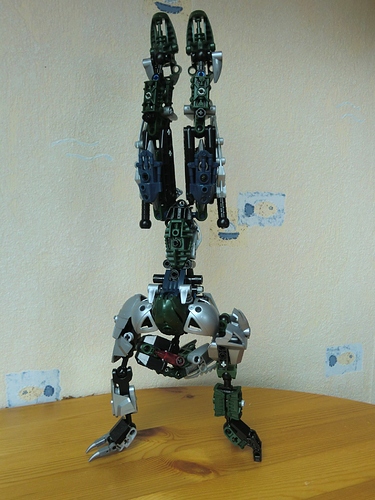 I think Lariska is also my first MOC that can store all of its weaponry. Those smaller blades are supposed to be throwing knives, the bigger ones are obviously her daggers - although they’re slightly on the large side.
That this MOC actually is able to do an unsupported handstand even surprised me to be honest. I’ll blame that on the CCBS arm since those parts were as good as never used and still have a lot of friction

I simply had to take this pic: 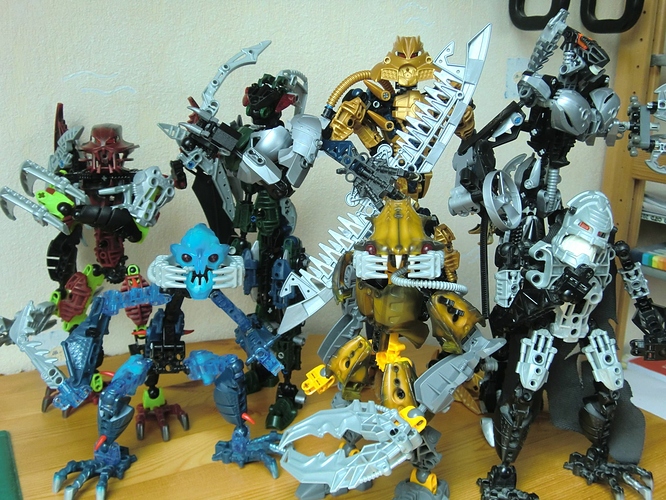 I added “brething equipment” (basically just one Mahri cable) to Takadox and Carapar, since at this time in the story they still couldn’t breathe air - as couldn’t Brutaka, but I didn’t want to spoil his colour scheme with a silver cable. Also I would have had to build a mutated version of him for total canon correctness.
Since the original Spiriah - to be honest - sucks, I decided to build my own version out of the sets. And I didn’t even need Tanma. Instead I cheated a little bit and added a single pinaxle. If you want to get a better look on the result, here you go: 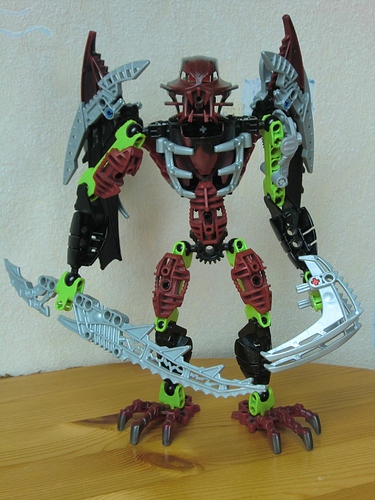 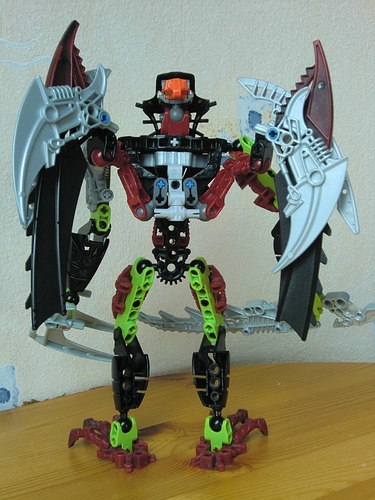 It’s nothing special, really. The idea of putting the mask in his chest came from looking at @pizzacheetah’s MOC Makuta Hormahk.

Are the arms the same length?

Yes they are. Took special care of that. Otherwise the handstand would be a little difficult to pull off, too. The Knight’s Kingdom armor makes the left arm seem a little longer, but they are the same length.

Lariska’s Face chest keeps throwing me off.
I keep seeing it as a second head.

Nice! I especially like the head and torso builds. Great work here!

Good job! I also like your Spiriah, looks way better than the original.

To be honest, to make a Makuta Spiriah look better than the original isn’t that difficult

Those blue pieces on her thighs look out of place. I can’t find any other Metru blue on her. Other than that, this really good! It’s surprisingly close to how I always imagined Lariska…

Edit: Just wanted to say that the use of CCBS for the mechanical arm worked very well.

It’s difficult to distinguish dark blue from dark green on pics sometimes. If you have a closer look at the torso you might see that the hip piece and the Bohrok foot on the chest are both dark blue, too.
I personally would have liked to add a little more blue, but I simply don’t have the right parts to do much more with.

Oh I see them now… You’re right it’s difficult to tell them apart.

Federation of Fear was easily one of my favorite story serials, and Lariska was definitely my favorite Dark Hunter, so I’m glad to see a MOC that looks so accurate to how I imagined her. I really enjoy both MOCs, and I’m glad you remade Spiriah. Such a cool Makuta doesn’t deserve to look like he does in his original combo set.

Also, thanks for the shoutout, chest-face is creepy, as always.

this is a pretty good moc, same goes for Spiriah

Maad Roody vibes here… The rahksh chest doesn’t help though, although they are often depicted so similarly, Greg actually confirmed Lariska ISN’T a vortixx, which when you think about it, is really very weird.

Really like the head. Looks very reptilian. The abundance of weapons is cool too.
My only gripe is the upper leg armour. all the other metru blue is so covered or obscured that these pieces seems a little out of place.

Pretty good, but why does everyone moc her?

There has been a lot of Lariska love as of late

The legs seem off to me, but I like the MOC overall.

That Federation of Fear is perfect though.

I’m not even sure myself why I wanted to make a MOC of her - it simply was in my head: “Do a Lariska MOC”.
And the only other Lariska MOC I saw recently I saw after I had already begun building my version …

Great job! It really does look lie something that would fit in G1.