There have been superheroes in the world for as long as man kind could remember. Dating back to the cave men age, there has always been individuals that are willing to rise up and protect others who cannot protect themselves and make the world a better place. But, where there are heroes there have always been villians. A man named Marc Diaz was exposed to a mixture of dna samples and radiation that gave him abilities of birds with those abilities he fought crime as Iron Hawk. But after the evil of the world recognized Iron Hawk as a bigger threat than your regular police, they decided to step their game up and they gained and found bad people with superpowers of their own. Iron hawk then realized that he couldn’t take on this evil on his own. But, his actians of heroism inspired other people to follow in his foot steps of good so now he will have to recruit them in hopes of restoring the world . He will have to form, The Majestic League

And of course here is my first hero 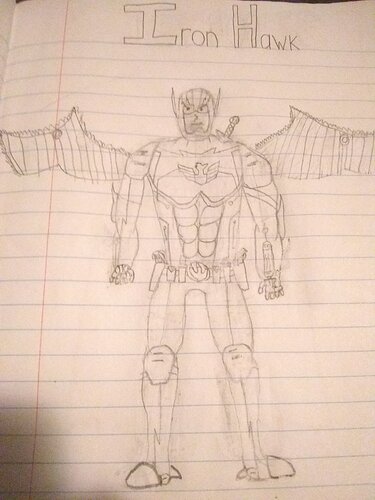 Name: Dave Smith
Other aliases: the infiltrator
Abilities/weapons: shapeshifting
Faction: neutral
Description or picture: middle aged semi baldling man with a slight gut, he looks like a really nice guy
Bio:he uh, stole some candy as a kid, he’s never gotten over it. He does mercenary work in the background

How many characters can we have?

Name: Jonathan servastus
Alias: The gamemaster
Abilities: Master of illusions and lies. Likes to hide behind smoke and mirrors. He posseses great scientific knowledge, and can create monsters. He also likes creating SAW-style traps for his victims.
Weapons: Robotic hand that can morph into a gun.
Faction: Villains
Description: He is a cyborg, wearing a Cape, top hat, and chrome mask, and carries a cane. The gamemaster has a completely robotic right arm, and cybernetic implants throughout his body.

Bio: As a kid, Jonathan Servastus liked to play games. One day, Jonathan’s homeworld had been ambushed by alien overlords. He sustained serious injuries in an explosion, with low chances of survival. However, a sympathetic scientist had found Jonathan close to death, and took him in. He gave him lifesaving surgery, including the attachment of a robotic arm and cybernetic implants. However, he would never be the same. Jonathan suddenly experienced an urge to be in control of every situation. This, combined with the trauma of the explosion and surgery, drove Jonathan insane. He killed the scientist in a psychotic episode, and adopted the villain identity of “the gamemaster”, drawn from his childhood love of games. The gamemaster would go on to host various game shows, torturing the contestants for his own entertainment.

Name: Unknown
Alias: Scrapper
Abilities: Scrapper has incredible speed and armour. His helmet allows Night Vision, and enhanced hearing. He can also fly for short periods of time.
Weapons: his Magma Claw, sword and built in minigun
Faction: Villains
Description: Scrapper is mostly black and tall, with massive black wing-blades and teal highlights. Some of his body has Magna flowing through it. He has wheels for feet.
Bio: Not much is known about Scrapper, apart from that he never speaks.(Outdated)

Edit: Since the Arena Battle Rp, a lot has changed about Scrapper. You may want to read that first.

Name:unknown
Alias:controller of ice
Abilities:master manipulation of ice and water (ultimate move summons a glacier to drop)
Has ice sword and razor shield
Alliance:anti hero/mercenary
Appearence:golden mask(bionicle mask of control) clad in white and silver armor with blade wings wears worn cloak
Bio:as a child the controller of ice was exposed to radiation at an antartic nuclear facility when it had a meltdown, after that he grew to learn and master his abilities to get by in life by any means necessary

Name; Sadie volara
Alias; shade
Abilities; can travel through shadows and is very agile on her feet. Can also control shadows to form weapons for her.
Weapons; good with anything though especially blades
Looks; Black hair tied in a ponytail, brown eyes, ussually wearing a black jacket and jeans.
Bio; as a child she had seen her family get murdered by some psycho though rather then kill her too he kidnapped her to raise her in his twisted way. Eventually she killed him and escaped though after that trauma and never being able to deal with it took a huge hit on her.
While it could be argued she’s not a villian due to the fact she hunts and kills anyone who’s hurt others or sinned in some way nobody knows what’s wrong with her anymore. Some have guessed multiple personality or sociopathy but she’s obviously insane and needs help though she refuses the suggestion.

Name: Lucy Tictus Vimar
Alter ego: L
Gender: Female
Alignment: None
Appearance:
Lucy has 5-inch black hair that she leaves loose over her shoulders. Overall she has a slim build but does her best to stay fit. She is working on her costume.
Power: Feeder Parasyte
She is able to create advanced technologies at a rapid pace but each time she draws upon the ability, her ability to use it is drained.
She is able to draw information and knowledge with the parasyte, in turn not taking up her overall ability reserve but she has to take to craft her tech.

She can allow the Parasyte to take over her body in turn for short-range technokinesis for a period. She can’t do much about what the Parasyte wants to do or when it wants to give up control afterward.

Drawbacks: She has a finite though large reserve for her abilities.
She needs materials to build.
It’s a literal parasite. I don’t think that’s good.
She can’t do anything on her own without it or its powers
As she duplicates an object, it gets harder for her to make as quickly or as well as before

Backstory: Lucy received her parasyte by finding it within a marsh and with her usual big brain good ideas, she decided to take it home. Once she got it home, she put it into her snake cage, where it took over the snake. It slowly grew more and more, to the point where it was strong enough to move into her body while she was sleeping.

Name: Project: Runa
Other aliases: N/A
Abilities/Weapons: He has a mask connected to his personal database(data gathered from Project: Keeneyen and info off the internet) and a GUI to show them to the user, a laser that can replace his robotic right arm called Project: Judgement(shoots a powerful laser(takes one of my posts to prime, 50 total posts to cool down after.)), Project: Gardna to create an energy shield thing the height of his body and half the width, Project: Keeneyen(pronounced keen-eye-n), which can scan people to learn some of their abilities and other info, Project: Bladearm, which lets him use a retractable armblade, and his robotic right forearm. (Note: all Projects listed except Judgement attach to his upper forearms, and can only use two at a time.) Can shoot lasers out of his fingers and palms, retractable wings, thrusters in his feet(one post to prime before use, else face damage. 8 uses on ground when primed.), ‘R-Mechanical Overdrive*’, and ‘R-Mechanical Core Discharge*’
Faction: heroes.
Appearance: Tall-ish, slim. Brown hair, mask looks basically like Bull Skull Mask with green accents and red eyes. Metal chestplate with retractable shoulder armor. Green crystal energy source in chest. Green metal armor over the rest of his torso. Metal hands and forearms. Green clothing on upper arms, protected by forcefield same strength as metal. Green metal on lower legs, rest of legs has normal metal colored armor.
Rough pic of him here.

Keyword here being rough.
Bio: This young man(currently 17) built his own enhancements at the age of 14. After creating many projects, he became a vigilante, using his abilities to fight, and often kill, criminals he finds. Sarcastic, but very eager to learn and know everything he can. Always looks for more information.

@Shadowrockboy190 I would like to add another thing for Project: Runa. I’d like to add his ship, Project: Excelerator. It’s basically an unarmed ship big enough for a cockpit, living quarters, and storage area for his other Projects, but is very mobile in the air. Would that be accepted?

Name: Unkown, but he does use ‘Viral’ as his username.
Alter ego: Manpower
Gender: Male
Alignment: Evil
Appearance: Manpower is in his thirties, and wears a mask that covers up his eyes, while also allowing him an advanced HUD that allows him to control multiple clones at once. He also likes trench coats, and power gloves. He has scraggly brown hair, and has stubble.
BIO: Originally a low level technician, Manpower constructed a special suit that would allow him to create diffrent copys of himself. The more clones he makes, the weaker he becomes.

Thats at alliance i meant faction

Name: unknown
Alias: Hydron
Abilities: besides he has a massive armor on him, he can run very fast. His armor is extremely powerful, and can protect him from lots of dangers.
Appearence: 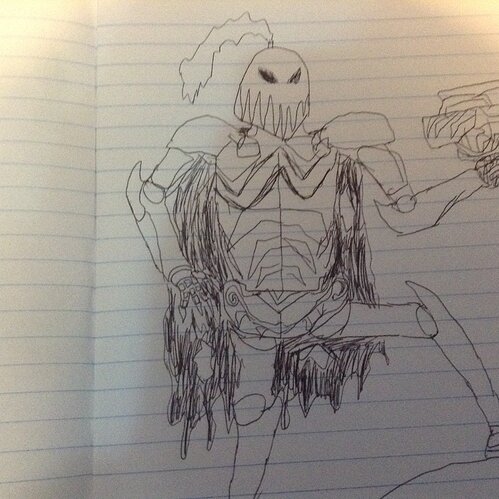 image.jpeg1936×1936 943 KB
Weapons: bladed laser guns
Gender: Unknown
Bio: Hydron is a dark warrior that no one knows who he really is. He is a bounty hunter, who helps everyone, depending on the price.
next page →