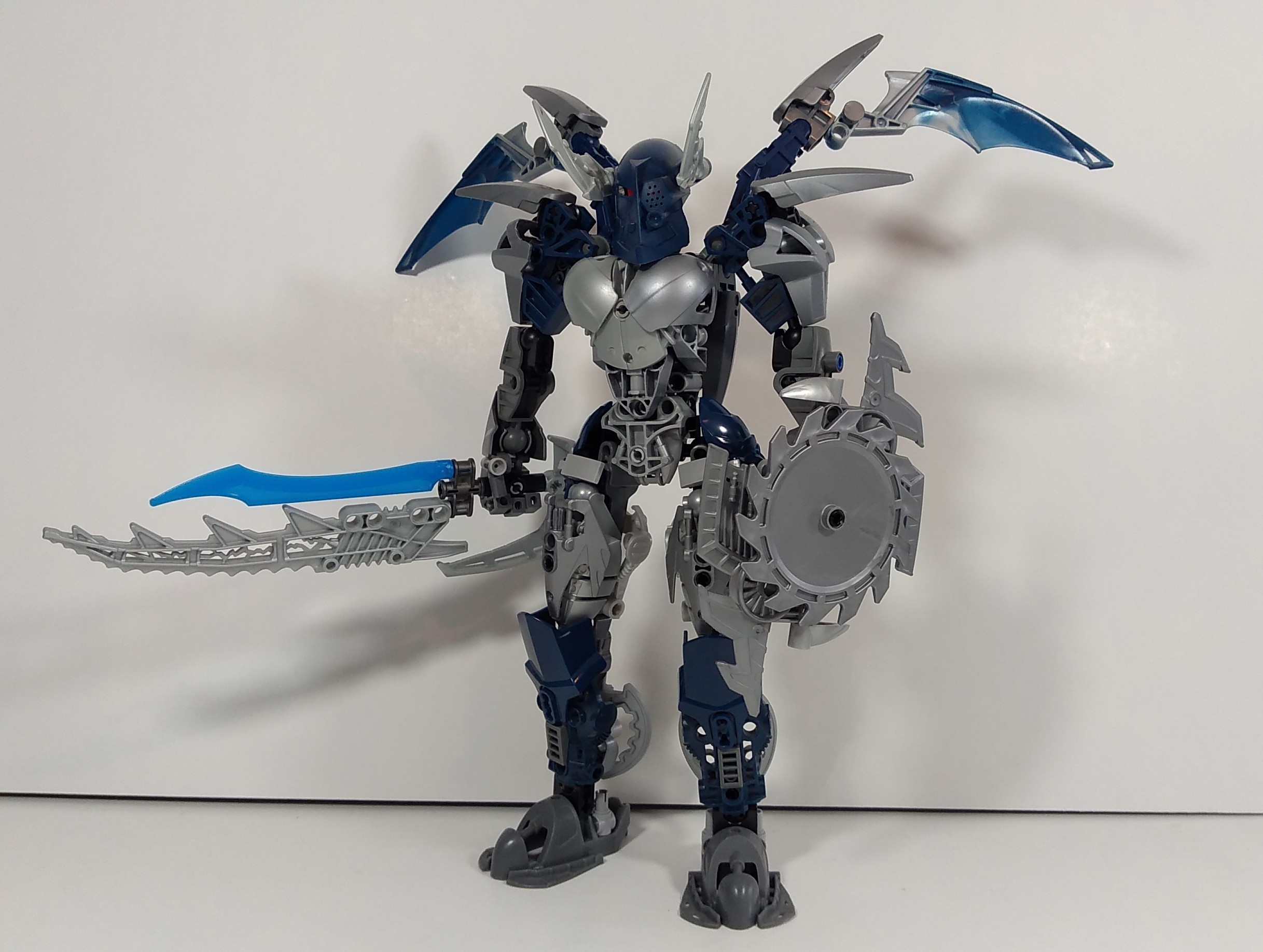 A Makuta with a strong sence of honor and integrety, Barrion was responsible for ensureing the Brotherhood remained true to it’s cause. Niether a full time warrior nor a Rahi creator, Barrion spent most of his time on destral. There he used his kanohi Rode to perform spot checks on his fellow Makuta, evaluating their commitment to the Brotherhood’s values. Despite this he did join the army assembled to fight the Barraki. Many years later Barrion was secretly killed by Terridax, when he uncovered the Makuta’s self serving ambitions. His death was staged to look like a dissapearance, with most Makuta believing Barrion had simply abandoned the Brotherhood. 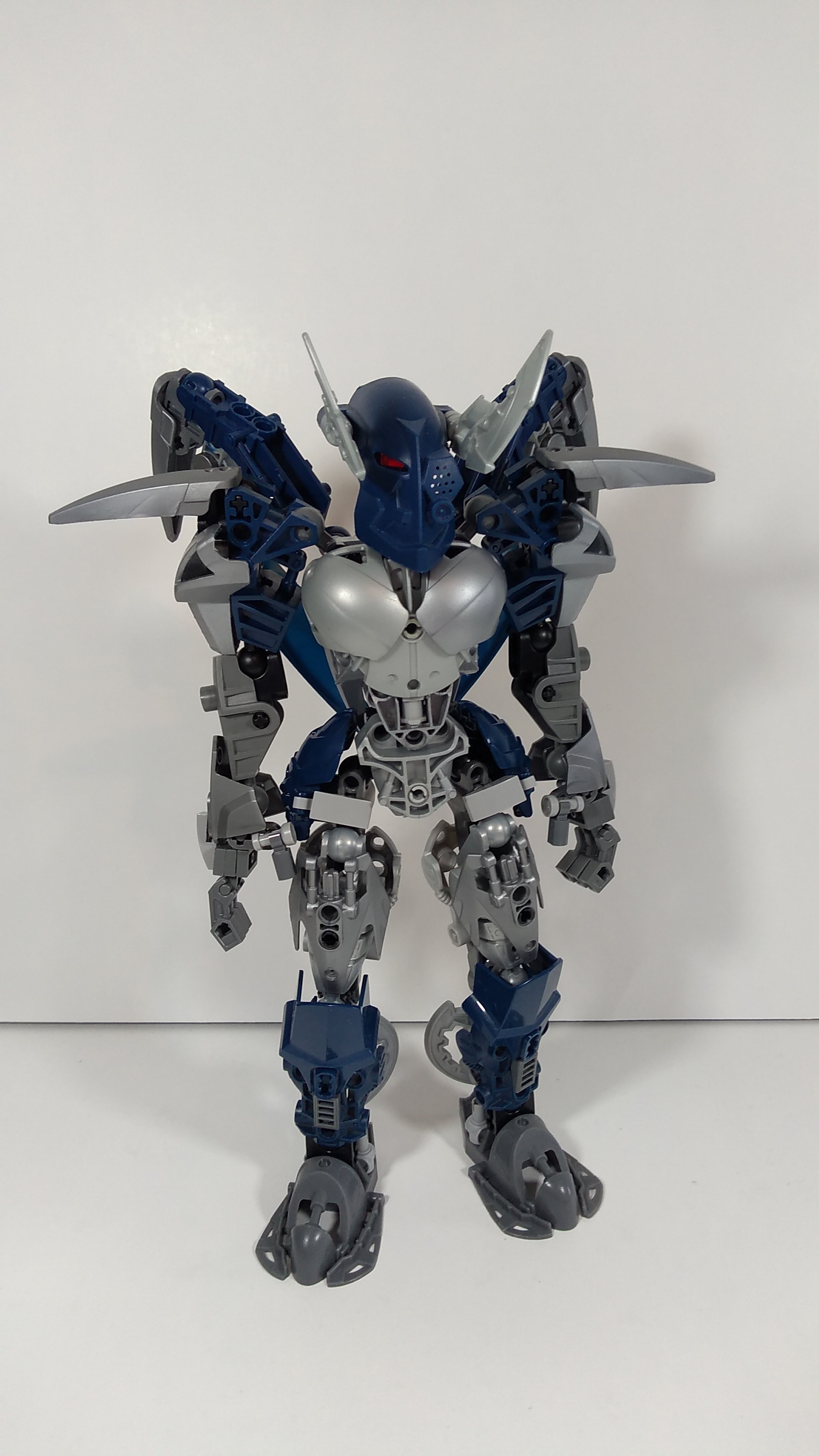 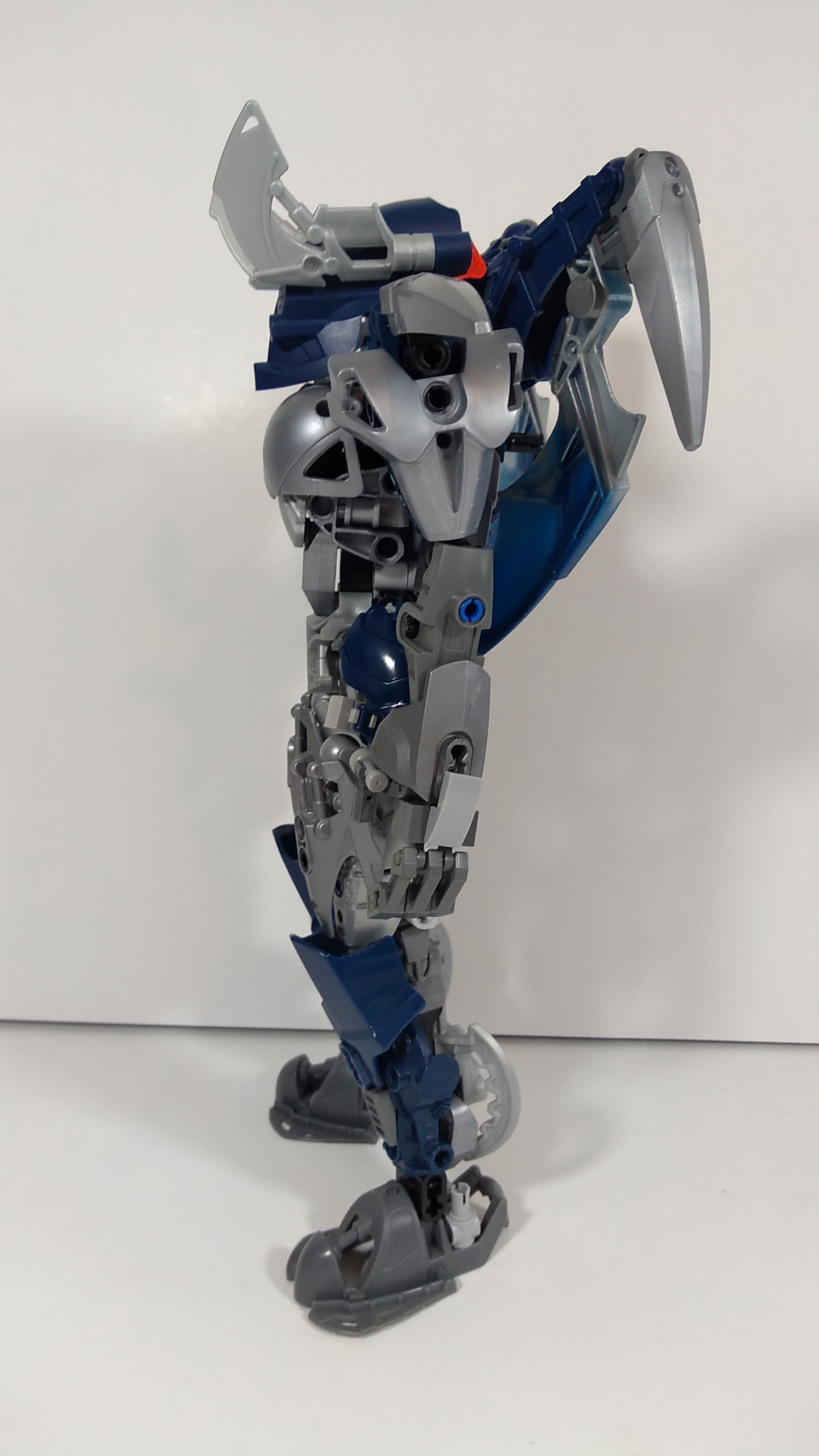 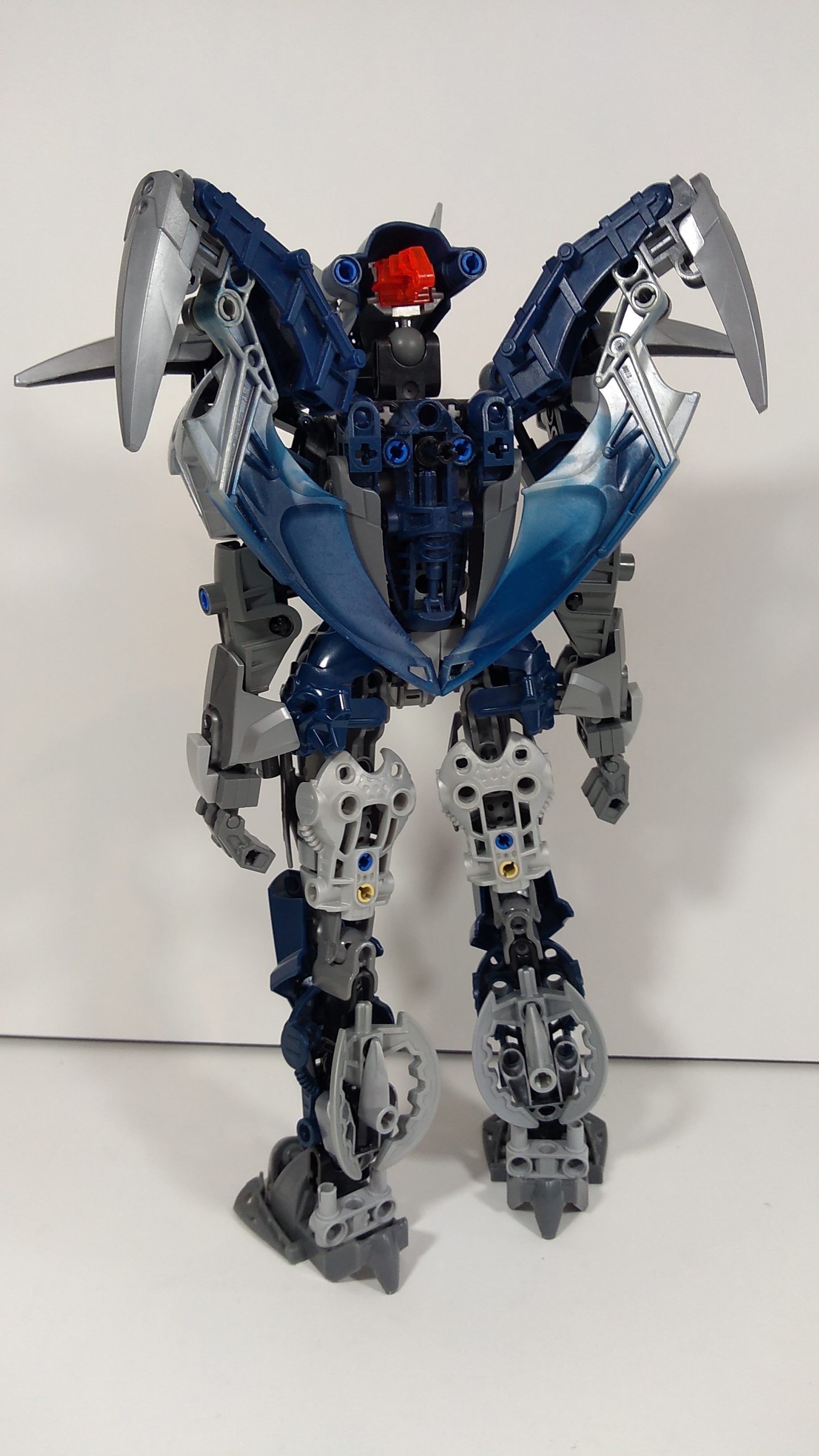 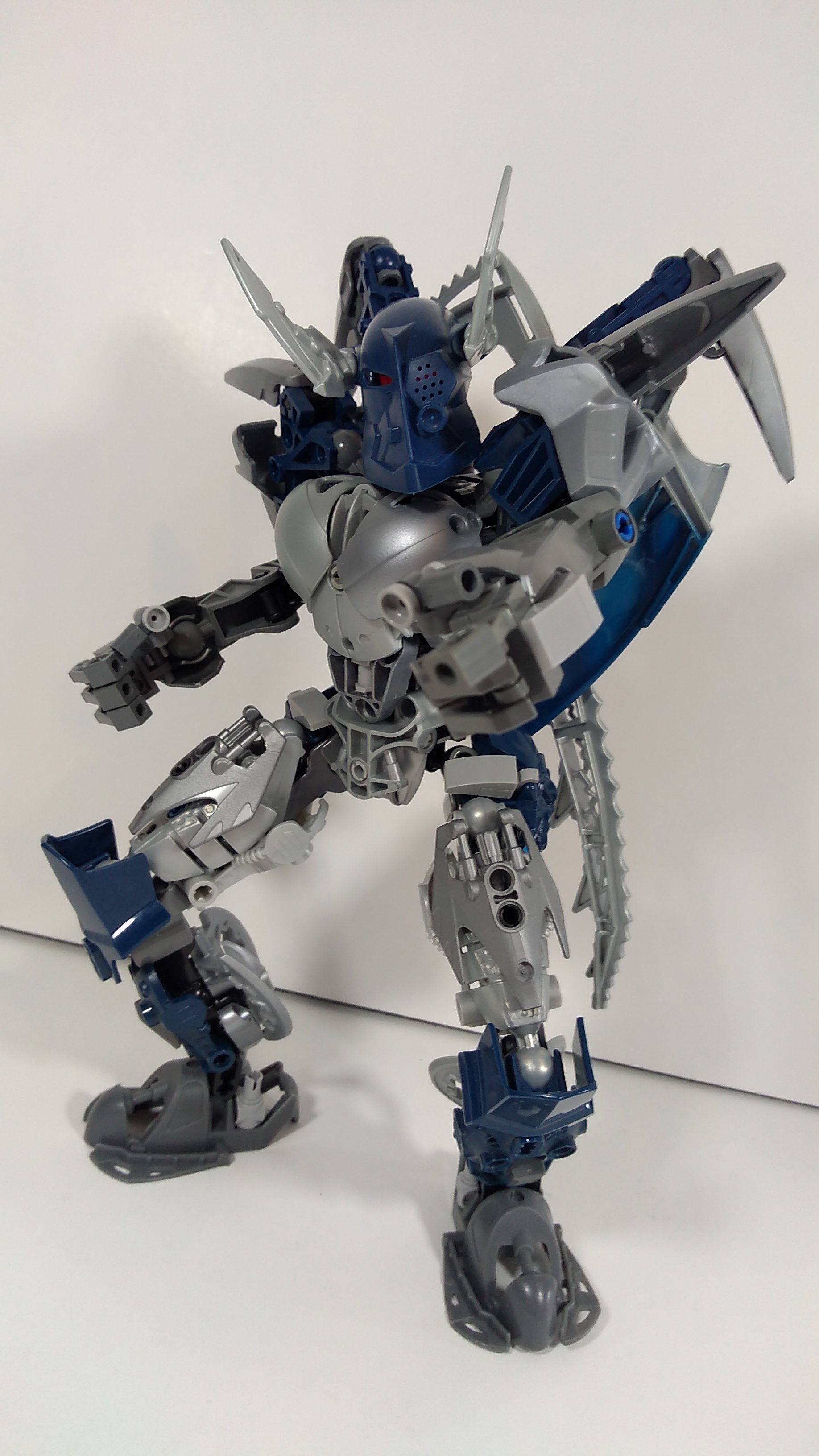 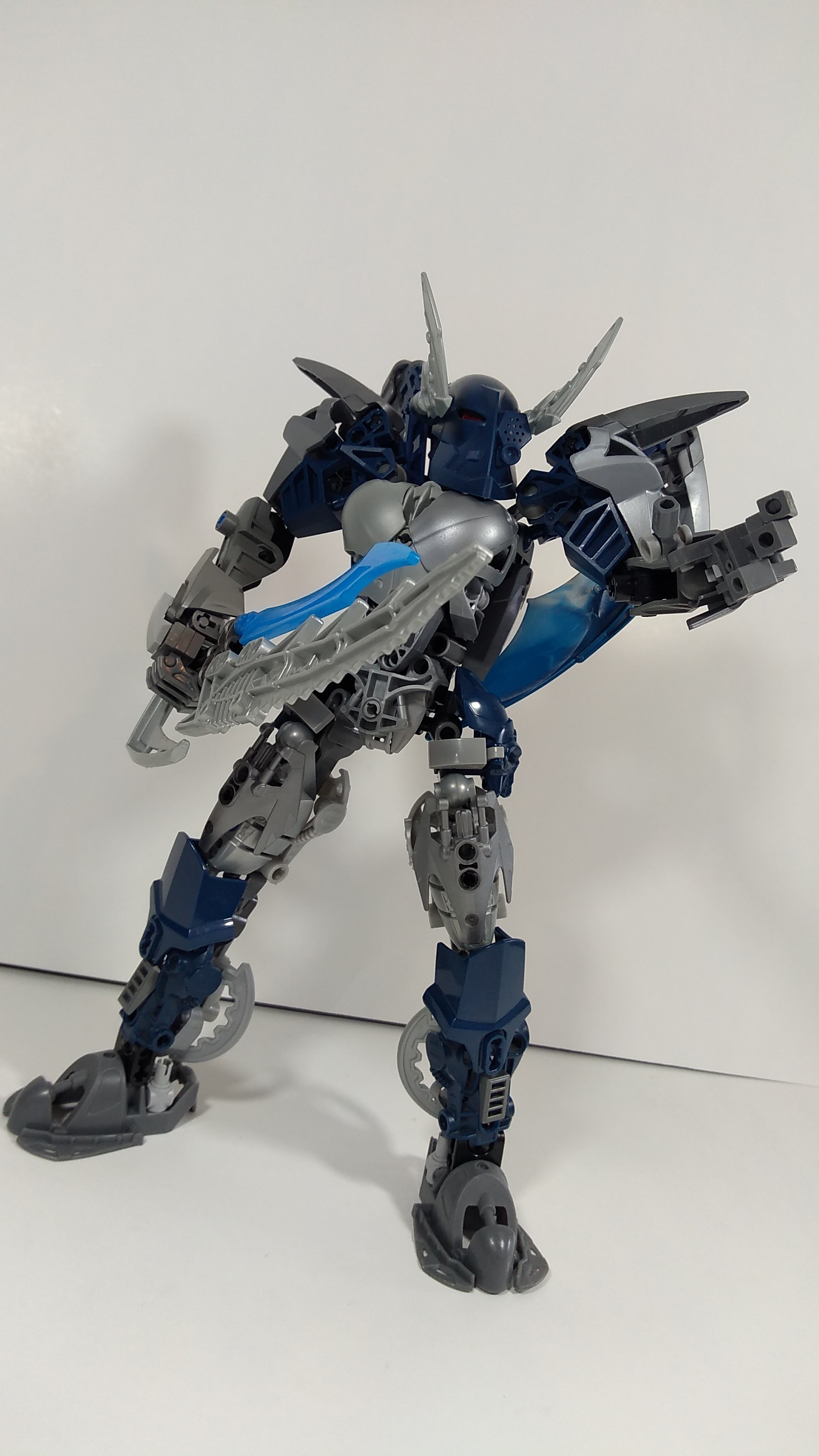 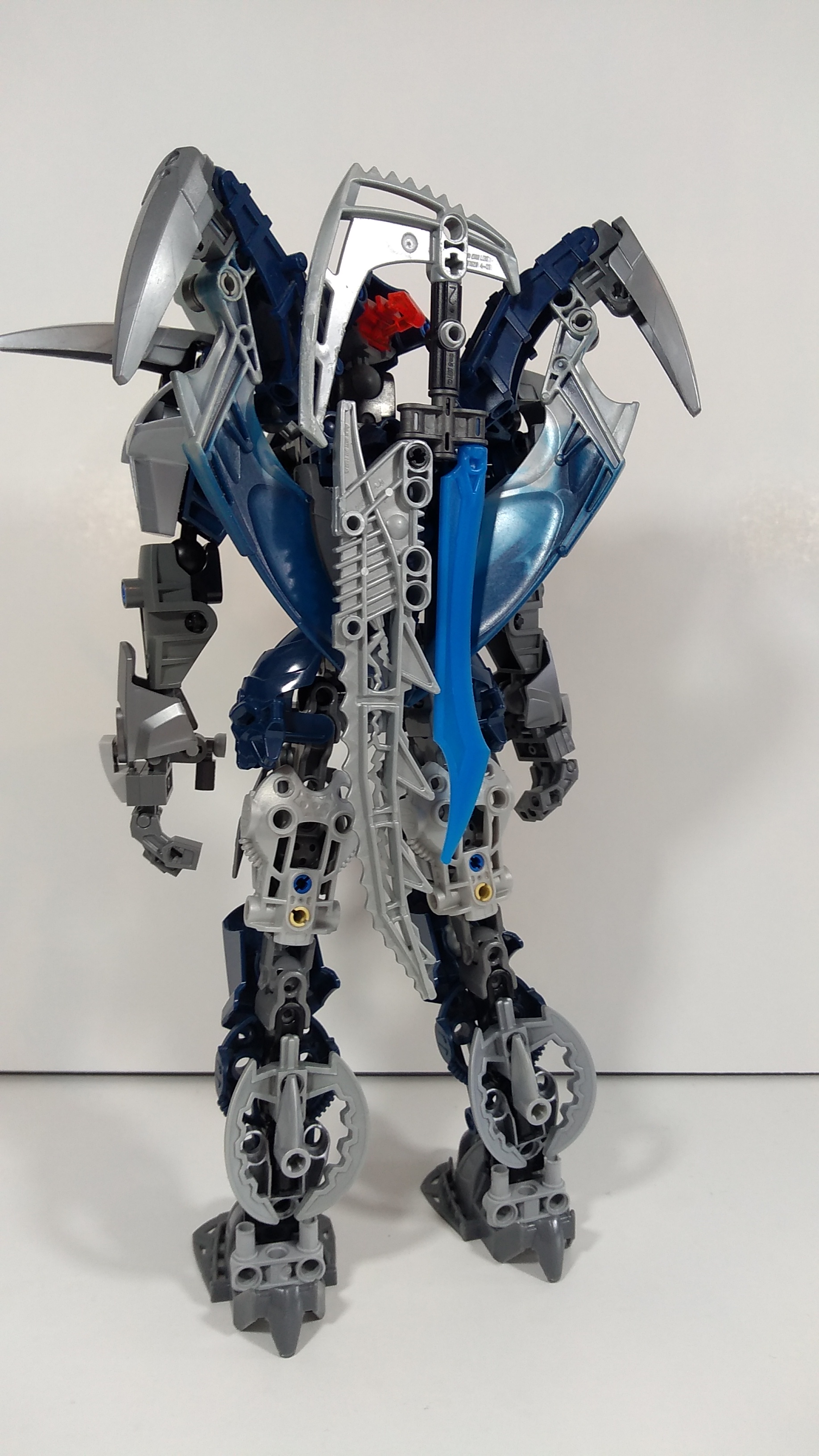 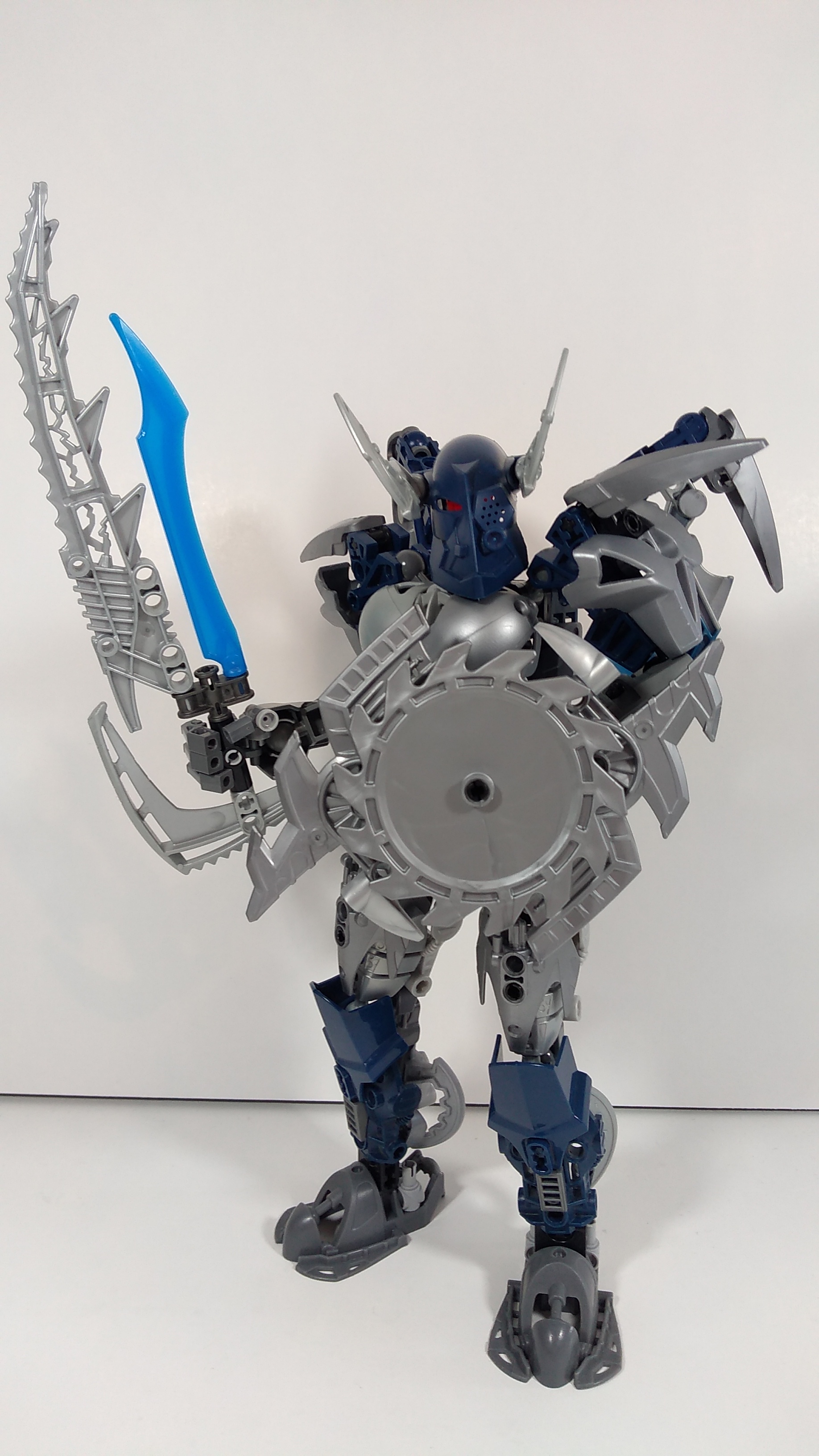 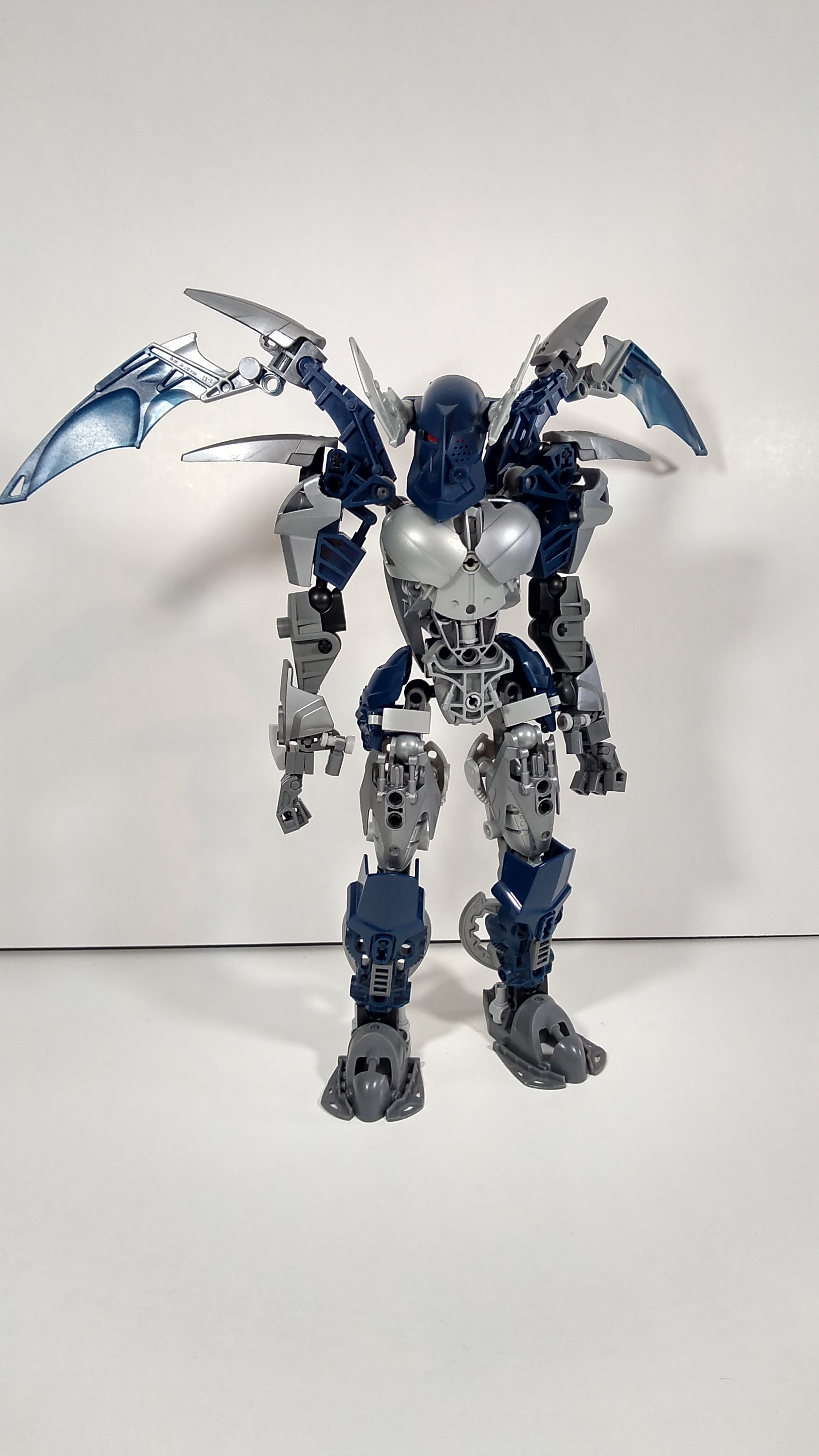 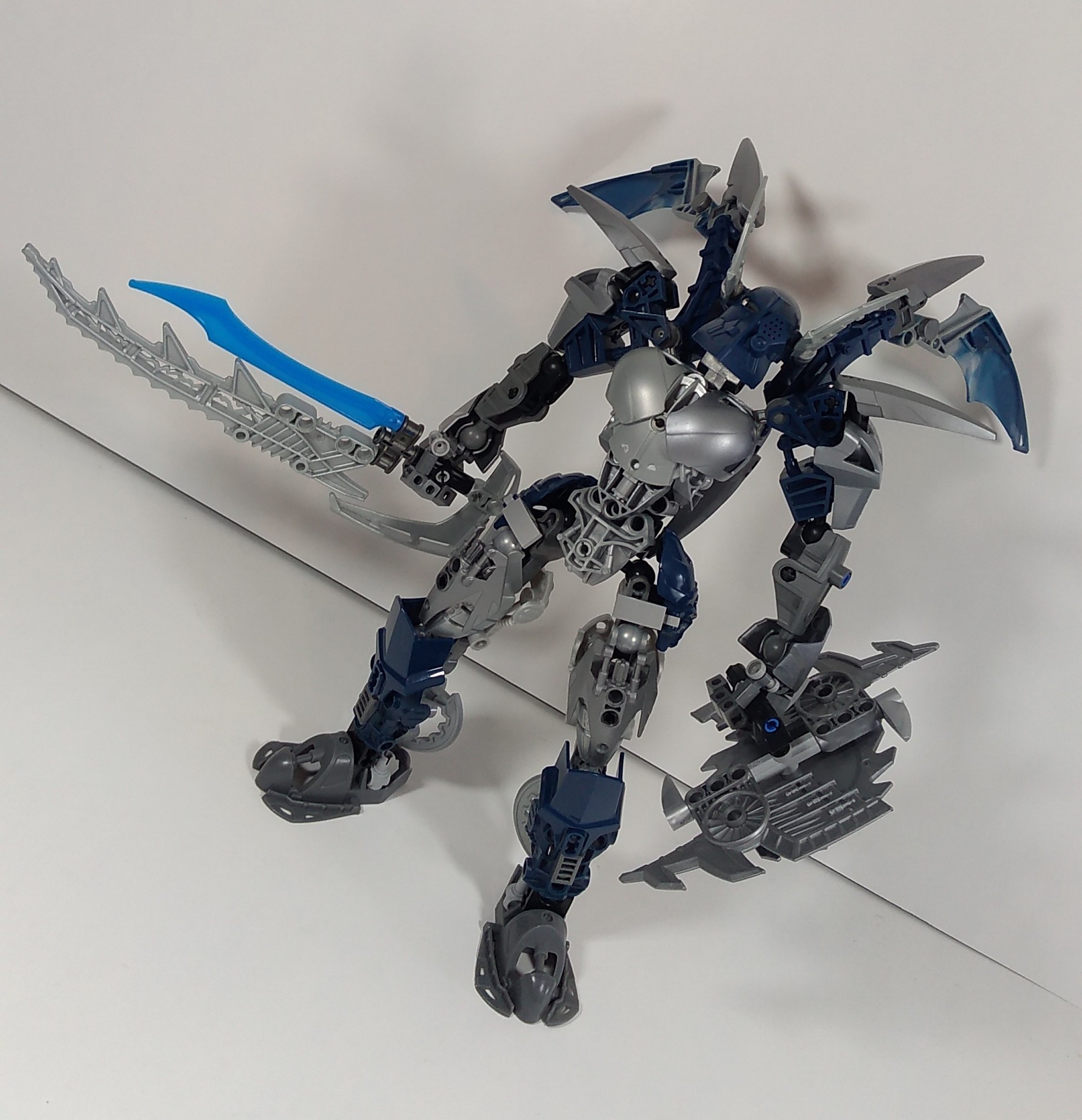 I’m definitely happy with how this MOC turned out and it was a very refreshing building experience. I don’t build Bionicle MOCs very often anymore so it was nice to go back to the classic G1 aesthetic. (With some CCBS bits here and there)

Great MOC, but where did these come from?

The masks horns?
They’re the blade pieces from Tahu Mistika.
If you mean in story, I imagine they’re just ornamental pieces of the mask.

Neat. I like that it uses some grey, that’s not too common. Also very interesting how you put those CCBS shells on the upper legs but managed to make them look and work as if they were part of the lower legs. Personally would have covered the open pins of the parts you put behind the ankles. Very nice torso armor.

There he used his kanohi Rode to perform spot checks on his fellow Makuta, evaluating their commitment to the Brotherhood’s values.

That’s basically what Makuta Furtaan’s job was already - only that Furtaan didn’t wear a Rode, of course. (I find it kinda funny how Barrion also has those spikes on the shoulders extending sideways, just like Furtaan

Many years later Barrion was secretly killed by Terridax, when he uncovered the Makuta’s self serving ambitions. His death was staged to look like a dissapearance, with most Makuta believing Barrion had simply abandoned the Brotherhood.

That’s honestly not very original and variations of this have already been done. Any chance you could come up with something more interesting? If you need suggestions I could try coming up with something for you myself?

In short:
Awesome MOC
Backstory needs a bit of work.

I was unaware of this, should I change his role?

That’s honestly not very original and variations of this have already been done. Any chance you could come up with something more interesting? If you need suggestions I could try coming up with something for you myself?

Honestly I was just trying to avoid contradicting canon by keeping it simple. I can try coming up with something more interesting though.

Actually there are some more Makuta needed who are assigned to islands. I’d suggest the island of Tevan since there you’re pretty free with what you can do.

I love the design of the chest. Give the MOC a solid feel.

I dig this MOC a lot. I enjoy when people take G1 elements and make something that’s more complex but still looks clean. And you did a good job of using smoother G1 pieces so that the few CCBS bits you used don’t look out of place.

Wouldn’t be a Hawkflight MOC comment™️ without some nitpicking, though. The clipped pieces on the thighs look a bit odd; I would redo the forearms so the hand is straight under the elbow and not pushed out towards the sides, the H-pins could be replaced with 3-long beams or some system plates and slopes. And the legs look a little hollow from the back but idk if that can be helped.

Still, one of my favorite entries in this project.

To Barrion nothing was more important than honor and loyalty. Assigned to the region of Tevan Barrion taught the citizens the way of the warrior, training them to fight with honor. When the Brotherhood fought the Barraki Barrion led his four strongest warriors into battle as part of the Brotherhod forces. During the battle Makuta Terridax earned Barrion’s respect, saving his life and leaving Barrion in his debt. As such, despite unspoken moral objections, he remained loyal to the brotherhood when Terridax seized control. However this loyalty did not last, when Tevan was chosen to serve as a testing ground for the Visorak horde Barrion chose his people over the Brotherhood. Once again leading his four best soldiers into battle he held back the horde long enough for the others to board a ship and escape the island. Eventually the Visorak overpowered the five warriors, who impaled themselves with their own blades knowing that otherwise they would be taken alive and interrogated or used as test subjects.

@Gilahu Hopefully this is better, and doesn’t contradict anything. I wasn’t sure what species lived on Tevan so I tried to keep that vague.

I fear there are still a few problems:

Also there’s not really a reason for the Visorak horde to be tested on Tevan in my eyes.

On top of that I’d rather not have any more Makuta commit suicide (there are already at least four Makuta deaths that go in that direction). But I know that by now coming up with an original cause of death is tricky…

If you want I can try coming up with some suggestions?

If you want I can try coming up with some suggestions?

You’ve probably already thought of this, but do you have any Makuta that were killed by Toa of Iron? Given the Makuta’s fear of the element, it would make sense for it to have happened at least once.

Good use of Gali mask

Big fan of this. I really like the lower legs and the custom weapons. Wings look really cool as well.

Could you clarify what you mean by the blades from Tahu Mistika? I looked that set up on BL and I don’t see any blades like that.

Those are the blades used at his rotor shield thing

Oh wow, they totally are. I couldn’t see them from the correct angle in the pics I was looking at. I thought it was a much smaller piece.