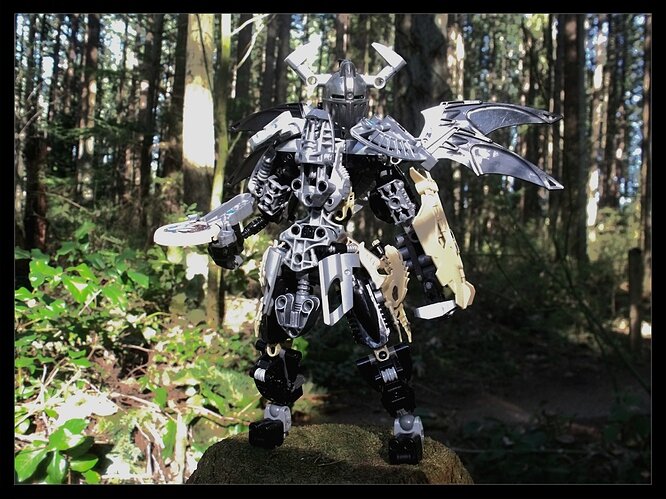 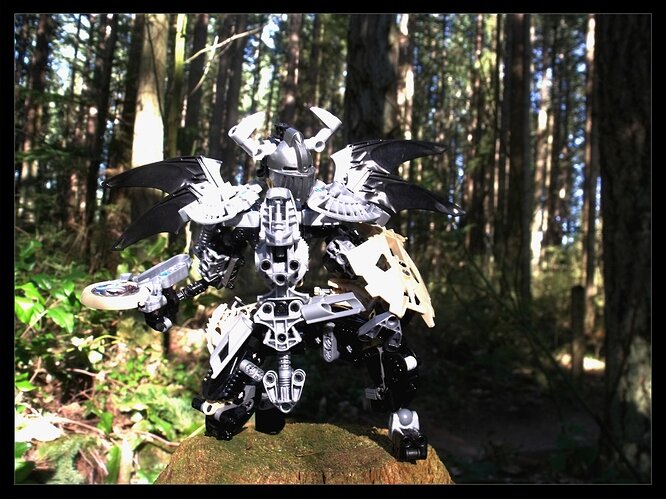 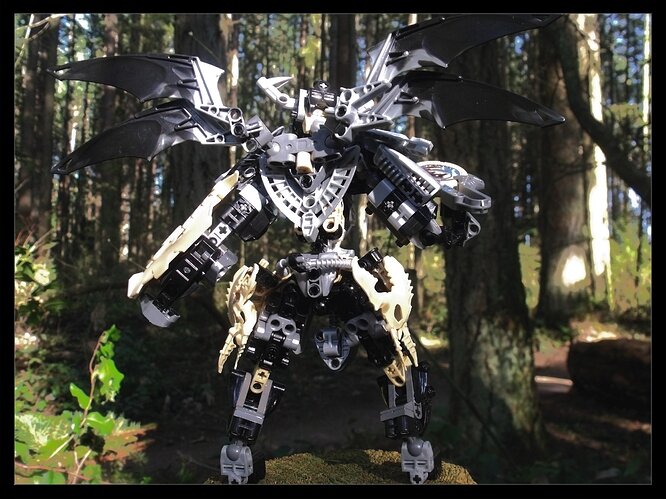 Short Backstory:
Once a cartographer and then a legislator, Makuta Hakuin took up the vacant post of Head Propagandist after Makuta Radayi’s death. In the centuries that followed, one of his subordinates came to rule over him through careful use of a Mask of Charisma, and his eventual support of a doomsday cult led to his disgrace and soon-to-follow death.

[details=Long Backstory]In the early years of the Matoran Universe, Makuta Hakuin was a Makuta not so different from any other. He took up the task of charting and mapping the world to a highly specific degree, and his subordinates accompanied him to the five ends of the Great Spirit Robot. In time, he came to assist Makuta Avecious in his legislative duties, and Hakuin’s worldly knowledge (gained as a result of his exploration) allowed him to solve differences between obscure communities that Avecious simply had no knowledge of. Following the Metru Nui Civil War, he was assigned to the remote but bustling port-city known as Ahiku Bay. Many millennia later, Makuta Radayi’s famous descent into madness, and his subsequent destruction of the Zanua territory, required Hakuin’s attention. Radayi had, for years previously, neglected his post of Head Propagandist, and Hakuin was a natural fit for the role, now that it was officially open following Radayi’s death on Zanua. Hakuin collected the necessary equipment from the Brotherhood base on Zanua following Makuta Sidoshi’s full investigation, and left back to Ahiku Bay before Sidoshi’s operatives razed all evidence of the Brotherhood’s negative influence on the ravaged island. Hakuin and Sidoshi both left operatives to oversee Zanua’s recovery. With his new position of Head Propagandist of the Brotherhood and isolated territory, Hakuin came in time to have no need to travel outside the city, and the nature of his work transformed much of the culture of the city he oversaw.

The Nature of his new duties included such tasks as:

-Issuing official statements in regard to such situations that occurred on Zanua, post-Spiriah-Zakaz, and the Metru Nui Massacre.
-Commissioning art such as Statues, posters (similar to the posters of Dume in Metru Nui), and written works that portrayed the Brotherhood in a positive light
-fostering pro-Brotherhood sentiments in ALL communities across the Maturan Universe

Due to his lack of mobility and interaction with only a select few individuals over the course of several thousand years, Makuta Hakuin slowly came under the spell of an individual using a Mask of Charisma against him. This individual, named Sedonis, was a member of Tobduk’s species. While Tobduk gained strength by feeding off of anger, Sedonis fed off of bloodlust, and used his talent for seeding discord to cause situations favourable to his power to emerge. He was in the upper echelons of Makuta Repirax’s Bloodeye rebellion several centuries earlier, and used his Mask of Charisma to fuel Repirax’s rage and unbalance his emotions. He affected Makuta Hakuin in much the same way, and after several decades strengthening the bond between his Kanohi and his in Ahiku Bay, Sedonis orchestrated a similar uprising in Ahiku Bay. His followers came to be called the Hands of the Long Tongue, and the violence they committed was fueled by their extreme beliefs, which posited that Makuta Hakuin, Sedonis, and the residents of Ahiku bay ought to locate and use the Mask of Life to rule the entirety of the Southern Continent. The Toa of Ahiku Bay were killed in the violent uprising, and only a Toa of Plantlife and a Toa of Iron escaped into the dense, vast forests south of the City. Hakuin set off with Sedonis and a number of Hands of the Long Tongue shortly thereafter, to find the Mask of Life, which was rumoured to lie in the Deadlands beneath Mount Valmai. Unfortunately for Makuta Hakuin, the Toa of Iron had found a ship headed to Stelt after escaping, and the Brotherhood was soon notified of the situation. Makuta Sidoshi’s operatives and Makuta Icarax located and slaughtered Sedonis and his Hands in the Deadlands, and gravely injured Hakuin, who teleported away to Ahiku Bay. Sidoshi, with knowledge of the Mask of Charisma (gathered from the Toa of Iron), crushed it, and it’s manipulations were undone. Ahiku Bay had been retaken during Hakuin’s absence by the two Toa, however, and Hakuin returned to find his allies dead. Leaking antidermis and in pain, the Toa of Iron tore open the Makuta’s armour and the Toa of Plantlife incinerated his essence with a plasma staff.[/details]

The Moc/ The Project

@Gilahu, this is my third and final entry into your Brotherhood project. I hope you like the moc, as I am quite happy with it and believe it to be better than my other two in a certain regard. Of course, I based much of the armour design on a samurai, but I still think it fits a Makuta look (there are green studs in the eye-holes of the Knights Kingdom mask too!). Let me know if the backstory can be improved somehow; I spent significantly less time on the backstory of it than the other two, though more time on the moc itself. I tried to incorporate other Makuta into it, and could do more if you suggest something.

although the lighting is a little rough, the moc itself looks great. I’m a big fan of the tan, and I especially like that helmet

A little short for a Makuta in my eyes, but looking good. It’s nice to see some tan, and the armor also looks interesting. Also unique use of a Knights Kingdom helmet.

Could you maybe take one additional picture in front of a neutral background, though? I think that will work better for the collage of all project entries I’ll eventually do.

Are the names Hakuin and Ahiku Bay somehow derived from the Matoran dictionary?

I don’t want a Makuta being assigned to a city. He can take up residence there, but that should be because of either personal interests or a job that is best done from this city. How much he actually influences life in the city in the end doesn’t matter.

post-Spiriah-Zakaz, and the Metru Nui Massacre.

and used his Mask of Charisma to fuel Repirax’s rage and unbalance his emotions.

I’m not sure if I like that… You can leave it in here for now, but be prepared that it might get ignored in the future.

the Hands of the Long Tongue

That’s a bit of a weird name to be honest. Any chance you could come up with a name in Matoran?

ought to locate and use the Mask of Life

It’s unlikely anyone knows where to find it - let alone that it even exists.

Mask of Charisma (gathered from the Toa of Iron), crushed it, and it’s manipulations were undone

That’s not how a Mask of Charisma works. You can use it to subtly influence someone, but you don’t outright control them. The “control” over Hakuin would come from Sedonis influencing Hakuins way of thinking and thus his goals in life over a long period of time. Hakuin would actually believe certain things eventually, just like you’d believe something someone convinced you of. The Mask of Charisma makes this convincing easier, however. Destroying the mask doesn’t have any effect.

the Toa of Iron tore open the Makuta’s armour and the Toa of Plantlife incinerated his essence with a plasma staff.

That’s Toa killing a Makuta. The project rules mention that I don’t want any more Toa responsible for Makuta deaths. So please come up with something else.

Overall: Nice MOC, I’d like a picture in front of a neutral bakground, though, and the backstory needs some adjustments. I’ll get back to you once a few things have been discussed with RSG.

The lighting could be better a little better, but I really appreciate that you’ve photographed him in his environment, as he does fit very well - especially so thanks to the helmet you’ve used.

Besides the head the moc is great

I’m in love with how you did the shoulder and torso armor. The knight aesthetic is great!