Wreight is part of the Makuta Community project thingy.

Wreigth was a kindly Makuta. He seemed a bit grouchy and stiff, but not very hostile. He enjoyed experimenting with Kanohi, and tried his hand at maskmaking. One day, he showed the other Makuta his mastery with maskmaking, at terridax’s request. He created a mask, and when finished, he held it towards his comrades, announcing the creation of the Mask of Undeath. However, when he tried to wear it, the other Makuta didn’t believe him, expecting more. They threw the mask into the sea, where Wreigth chased after it, attempting to retrieve it. The Makuta laughed at this attempt to save a seemingly useless mask, but Wreigth wanted revenge. He tried to recreate he tried to make a better mask of Undeath, and accidently messed up, in his rage. This version of the mask was simply too powerful, and wearing it killed Wreigth, dissolving his essence after a few seconds. The Mask of Undeath which had been thrown into the sea wound up on Karzhani’s island, where it was given to a matoran.

Powers: Wreigth had a sword, which channeled the power of the Kanohi the user wore. Wreigth wore the mask of X-Ray vision before he equipped the Mask of Undeath. He also possessed a hammer, which he used to forge his masks. 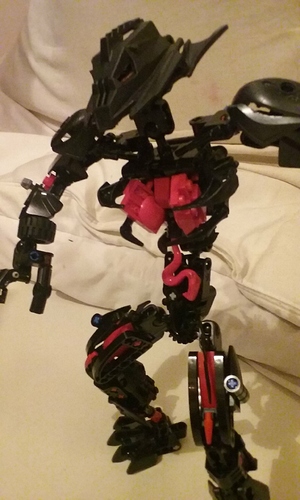 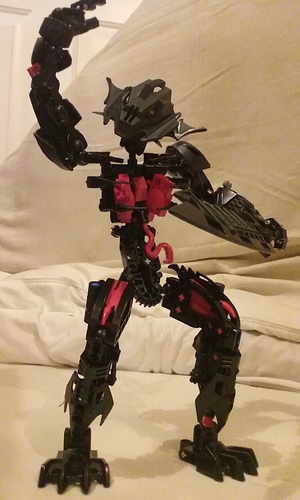 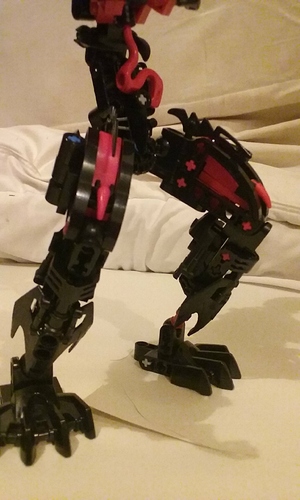 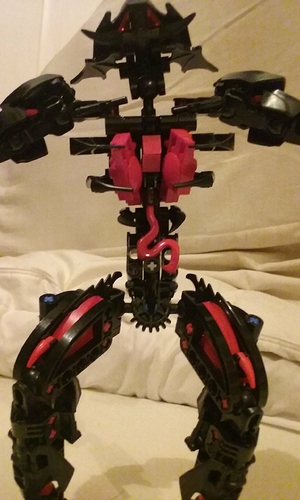 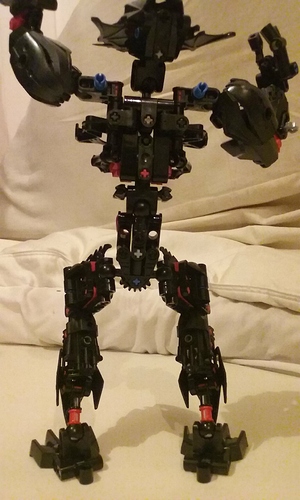 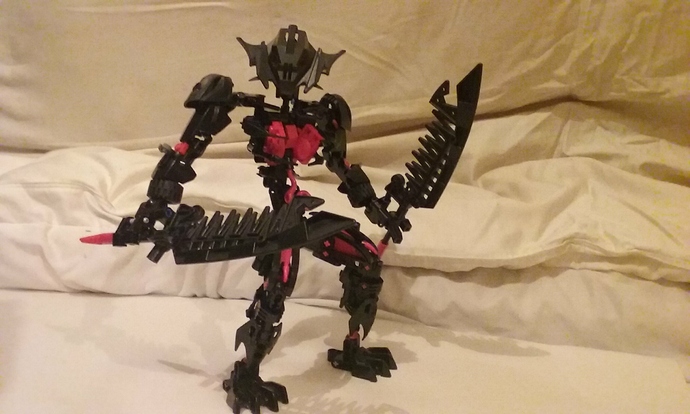 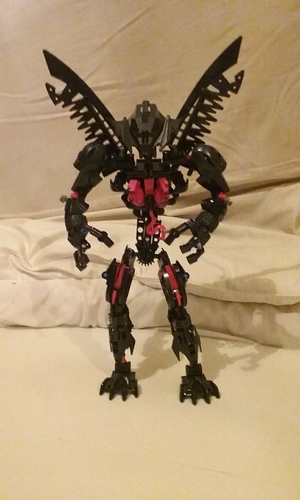 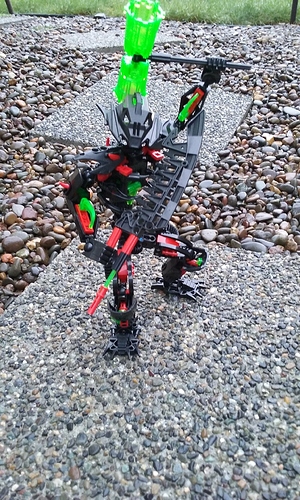 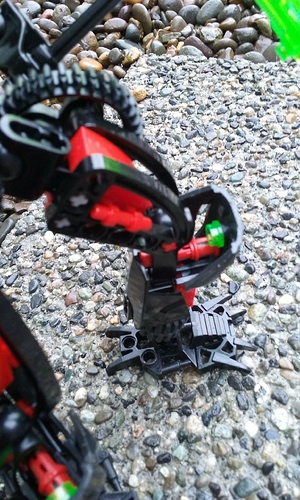 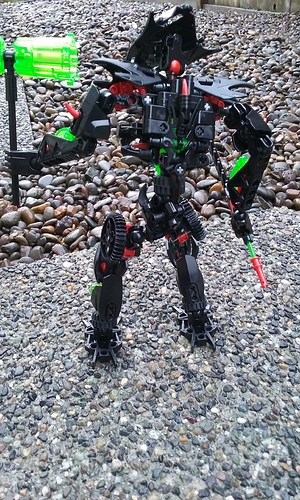 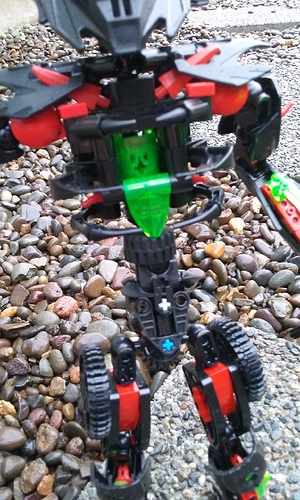 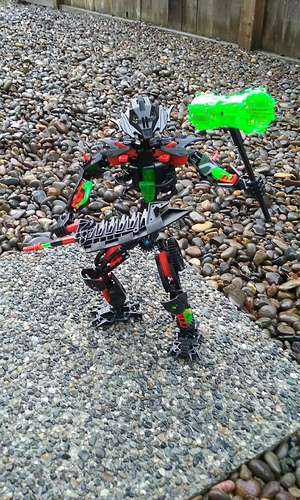 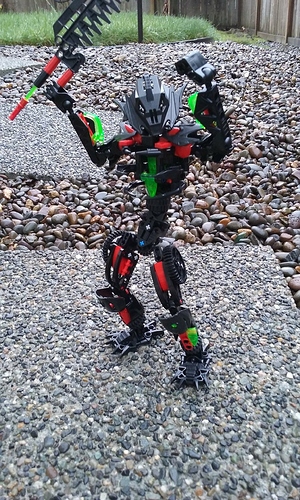 Cool! There’s a couple holes in the waist but aside from that very good job!

The shoulder connection is bad but the “red-guts” gives it a different feel compared to other black and red mocs.

Not really sure how that works, surely his armor would just crumple to the ground an empty husk?
Unless those exposed organs are indeed supposed to be literal organs, in which case it breaks all kinds of canon.

As for the moc, I wish it wasn’t just black and red, but it captures the look of a rotting corpse rather well, though the bulkier limbs kind of break the cohesion of the effect.

Makuta are gaseous beings inside suits of armor, while we don’t really know how they operate their suits, I’ve always had the headcanon that it was hydraulics, given the hoses on teridax.

I would assume he would simply dissipate leaving the empty suit.

Oh wow, the organs are beautifully disgusting! Great builds on those!

Everything else is pretty great. Could use some larger feet maybe, but he looks good!

Nitpicking here, but I think essence would be a better word than body, regardless the change is definitely more canon friendly.

The snake looks a bit out of place, but other than that, this is pretty good!

I really like the legs and those intestines … they perhaps don’t fit well with a Bionicle character, but considering Wreigth as a MOC only they look pretty good.

The shoulders however… for me personally they make this otherwise great MOC look really awkward, so, since you already did two Makuta MOCs and this one looks really awesome otherwise I would ask you to spend some more time on them.

I have no idea how Kraata could be involved in maskmaking, but that aside I think you got the power of the Mask of Undeath severely wrong.

The Mask of Undeath does absolutely nothing until the wearer dies, so all of this:

However, when he tried to wear it, it forced him to keep making masks, because that was his last task. He began creating them at a suicidal rate, dying of exhaustion from making masks and creating karata.

is simply not correct.

And once the wearer has died the mask won’t keep him alive for eternity - just until he has achieved his last goal. And Wreigth’s next goal would probably have been creating another Kanohi.
The only way it could last for (potentially) eternity would probably be something along the way of guarding something.

So, overall to get Wreigth accepted you’ll have to fix the shoulders and come up with a working backstory.

But aside from the shoulders (and maybe the abdomen) this really is a great MOC, nice job!

It’s decent. I don’t like the way it looks from the back. It needs some clean-up.

Love how you added those wings to the sides of the adaptive armor Pakari. It actually made me like the mask.

@Gilahu Alright. The details I could find on the mask of Undeath were not super specific, so it’s good to have some clarification. I’ll work on the moc’s shoulders too.

Hmm… the story unfortunately still is not very good:

They threw the mask into the sea, where Wreigth chased after it, attempting to retrieve it. The Makuta stopped him

Why would the other Makuta throw the mask into the sea? Ok, perhaps as a cruel joke, but why in Mata Nui’s name should they keep him from trying to retrieve it?

I guess it would be more likely that Wreigth searched for the mask but couldn’t find it and the other Makuta began laughing at him because he spent so much effort on a “worthless” mask.

(Just to clarify it, though: The Mask of Undeath is a normal Kanohi that likely exists multiple times - Wreigth could have been the first one to ever create one, though)

He tried to combine too many powers into one mask

He tried to combine too many powers into one mask, which was based on the Mask of Undeath

I feel like this goes too much into the direction of Makuta Sachel’s and Makuta Tak’s backstories. Also I personally really dislike the idea of a “Mask of Ultimate” power in G1, given that the creation of masks is a process of which we know more in G1 than in G2 (Kanoka, power levels, etc.)

Perhaps it might be best to make Wrigth’s death as simple as possible: He tried to create an enhanced version of the Mask of Undeath and the result was a mask which simply killed its wearer. ?

Kewl. I like the use of the Ninjago snake piece, looks pretty organ-y. One problem I have is that the mask doesn’t look much like either of the masks you say he had. Some of him looks a bit messy, but he’s good overall.

@Gilahu. Alright. You got it!

Edit- New pictures! I may or may not have taken apart the moc after you told me to fix the shoulders… It’s all worked out though!

Ah, now those shoulders are way better! Although I have to say that I liked the old arms and legs better…

Only one thing I just noticed: could you add “Makuta” to this topic’s title? Just to clarify directly that this is a Makuta MOC.

Otherwise thanks again for participating!

If you like, I can still work on the Makuta.