Old Manu: Toa of Stone, probably the 5th version (I’m calling it 3rdB, I just remembered a previous version without any waist articulation that looked almost the same as this version, it was just before this one in fact. also the version names are weird bear with them, they are mainly to reflect on the type of body he had or major change made to his appearance.) I made of him, the oldest is a bit cringy, though I’ll need to find a picture and remake it so you can have a glorious picture of what he was at the beginning. 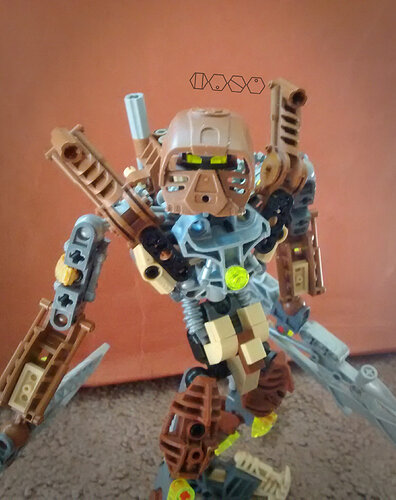 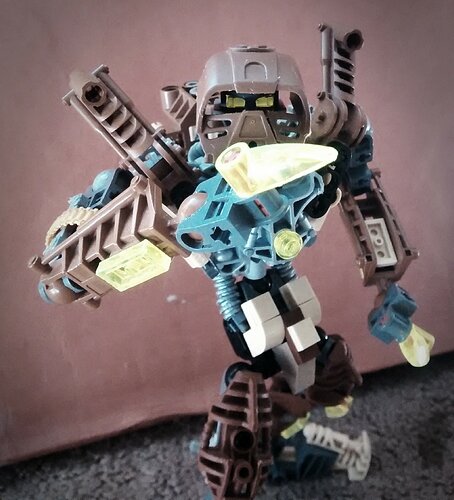 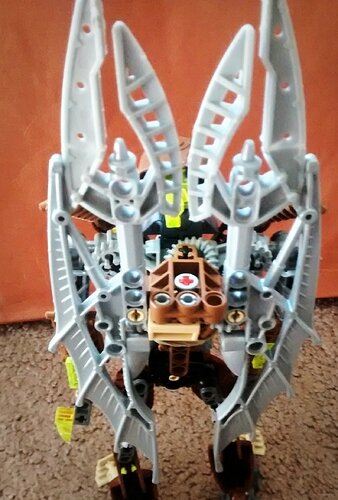 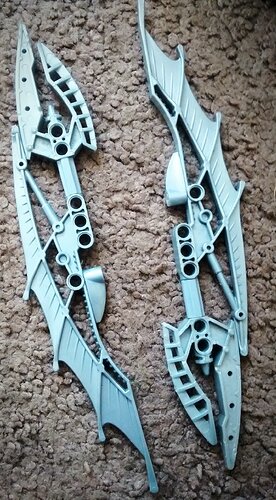 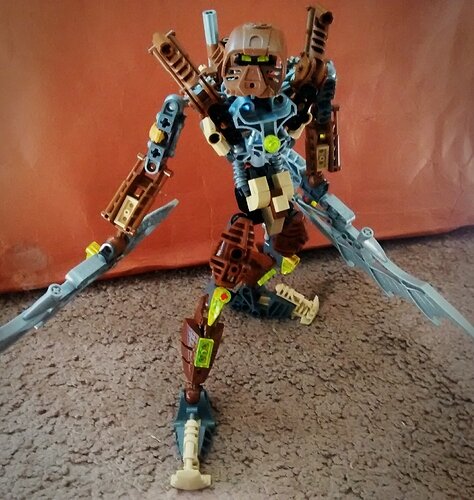 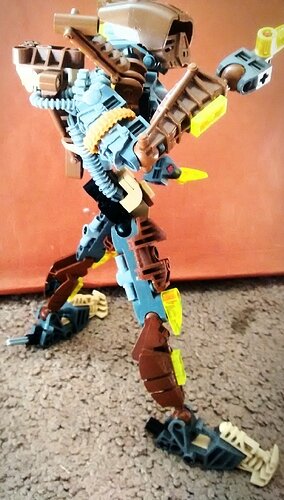 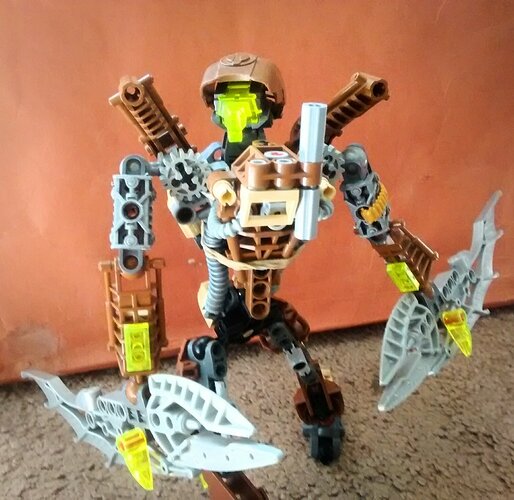 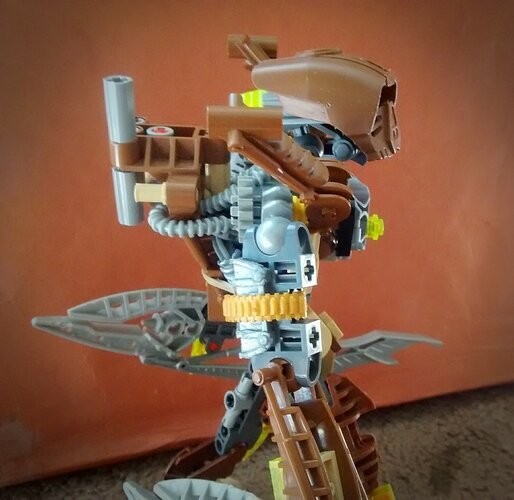 New Manu, not much changed…

New Manu, Toa of Stone, a heavy revamp using the base of the older version.

I did try to improve my photography, let me know what you think.
Here are the basic front back pictures. 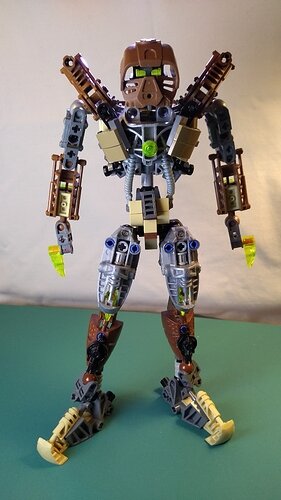 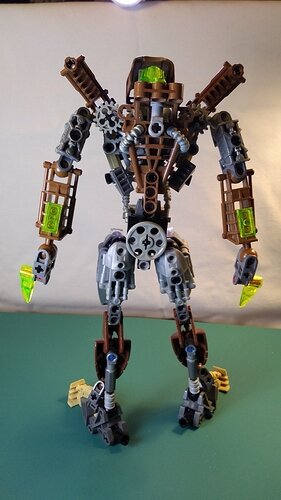 The ~fancy pictures: (2 of them are basically the same as before, IDKW I put them in, but ehh… why not?) 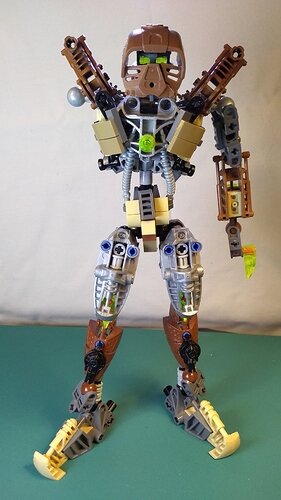 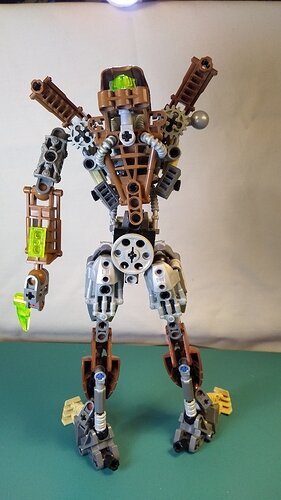 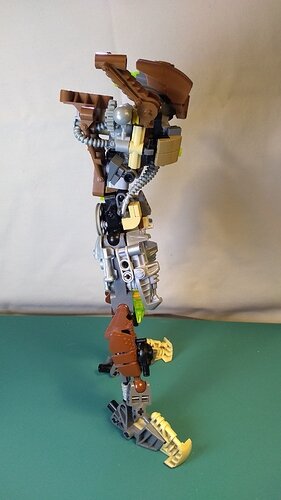 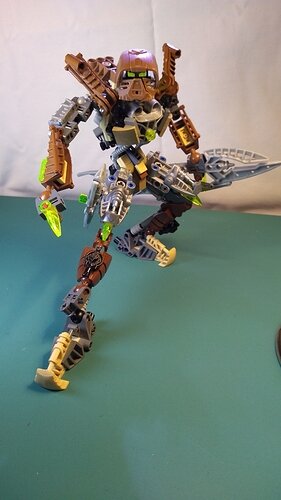 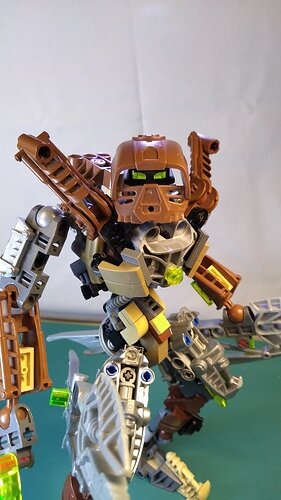 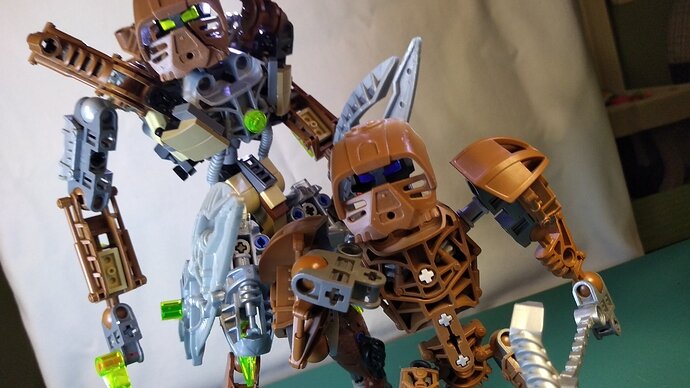 Manu was probably my first Self-MOC growing up. His story changed over the years, though parts of him remained the same. One thing Manu lost was his original name. It wasn’t Manu, I know that. A long time ago I forgot his name and had to give him a new one, so I did what I thought was best, I renamed him with a name similar to my main fictional character, Moner. That’s how Manu was named and that name stuck till now. His very first version had the golden armor chest piece from the Star sets. He had the exact same arms,except for those silver upper arm bits and he had the exact same weapons. His eyes were green, because I gave him a av-matoran body and head piece. His legs were basically Onewa’s hordika’s legs. That was the very first version of Manu… (salso he had Pohatu’s mata feet, without the extensions). I can literally rebuild that version from my mind, it was the basis for Manu’s color scheme going forwards. The second version 1stB was essentially a foot swap for the dark grey feet and tan leg extensions. I believe Manu gained the lime green claws at this point (the borok eyes), he may have gotten the silver arm on his upper arms during this point. 1stC was a toa of light version of Manu, using a kualsi instead of the mask of light. He still had the golden chest plate from the Gresh stars figure, and dark golden armor was added onto him. He gained a shield and a modified sword. (I don’t remember what the sword looked like though). 2ndA was a switch to a Inika-like body. It’s best we forget this version, it’s a nightmare to remember, (WHY DID I MAKE THE SHOULDER ARMOR LIKE!?!? WHY!??!?!?) 3rdA was my nice looking version of the inika body, it’s the previous version before the one I first posted on the boards (3rdB) 3rdA had no waist articulation, but otherwise at the time I considered him perfect… which is not the case there is no way any MOC is perfect, only a MOC which is perfect in the eyes of their creator. 3rdB was born from the desire to add an ab crunch to the figure. The rest is visible history.

Manu wan’t originally from the Iden Nui AU, he had his own AU which was much much more different then either the source material or Iden Nui. It had an alternate history and different artifacts, pretty much the crossroads for this AU was the ending scene of Bionicle 3 Web of Shadows, when they left in the blimps, what happened in this AU is Makuta attacked blimps, blimps split up, each on ends up somewhere else and on a different island…somehow…(I didn’t know Metru Nui was under Mata Nui at the time…) Time passed and a new island was formed from three different islands colliding, it was called “Yuka Nui” and was where Manu started his story as a matoran. He found the Armor of Elements, an ancient artifact which he wore on his chest. It allowed Manu to take toa form and act as the toa of stone, when the previous toa of stone died. Manu later discovered his cracked mask had previously belonged to a toa of stone that preceded him. (Onewa, also death was permanent thing, this was before I knew what the Red Star was… actually this was main based off of waht I saw in the movies and only that…). Manu was able to telepathically talk with the spirit of that toa of stone and learned wisdom from that toa. Manu soon discovered that if he wore a mask belonging to a dead to a he would be able to telepathically communicate to that toa and borrow their elemental abilities. The reason why he had Onewa’s mask in the first place was because the mask was cracked and left for trash. Manu also develops personality traits similar to that toa even parts of their appearance.

That’s basically what Manu originally was in his AU…yeah it’s something I made without much knowledge on G1 lore…so a lot of it is not really ‘correct’ if looked through a G1 lenses but I don’t care I loved that AU when I was growing up. I also may have not known how powerful Makuta were in that AU, because I basically considered them as shadow toa, but a little more bestial or monstrous…and that was it.

Well, I hope you enjoyed this little backstory on what Manu is/was. I have no idea what will come next for him though. I haven’t really expanded much on his story other than creating mroe characters for his AU.

From what I can see he looks alright.

(The images aren’t the best. Cause I used my phone and I don’t take many pictures of my mocs. I hope they at least get the general idea)

Well, a general idea usually isn’t the best if you want some critique on your MOCs. If you leave people guessing, they aren’t going to be interested.

My advice is to take pictures from the proper angles. A basic front shot, a basic back shot, maybe a side shot if the MOC needs it. A lot of the pictures here are at really weird angles that don’t really show anything of interest.

You don’t need to take a lot of pictures, just a few that show the entire MOC dead on.

(He is also my self-moc, but I didn’t think that was very important to put here)

That’s not really an issue, but I think people are generally more interested in knowing.

I have a couple critiques from what I can see. The color scheme is alright, and his weapons are really awesome, I like those.

Otherwise though, he looks pretty messy. The hoses aren’t really a good touch, and he’s got a lot of really weird parts that just stick out for no real reason like the light gray tubes on his back, the open tan pins also on his back, the random axle sticking out of the back of his left foot, and just a random Technic piece as the armor on the back of his thighs.

He also appears to require a rubber band to hold him together, which isn’t a very good attachment method.

That’s about it, he’s not bad, but he needs a lot of work. Sorry if this critique came off as harsh, but this MOC reminds me of something I would build when I first started, so I know where the areas of improvement are that are really going to improve your building skills!

Makes me want the g1 style peices to come back, but stronger and with ccbs plastic

I still wouldn’t keep them on the figure, though, at least when taking pictures. They can be really distracting and they’ll come off as part of the MOC.

From what I can see it’s alright.

Now even more so… sorry, just thinking about my stop motion series… This moc looks even better to me than when I first saw it… Great job! Though he is a bit to top heavy in my opinion. Looks off…

He’s surprisenly balanced for how he looks.
(Though right now I am in a period of updating him)

I was very inspired by Onewa (He was my favorite toa growing up), so I (heavily) based this guy on him.

I almost get a speeder vibe from the parts that stick up over his shoulder (like if that part was attached) like he would hover at great speeds over the sand. 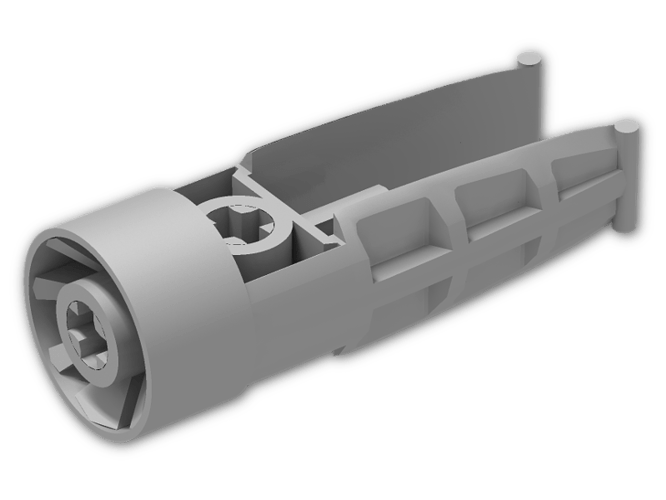 I’m going to show an updated version soon, seeing as this a older variant of Manu. like the legs were updated, same with the chest…though I still need to get to those arms…those lanky arms…ehh I’ll get to the soon enough. One thing that will change once I put the pictures up, I’m going to be adding friction adders to the upper thigh joint, for more posing freedom and more friction. The shoulders will also get friction adders, as I plan to make a heavy weapon for Manu, some time soon. It really depends when I actually get parts to do this.

Also @PakariNation99 I got rid of the old hoses, and replaced them with smaller hoses, without rubber bands, the original idea of the hoses was to invoke a image similar to the mata torso with the pistons. The smaller hoses are significantly better and look pretty cool.

Also the Update is out, I hope you guys like the new and improved Manu.
(@PakariNation99 I think you’ll like this one…)