After 2004 the color palette changed for most BIONICLE characters. Especifically I’m searching for what Lego colors that Matoran of Metru Nui should have knowing their Mata colors. So far I have these colors: 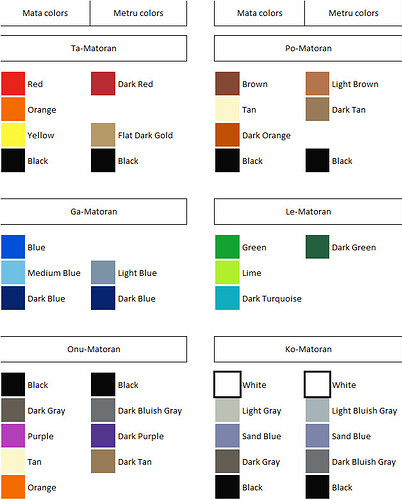 I considered Flat Dark Gold as the “Metru” Yellow, as it is one of Lhikan’s colors. Basically a Mata Lhikan would have been yellow.

Dark Blue was present on Mata Nui, so I don’t know if the Ga-Matoran are one color less, or “Metru” Dark Blue is a different color.

Any suggestions for the other colors or is there a color I’m missing?

I’ve wondered about this too, but I’m not too sure colours are meant to be much different in-universe. For all we know there could be more diverse colours on Mata-Nui than what we’ve seen in MNOG. If you want more accurate set colours though, the best place to look would be the Matoran from the Toa Metru CD’s, since they show the most variety.

My personal changes would be:

I really like those and I didn’t notice them before. Especially light blue, were some Nick Bluetooth photos shows his upper body as the same color than Amaya Metru.

Good point about Kivi. In that case, the Toa Metru didn’t have the original six primary colors in Metru form (Toa Mata Onewa would have been Dark Orange). Or maybe Brown is the Metru Dark Orange (or Dark Brown just for the sake of changing colors)

Don’t know about this one. I don’t think Orkahm with Tuuli difference isn’t big enough to argue a different color, maybe just different lighting. With Blue I must agree, since we see a Ga-Matoran with Blue and Dark Blue (although I think Blue should be a different color in Metru). 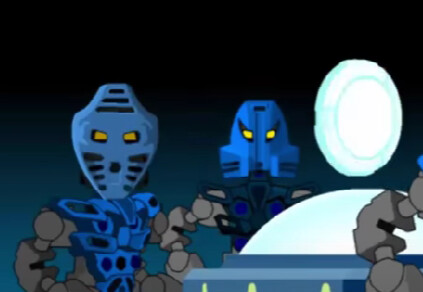 I simply have to disagree with this. We have multiple examples of those matoran colors from a multitude of media. Obviously when compared directly, the color representation will differ between different media and sources because they use different artstyle, that shouldn’t be surprising. However the colors used for Matoran are very consistent and you can always tell which colors are differentiated within the same medium and equate it with a representation from another medium. Bionicle only uses one kind of purple for armor and Kanohi, so there is no reason to invent new ones just because purple from two different sources with vastly different artstyles are not 100% identical.
The colors I listed are undeniably there. Did some Matoran change colors between Metru and Mata forms? Yes, we know some who did. But to say all or most of them had to have done so is not necessary.

Fair enough. I still think that the different colors for Metru Matoran benefit in creating their unique style, that “metallic” look that 2004 brought.

But to be fair, colors like Purple and Dark Turquoise only were used in a couple of sets in the first years of BIONICLE, so it’s hard to say that Lego would have continued with those colors for the rest of the years. Heck, as far as I recall, even Green disapeared after 2004.

I agree that Tuuli is using mata green on the CD. I believe this is an error, much like Nireta using light blue. Very possible the same thing happened with tan. With light blue, it’s less of a desaturation like sand blue (greyish), and more that it’s paler, closer to white.

We see with Nuparu that his feet are still the old grey color, not matching the limb pieces. I think the only intended change for the Matoran are the primary colors.

We do see the Le-Matoran still having lime and teal, Nuparu is still orange, Talvi still uses black cuz that is a Ko-Matoran color for some reason.

I rewatched the promos and yes, Tuuli is shown wearing Green. Misscoloring is a possibility. I have always considered that Metrutoran have less saturated colors than Mata colors (combining better with their gray limbs), so I think the colors should be different.

If it was misscolored, a Ga-Matoran should be Medium Blue (right) instead of Light Blue (left). 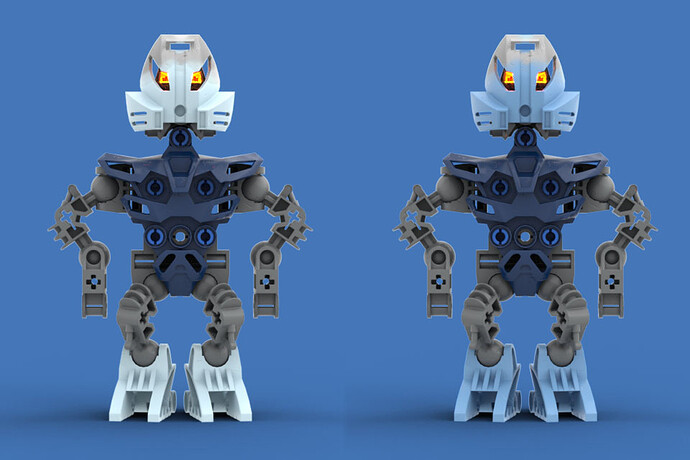 I have a theory that I explained here that Black isn’t a Ko-Matoran color.

So, light blue: The light blue color used in 01-03 is medium blue (right), and Nokama promo disc looks closer to light blue (left), pale enough that some even mistaking them for being entirely silver, much like people mistake the light grey Ko-Matoran masks for being silver.

As for black, we don’t have to look further than MNOG II’s definitions for the Matoran.

Most of them are definied as lightGray, while all the Onu-Matoran use darkGray for their grey parts. However, in the case of Arktinen and Kokkan, theirs is misspelled as lightGrey, causing them to use the default gray color (which happens to be similar, but not identical, to lightGray). Similarily, Kopeke also has a type, darkGrey - that is why he appears to use light grey. Talvi and Pakastaa do indeed use black.

I can also confirm that Matoro and all other blue Ko-Matoran indeed use the same light blue as the Ga-Matoran, with sand blue not existing in MNOG II (even though they had a distinct color in the first game…) so they’re probably all supposed to be sand blue.

Oh wow, nice finding. So Kopeke is the only one in Ko-Koro with Dark Gray (his weird color scheme only means that he is an Av-Matoran).

How did you see the color code of each Matoran?

They’re all in the same file, toaskello extracted them using JPEXS Free Flash Decompiler.
I’ll try track down what the exact file was, but it seems you can only upload images on here.

Nice. Following this, did Makani, Kumo or Sanso use a different green than Tuuli?

In MNOG II? No, for the Le-Matoran, there’s just mata green darkGreen, lime green lightGreen and teal teal (and an unused color, sea, which is the old teal from MNOG… but even so, no sand blue, as mentioned.)

As a side note, Takua actually uses the color values of “sea” in the first game and Bohrok animations. His color scheme has really been all over the place.