I don’t claim to be a great moc maker, or even a mediocre one, but this moc has definitely made me cringe, it’s not even close to what I had in mind, but lets face it, after reassembling most of my old G1 sets, I don’t have much to work with when it comes down to basic moc making, snapping Lego parts together.

As posted earlier in my Matoro, Mata Nui’s Chosen , my second favorite toa has always been Matoro. So, I was in the room where I built my Matoro moc, and saw the sad pile of parts that used to be my Matoro figure, and let’s face it, I felt kinda bad taking my favorite toa figure apart. So I looked as the small assortment of Lego Technic and Lego Bionicle parts I had left, and got to work. It’s not my best moc, in fact it’s downright terrible, but with the depleted parts inventory I had, it’s still bad, even for my standards. I spent 15 minutes on it trying to rush this moc out and well, I payed dearly for it. It lost most of what made Matoro, well, Matoro. This “revamp” if you could call it that, is mostly and experiment in how I can attach parts together and how I can make them more stable, while at the same time, trying exceptionally hard to look like the Toa of Ice we all know and love. 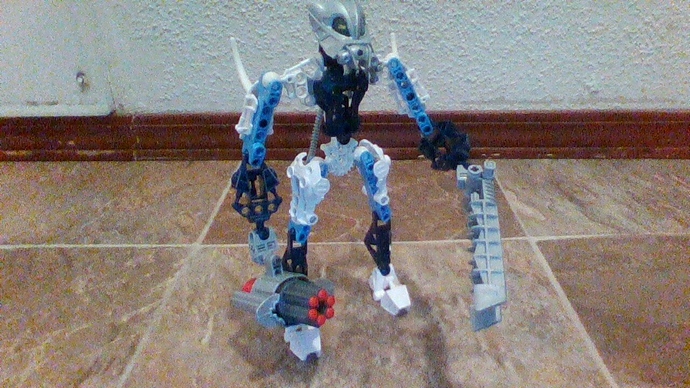 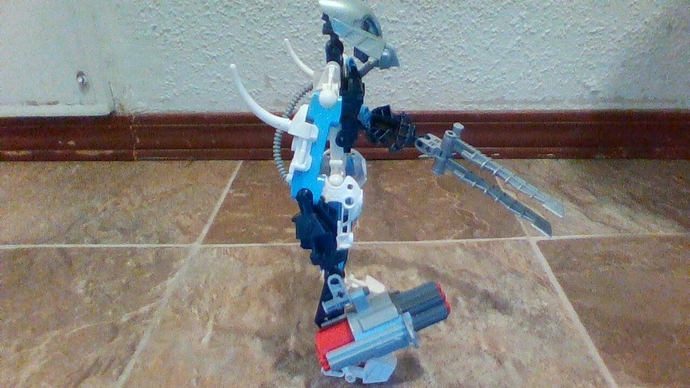 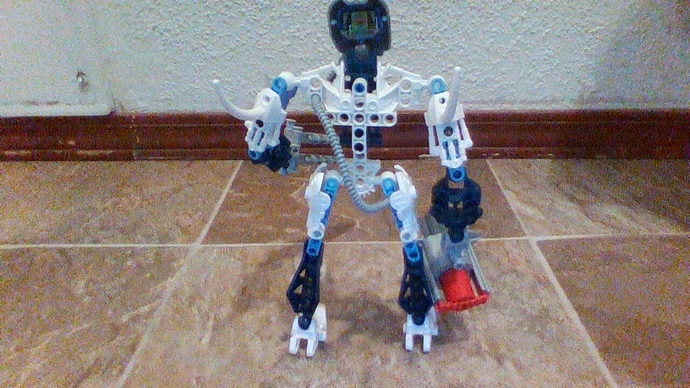 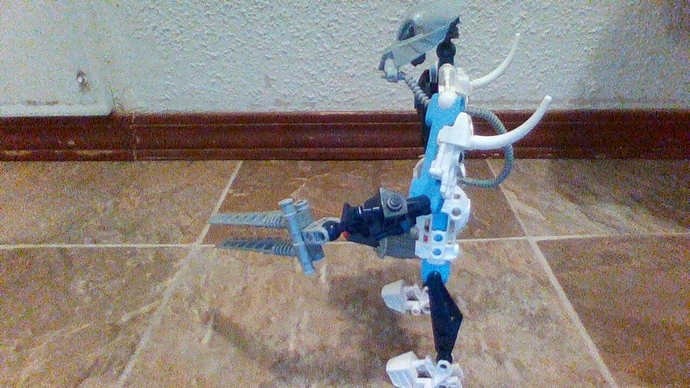 So there we have it, My revamp of Matoro Mahri. Let me take the time to explain that even though I like the character of Matoro Mahri, I absolutely hated the build experience, I mean, just look at the pictures of Matoro Mahri, the arms were uneven, the dual claw was pretty useless unless you moved the hand and then you couldn’t pose it in any other position, and the color scheme was awful (although I somehow made it worse), not to mention Matoro got the short straw and became the token hunchback for the wave. I fixed the claw by allowing it to pose independently of the hand, although it was a bit to large, and anchored the Cordak Blaster to the hand because the friction of the connector has worn off with time, which is something I am proud of, because it adds some much neded stability whilse still keeping the attatchement slim. 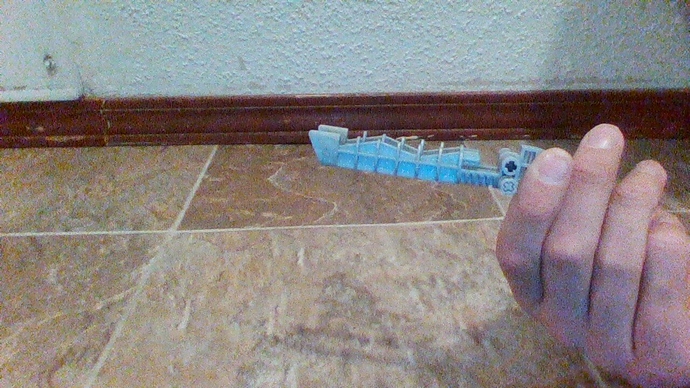 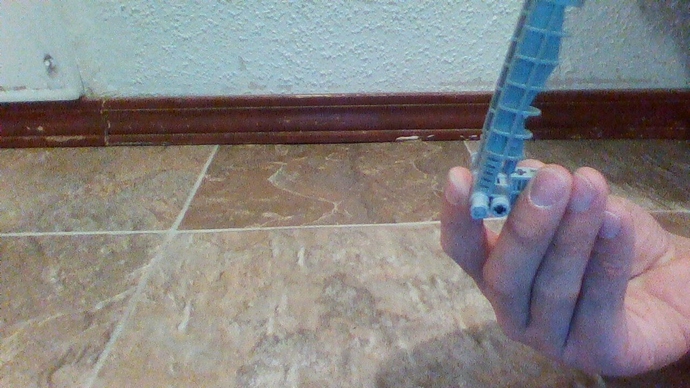 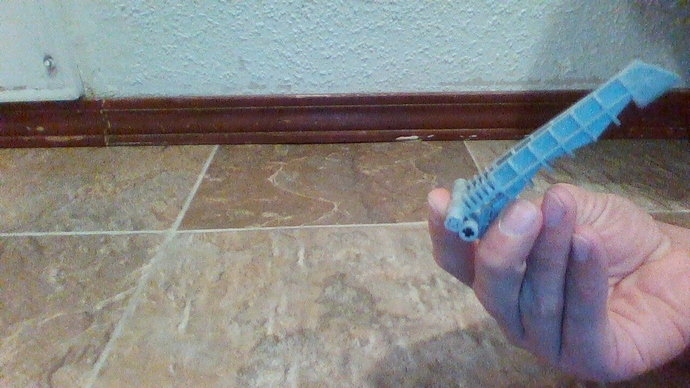 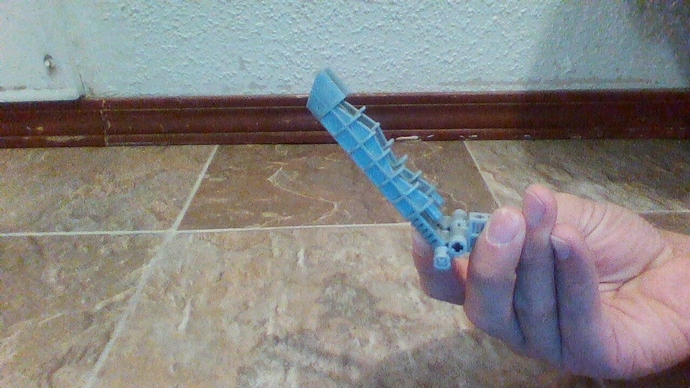 There is a nice look at how the claw can articulate separate from the hand’s articulation. 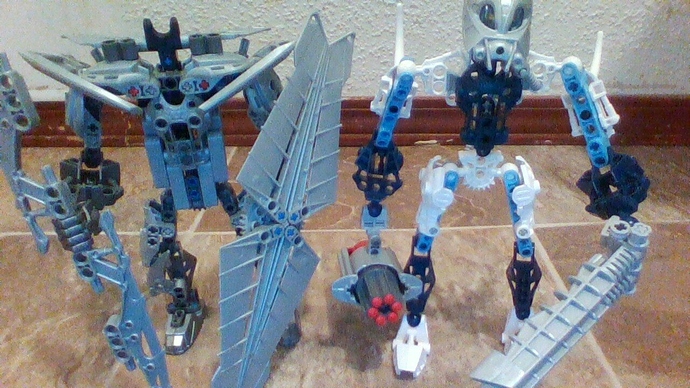 Due to the fact that I only have one Matoro Mahri Figure I cannot have the Tryna on both figures at the same time, so the height comparison is a little wonky, needless to say, the moc with the custom Torso is a tad larger.

*NOTE: In this build I intentionally avoided any connections with red and blue pins, after cluttering Matoro, Mata Nui’s Chosen with them.

It sort of feels like it took away what made the set unique and replaced it with a rather generic build.

While I respect your opinion, I kinda hated the Hunchback aesthetic after seeing Matoro without that feature in the Toa Inika wave. but after looking at it, I do agree that the build is rather generic, but I did only spend 15 minutes on it

To be honest, if I could have built this version of Matoro similar to my other version: Matoro, Mata Nui's Chosen. I would have.

This seems like such a downgrade from the original set. He looks generic, the color scheme doesn’t work well, the new claw looks pretty oversized, and it’s just a mess in general.

yeah, I’m not that happy with this build but I may use the claw design on my other version.

I agree with what the people above are saying. There’s not much to say about the moc. However, you do have the potential to combine this figure with your previous figure to try and make a better version of the previous figure. You had something there.

Other than tweeking color schemes or trying to modify the torso later down the road, Not much will happen to the other Matoro. I wholly consider this Matoro a flop and plan on deconstructing it and making some other moc, hopefully using the claw design better.