Now, spoiler alert we all know Matoro died in the story. As Matoro was my second favorite Toa of all time (Kopaka is my favorite), I decided to revamp him today while I was looking at my bionicle display, I took a look at my very small and pathetic parts supply and looked at my Pohatu Nova (from the Rockoh T3) and looked at my Matoro Mahri, and had an idea. A few weeks ago I built a self moc in which I made a custom torso, being as how I had no more Inika build torsos. and to make a long story short, I loved it. Unfortunately I took it apart to make a custom monster moc (I really need to start posting these things to the message boards so I can remember how to build them) so I had to start from scratch. So while it isn’t the Non-Inika torso design I loved so much, it follows the same principle, and while I am not as pleased with it as I want to be, it’s all I could do with the limited parts I had. This limited parts selection led to me committing one of the deadly sins of bionicle moc making, using red and blue pins/axles. I sorry guys, but again, limited parts selection.

Now for the backstory for this new Matoro before I go into the new build I made for him. Since I want Matoro to be resurrected without using his Kanohi Tryna or using the Red Star, I decided on Mata Nui liking Matoro as much as the fans did, and as such, resurrecting him as his chosen warrior. Matoro has changed elements and is now a Toa of light. While still having the Tryna, he has none of the other powers or abilities of his previous iterations. He now can fly and also basically be a stereotypical Toa of his element. His new weapons can morph into two swords, a staff, a shield, a set of wings, and his armor also has two backup daggers.

Now that I have psyched you up for it, let’s see Matoro, Mata Nui’s Chosen.

This is him in “Flight Mode” 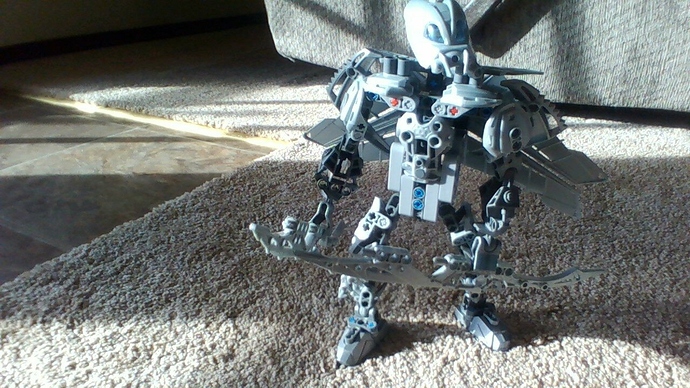 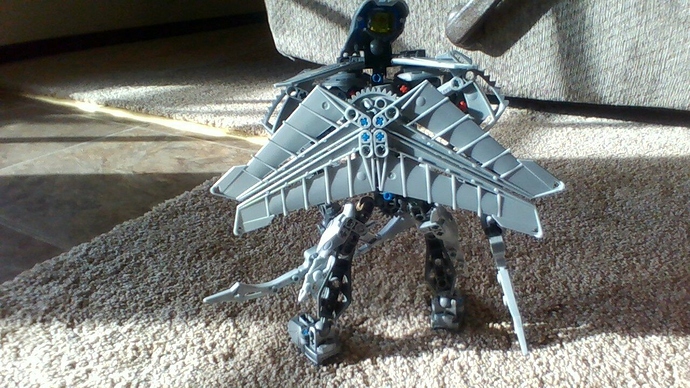 This is him in “Combat Mode” 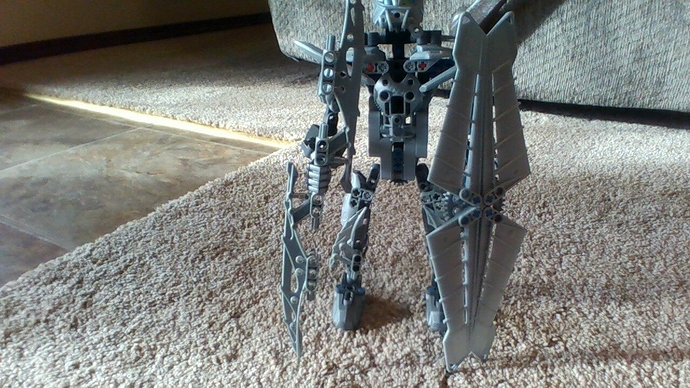 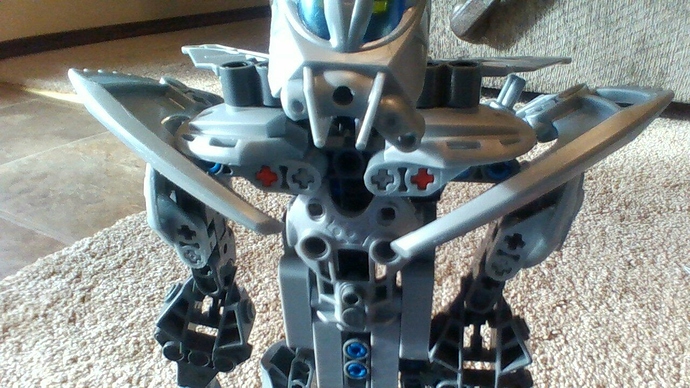 The front has changed quite drastically, the two swords have morphed into a dual bladed staff quite similar to that carried by Kopaka Nuva. The flight pack has turned into a shield, and another thing that has changed is that the two Kirop Claws from the non flight pack wings now wrap around the body just above the arms. 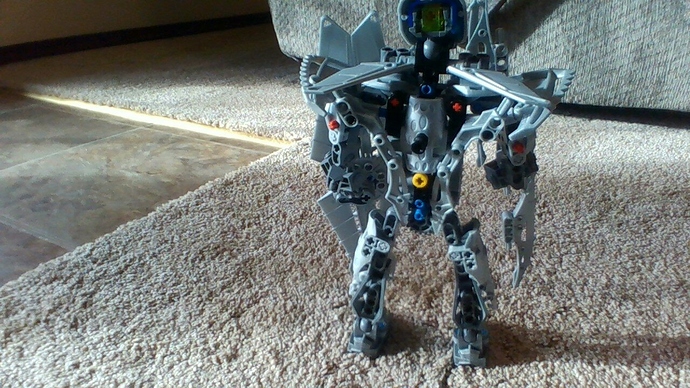 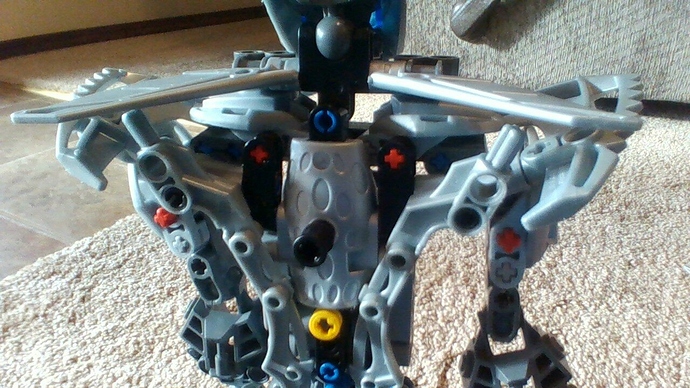 Pretty much the only thing changed about the back is that the shorter blades from the “Flight Mode” sword now make up part of the back here. The back on the “Combat Mode” version really brings into perspective just how limited my parts selection is after rebuilding most of my old bionicle kits, what with the blue and red pins/axles and all. Also, quite sadly I ran out of gray half size cap pieces, so I had to use that ugly yellow one. I know that doesn’t bother some people, but it bothers me, to me it ruins the aesthetic of the Matoro I was going for.

This is simply the “Last Resort” Matoro 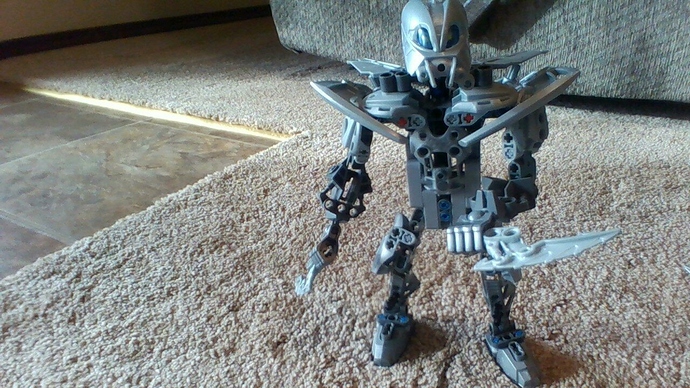 This final version of Matoro has none of the trans-morphing weapon build I have used up till this point, having removed them from the constraction figure as a whole, instead the armor on the shin has been removed to be used as two daggers.

Overall I really like this Toa, as much as I dislike a few design choices I was forced to make. Needless to say, if I could do it all over again with a better parts selection, I definitely would have. But for all intents and purposes, with Bionicle being officially dead (unless the red star flies over the ashes of G2), I probably won’t be updating this Matoro figure much, if at all. Hey, if it ain’t broke, don’t fix it.

Thank you for your time.

Only major gripe is the blockiness of the pelvis/chest. Try to fill those up with something other than the liftarms, and you’ll be set.

Like I said, I was exedingly low on parts, literally all i had were lift arms XD
Thank you about the flight pack.

This is a cool MOC tho

and yes i know you were low on parts

I believe I already confessed to that sin. PLEASE FORGIVE ME GOOD COMMUNITY OF MOC MAKERS!
But anyway, I hate using red and blue pins, and If I had the parts available I would have done that differently, to be honest I would have made this moc quite differently. My idea for Matoro’s final form is sadly not realised by this moc. I envision a 3 foot tall custom Toa sculpt with a custom Tryna, but eh, this guy will do, I guess.

You absolutely have a creative design in the running; the MOC itself is actually pretty solid, with the exception of the aforementioned liftarm waist; however, you would probably attract more critical and positive attention if you took your photographs in better lighting. Your building skills are certainly up to par.

But for all intents and purposes, with Bionicle being officially dead (unless the red star flies over the ashes of G2), I probably won’t be updating this Matoro figure much, if at all. Hey, if it ain’t broke, don’t fix it.

After the Red Star broke, it only “resurrected” individuals as twisted, malformed versions of themselves. Don’t wait for TLG to do that to Bionicle! We keep it living ourselves, as the guardians of the stories that we admire and love.