Hey, anyone remember this?

It’s been a few months, but these reviews I mentioned will finally be starting today. Exo-Force won the poll by quite a large margin, so we’ll be kicking things off with the two smallest sets of the 2006 lineup: Uplink and Sentry. 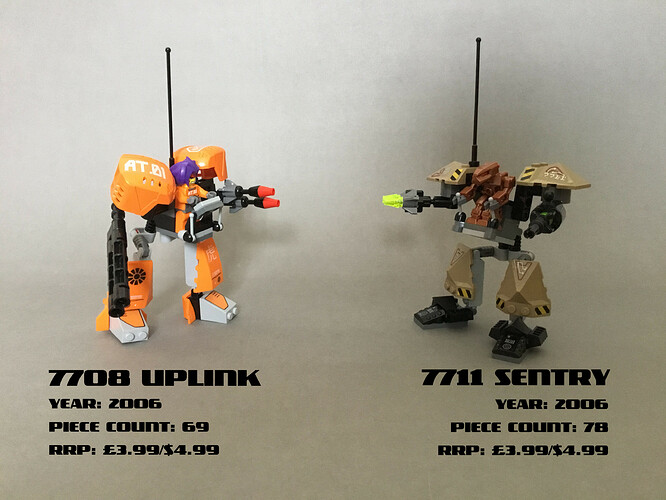 Exo-Force was the only original theme introduced in 2006, running alongside the already established Bionicle, Racers, Vikings and Clikits. The first wave contained 8 total sets: two small support mechs, four regular sized mechs and two larger sets of various different types. This pattern would continue for most of line’s run, with the only exception being 2008 when only three regular mechs were released, with the fourth being cancelled late in production for no discernible reason.

We’ll start these reviews with a look at the support mechs of 2006, starting with the figures. 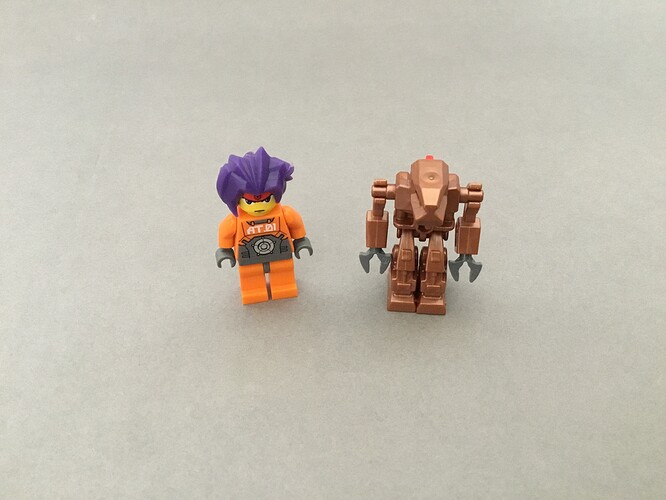 Exo-Force was quite a departure from what people were used to with minifigures, in terms of both the humans and robots. The Uplink includes one human character, Ryo, the Exo-Force Team’s mechanic, while the Sentry includes one of thousands of mass-produced Iron Drones. 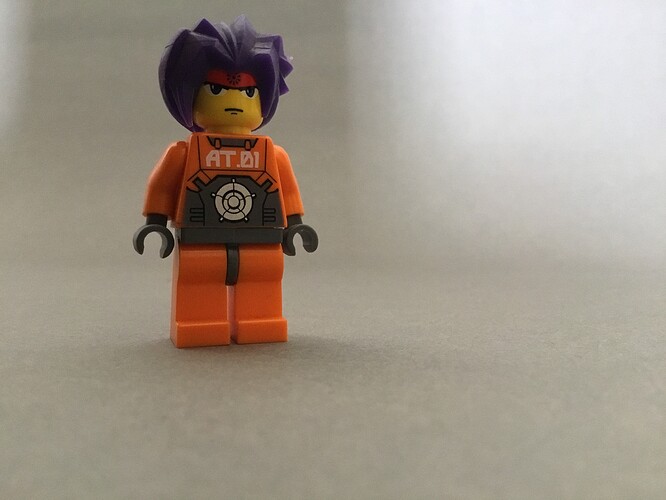 Ryo himself is a fairly simplistic minifigure from the shoulders down - no leg printing, no back printing, only a single print depicting armour on the front of his torso. It is a nice print though, with the centre of the grey stomach area being coated with a shiny silver finish. He’s also got a seemingly random combination of letters and numbers on his chest: AT.01. We’ll come back to that later, it does actually have meaning. 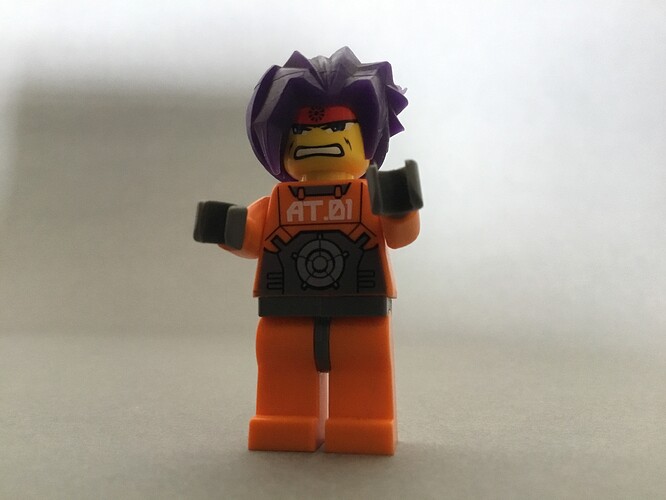 But regardless, once we get past his neck the mundaneness of the figure is completely lost. Ryo’s face is printed in a completely different art style to regular minifigures, with much more detailed eyes than usual. They’re sort of like the Clone Wars figures in that respect, only a bit less uncanny. Personally, I think the style change works, although I can see how some people would be opposed to it. Exo-Force was the line that normalised double-sided heads, and as such all human figures includes both a neutral expression and a angry one, with this one often being the one used on the box. In Ryo’s case, his ‘angry’ face isn’t as
furious as some of the others, but it still gets the point across. 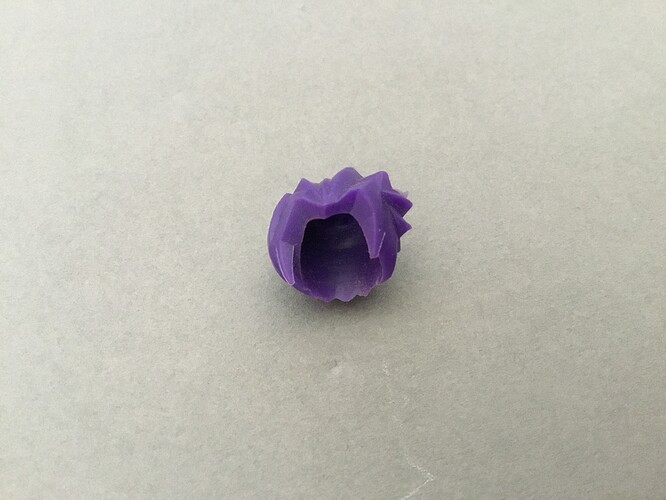 And on top of that head is a giant, stylised, spiky, rubber purple hair piece. Exo-Force was the first theme to include hair pieces made of rubber, and as such they haven’t been completely perfected yet. For one thing, these hair pieces are often extremely loose on the figures heads, forcing you to have to firmly squeeze them before attaching them to improve their grip. 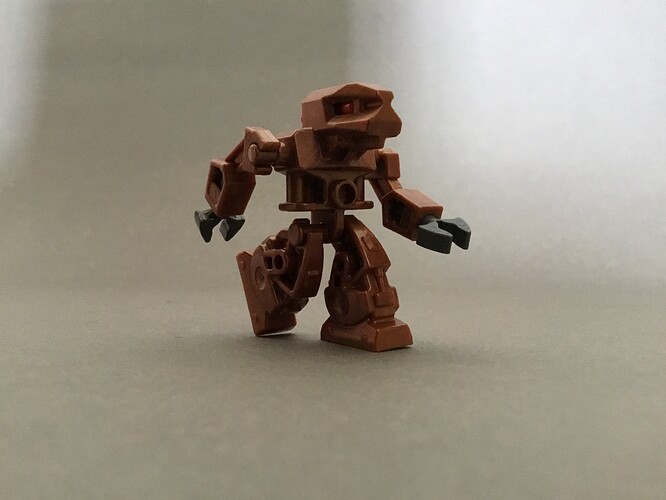 The Iron Drone, on the other hand, is an entirely new figure, with the only returning parts being the claws and eyes. 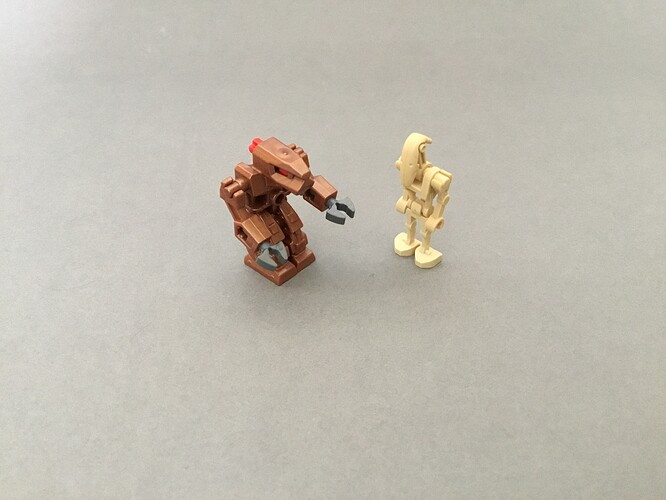 It’s an evolution of the B1 Battle Droid, featuring similar connections but being much more imposing. It takes the concept of the Battle Droid but improves it entirely, adding independent leg articulation and a full wrist rotation, only lacking a neck. These robots can stand extremely easily due to having a 2x2 footprint, and are also four studs wide, further adding to their intimidating design. Their torso piece also features many more connections than necessary, including a stud and two extra bars, adding to the versatility of the piece. 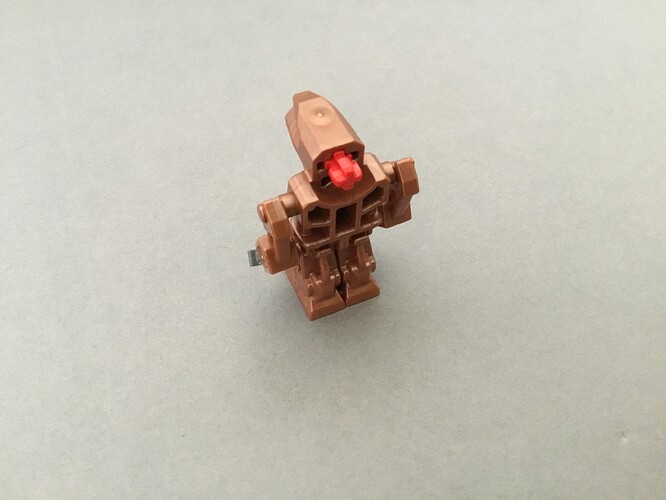 The robot’s eyes are represented by a single red axle, so you can change their eye colour for black or white if you have the pieces. 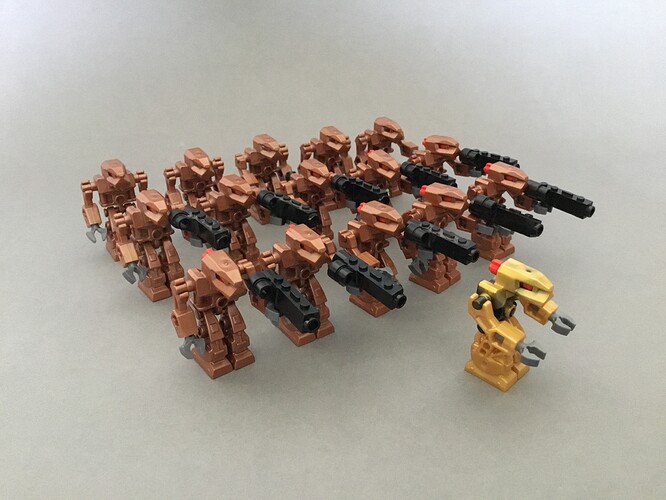 Iron Drones are also easily the most common of any of the robot types, meaning you can amass a sizeable army with only a few sets. They’re really ideal army-builders, especially since you can still find them for cheap on Bricklink.

But enough about the figures. Let’s have a look at their mechs. 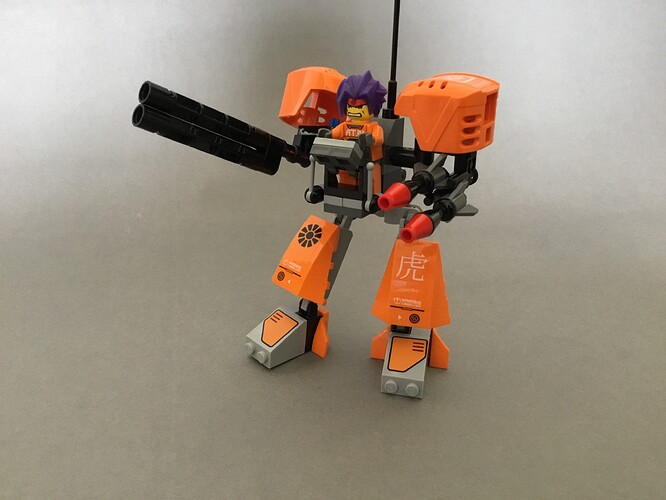 The Uplink has a fairly striking design, especially in the huge shoulders, orange recolours of the hockey helmet. It’s not the biggest mech ever, but it’s certainly well armed. 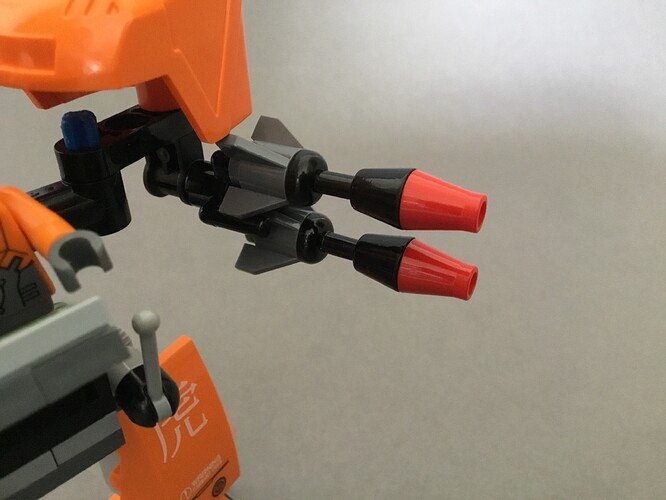 On the left arm, we find two large missiles, ingeniously incorporating a goblet piece into the design. They’re held on by a black lantern base, another great parts usage. 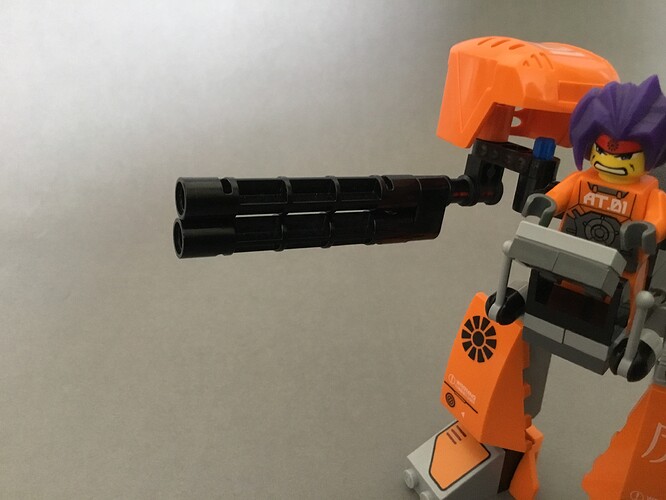 The other arm sports a large double-barrelled cannon. While this weapon design may seem fairly simplistic today, at the time this was revolutionary. The parts used as barrels are black spiral staircase columns, which, before then, hadn’t been used as anything except… well, spiral staircase columns. Whoever came up with this parts usage must’ve been pretty proud of their design, because this part is used as a gun in 8/12 of the 2006 sets! 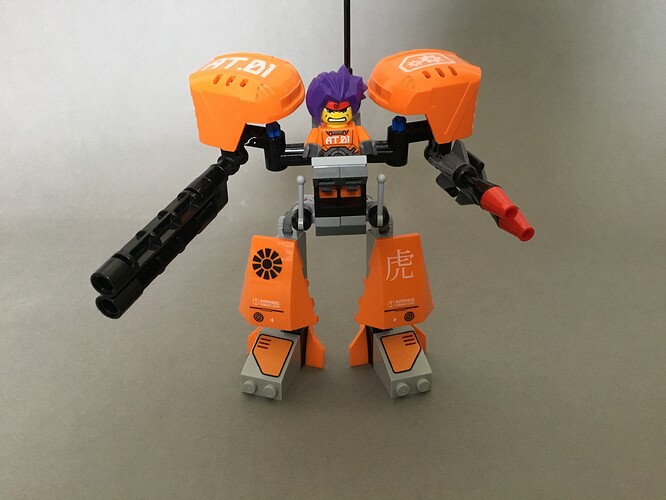 These weapons attach directly to the mech’s shoulders, which… yeah, aren’t the best. They’re really hollow and stringy looking below the hockey helmets, but they articulate well enough. 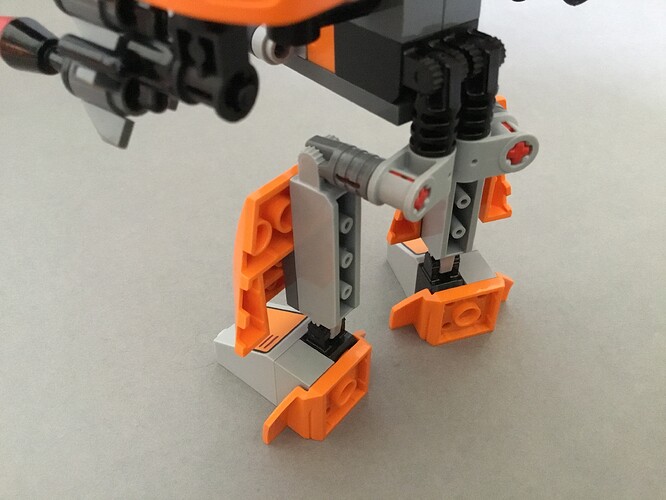 Speaking of articulation, let’s take a look at the legs. The articulation here does suffer a bit since Lego hadn’t created joints small enough to support mechs this size yet. We obviously have Mixel joints now, but back then they had to rely on standard click-hinges. It’s certainly not the best, but it isn’t bad either, and there’s just enough swivels and hinges in these contraptions to get some decent posing out of it. 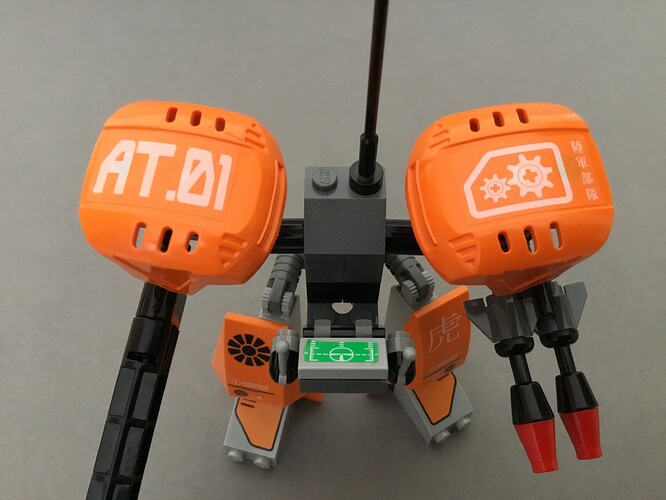 Ryo gets two levers and a targeting screen to control the mech with, although, admittedly, he can’t actually reach the levers. We also see that ‘AT.01’ again, accompanied by a picture of some gears. Well, as you may have guessed by now, AT stands for ‘All Terrain’, which is precisely what the Japanese text next to the gears translates to; ‘All Terrain Unit’. 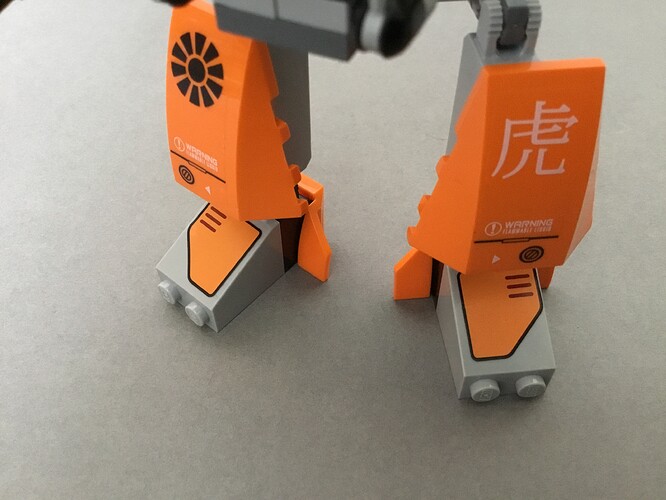 The legs feature similar details, including Ryo’s logo on the right leg and some more text meaning ‘Tiger’ on the other. Two fuel caps are positioned further down, a feature shared by all human Battle Machines, alongside a warning label. 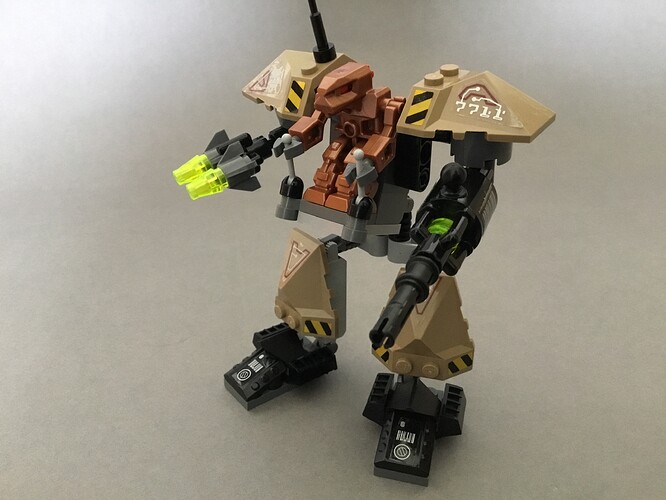 The Sentry takes the design of the Uplink and greatly improves it. Gone are the weird stringy shoulders, replaced by muted, angular plating covered in circuitry patterns. The robot pilot is much more exposed than Ryo was, as, realistically, it wouldn’t need as much protection to begin with. 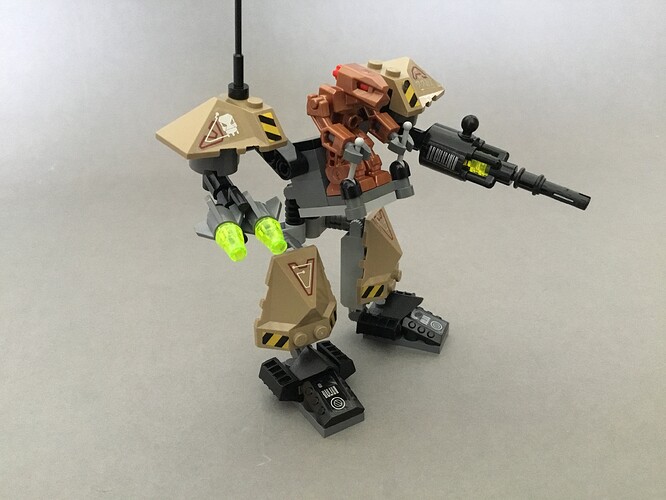 The shoulders are fully articulated, featuring a second joint allowing for many more poses than the Uplink. 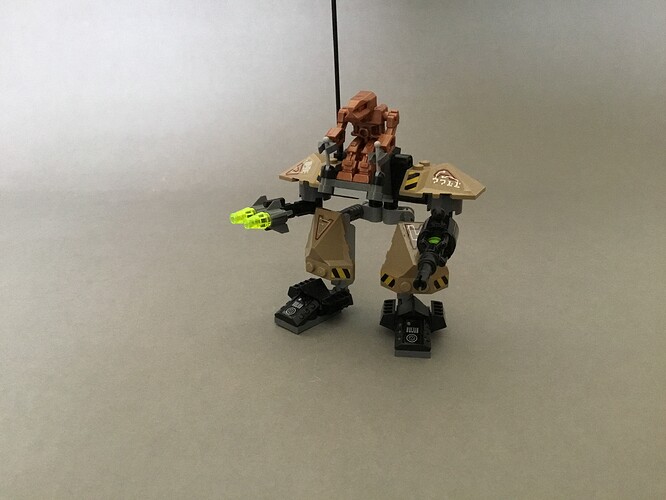 You can even bring them all the way down if you want to, though it does look a bit silly. 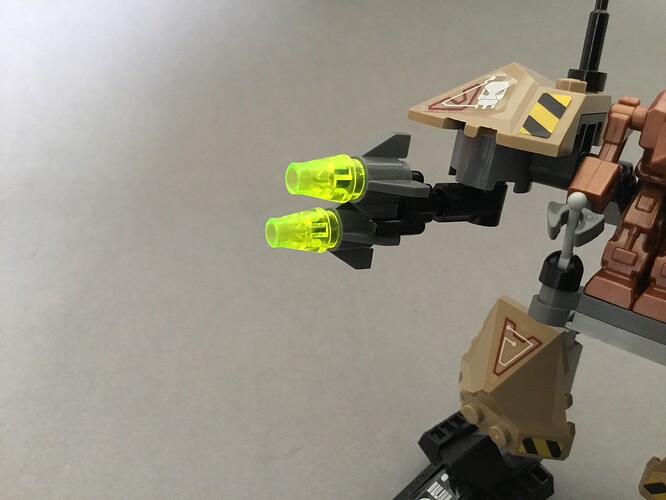 The Sentry also carries two missiles, but they lack the goblet used on the Uplink. Additionally, they occupy the right arm as opposed to the left, mirroring the Uplink’s weapon loadout. 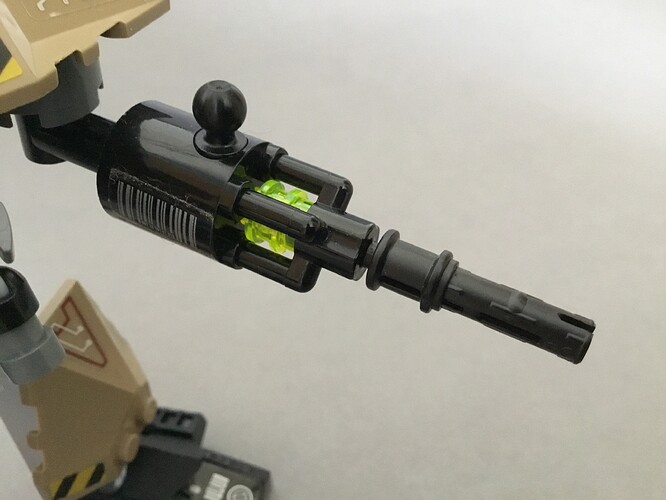 As such, the left arm features a very well-designed gun, taking full advantage of the hollow studs on astromech bodies. 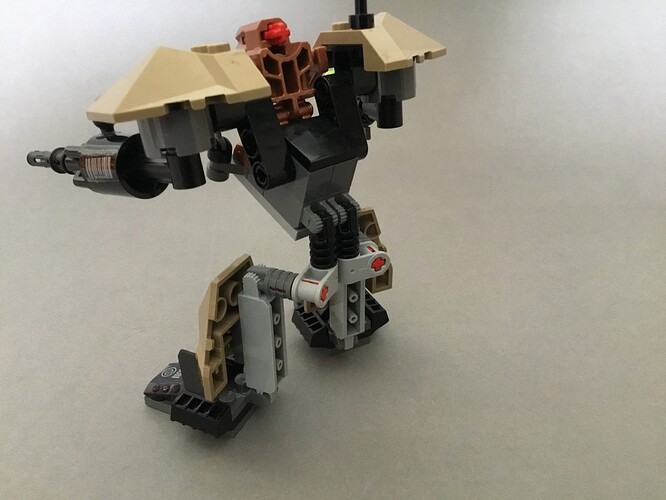 The legs of the mech are almost identical to the Uplink’s, even down to colour choices. The only difference is the armouring, which is now much more angular and industrial. 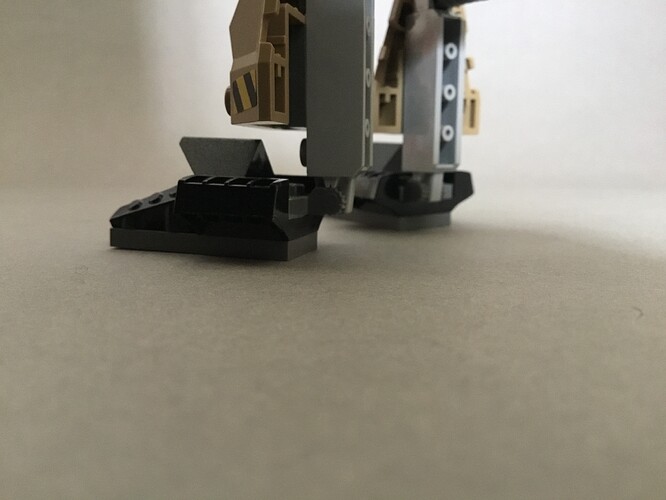 The feet are also much spikier, but unfortunately at a cost: they now lack heels. This unfortunately makes the Sentry a bit difficult to balance, but it’s not appalling and is hardly a deal-breaker. 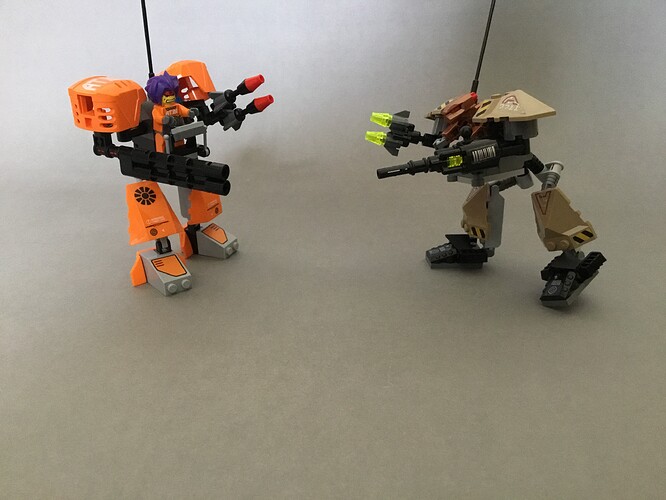 With the actual builds out of the way, let’s take a quick look at the price. These retailed for £3.99/$4.99 each. That’s the same price as one of today’s collectible minifigures. The value here is absolutely astounding, as is the case with most of Exo-Force’s sets. These two have roughly doubled in price on the aftermarket, with both now worth £8/$10 on sites like Bricklink. But, even with this price increase, I’d still recommend them. They’re great little sets, and a perfect introduction to Exo-Force if you don’t have any sets yet.

I’d rate Uplink 6/10 and Sentry 7/10 overall. They’re both severely hampered by the janky leg articulation, but Sentry just edges Uplink out on account of the impressive shoulder movement.

Well, that’s it for this review. 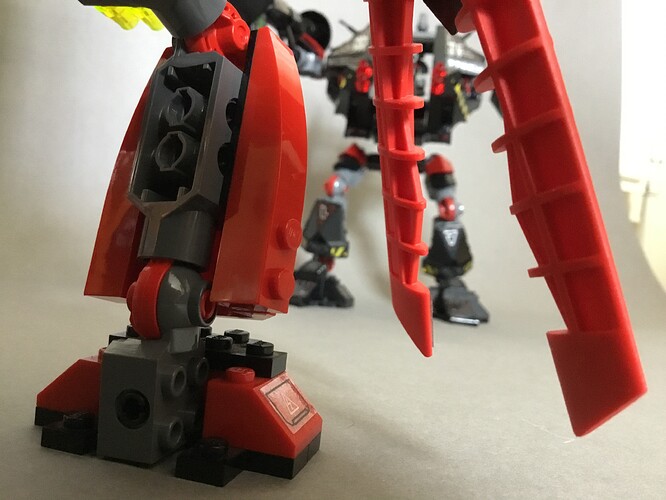 Nice. Your reviews are so detailed.

After reading this review, I now suddenly feel an urge to start army building Iron Drones, lol.
Great review, keep it up!

Oh yeah, I had these guys… the only exo-force I ever owned

My younger brother got the Uplink for Christmas back in 2006 and he really liked it. This and the Cyclone Defender were the only Exo-Force sets we ever got. Unpopular opinion, I never liked the humanoid mechs in Exo-Force, they always looked too flat to me in terms of their torsos and limbs and you can’t pose the mechs very well because of their Galidor sockets. The concepts and ideas behind these mechs are great, but the execution was flawed.

I had most of these back in the day and my favourite was always the Sentry. Very in-depth discussion and break down, great job Im really looking forward to the next one

These two sets were the only Exo-Force sets I had as a kid, and I played with them for HOURS. I just loved Exo-Force so much.